Andro Dunos II is a horizontally-scrolling shoot ’em up from Picorinne Soft and it really highlights what an usual time this is for the indie games market.  You see, the original Andro Dunos, itself also a shoot ’em up, came out in 1992 as a Neo Geo game.  It’s not particularly well-known and had something of a mixed reception in its day.  And despite our many hours spent messing around with MAME (the arcade emulator), it’s one that we somehow never played.

So before trying out Andro Dunos II, we fired up the original and yeah, it’s okay.  It’s a fairly tricky game that feels comparable to something like R-Type in terms of its overall style (although its use of different weapon types were more like Hellfire in that you can switch between them and power each one up individually) but for a game that came out five years later, it’s all a bit unremarkable.  It was solid but didn’t seem to have any original ideas and it wasn’t exactly eye candy either. 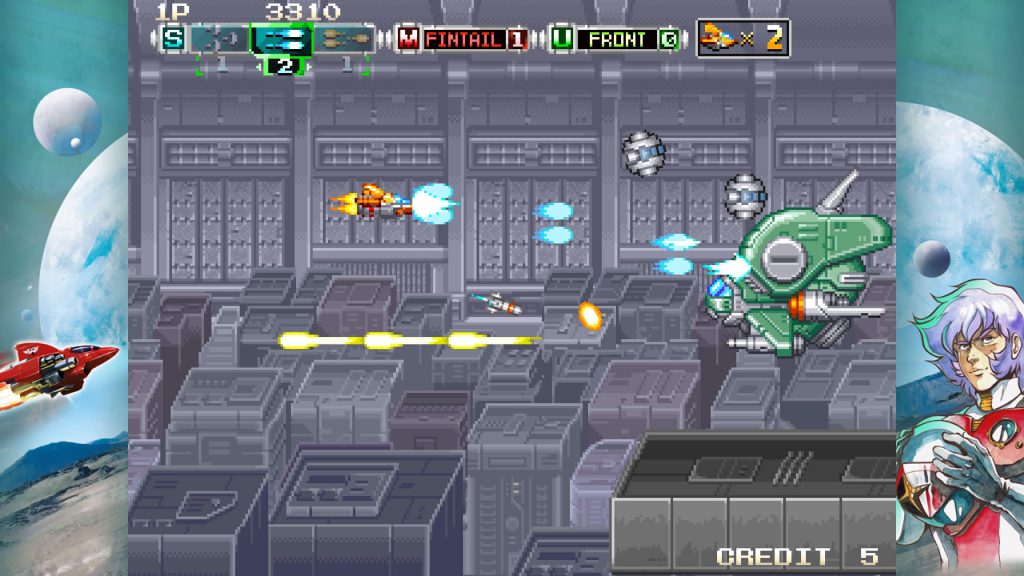 So for that game to suddenly get a follow up some thirty years later is kind of crazy.  But here it is on PS4, PC, Switch and apparently the Dreamcast and 3DS!  What a time to be alive!  Upon firing up this game, it feels as though this could easily have been an arcade port itself.  From the similar intro to the overall visual style, this looks just like its coin-op predecessor.  The ship, the backgrounds and the enemies all fit the original game’s style and once you start playing, it all feels very similar.

There are differences though.  Instead of the original game’s R-Type-esque tap or charge fire button, here you get to rest your thumb on there and let the auto-fire do its thing.  There’s no longer a charge shot and that’s fine because the game doesn’t need it.  Also, the analogue movement of the left stick felt a bit more accurate and comfortable than playing the first game on an arcade stick. 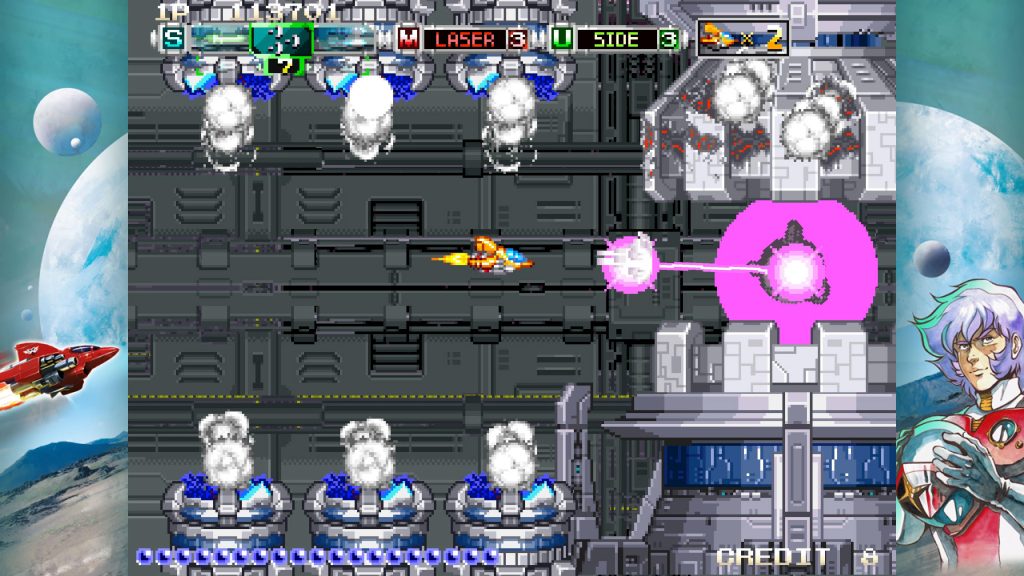 Your other fire button is used to temporarily boost up your firepower, unleashing a barrage at your enemies.  However, once it finishes, your regular weapon will then be weaker until the whole system recharges a few seconds later.  This is a great way to give you unlimited access to that upgraded shot while ensuring you aren’t overpowered.  It’s a nice system.

As with the first game, you can also switch your weapon set on the fly too.  There are four types of primary weapon and each of those have two additional modules/missiles also.  So if you’ve got a screen full of weak enemies, you’ll want to use the spread fire (which also has above/below shields and vertically-firing lasers), but if you need to focus you might want the forward firing dual cannon (which has an air-to-ground missile and forward-facing shields) or railgun (which has rolling shields and a homing missile).  The final configuration adds rear-firing too which means you are, in theory, ready for anything. 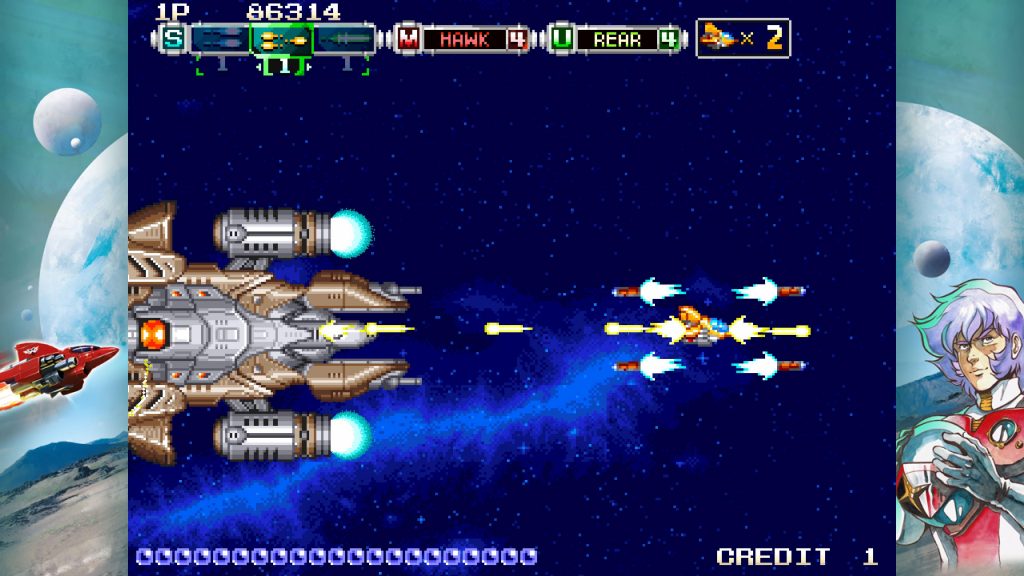 We like this system a lot.  One of our pet peeves is when your choices leave you unequipped for part of a game which then means they become more about memorisation than reflexes but Andro Dunos II has the right balance in that regard.  It’s a very cool system that gives you a lot of flexibility although you do upgrade each weapon separately, so it’s tempting initially to go all in on one type which then does limit your options a bit later.  Also, you only see three of the weapons in the top of the screen which makes selecting them a little less intuitive.  That’s a very minor niggle though.

The game offers seven stages which are all pretty standard.  You’ll face off against rows and crowds of little enemies, slightly bigger ones will show up now and again and then each stage is topped off with a boss battle.  The stages are pretty easy to get through (although some enemies can be fast and unpredictable, leading to some unexpected deaths) and the difficulty does tend to lean heavier on the bosses.  The latter stages of the game can be pretty taxing too.  Thankfully the game offers three difficulty levels and the option to add more credits.  Which we did after our first go. 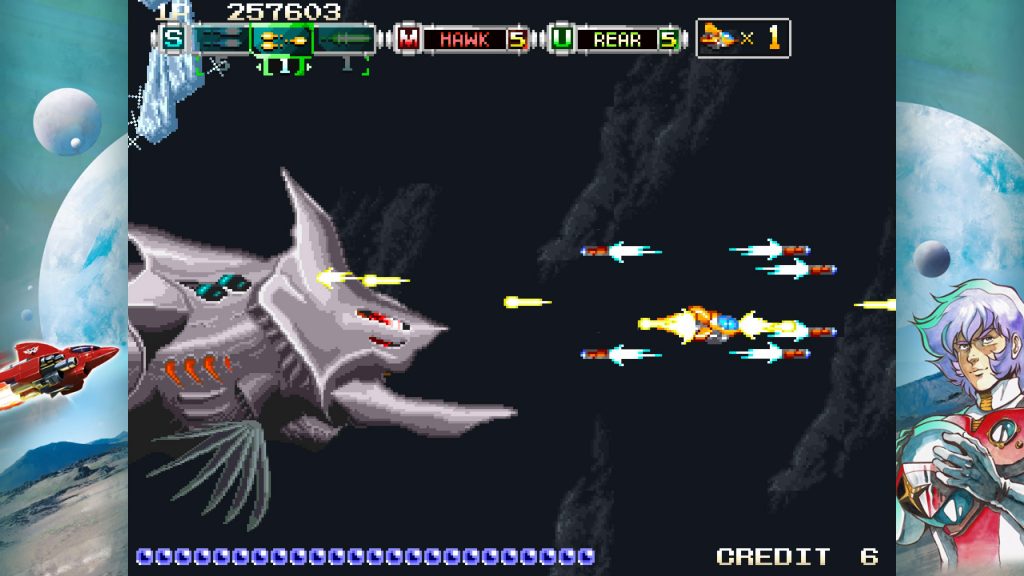 Where the game lets itself down is in the options.  We’ve seen a few obscure shoot ’em ups arrive on PSN recently such as Gynoug and Gleylancer and so it’s really odd that this game doesn’t include what are basically standard options, such as being able to add scanlines or pick from different bezel art.  Instead we’re stuck with no scanlines and some ugly art on the side of the screen.  There are no aspect ratio options either and the button mapping is oddly inflexible, giving you four set options for the two fire buttons and no way to move the weapon selector buttons off of the shoulders.

There are no online leaderboards (which is a pretty shocking omission for a shoot ’em up in 2022) and, while we’re complaining, we’re surprised that they didn’t include the original game.  What better way to give Andro Dunos II some context for those of us who never played it before. 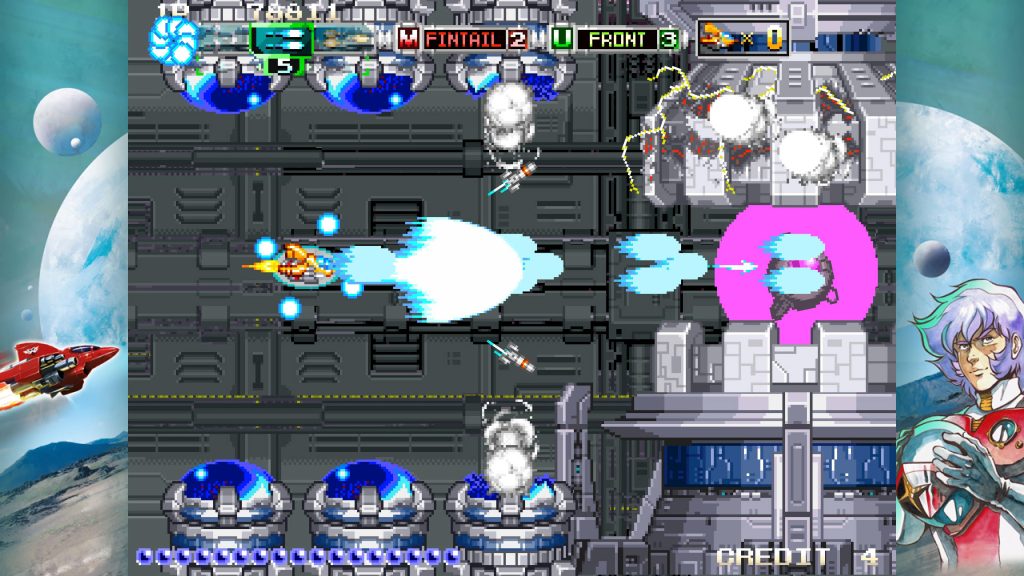 But what you do get is some tightly-crafted gameplay that’s so authentic to the arcade experience that we still can’t believe this isn’t an unreleased title from the ’90s.  You also get some well-detailed sprites and backdrops that may not be the best the genre has to offer but do at least add to the authenticity.  And you get some great music too from industry veteran Allister Brimble.

We’re not sure how essential Andro Dunos II is though.  Fans of the original will love it as will Neo Geo enthusiasts.  Even in the ’90s this might not have been the most impressive shoot ’em up and so thirty years later, it probably won’t win over too many new players but it is enjoyable, compelling and such a weird release that we can’t help but like it.  If they can just add a couple of options to the menus, this could be even better.

Andro Dunos II
7 Overall
Pros
+ Unbelievably authentic coin-op feel
+ Good action and solid controls
+ Well thought out weapon choices
+ Decent music
Cons
- Lacking in options
- A little ordinary
- Visuals are quite dated
Summary
Andro Dunos II is the sequel we never expected but it does a great job of looking and playing exactly like an early '90s arcade game. Shoot 'em up fans should give it a go and fans of the original will not be disappointed.