Royal Frontier is a strategy game from prolific Canadian coders Woblyware and it comes to us by way of Ratalaika Games.  Now, we tend to review the vast majority of games from Ratalaika and so we knew we could most likely request a review code for this one but with half the writing staff playing Elden Ring and the rest of us backed up with indie games to review, we were going to let this one slip.  Before we get into the pros and cons of this one, here’s a spoiler.  Thank God we didn’t let this one pass us by.

The plot here is that a caravan of settlers is making their way to their new home (think Oregon Trail).  However, the road ahead is long and dangerous and so, in an effort to survive the bandits and monsters that lay in wait for them, they hire three heroes to protect them.  This is where you come in as you’ll pick the heroes and battle with them in tactical, turn-based combat. 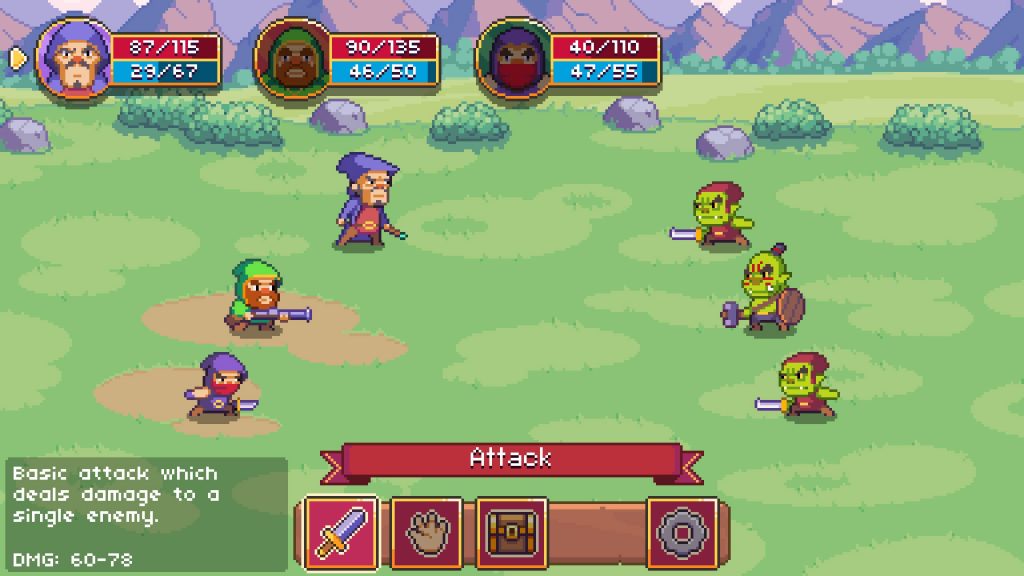 Strategy games can be very complicated but we’ve always been a fan of the simpler stuff from the good Command & Conquer titles to my own personal favourite game of all time, King’s Bounty.  Well, Royal Frontier keeps it very straightforward.  After picking your heroes, which initially is a default choice because you have three slots to fill and three heroes to fill them, you are then presented with a choice of perks (additional damage, HP, armor, magic and money) and then you begin your journey.

This is represented by three trails of icons (like the old TV show Strike It Lucky but without the issues presented by finding a sexually-injured corpse in the host’s swimming pool).  Each icon represents a day of the journey.  Most of them are battles, so let’s look at those first.  These are old-school turn-based battles where your three heroes face off against two or three (usually three) enemies.  Your group goes first.  Each hero can do their basic attack, a special magic-based special move or they can use an item.  Attacks focus on one enemy only (although some specials allow for group attacks) and so you need to figure out which enemy to attack and when.

Do you take out the biggest threat first?  Or do you spread out the damage a bit more?  Do you blow precious magic points on a big attack, knowing that that will leave you lacking for bigger battles in the future?  It’s all standard stuff but there’s enough of a requirement for tactical know-how if you want to be successful. 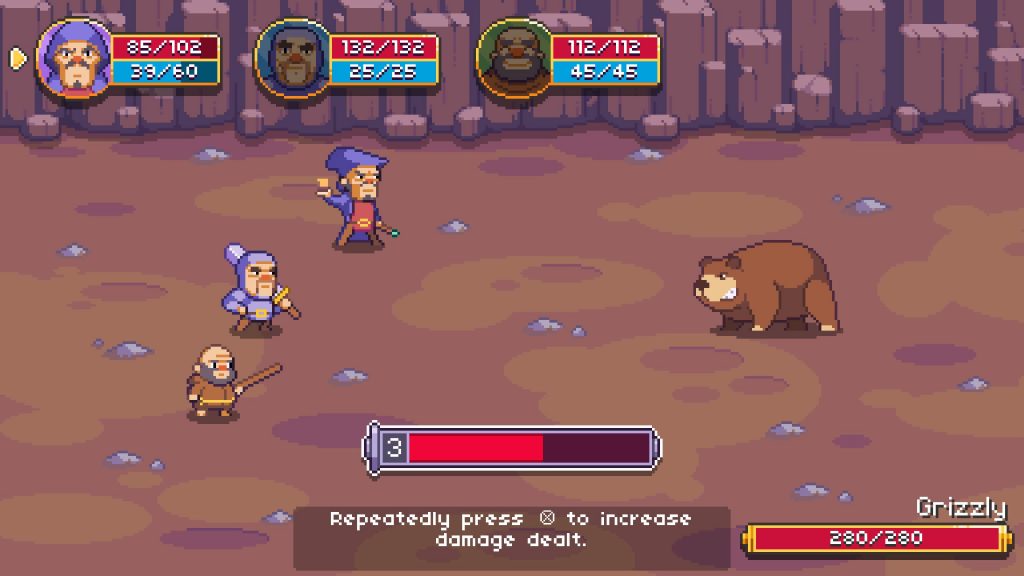 A wrinkle to the gameplay is that when you are attacking or defending, you’ll need to time your final button press in order to get maximum effectiveness.  It’s a small thing but it can make a big difference in combat, potentially saving your life or being the difference between an enemy biting the dust or still getting a last attack in with their few remaining hit points keeping them alive.

Knowing the abilities of your heroes is key to success and that’s fine because, as we said, you only have three of them to start with (a wizard, a knight and a healer).  Along the way you’ll earn three more (a rifleman who can unlock a devastating sniper attack, an armoured ‘tank’ style dwarf and a powerful assassin).  Each hero has strengths and deficiencies but we tended to favour the higher damage dealers as the foundation of a good defence in this game is to kill enemies before they get their chance to hurt you. 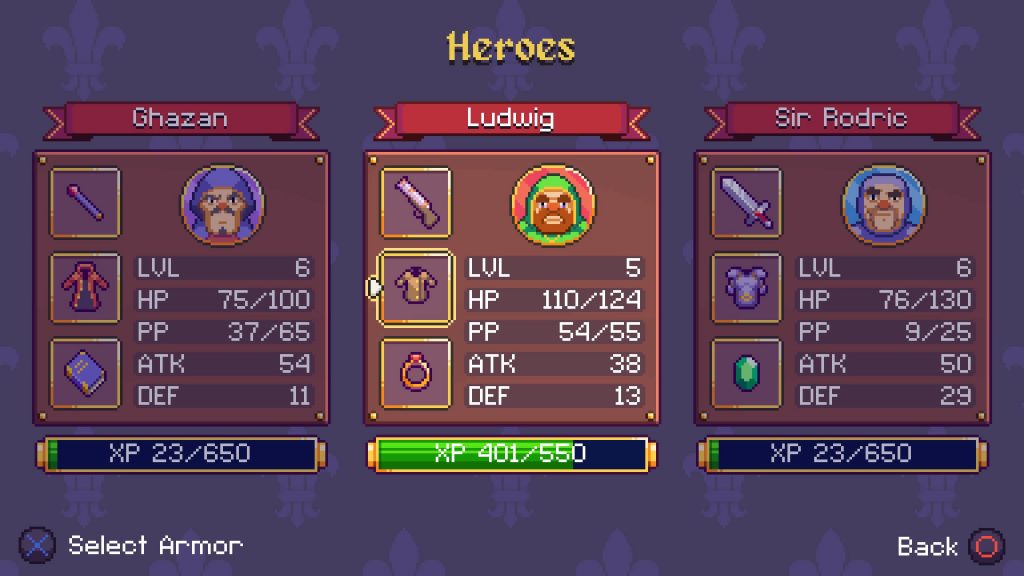 After each battle you’ll earn either cash, equipable gear or items that can be used in battle and along the journey you’ll get to nodes on the map that give you treasure, shops, a place to rest (where you can select to boost up your health or magic) and also some scenarios where you have to make a choice.  The latter can result in either an extra fight or some more gear.  This means either new weapons (to boost your ATK stat), new clothing (DEF) or rings and gems which also boost various stats and can even let you regenerate a little health or magic after each turn.

There’s plenty of good stuff to help bolster your party’s chances in battle but mercifully it’s not too complicated.  You’re not there comparing ten different stats on a ring to see if it’s better than what you’ve already got.  It’s all very straightforward and that really goes for the whole game.  You can learn to play it in three minutes but then get better at it over the following few hours.  It’s not a long game though and before long (probably within three hours) you’ll have completed a successful journey. 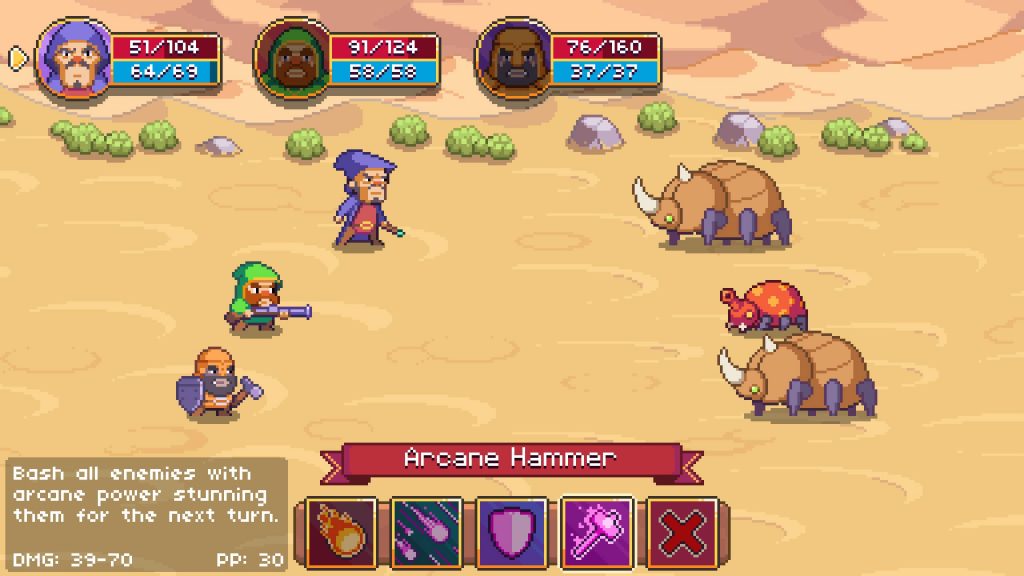 Of course, being a Ratalaika game, you’ll have earned the Platinum trophy much sooner than that but a list of in-game challenges might just keep you playing for longer.  Indeed, we’re keeping this one installed just for that very purpose.  And, as expected, you also get an identical PS4 download too which has it’s own Platinum trophy also (if you’re into that sort of thing).

To be honest, this is exactly the sort of thing we like here at PlayStation Country.  It’s simple but has enough depth to make it interesting and we were fully engaged right to the end.  The unlockable heroes and perks are fun to experiment with and will suit many different tactical styles too.  And, crucially, none of it is a faff.  It taps into that Advance Wars style of strategy that is easy to pick up and play. 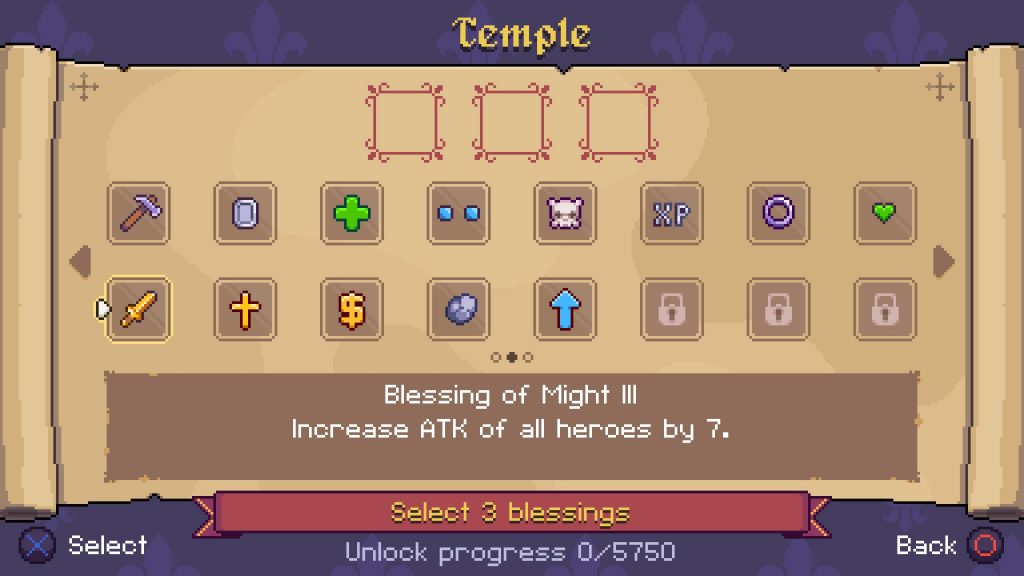 The presentation is very simple with 16-bit style pixelised characters and backdrops.  It’s not going to win any awards but everything is clear and easy to understand.  The standard retro style music doesn’t offend either.  And the thing is, the nicer you make the visuals on a strategy game, the more fussy it gets.  Just look at how King’s Bounty 2‘s 3D camera set up completely makes playing its battles a chore where as the first game (which has a passing resemblance to Royal Frontier) just gave you all the info you needed right there.

If you’re looking for something more complex, this probably won’t be for you but if you want to dip your toe in the genre or just play a turn-based strategy game that is more about the battles and less about endless statistics, then Royal Frontier is perfect for your needs.  Its simplicity is its strength and this is easily Ratalaika’s best offering to date.

Royal Frontier
8 Overall
Pros
+ Fun strategic gameplay
+ Good perks and loot
+ Simplified and streamlined gameplay
Cons
- Presentation is quite basic
- Might be too simple for hardcore strategy fans
Summary
If you fancy some good, tactical turn-based combat but without endless stats, quests, exploration and faff then this minimalistic strategy game might be for you.