I freely admit to knowing nothing about surfing other than the really high level stuff such as it taking place on water and involving a surf board.  My lack of knowledge of the activity probably goes hand in hand with the fact it is vastly underrepresented in videogames.  Doing a quick search online and it appears there was a flurry of surf games in the early 2000s but nothing since.  Effectively then Surf World Series is likely the first console surfing game in around 15 years.

Upon starting the game you’re taken to a training pool and have to complete a series of tasks to get familiar with the controls.  This was excellently handled and started from the very basics of standing up on your board through to how to pull the most complex of stunts.  I found the training mode to be super useful as I didn’t have the natural understanding of how to surf that I automatically have with other sports. 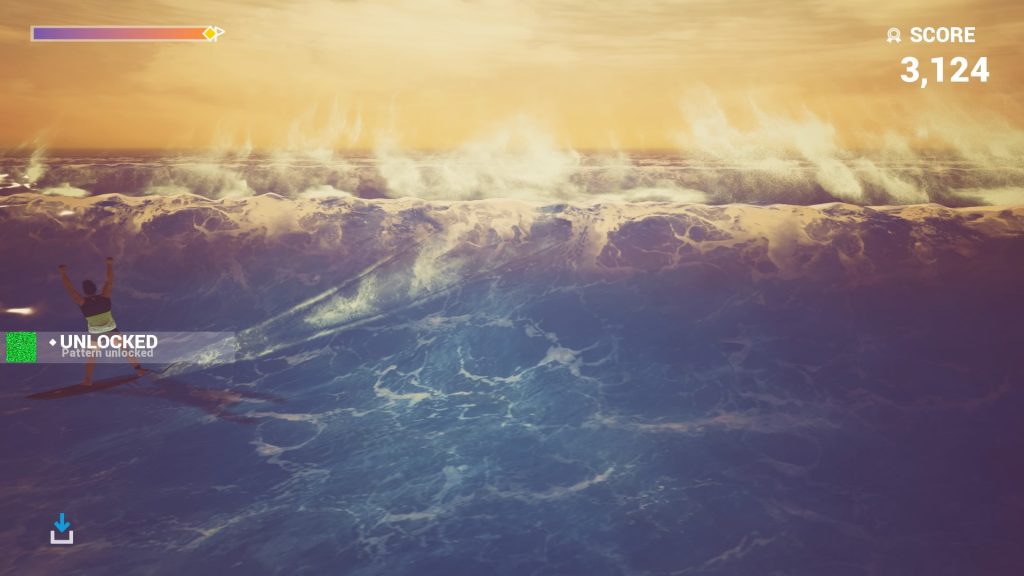 The developers have done a great job of translating surfing to the DualShock 4, and I found control to be intuitive once I’d gone through the training.  Basically you control the direction of your board with the stick and use the shoulder buttons and face buttons to pull off various stunts.

The way stunts are done in this game is smart.  Your most basic grabs can be done once you’ve gained air off the top of the wave, but for the more complex spins and flips you’ll actually need to input the button combinations in before you take to the air. After you’ve hit your buttons you’ll have a timer in which you can pull of the stunt for a multiplier bonus. Stunts are free and easy and pretty much any button combo will see you pulling off some stunt.

This isn’t to say Surf World Series is easy or lacks nuance and there is a fairly steep learning curve to get up to speed with the range of possibilities on offer. I was spending an awful lot of my time wiping out after overstretching myself or missing a jump.  Overall the stunt system works pretty well, with variety and the chance to develop some true skills 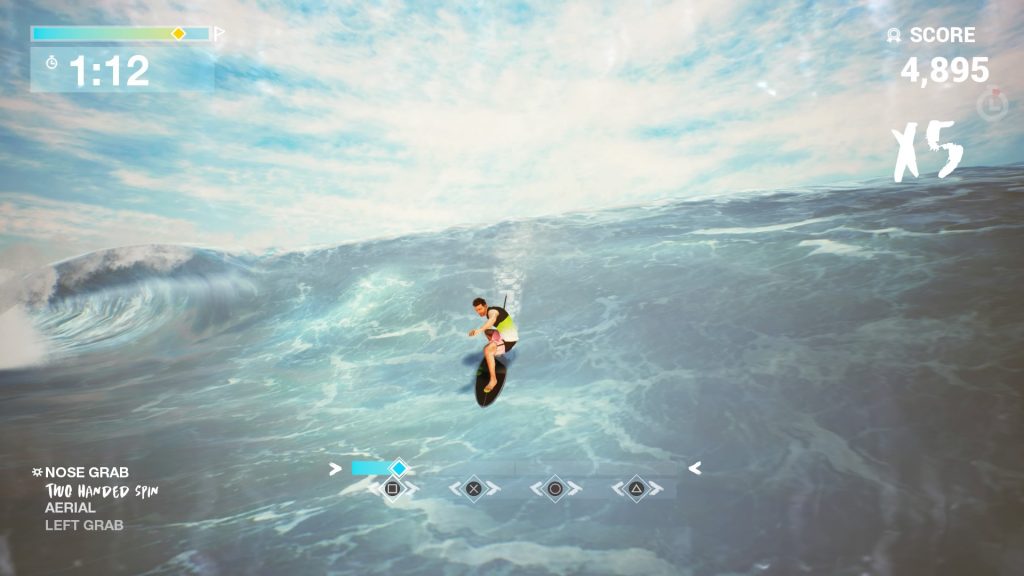 Based around five locations Surf World Series offers some beautiful ocean scenes.  You’ll take in Australia, Brazil, Portugal, South Africa and America. The settings are also playable at nigh which really changes how they look. Surf World Series does have a really great line in gorgeous scenery, although realistically you’ll be too busy concentrating on the waves to take it in. Where the graphics fall flat unfortunately is in the simplistic character models, which makes it look like you’re surfing with a toy.

There are 45 single player levels spread out over varying difficulty levels and encompassing a few different kinds of disciplines.  They aren’t organised into any kind of tournament system so you’re just riding in separate rounds. Whilst all of them involve riding waves you’ll be tasked to either ride one wave without wiping out, get a high score within a set time limit or achieve set scores over two to three waves.  Restarts after a wipeout are quick and it is easy to just keep going with one more wave hoping to get a better score on the next one.  Whilst on the face of it these disciplines offer some variation in practice you’re still just riding waves, but boy what waves. 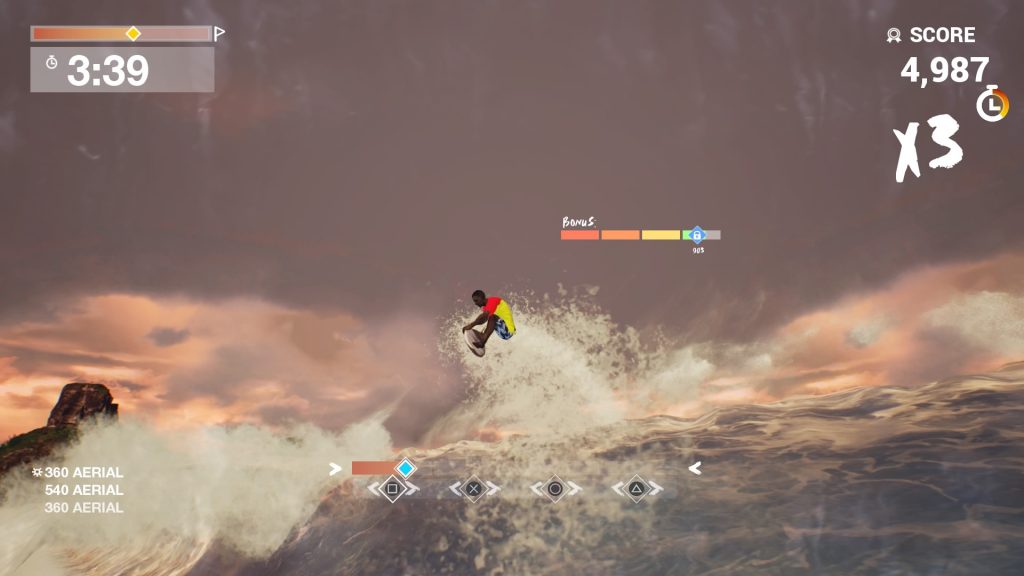 The strongest aspect to this game, also what gives it the much needed variety, is the different kinds of waves you’ll surf. It feels like each level has waves with a different temperament.  Some levels have fast and low waves, while others have chaotic and large waves, others have a tendency to form tubes whilst some barely break.  I was constantly amazed by the variety of waves and the way each wave altered how you need to surf.

Outside of the single player campaign there are a few online modes where you can play with your friends or just set up an open game to let people join.  It was dead online for me and I couldn’t find anyone to play against. Not surprising really as this is a pretty niche title, if you want to get the most out of online then you’re going to need to persuade your mates to dive in with you.

Aside from this there is also the option to customise your surfer’s outfit and board.  Showing off how little I know of surfing, you can choose from around six different surfers of various nationalities.  I’ve no idea if these are based on real people or not, but you unlock different patterns and decals as you progress through the game and can customise your outfit pretty well if you’re so inclined. 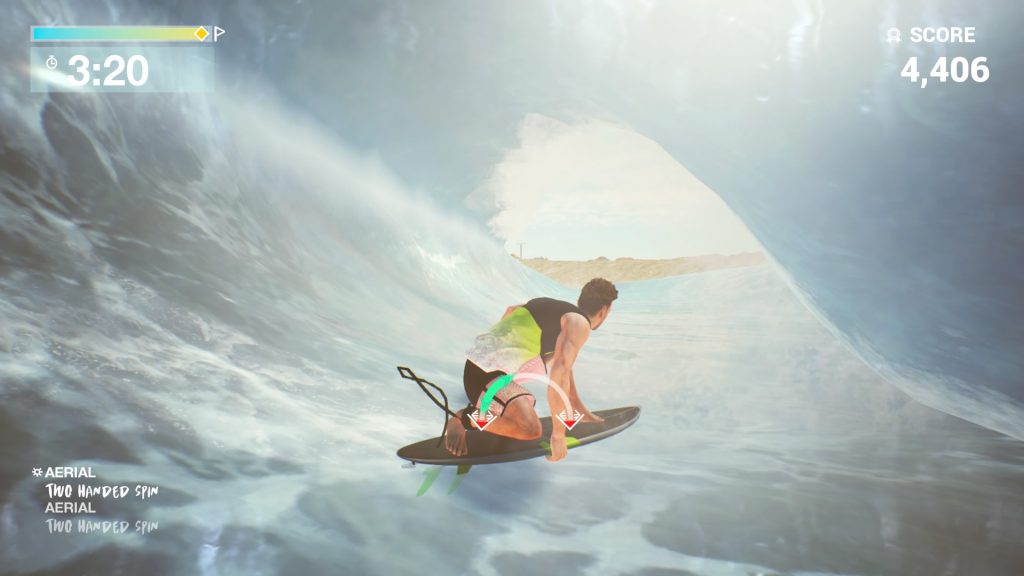 Surf World Series manages to pull together a decent surfing game and looks pretty gorgeous while doing it. It does a lot right and is an easy game to play and chill out with. The way each wave feels different from the last is a huge plus point here, but at the end of the day you’re just riding waves.  Treat this game as a palette cleanser between more weighty titles and you could have some fun, but as a title to sink hours into, I’m not that convinced.

Surf World Series
7 Overall
Pros
+ Lovely scenery makes this a great looking game
+ The stunt system is elegant
+ Each wave feels genuinely different and adds variety to the game
Cons
- Character models look a little simplistic
- Variety is limited as all you do is surf waves
- Lacks longevity or any tournament structure
- Online is dead
Summary
Surf World Series manages to pull together a decent surfing game and looks pretty gorgeous while doing it. It does a lot right and is an easy game to play and chill out with. The way each wave feels different from the last is a huge plus point here, but at the end of the day you’re just riding waves. Treat this game as a palette cleanser between more weighty titles and you could have some fun, but as a title to sink hours into, it can get a bit repetitive.