From Sloclap and Devolver Digital comes Absolver, a combat focused action game which has similar mechanics and features to other games but as a whole is pretty unique.

You play as a Prospect, a mask wearing individual who is tasked with defeating enemies on the way to the Tower of Adal. Reach the top and you become an Absolver. Although there are a few cutscenes early on there isn’t a whole lot of story thrown at you, just snippets here and there you can gather from NPCs. 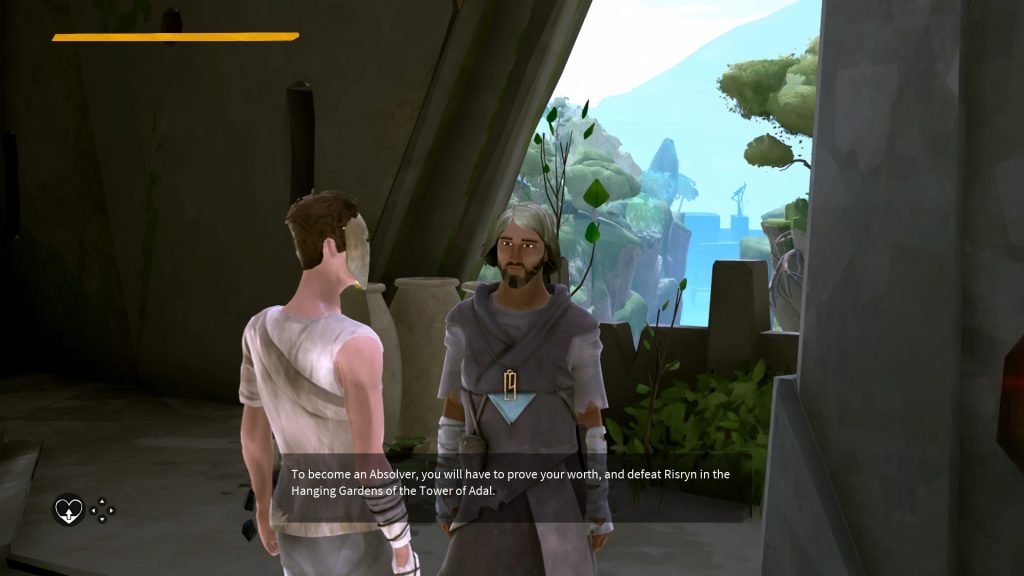 You have a limited ability to customise your character aesthetically with gender, hair colour, hair style being your only options (your face is covered by a mask remember) . The most important choice is your fighting style that will govern how you play the game. There are three choices, the most important aspect decides what move is applied to the right stick. Parrying requires excellent timing but will block your opponents attack and stun them allowing you to counter, dodging requires you to move in the correct direction to jump over, duck under or side step attacks before countering. The other allows you to absorb attacks, taking temporary damage that you can regain if you land some attacks of your own.

Once that’s done and you’ve seen the little story there is you’re thrown into the game. Starting with a brief tutorial area you’re taught the basics. Then you get to the world proper and you can go in whichever direction you like, tackle whichever target you want to first. There is a map but it’s hardly detailed, your best bet is to just choose a direction and head there. Smaller areas are interlinked and you can explore to find loot in the form of armour to customise your stats and how you look, or fights with respawning normal enemies before encountering the named targets. The actual exploring is adequate at best, with little reward for checking every nook and cranny but you shouldn’t go in expecting that in the first place.

The game is focused on one thing which is easy to understand but difficult to master. Absolver is all about fighting. You can lock onto opponents and from there unleash your attacks with the square button, the triangle can be used to insert another attack into your combo. You have stamina to watch out for, running out will leave you unable to defend yourself. You’ve got some unlockable skills, initially a basic heal, that are assigned to the dpad. There’s the aforementioned right stick that will pull off your defensive manoeuvre and the other important thing to consider is your stance. Holding R2 and moving the right stick around changes the way you’re facing – front left, front right, back left, back right. No matter which way you’re facing you’re equally capable of defending and attacking, but a different attack string will come out depending on your stance. 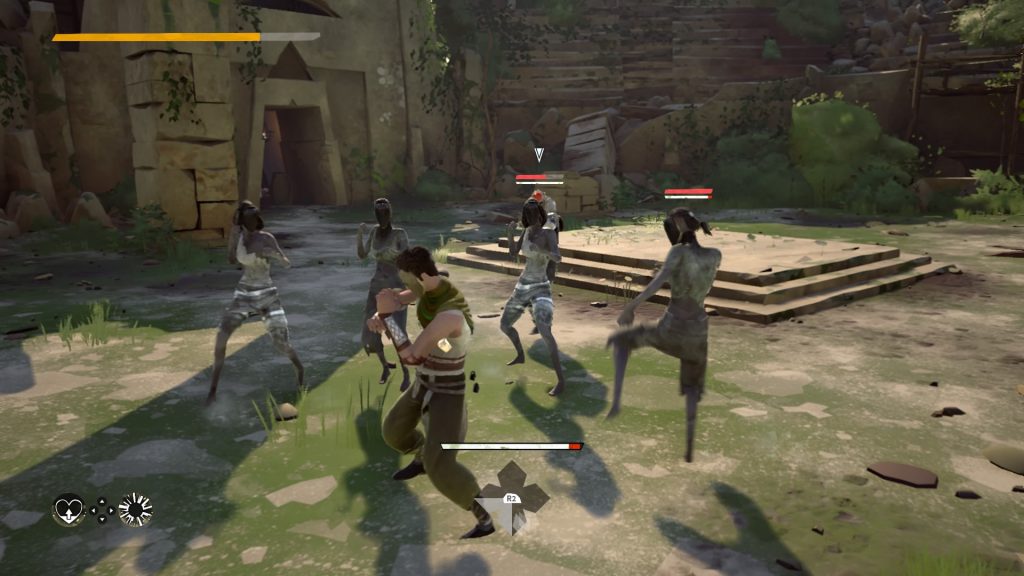 Here’s where the depth comes in as you can customise your own combos and each move ends with you facing a specific direction. Through careful planning you can combo strings into one another for an endless combo, or however long your stamina lasts. Using the same combo is a bit predictable though so you can throw in a triangle attack or even fake attacks if you cancel with the block button as you attack.

You gain normal experience by fighting enemies which you can use to level up different stats (strength, vitality, etc.) but you also learn new moves to customise your deck with. More specifically by defending against the attack you’re trying to learn. Blocking grants a bit of experience towards learning the move you block against, using your right stick ability to parry or dodge grants even more experience. Once the bar fills up you then have to defeat your opponent to lock that move in, lose and you gain nothing. It’s an interesting approach and I’ve seen it compared to actual martial arts where observation and patience is the key to learning, rather than simply winning. What this does mean though is a lot of fights last much longer than they would have otherwise as you wait for the AI to do the move you’re trying to learn. It’s basically like killing the same enemy over and over again in an RPG in the hope of getting a specific loot drop which is satisfying when it happens but a bit tedious when you’re doing it.

However I learnt more playing the game this way than I would have had I just blitzed through it. Blocking to feel out an enemy’s combo string, trying to find the timing to dodge the move you want to gain the most experience from stood me in good stead for completing the single player portion of the game and prepared me, at least a little, for the multiplayer aspect. 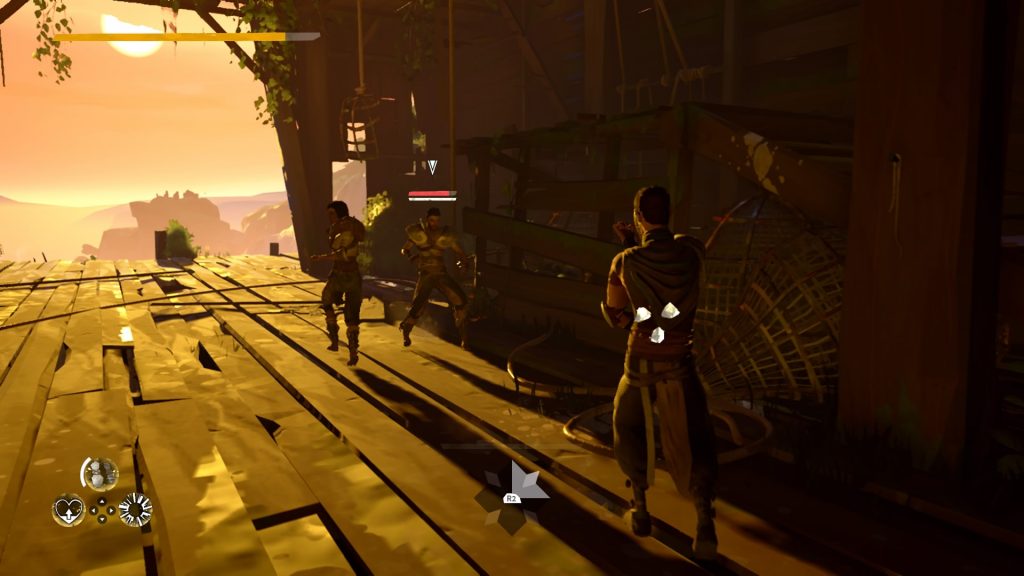 Unless you choose to be offline, Absolver is constantly online. What this means gameplay-wise is that as you explore the world, other people will also be running around in your world, like an MMORPG. You can ignore each other, help each other off the cuff, join together for some co-op or fight each other. It’s all pretty seamless, with the L1 button opening a gesture wheel which also has options for inviting people to join you or challenging them to a fight. Friendly fire is always on so you’ve got to be careful where you’re throwing your fists but a couple of times a random invited me to co-op with them and running around watching each other fight, stepping in when the other person is in trouble or just ganging up on people was enjoyable even without communication.

There are also combat trials which are one on one duels which take you out of the world and into an arena. First to three wins and you gain a separate level here that grants you more unlocks to develop your fighting style, join a school and even open your own school for other players to join. If you’ve enjoyed the Dark Souls PvP scene at any point then this could easily get its hooks into you.

So the core concept is well executed but how does it hold up technically? Not great, unfortunately. Visually the game has a nice art style and the animation on the characters is great, doing a very good job of conveying the different martial arts, but on a technical level the character’s are quite plain, everything is washed out and there aren’t many exciting areas to explore. Worse than that is the framerate. When you’re connected online things can get very bad. Every time someone enters the same location as you the game announces it with a sound effect and a ticker on the bottom right of the screen, which is fine.

Unfortunately pretty much every time the game pauses briefly as well. The first day I tried it the game was very busy and it just wouldn’t stop hitching all the time, to the point where I decided to finish the game offline just for my own sanity. Once I had completed the game I went back online and as it was a little quieter it wasn’t such a problem, but it still had a negative effect on performance. There have been a few patches already so fingers crossed this can get smoothed out as it’s a major part of the game but currently it has too big an impact for me. 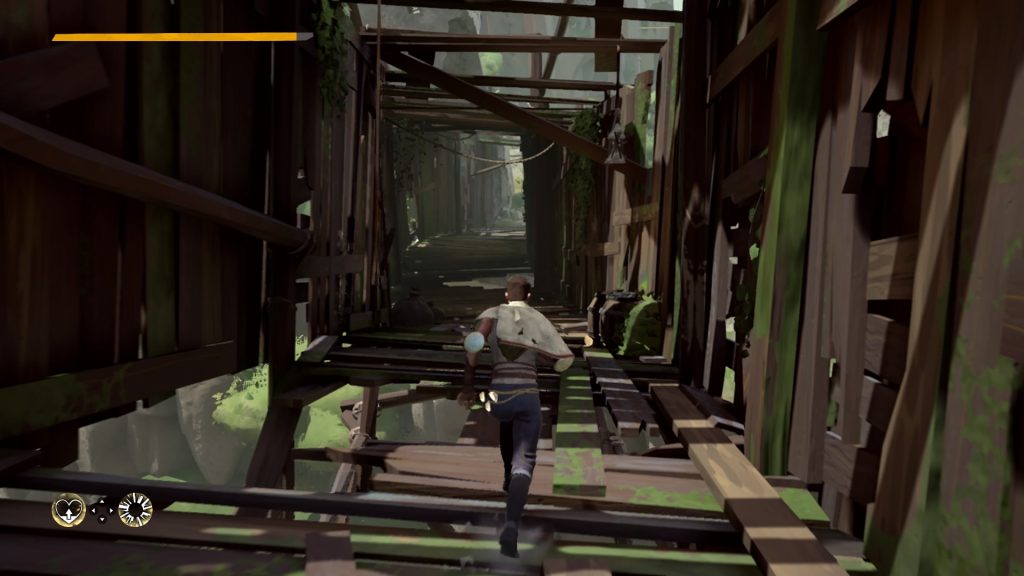 If you’re expecting anything else then I’m afraid to say that’s it. It won’t take you too long to take out all your targets and the tower itself was very underwhelming, but if you get into the combat then learning all the moves will take a long time and if the multiplayer combat and school system takes off then I can see this occupying a lot of some people’s time. The depth is there in the fighting system and if it sounds like your thing then you’ll get out what you put in, as they say. For those looking for an adventure or anything other than fighting then it might be worth sitting this one out.

Absolver
7 Overall
Pros
+ Fighting system is deep and rewarding
+ Nice art style
+ Plenty of move customisation to make your character personal
Cons
- Technical hitches whilst online are really bad
- Nothing else to it other than the fighting
- Learning new moves can be a tedious process
Summary
Technical problems aside, Absolver is a great fighting game. If that's enough for you then although the campaign is over relatively quickly the multiplayer and customisation could keep you going for a long time.