Super Woden GP is an isometric racing game from Spanish software studio ViJuDa that landed on Windows last year but has now found its way across to PSN courtesy of publishers EastAsiaSoft.

The developer describes the game as being very much influenced by console games from the ’90s back when top-down racers were a lot more popular and while we’re not sure the genre is as extinct as they claim, we’re always happy to see some throwback ’90s gaming. 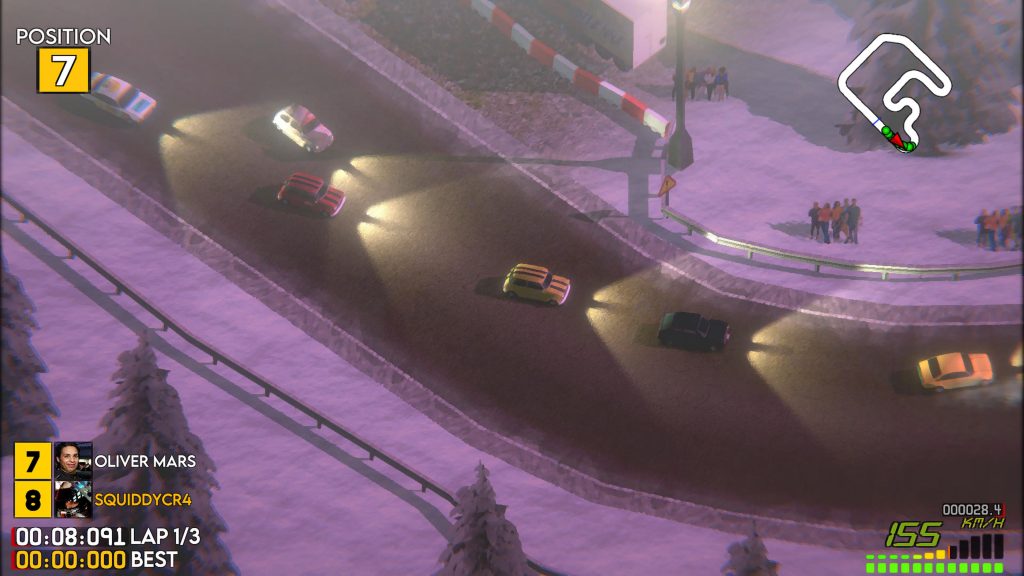 With no plot to worry about, the only story here is that you start as a racer with barely any money.  You pick up a cheap car and then can take part in either two types of event.  Weekend races see you taking part in single races while the GPs see you competing Grand Prix style over multiple races.

Each event has a ‘PP’ limit which is there to stop you taking a supercar into a super low level event and, of course, there is cash awarded depending on how well you do which, early on in the game, will be best described as ‘quite poorly.’

That’s because Super Woden GP is quite a hard game to get to grips with initially.  Our first couple of races saw us finishing in the bottom half of the pack (actually we didn’t even finish the first race because the controls took a bit of adjusting too and we were effectively out of the race in the first lap).  That’s not to say the controls are bad, they aren’t, but rather that they’re unforgiving. 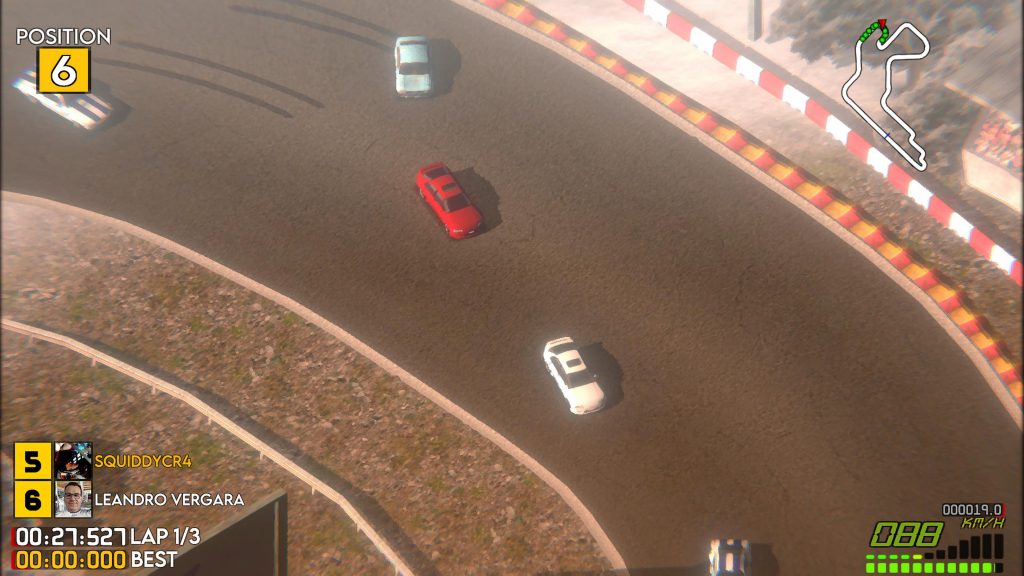 Although all you need to worry about is steering, acceleration and braking, the issue is how skiddy the vehicles feel on the tracks.  Cars have stats for power (speed), handling and grip but this is a game where it is easy to drift into a barrier if you don’t baby the accelerator a little.  You can’t just squeeze the right trigger and hope to power through.

So at first we weren’t really feeling the game but you do genuinely get better and eventually you’ll find yourself gliding through turns and catching up with the race leaders.  At least for a while.  Pretty quickly your car will be outclassed in so far as even a perfect drive won’t allow you to win and so you’ll have to buy new vehicles pretty much constantly which is a shame as they’re a little more expensive than your prize money can keep up with unless you grind earlier events a little. 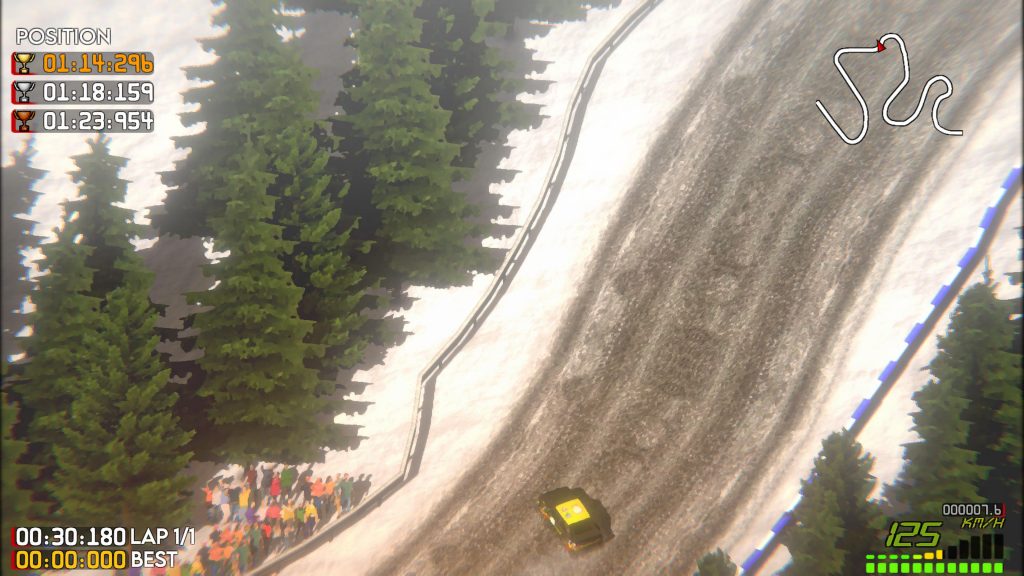 In the game’s world map you’ll see various vehicle suppliers with one for Italy, America, the UK, Japan and so on.  These are essentially your Ferraris and so on but you wouldn’t really know as most of the cars seem pretty boxy.  There’s a little bit of customisation in so far as you can pick from a handful of colours but that’s it.  You can’t decorate your cars with decals and so on, nor can you upgrade their specs in any way.

While we’re not too sure about the overall meta structure of the game the racing on the track is actually pretty good once you get used to the handling.  Going from abject failure to winning an event, and that all being down to skill and nothing else, is actually very satisfying.  Especially as failure is a constant and likely threat. 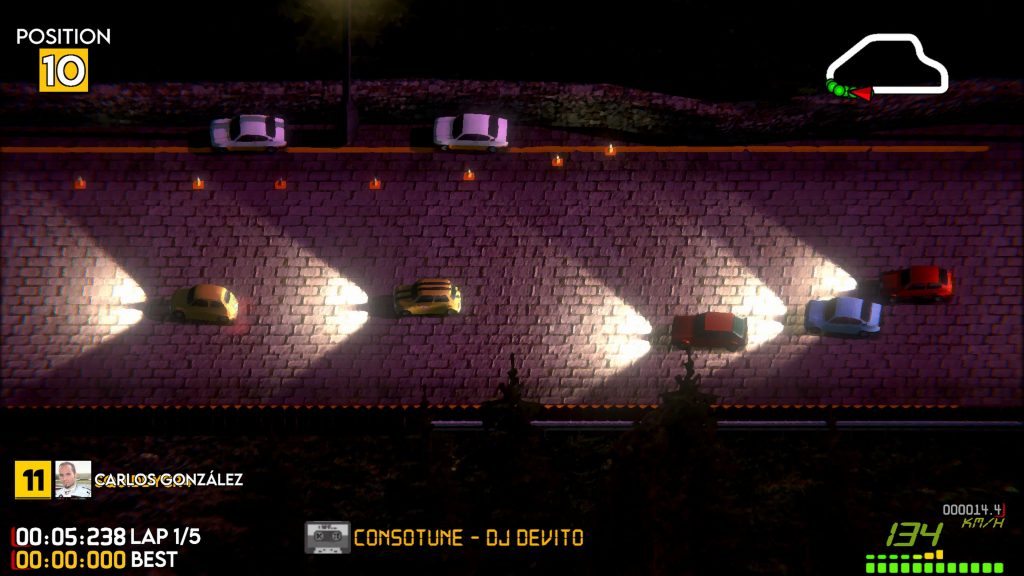 The AI is a little weird though.  Essentially they seem to all take the exact same racing line and, if left alone, will pretty much drive in an equally-spaced parade.  They don’t take any chances or attempt to overtake each other and so really you’re just racing against the default first placed guy or girl in GP events.  It’s a little uninspiring and takes away from the game’s character a bit.

We did quite enjoy the visual style of the game.  The isometric viewpoint works reasonably well (although sometimes foreground objects can get in the way of the action) and the varied race locations do keep things interesting.  We weren’t very impressed by the weird filter on the visuals though.  This makes everything look hand-painted but there’s no reason for that and it just looks like a filter anyway. 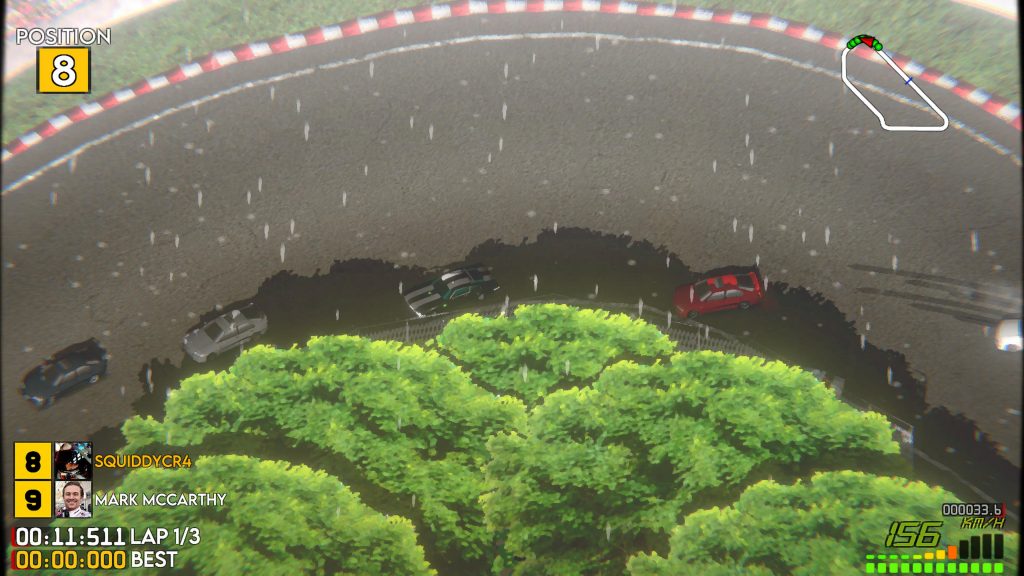 The developers do seem to be enamoured with the soundtrack (at least on all the game’s press blurb) but we found it to be all a bit keen.  While it’d fit in with a Sega arcade game from the ’90s, it all just seemed a bit Euro House to us and a bit unpleasant to listen to.  It’s a bit out of keeping with the graphics too which are certainly a lot more restrained.

Overall though, this is a pretty good game.  It’s not quite up there with the best in class (Mantis Burn Racing) but it offers a rewarding racing experience.  While progression is a little slow in the game we did appreciate the varied tracks and thought that the rally mode was a clever addition.  The couch multiplayer was a mandatory addition of course but works well here.  So, all in all, this is a pretty decent racing throwback.

Super Woden GP
7 Overall
Pros
+ Rewarding racing action
+ Tight controls that are simple to learn and hard to master
+ Visuals are quite nice
+ Rally mode is a good addition
+ Track locations are varied
Cons
- AI is very robotic
- Progression feels slow and too gated
- Soundtrack is a bit much
- Lacks customisation
Summary
Super Woden GP is a '90s throwback racer that's surprising tough to get good at but very satisfying when you do.