Tanuki Sunset is a skateboarding game from Canadian coders Rewind Games.  However, that description doesn’t really do this game justice at all.  The game combines downhill skateboarding with a glorious ’80s aesthetic and it does it all to great effect.

You play as the titular Tanuki, who is a rather radical racoon (radical in the cool ’80s sense of the word) and it’s your dream to make it on to the front over of FISH, a magazine for skateboarding racoons.   To do this you have to complete a journey through the game’s three main areas and make it to the fabled ‘Big Ramp.’ 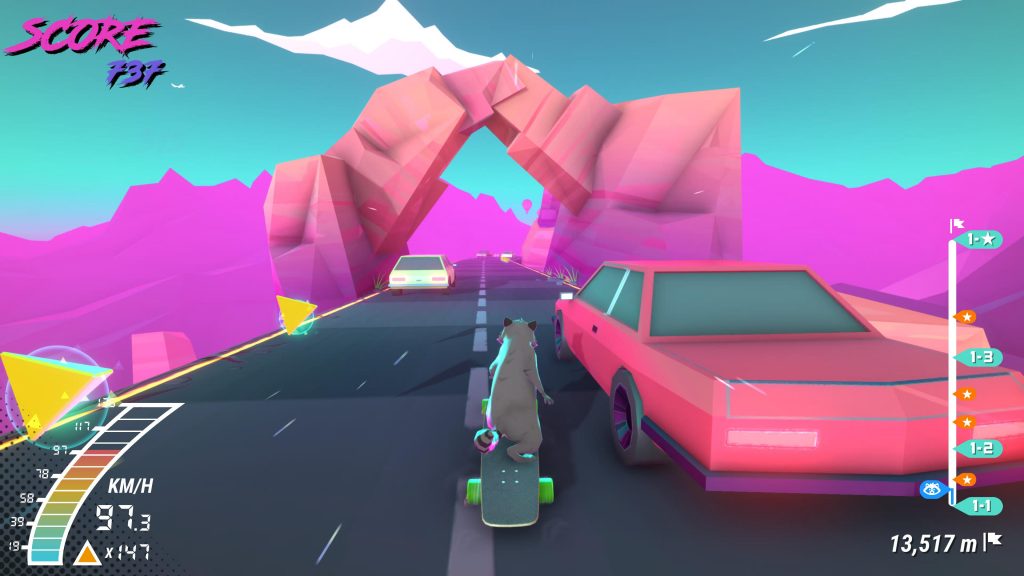 It all starts of gently enough with you starting in the neon-lit Sunset Peaks.  Here you’ll learn the basics of skating and drifting.  Interestingly, this isn’t a skateboarding game in the traditional sense.  You won’t be pulling grinds, manuals or many tricks at all.  Instead the focus here is on speed and the first tutorial only focuses on that.

The meat of the game involves steering your way through the dangerous, winding roads that make up the whole game.  Both steering and speed are mapped to the left-stick, which is a little odd, and that’s because the triggers are used for left and right drifting respectively.  Drifting is very important in this game, so much so that they even give you the option of using the X button instead of the triggers.  If you do use them though, you’ll get some nice DualSense haptics going on.

So for a while, that’s all you need to worry about.  Staying on the track is your main focus along with avoiding obstacles (mainly cars) and picking up ‘bits’ which are used to buy cosmetic items in the in-game shop. 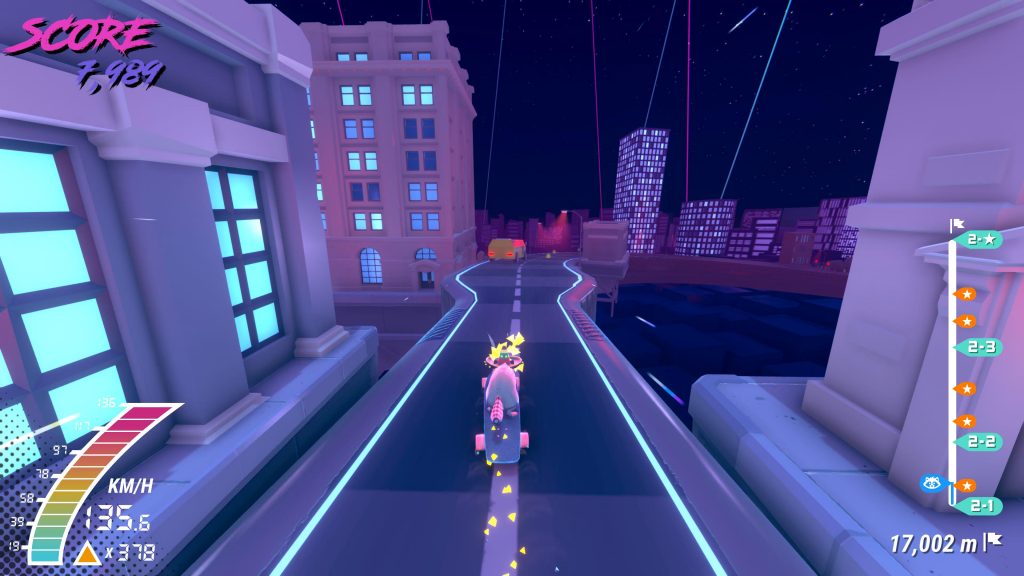 Later on a few new wrinkles to the game are added such as ramps which can be used to launch into a basic spin trick along with new obstacles that require the use of a very limited jump ability.  There’s also a revert which is mainly used to pick up groups of bits all at the same time.  Now that lack of trick focus might seem a bit odd for a skating game but this isn’t really a skating game.  This is basically a speedy dodging game and actually it reminded us a lot of the sensational MotorHEAT which was an Xbox Live Indie effort that almost no-one in the world played (despite it being one of the best racing games ever made).

The thrill of speeding down narrow roads with a drop on each side near-missing cars is genuinely quite exciting and the drifting reminded us ever so slightly of Out Run 2, which is further dialed in with the game’s presentation so, in terms of core game mechanics, Tanuki Sunset delivers.  However, there are some niggles in regards to the gameplay too. 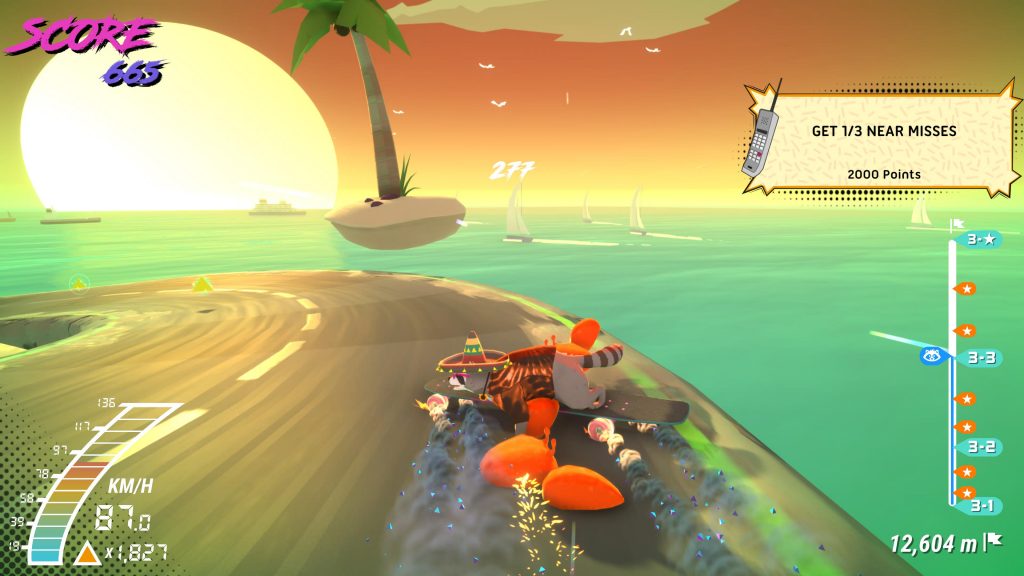 The steering and drifting are a little too sensitive and do take a lot of getting used to.  With X being an option for drifting, we found ourselves constantly trying to brake using L2 (which is, as we said, the button to drift left).  That took a lot of getting used to.  It could be argued also that really the risk vs. reward mechanic isn’t really very well-implemented.  If you just want to see the whole game, you can just take each corner slowly.  And the appeal of going after those ‘bits’ soon wears off when you realise they can only be spent on a small range of visual customisations.  You can’t tweak or improve your board at all.

Other niggles such as the fairly thin story and oddly drawn out ending also annoyed us a little but ultimately not much of that stuff matters.  We completed the game before the trophies went live, so we’re sure that they’ll give you more incentive to play the game better.  Although, you won’t be able to practise and learn the various tracks as everything is randomly generated. 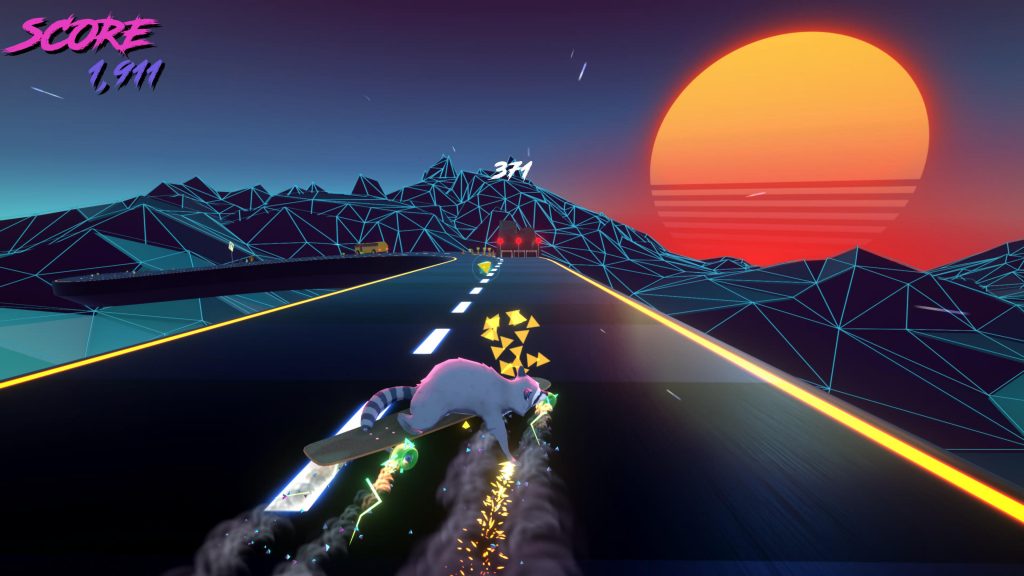 Where Tanuki Sunset scores big is in the sense of speed and the presentation.  The visuals all use a lovely ’80s-style palette.  Sure, it’s not all that detailed (and you can see the track loading into memory whenever you can see too far ahead) but the vibe is there and it’s cool that the sun undulates to the bass drum in the game’s rather sensational soundtrack.  Again, it’s all played for retro nostalgia but you do get Out Run style nostalgia when you play the game.

The game isn’t very long to beat.  It’ll take you an hour or so (although expect to restart some areas a lot, the checkpoints are okay but leave you lots of room to have to replay chunks of it when you fail) and at that point it’s all about going back and trying to beat score and time targets to earn stickers.  Whether or not you’ll want to is up to you but there’s some online leaderboard action there if you fancy being competitive.  But for us this was a short, sweet and simple racer that we really liked.  We’re not sure it’ll keep us coming back time and again but Tanuki Sunset is definitely a bit of an indie gem.

Tanuki Sunset
7 Overall
Pros
+ Good sense of speed
+ Drifting is fun
+ Great presentation
+ Not overly long
Cons
- Story is a bit thin
- Customisation is lacking
- Controls take a lot of getting used to
Summary
Tanuki Sunset is the racoon-based skating game you never knew you wanted. It's fast, fun and pretty cool but maybe a little thin when it comes to gameplay and longevity. We liked it a lot though.