Sophstar is a vertically-scrolling shoot ’em up in the classic ’90s style and it was put together by Brazilian studio Banana Bytes.  It’s kind of old school, as evidenced by the 2D sprites and simple backdrops but comes with a lot of options and ways to play that give it maybe not a modern feel but certainly a ‘complete’ one.

In terms of what type of shoot ’em up this game is, it’s closer to the Toaplan style of shoot ’em up rather than the Cave style.  That is to say that while bullets are an ever-present problem for you during the game, they don’t come in massive screen-filling patterns (at least not very often).  That’s not to say that the game isn’t very challenging though. 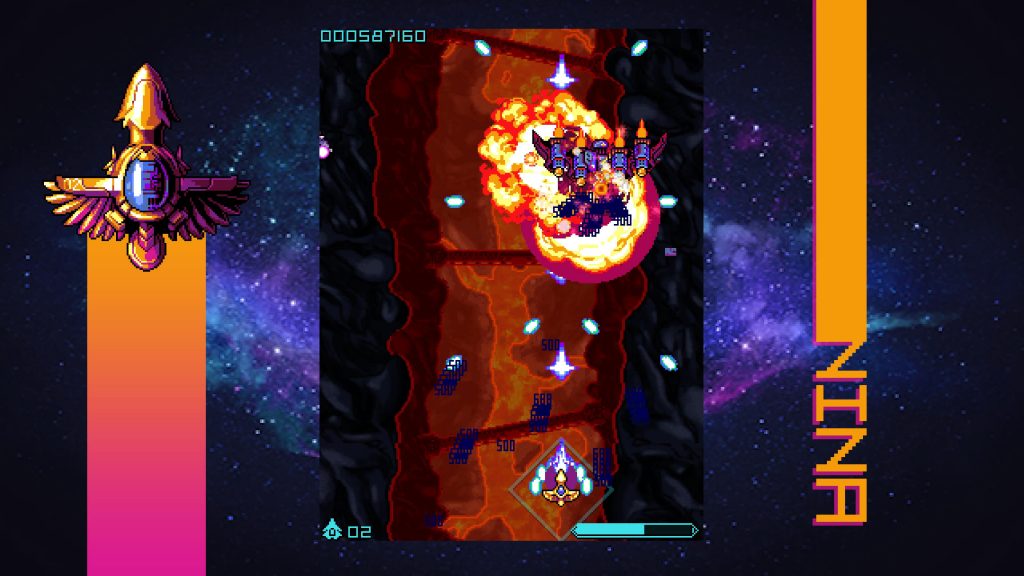 The game offers you plenty of choices up front.  Aside from various visual filters (everything from your basic scanlines to a ZX Spectrum colour palette), a wide range of difficulty settings to cater for all levels of player and different game modes, the main choice to worry about is which of the nine playable characters to pick.

Each pilot has their own unique ship with various levels of spread or focus to their primary weapon as well as different sub-weapons and teleport mechanics.  The variety is welcome and while certain ships just seem to be easier to use, there are no stinkers in the roster so it’s fun to try them all out. 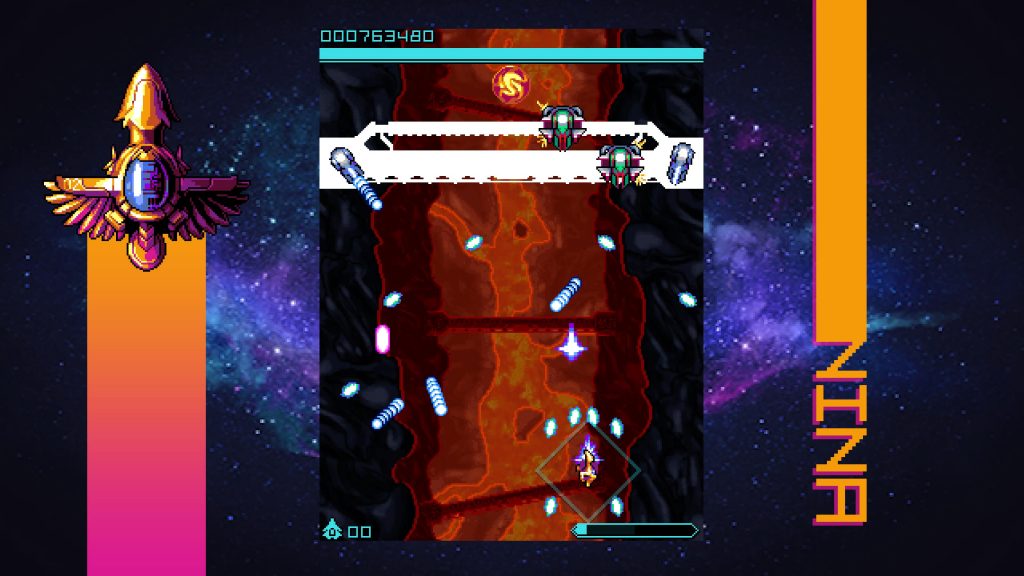 When you get into the main game, things feel reasonably traditional.  You’ll be doing your best work with a combination of moving (left-stick or d-pad) and primary firing (

).  As you play you’ll generate energy for your sub-weapon (

) and this can be handy in a pinch, depending on which character you pick.

Aside from a couple of ship speed modifiers for precise control (

), the other main mechanic is the teleport option which can be triggered by either holding

and moving or by just using the right stick.  Again, this varies ship to ship but primarily is a way to dodge through enemies and bullets in order to get to safety, however one ship uses this to create a drone that fires in place while you move away, while an other creates a black hole that sucks up enemies and bullets.  Again, try them out to see what suits you and your playing style. 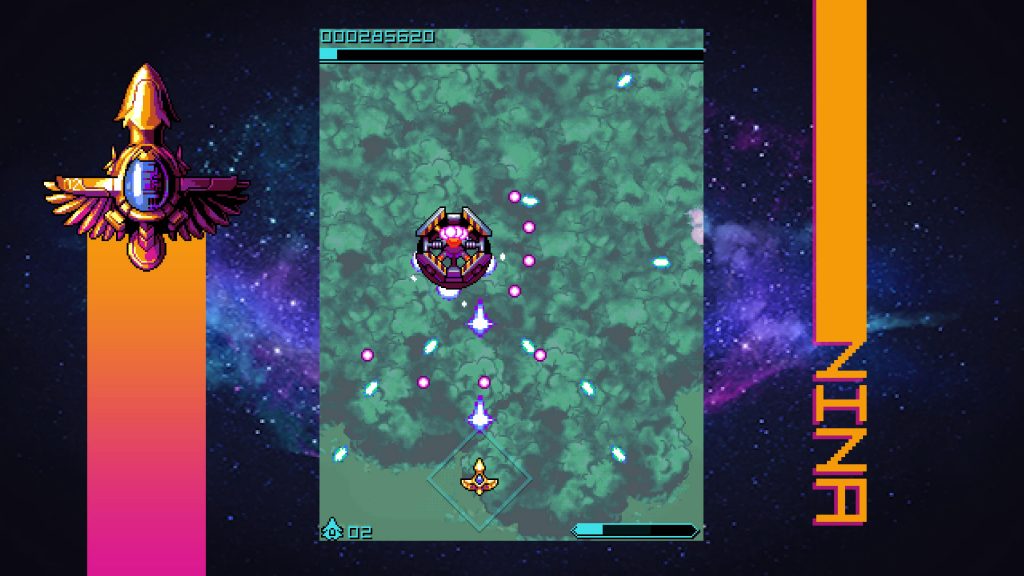 The main game itself is set across eight reasonably short levels.  We like that.  There’s nothing worse than a shoot ’em up that drags on for an hour.  Instead this game is one of those shoot ’em ups that lets you focus on survival just to get that 1CC or offers up some risk vs. reward mechanics if you want bigger scores.  In Sophstar the best way to a high score is to kill enemies at close range to pick up the tokens they drop.  These drop in value rapidly so you really want to be face to face if you want the most points.

You can tell that Sophstar has been put together by people with a real love of the genre.  As we said at the start, it feels complete.  It’s a solid arcade style shooter with attention paid to scoring, challenge and variety.  It feels satisfying to play and the combat here feels exciting and dynamic with shots having a visual effect on enemies rather than giving you bullet sponges to shoot and little more than a peashooter to do it with. 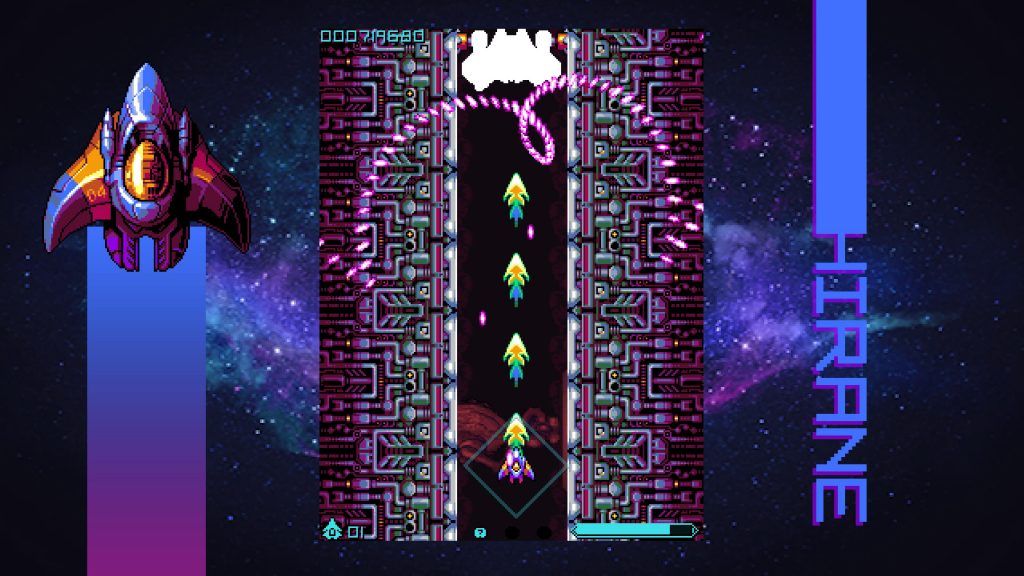 Shots that land here are emphasised with sound effects and flashing effects (that can be turned off) so you know that you’ve hit the mark.  And, most importantly, you can always see what’s coming at you.  With vertically-scrolling shoot ’em ups, you have to maintain a balance between eye candy and visual clarity and, if in doubt, you should stack towards the latter which is what Sophstar does.

The difficulty curve is reasonably smooth too, although the last level can certainly be a bit of a pig compared to previous ones, but it does all feel fair and also not too much of a memory test and when you’re done with the main arcade mode, there’s an excellent ‘Cadet School’ mode that offers up dozens of bite-sized score and survival challenges to try out.  So there’s plenty of longevity here if you’re looking for different content rather than just obsessing about high scores.  That’s great because it means the game really caters to different people. 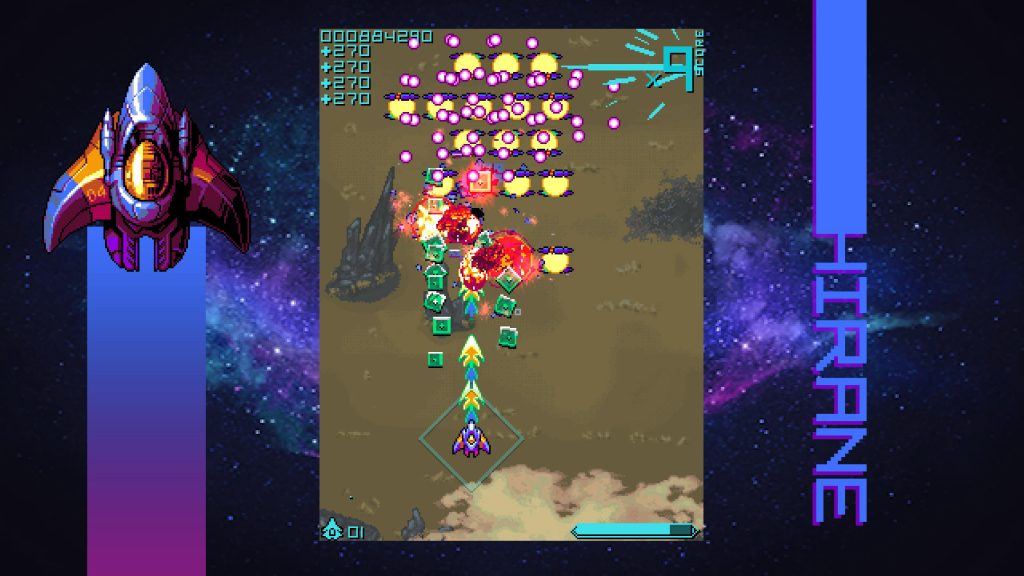 There are some niggles though.  Although a tutorial does show you the basics, it might have been nice to have character-specific ones given how differently some of the ships operate.  We also weren’t really fans of the forced 8-way controls as it makes it feel like the analog stick is, well, sticking.  It takes away from the smoothness of the experience (although it does suit the d-pad) and feels like something they could have made optional (especially as there is an option to ‘rotate’ the controls that seems to do nothing).  And there are dozens of visual filters to unlock but we found most of these to be useless.

Another irritation comes from the floating power-ups that occasionally arrive on screen.  We weren’t really sure what they did initially (well, apart from the obvious points bonuses).  It turns out that they just affect your sub-weapon charging.  That’s a bit underwhelming as we’d have rather seen firepower bonuses or addition techie treats like drones and shields.  There’s also a question mark pick up and we still don’t know what that one does. 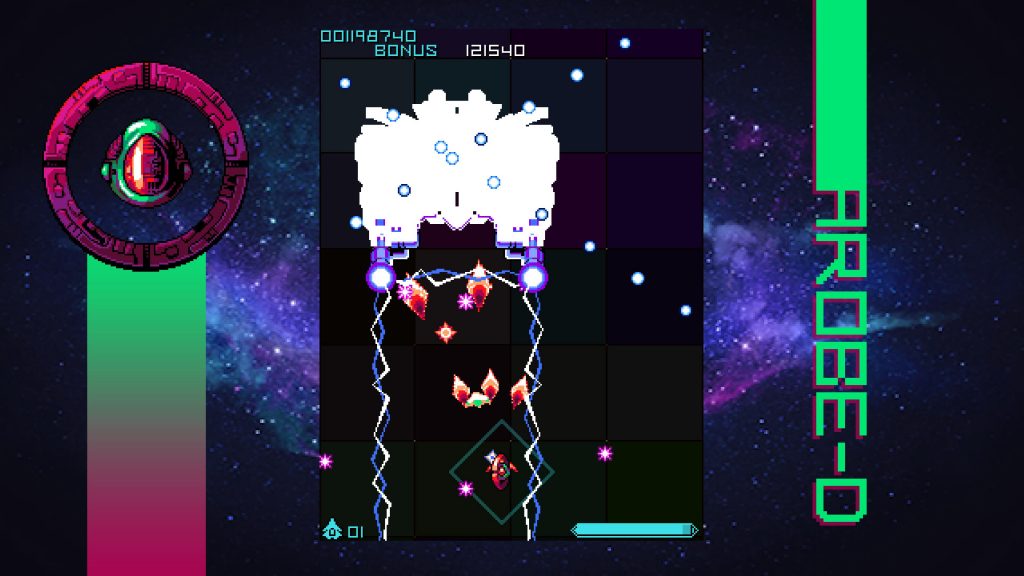 Also, while it’s very much going for a retro look and sound, we did find the presentation a little on the basic side.  As we said before, there is a balance between eye candy and playability but this game looks like a ’90s 16-bit console effort rather than looking like an arcade game.  It’s not awful to look at all but we’d have liked to have seen something a bit more modern but in terms of aiding the gameplay, it does a good job.

For the most part, Sophstar absolutely delivers.  It’s a shoot ’em up for shoot ’em up fans and the gameplay does feel nicely tweaked and balanced.  You get a sense that Banana Bytes have made the sort of game they’d like to play and we absolutely applaud their efforts.

Sophstar
8 Overall
Pros
+ Great variety
+ Very playable and satisfying
+ Cadet School mode is a great addition
+ Good range of difficulty settings
+ Made with a real passion for the genre
Cons
- Weak in-game pick-ups
- 8-way controls feel a little unintuitive
- Presentation is a little bland
Summary
A shoot 'em up clearly made by fans of the genre for fans of the genre. It's both accessible and hardcore and packs in enough content to keep you interested for quite a while.

One thought on “Sophstar – PS5 Review”