Ah, Super Meat Boy, an Xbox Live Arcade classic if ever there was one. It was such a finely crafted game with tight controls and excellent level design which was incredibly tough but fantastically rewarding. And the music! So here we have Super Meat Boy Forever on the PS4, which holds a similar philosophy but changes quite a few key mechanics which might not sit well with fans of the last title. 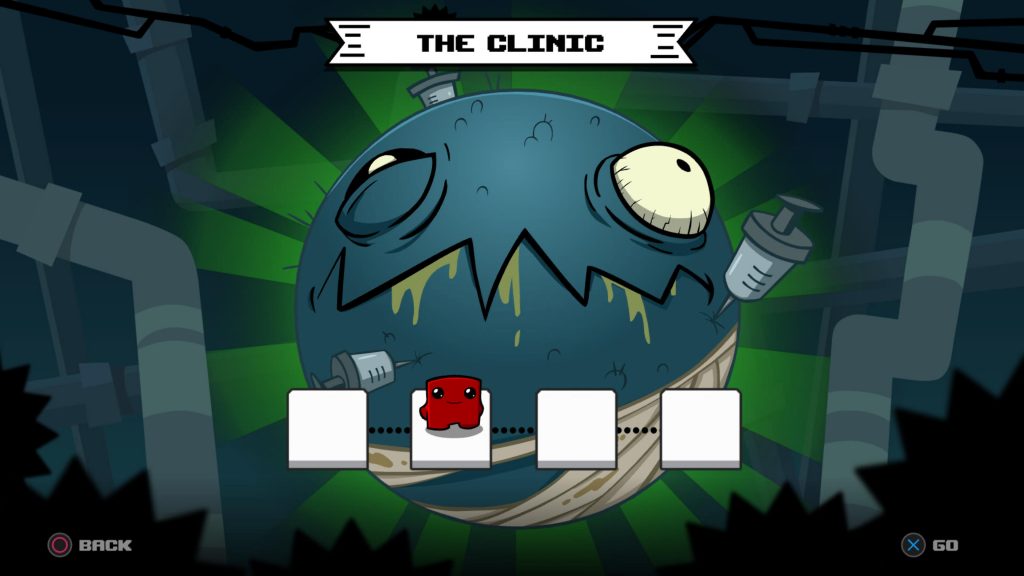 The story in this one is similar to Super Meat Boy, but this time Meat Boy and Bandage Girl (who you were rescuing in the last game) have had a child called Nugget. Dr Fetus is back and he kidnaps Nugget this time so you can choose to play as Meat Boy or Bandage Girl on each level, it makes no difference to the gameplay. That’s it, though there are cutscenes before and after each boss which are amusing and also follow the side story of the wildlife affected by Dr Fetus’ rampage.

The story didn’t matter before and it doesn’t matter now though. Super Meat Boy was all about the gameplay and Super Meat Boy Forever is much the same. There are six worlds altogether, each opening up as you beat the previous one. When you choose a world you’ll instantly notice a difference if you’ve played the last game – there are less levels per world. There are six as opposed to the twenty, but each level is far longer. Whereas a lot of the levels would take twenty seconds or less to complete before now you’re usually looking around the minute mark, give or take, but you don’t have to complete the entire thing in one life. There are checkpoints so those sections could be seen as mini-levels in themselves. 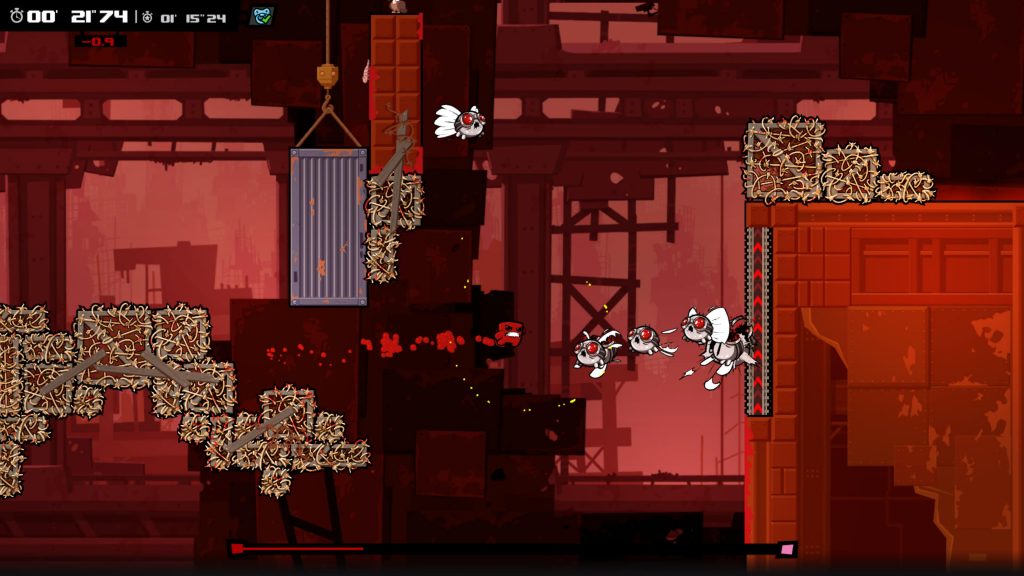 The big difference when you start a level is that Super Meat Boy Forever is an auto-runner, rather than a traditional platformer like the last one. That’s right, Meat Boy (or whoever) will run to the right automatically, through a level randomly generated from pre-made parts, and it’s up to you to jump around the platforms and hazards safely. There are four actions and that never changes throughout the game: you can jump, whilst in the air you can dash forward with a punch, you can dive out of the air and you can slide. You press down on the dpad for the dive/slide but jumping and dashing are on every face button, take your pick. It’s a very simple game control-wise but they achieve so much with it.

Your character can wall jump and if you jump off the wall then you’ll run in the opposite direction so at a basic level you can jump between walls to get height or you may have to run back to the left before you can make progress to the right. As you advance they introduce so many elements that are often only used on that level and with no instructions, you only have so many things you can do so you’ll be able to figure it out pretty quickly. These range from crumbling platforms, chaining punches between enemies in the air to cross gaps and switches to move elements of the level to platforms appearing and disappearing as you jump or slide, breaking objects which will slow things down for a time and catapults. They do a lot with the limited interactions you have. 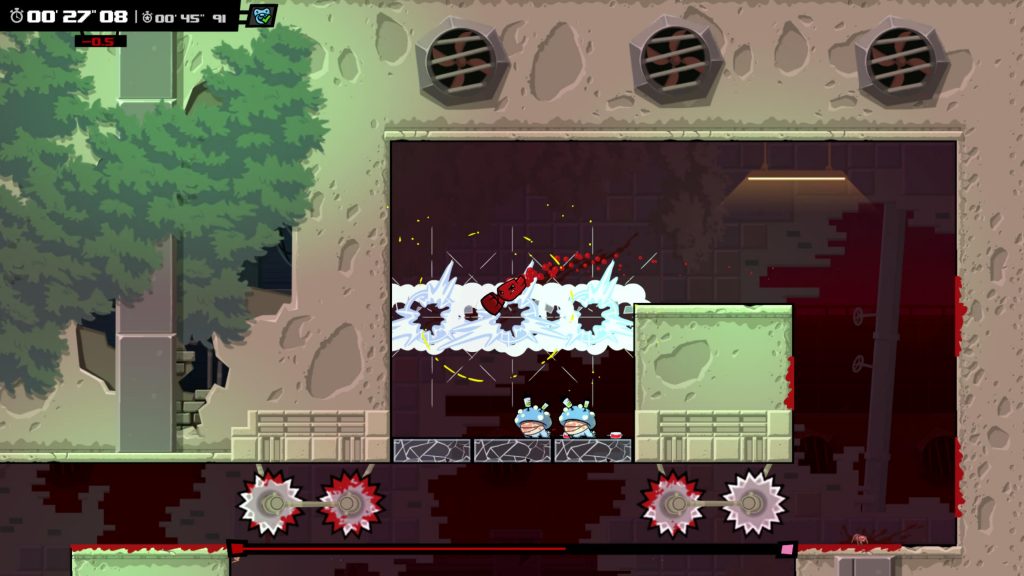 Super Meat Boy did have an element of puzzle solving but Forever takes it to another level where quite often it won’t necessarily be your skill holding you back, though you’ll need plenty of that too, but you’ll need to actually figure out what you need to do to progress first. There were even times later on where I felt that the game had generated an impossible section as I could not see how to get through it, but this was never actually the case and through luck or judgment I’d find the sequence of manoeuvrers I’d have to do to progress eventually.

You have infinite lives to complete a level, so if you do die (which only takes one hit) then you’re put back to the previous checkpoint pretty much instantly and you’re able to try again. Beyond getting through a level you also have a time to beat which will net you an A+ if you make it (time resets to when you hit the checkpoint when you die, kindly), and if you also complete it without dying (doesn’t have to be on the same run) then you’ll net yourself an S. Getting an A+ will unlock the Dark World version of that level which will have a similar layout but with additional hazards and will just be that much harder. 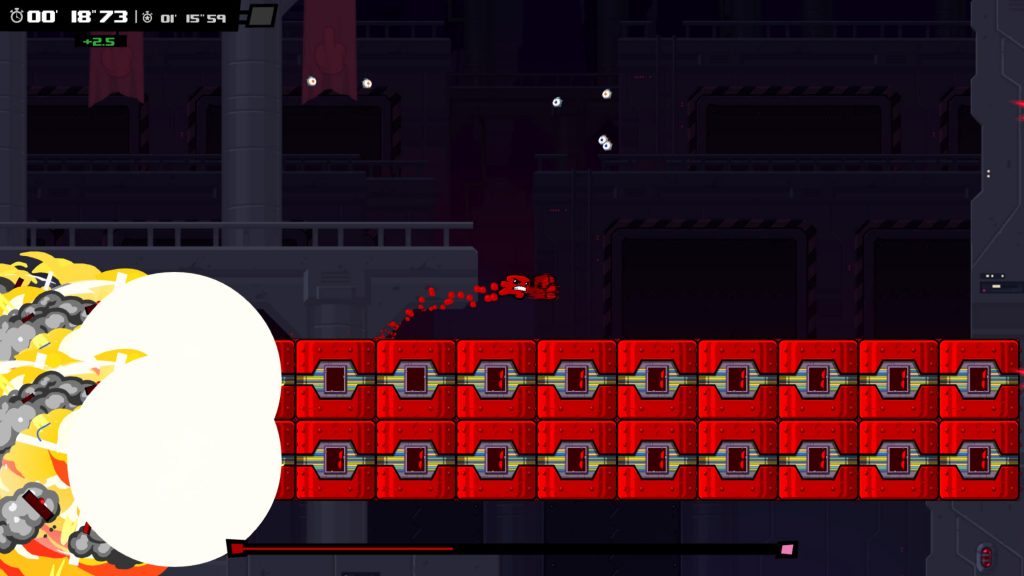 Each world ends in a boss fight which generally involve avoiding attacks until you can get a barrage of punches in yourself. They offer a similar challenge to the levels but aren’t the most interesting part of the game. You can also find pacifiers hidden in certain levels which will help you unlock different characters (though they all control the same, unlike the last game) and there will be a warp zone hidden in each world. If you find and enter this then you’ll be taken to a little mini-game. There are a couple which play with the platforming mechanics, like trying to climb as high as you can for a Test Your Might game like in Mortal Kombat but you’ll also get things completely out of left field, usually referencing old Nintendo games like Punch-Out. They are fun but some are brutally difficult, much like the rest of the game.

Completing everything, especially to A+ or S standard will take quite some time but because the game is randomly generated you can start another save using a different seed or even start a New Game+ on your completed game if you like. I do find the difficulty can be a little uneven thanks to the randomly generated nature of the levels, with one level causing me all sorts of problems and the next couple being far simpler affairs but I’m sure I probably had similar ups and downs with the last game too. 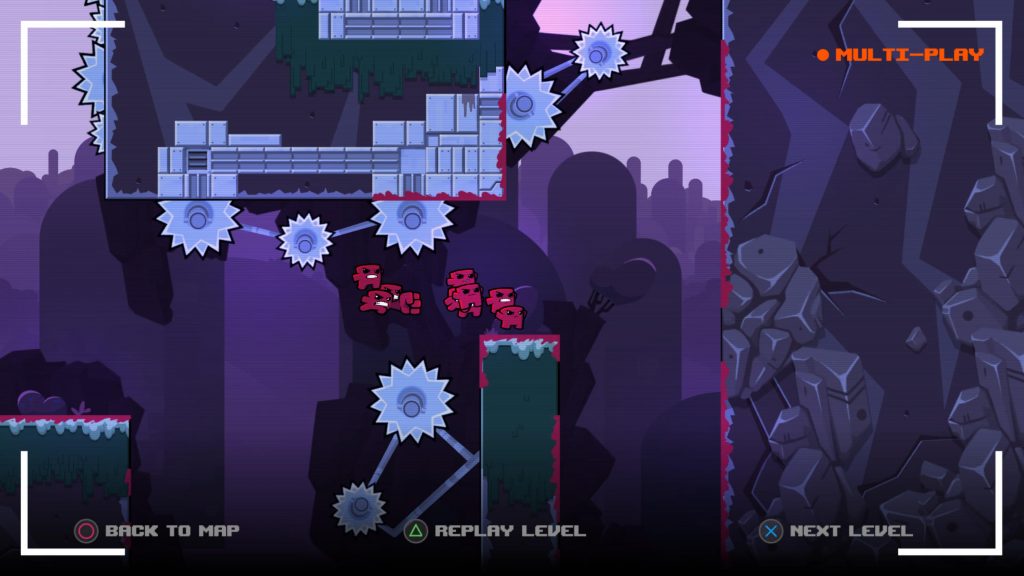 Presentation-wise things look how I remember the last game looking, but actually looking back things have been cleaned up quite a bit now and your character is larger and sharper on screen. You can generally see all the information you need to with the hazards standing out although the speed at which you move may prevent you from taking it all in the first time you see it.

The music is a bit of a let down, not because it’s bad but it’s not particularly memorable and I adored the Super Meat Boy music, I even had the Chapter 1 Dark World theme as my ring tone for a long time. It enhanced the game, providing not only great tunes but also a semi-narrative as Meat Boy got deeper into the game and the music developed with it. I’m talking about the original release here, not the re-release that changed the music which I wasn’t so hot on. Anyway, Forever‘s music is fine, it doesn’t grate despite the fact you’re going to be hearing it a lot on loop as you die over and over but it won’t stick with you either. 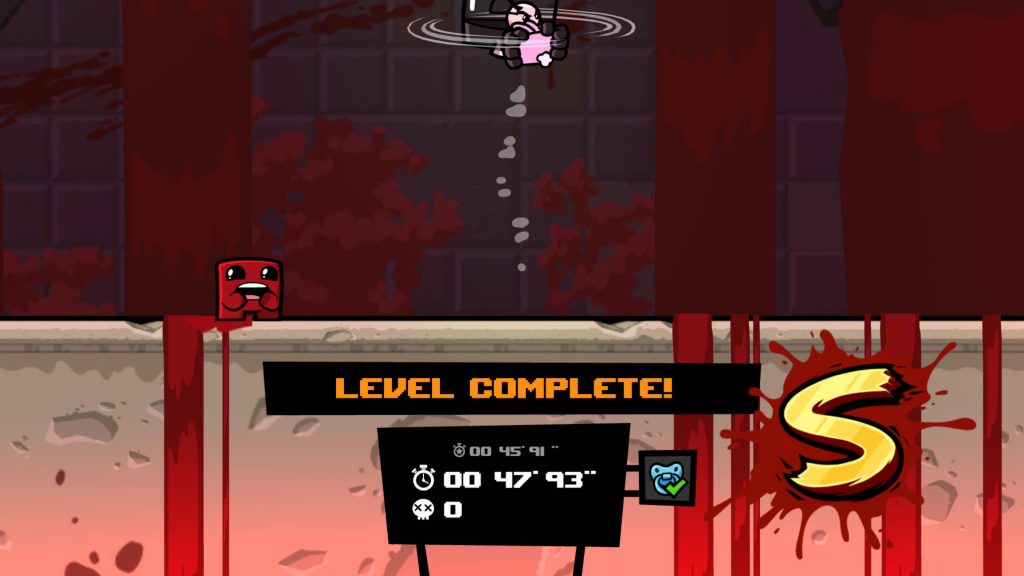 Overall I do like Super Meat Boy Forever, but it had an incredibly tough act to follow. The change to longer levels does mean that once you’re on a later checkpoint you do feel forced to complete the level no matter how long it takes which is less friendly than the short levels of the last game but everything is doable with enough skill and patience. They do a lot with the simple controls and the puzzle-like level design can be very clever, although you’ll sometimes have to fail a few times to get your head around what is being asked of you. It’s very different, not strictly worse, but Super Meat Boy (with the original music) retains that special place in my heart.

Super Meat Boy Forever
7 Overall
Pros
+ Same solid challenge
+ Randomly generated content extends game life
+ Some fun, but incredibly tough, side content
+ Enjoyable cutscenes
Cons
- Can take some time to figure out what you actually need to do
- Difficulty can be perverse
- Music is only okay
- Randomly generated levels can lead to uneven difficulty
Summary
Super Meat Boy Forever changes from a difficult, traditional platformer to a difficult auto-runner. It retains a lot of what people like about Super Meat Boy but the change from pure platformer to what amounts to a two button control scheme might put some people off. What the designers achieve with those two buttons is something to be applauded however.