Terra Trilogy is a compilation of three games:  Terra Lander DX, Terra Lander II: Rock Slide Rescue and Terra Bomber.   This is a series of old-school, arcade-inspired shoot ’em ups that share a minimalist design, a penchant for classical music and an uncompromising level of difficulty and all three games come from the Leeds-based developer DM Media (otherwise known as Daniel Gallagher).

While two of the games, Terra Lander and Terra Lander II, are inertia-heavy takes on the 1979 classic coin-op Lunar Lander, the remaining one, Terra Bomber, is inspired by 1981’s Scramble.  They’ve all been around in one form or another, starting out on iOS and Android and we’ve actually reviewed Terra Bomber already (another Metacritic exclusive, but we’ll be giving it another look with fresh eyes (even if it was just six months ago).

Each title here is a separate game with their own trophy lists and icon on your home screen.  There is no overarching menu or program to launch, you redeem and activate each game separately (at least when using review codes).

Terra Lander DX is a simplistic physics based shooter where you have to navigate through tricky tunnels lined with guns and fuel dumps and land on a target pad.  It’s exactly the sort of thing you’ll be familiar with if you’ve played Lunar Lander, Thrust or a countless other variations on this theme.

We’ve never really been fans of those physics-heavy shoot ’em ups and that’s because we don’t like wrestling with thrusting and rotation with fussy controls and the spectre of imminent death hanging over us but Terra Lander‘s simple twin-stick set up really improves the experience.  Here there is no rotation, you just thrust around using the left stick and the right stick is used to shoot in whatever direction you point (no fire buttons, another win).  So getting around in this game is very intuitive.

There’s not much to think about here.  You’ve got a time limit which is relatively generous and you need to watch your fuel (which is consumed by thrusting and shooting) but aside from that the real enemy here is the environment and any pesky gun turrets.  Well, that and inertia.  The game’s twenty stages have a moon-like gravity with very little in the way of friction so you can easily find yourself moving too fast and dying a peasant’s death.  But in terms of the controls and the level of inertia, it’s all set just about right. 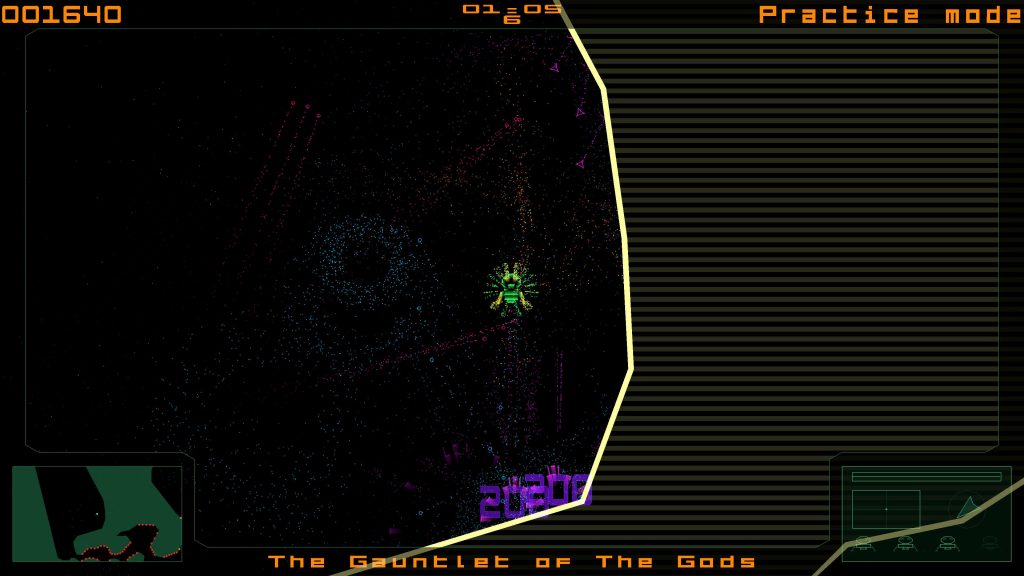 There are a couple of issues though.  The first is that the level design can eventually let the game down.  I’m looking at you Level 11.  This bastard of a stage has you being immediately assaulted by homing rockets.  Then it leads you down a series of very narrow tunnels where the slightest clash of pixels equals an immediate death.  While your bullets bounce off of the surface (this is a great thing), so do enemy bullets and so this whole level is a stressful gauntlet to run.  But then when you get to the end a gate opens up with three more turrets overlooking the target landing pad.  And then you, inevitably, eat total shit because there isn’t enough room to avoid the incoming fire.

People have been moaning about this level ever since the game came out and it’s a shame that it hasn’t been refined or tweaked, especially with this game being the ‘DX’ version.  Later levels (notably 16 and 20) also spike the game’s difficulty this way and it’s a shame because it is pretty much game ruining.

The other issue is that the game is big on particles.  When you thrust there are particles everywhere, when you shoot your bullets hit the surface and particles are thrown up into the air (or space I guess).  With your bullets (and the enemies’ also) bouncing around among all these particles, it can be tricky to see exactly what is going on at times.  It’s not as game ruining as the difficulty, but it can be annoying.  That said, visually the game is actually quite pleasing with its simple, but smooth, vector design.  It’s complemented by some good sound effects and a surprisingly enjoyable piece of classical music that gives it all a bit of a cinematic, 1980s sci-fi kind of feel.

It’s just a shame about those difficulty spikes because Terra Lander is close to being very good indeed. 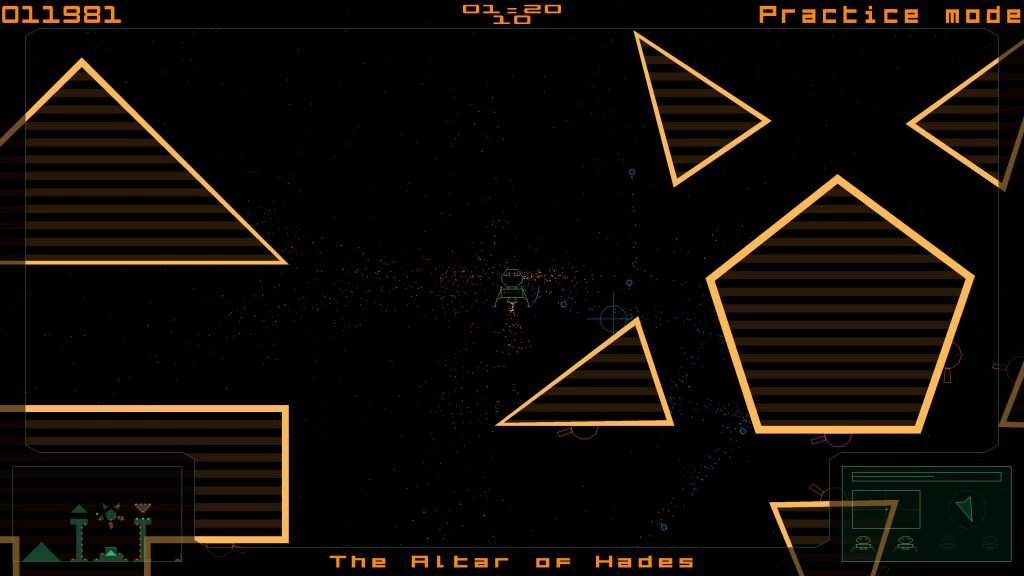 This follow up to Terra Lander uses the same excellent controls but adds a couple of twists to the gameplay.  Instead of making your way to a landing pad to finish the level, now you have to visit multiple pads and rescue people there.   Once you’ve visited every pad you need to fly up to the top of the level and exit.  It doesn’t fundamentally change anything except that you have to explore the levels a bit more and it takes a tad longer to finish them.

The other difference is those rocks that show up in the game’s title.  These exist in little rock piles and can occasionally block your route ahead.  They can be lifted with L1 but you will burn a lot of fuel doing that and so it just takes a bit more planning to make sure you can finish the level.  Aside from that though, Terra Lander II is much the same as the previous game.

Like that game, it’s pretty tricky and indeed it gets tougher earlier.  However, this is compounded by the level restart system.  In the previous game you can make progress in Practice Mode but here you have to beat a level in the regular Arcade Mode before you can practice it.  This makes things a lot harder.  To explain this better, in the first game if you beat level 3 in Arcade Mode, you can then start the game from that point.  In Terra Lander II, you can’t do that.  Which makes things exponentially tougher.

While the game has very similar presentation to its prequel, it does tone down the particle effects a bit which is welcome but otherwise things feel pretty similar even down to the classical music and Stephen Hawking style voice samples. 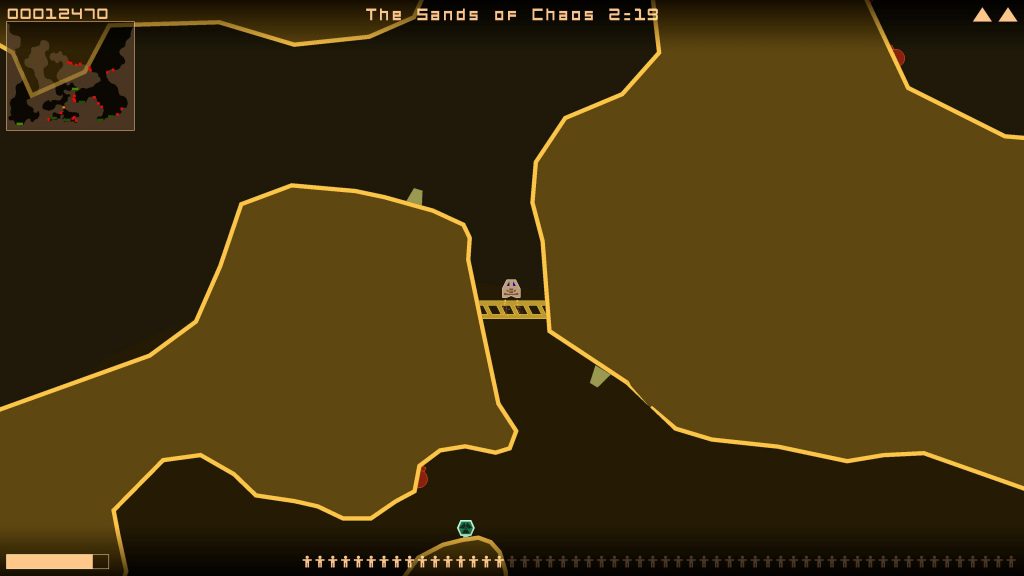 So, this is the game we reviewed before.  Oddly, despite this being its own game, redeeming it created a brand new instance of the game with a new trophy set despite me being the person who played and reviewed the game previously.  That’s quite odd.

We can confirm this is the same game as before though and so what you get is a minimalist Scramble clone which means you fly horizontally forward as you shoot and bomb your way through the various canyon-like levels.  The problem here is the same as the one in Terra Lander II:  progress doesn’t count and so if you want to get through the game, you’ll need to do it from the very start in Arcade Mode.  That’s fine except that the game’s levels feel too long (they’re about four minutes long but feel longer) and there are some truly bullshit moments where you are in narrow corridors being shot at, making it very hard to stay safe. 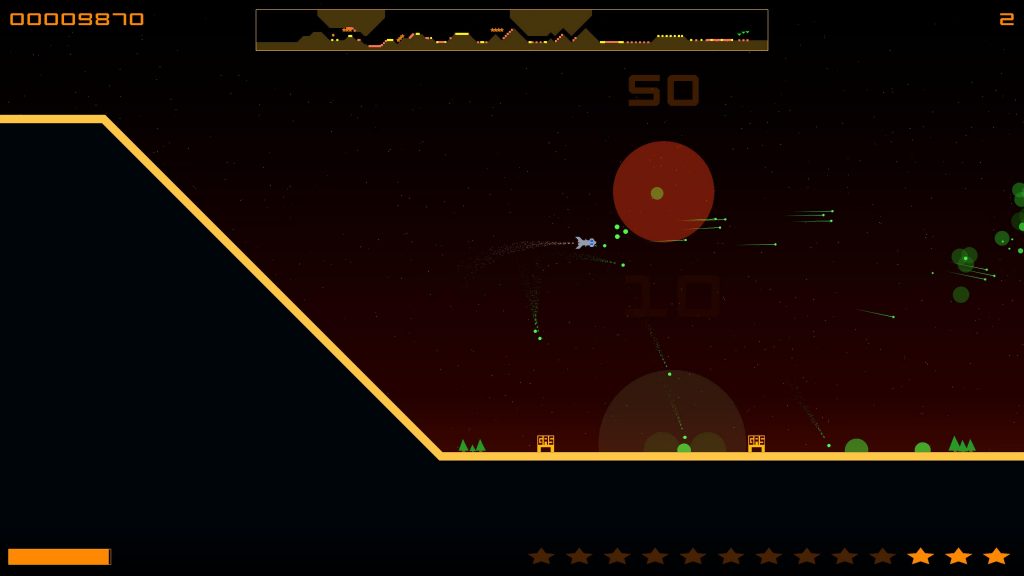 The game shares the same minimalist look as the other two games and that’s fine but as we said before, Scramble is an absolute classic that packs in some good variation in its short lifespan whereas Terra Bomber has no variation and goes on a bit too long.  We rated it a 4/10 last year and can’t see a reason to amend that score.  Annoyingly though, if Terra Bomber was set up like Terra Lander DX in terms of level progress, it’d definitely get an extra point.  It’s a shame they didn’t revise that but I guess our review didn’t sway DM Media enough to make any fixes.

We’re not sure what the price will be but these three games retail for £7.99 on PSN each (which is a bit too much in our opinion).  We’d say that £8 for the collection would be a fair price and there is some enjoyment to be had here if you see it in the PSN sales a few months from now.  But unless they relax the game progression here, Terra Trilogy is tough to recommend and indeed we’d say that you should save your money and just buy the first game here.  There’s definitely potential here but as of now it’s all a bit of a missed opportunity.

Terra Trilogy
5 Overall
Pros
+ Really good controls on the two Lander games
+ Each of the three games does have some redeeming qualities in terms of gameplay
+ Presentation isn't bad
Cons
- It's too hard to make progress in two of the games
- All three games are let down by inconsistent level design and difficulty
Summary
Terra Trilogy is a compilation of three shoot 'em ups that take a lot of inspiration from some early arcade titles and they all have potential but are let down by some horrible difficulty spikes and cheap level design.