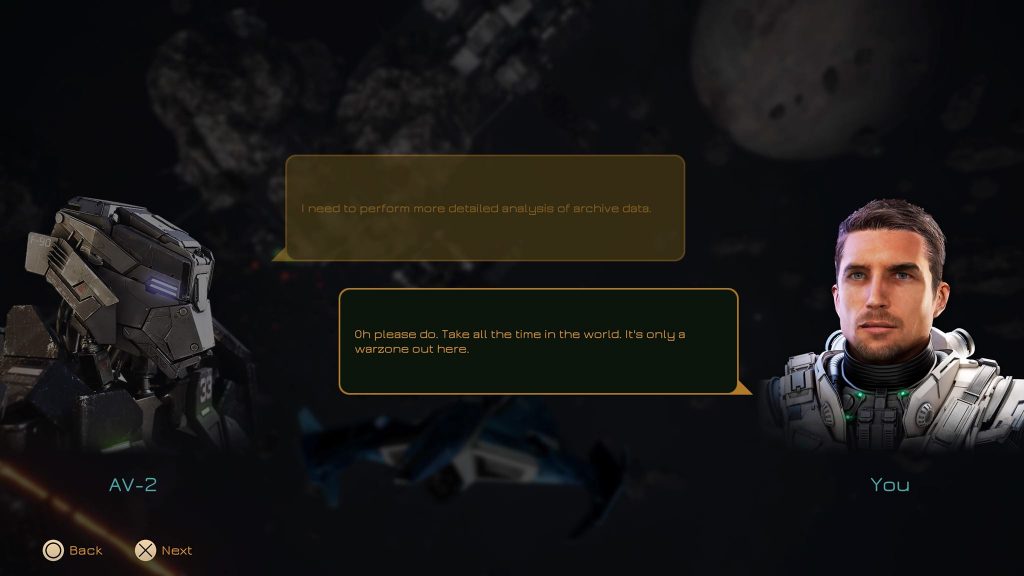 I’ll never understand why the market for stylish, space-faring shooters just up and died with this generation. The arcade wonder of the likes of Rogue Squadron is something that I dearly miss about gaming currently and instead the space has been taken over by simulator style space romps such as Elite: Dangerous or over-simplified abominations like the airborne combat in Star Wars Battlefront. The appetite to create games like this is so low, that whenever I see a game that vaguely resembles a real time action star ship shooting experience, I must jump right on it to see whether it is anything close to what I have enjoyed before.

Unfortunately, there are few games that come close to the feeling of flying around an X-Wing, taking on all-comers with superior firepower and dogfighting prowess. The likes of No Man’s Sky and Eve: Valkyrie came close; however, these lacked the vital component of story-based missions and varying tasks to complete to tie it all together. Mistfly Games seeks to try and bring back the classic style with Subdivision Infinity DX, a narrative lead 3D space shooter with retro sensibilities that hark back to the NES era of gaming, taking notes from Guardian Legend, Gyruss and many others. 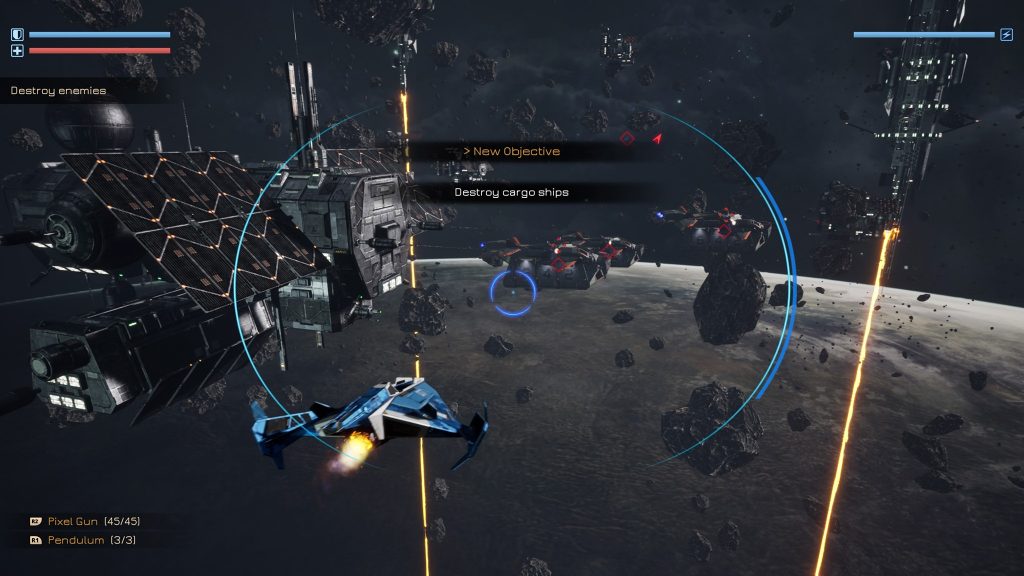 The retro gameplay style is apparent when you boot up Subdivision Infinity DX for the first time. With this and the fact that the game started life as a mobile game as titled minus the DX moniker, there is very little room for simulator style complexity. The gameplay mostly consists of flying about in your corvette class space ship as it blasts through enemy ships, dreadnoughts and capital ships to complete missions. These missions ranging from shooting at turret-based defences, to navigating minefields and downloading data by flying close to nodes on various asteroids and space stations.

Your chosen craft in Subdivision Infinity may not handle as you expect from a game like this. Forward momentum is controlled by the left trigger and instead of flying like a plane with a constant motion, instead the craft handles more like a V-TOL aircraft, one that can strafe and ascend or descend with a simple movement of the left stick. At first, I was taken aback by this. It seemed that the movement was jarring and incorrect, however, when I got used to this movement it felt more intuitive as I progressed. For dogfighting I was able to strafe past lazer blasts and was able to shake off homing attacks with minimal training and it began to feel quite good to fly through. This control method also allows for simple course correction that is missing in some space or airborne fighting games which can eliminate a bit of frustration when trying to manage your crafts shield and health supply. 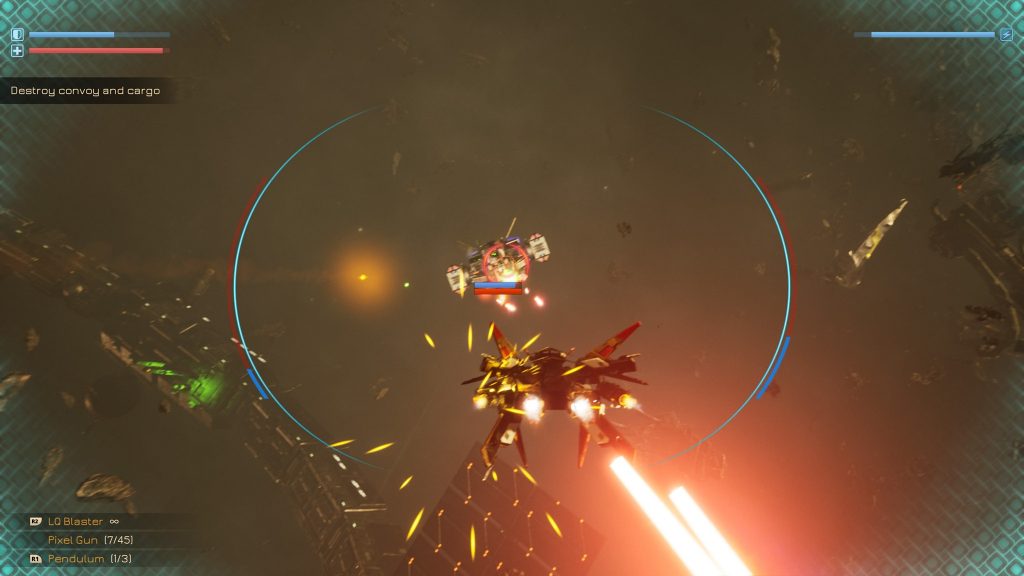 This is not to say that Subdivision is easy by any means. The game features quite a challenge as you progress through and unlocking new ships and weapons becomes more of a necessity as capital ships and battle cruisers amp up the action. These ships are gained through collecting materials, either through downed enemy crafts or in Subdivision’s exploration missions, which are peppered to the brim with discoverable blueprints and asteroids full of rich iron and other metals. These side missions are a welcome departure from the typical fly and shoot missions and offer a chance for you to sleuth your way through a star-system to hunt down the materials and blueprints needed for the upgraded ships.

Unfortunately, the title is prone to some hiccups along the way. The narrative isn’t the greatest and feels entirely flat. You play as the pilot of Rebel-One, a captain who would probably pick the renegade option in every Mass Effect conversation because he thinks he is funny and edgy. This creates a protagonist that is very hard to enjoy as a character and one with dialogue that seems almost cringeworthy and flat. The supporting cast isn’t much cop either, they range from the robotic space station operator to the sergeant of an elite team of starfighters that probably quotes Aliens far too much in his spare time. As essentially quest givers, these characters add little more than a brief exposition of your missions and when these missions don’t vary much from “Shoot everything until it burns” there is not much to remember in the end. 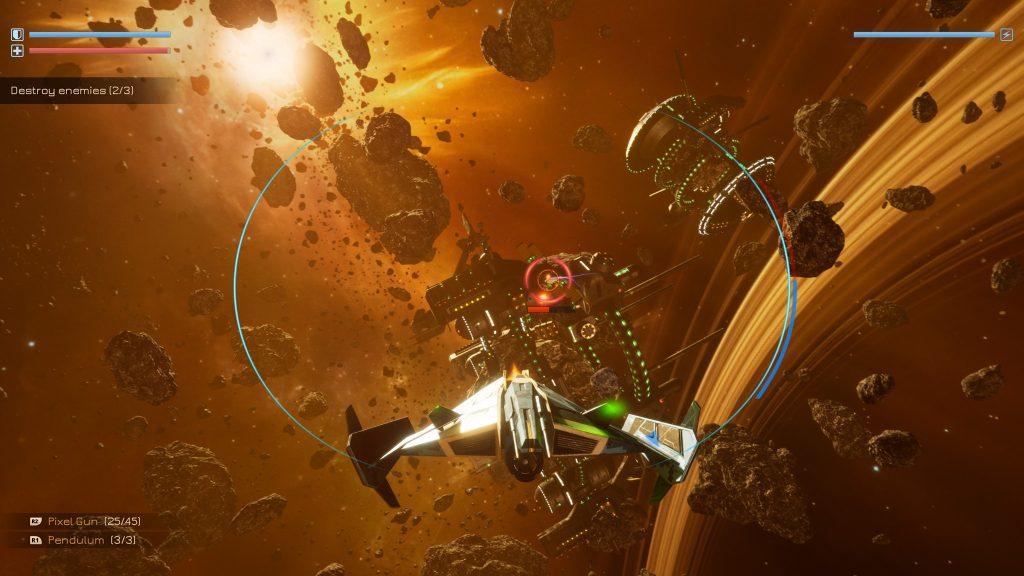 Presentation wise, Subdivision has its moments in the visual and audio department, but both can be a bit jarring. The soundtrack doesn’t impress at all with its repetitive and dated sounding mix of techno and bass that is too loud for its own good on default and fails to really make you feel immersed. Graphically, you can tell that this is a port of a mobile title. However, I will say that this is one of the better looking mobile to PS4 ports, with some of the vistas providing some derelict splendour as you blast through the remains of ships. This will only really bother if you look up close at stretched textures and occasional pop-in. Luckily, as you will spend more time dodging enemy fire and returning in kind, it becomes a lot more serviceable.

Subdivision Infinity DX is a solid attempt at classic space-based dogfighting games of the past. It’s just a shame that the presentation and narrative let the side down. If you can look past these, then you will likely find a good time in amongst it all, just make sure to manage those expectations.

Subdivision Infinity DX
7 Overall
Pros
+ Responsive controls that are easy to learn
+ A fair ramp up of challenge with the ship building progression system
+ Completionists will appreciate the unlocks for ships and weaponry
Cons
- The visual novel story approach feels stilted and unnecessary
- The soundtrack sound can get annoying and repetitive
- Graphically, you can tell that this is a ported mobile game sadly.
Summary
Subdivision Infinity DX is a solid and fun space shooter for those who have been missing an arcade-style skirmish in the stars. however, It is let down a bit by a non-committal story, slightly off graphics and a grating soundtrack.