I’m a sucker for a good beat ’em up and Subaka Studio came good with Redeemer‘s release in 2017. Two years on, a comprehensive edition has landed on current consoles and I now have the opportunity to see what I’ve missed. 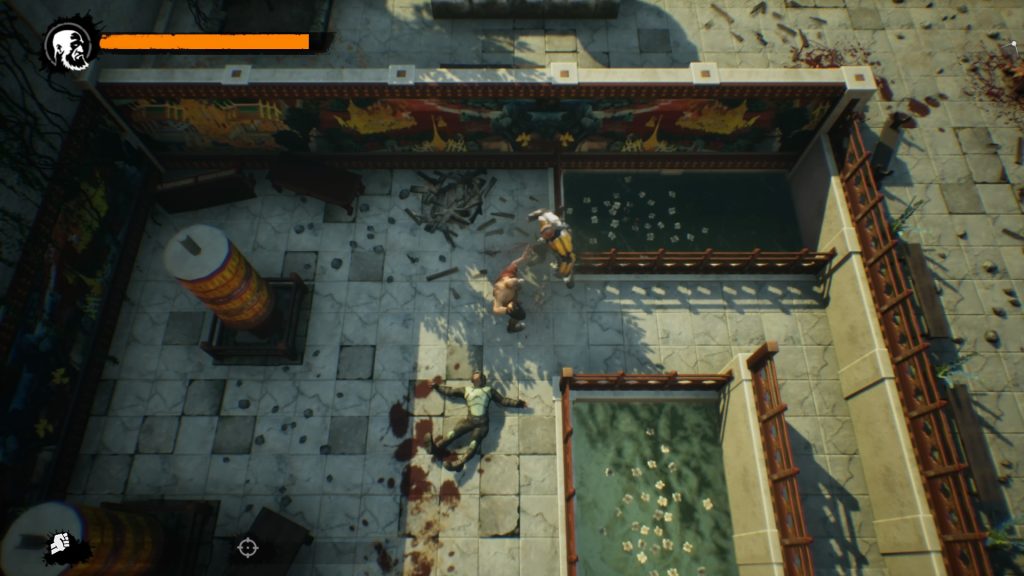 The tale is pretty simple. Our hero Vasily, is a monk whose monastery is invaded by militant forces. Over the course of five hours, you’ll fight off the hordes of armed fighters and uncover more about your past and the opposing force. It’s not deep or brimming with surprises but it is handled well with some animated scenes bookending each of the game’s three acts.

Redeemer: Enhanced Edition‘s combat is very accomplished. Vasily is handy with his fists and feet with some basic combinations at his disposal. You can mash out some handy scraps but, as more gets unveiled to you, combat begins to expand. Parries can repel incoming attacks with some simple timing, firearms control well and give you a ranged option. Environmental kills come into play in many of the game’s colourful arenas. Finally, you have blunt weaponry on hand which can deal significant damage to the game’s heavier enemies. I felt these took a while to feel useful but, by the time the game reached a climax, I was glad to find the more heavy-duty hammers.

There’s a variation on display which prevents the game from feeling stale. It’s welcome, given the game’s length is a handful of hours. Chapters can be over within twenty minutes and checkpoints are regular. Enemy composition forces you to think about your approach. Some fodder can be punched out of existence but others require a parry to open them up, brutes have to be goaded into charges before they’re vulnerable and so on. If all else fails, firearms can be used to thin the ranks. Alternatives were always available. Weaponry from fallen enemies litter the floor and, whilst they do break, you’re rarely standing still or empty handed. 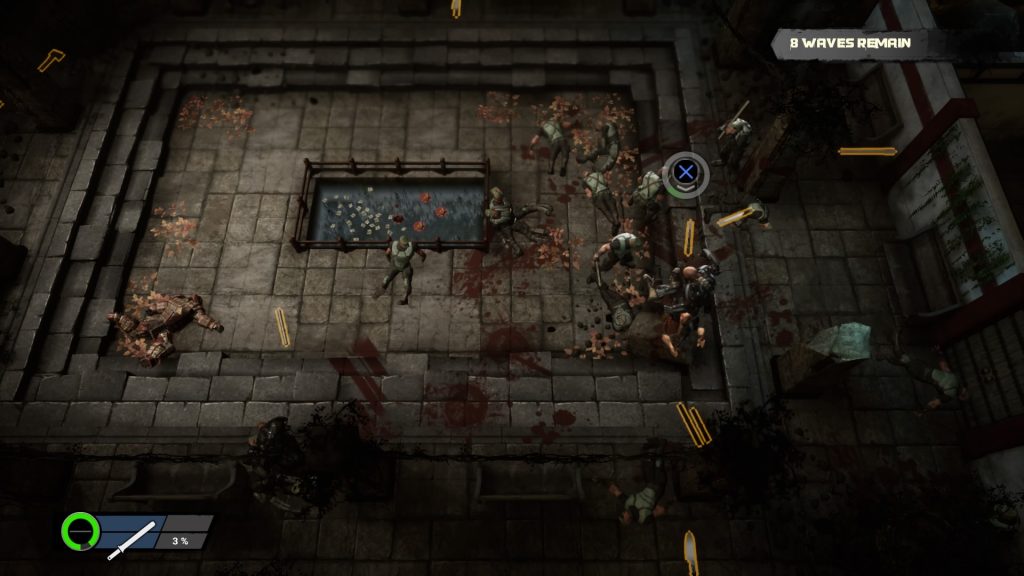 Stealth is surprisingly useful. It’s rudimentary but sneaking up behind a guard and taking him out can be satisfying. Defensively, aside from parries you do have a combat roll. It has a wide range which can make avoiding enemies on narrow, treacherous paths difficult. Outdoor areas prove tricky when drops to your death are concerned. Once inside, your roll becomes a good means of escape and it’s rare to find yourself trapped.

Redeemer: Enhanced Edition‘s sense of progression is strong with each of your abilities gaining in power as you play. Collectibles can be found along the way to give an attribute an extra boost. Perks are also unlocked as these abilities reach a certain level. The adventure seems well paced with almost all of the options being unlocked by the time I reached the final stage. It’s nice to not feel compromised and to have choices at my disposal for dispatching enemies. 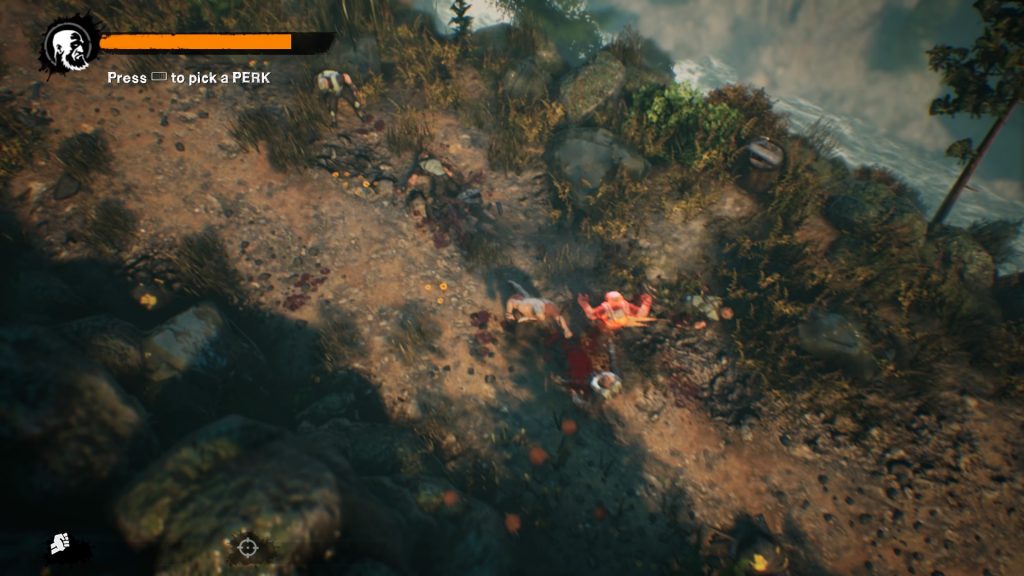 Defeating adversaries is your main source of regaining health which does help pace out encounters and encourages you to stay aggressive. You can regain a slither of health to keep yourself in the fight but numbers will overwhelm you. Redeemer: Enhanced Edition plays swiftly with a great sense of momentum through the campaign. There’s a handful of bosses to tackle which perhaps let the side down a little. They’re not bad but they tend to be big brutes supplemented by fodder. The latter bosses do try to use arenas or gimmicks to freshen things up. It’s a shame they don’t truly push the combat to a new level.

Visually, the game looks fine. It’s not spectacular but the palette makes the action clear enough to follow and fallen foes do nicely react to your toughest hits. You feel powerful as you venture from your monastery into more industrial locales. It’s a pity there isn’t more variation to it with factories and compounds making up the majority of the game. It starts to blend together and whilst the lighting is well done, there are moments where the framerate begins to drop. I’ve also had a couple of crashes. They’re not frequent but I certainly had my heart skip when it happened twice in quick succession.

The voice acting is well done with none of it sounding especially out of place. Our protagonist is characterised well and the small cast helps keep the story light enough not to slow thing down. The sounds of combat have a weight to them and the music does provide a decent backdrop to the fighting, even if it feels a little understated. 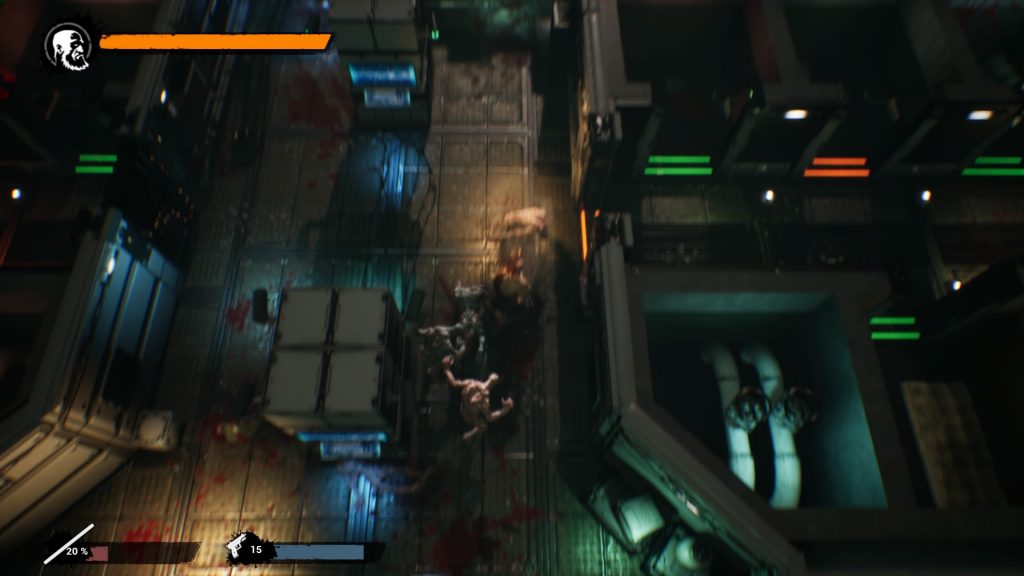 If there’s one thing Redeemer: Enhanced Edition really misses it’s an incentive to keep playing after credits have rolled. Aside from the hardcore difficulty, you have arenas which you have to discover during the main game. You can then participate in a survival test of ten waves which doesn’t really provide the challenge advertised. You can’t tinker with difficulty in these arenas and there’s no real incentive to do well in them. Other collectibles in the game’s environments unlock concept art.

Despite this, I enjoyed Redeemer: Enhanced Edition. The combat delivers plenty of options and the campaign has a great sense of forward momentum. I rarely felt let-down or frustrated by unfair odds. It runs relatively well with some hitches dampening the experience. I would’ve liked to have seen a touch more environmental variety, too. It can feel a little short-lived but there’s some substance to a brawler that could’ve fallen by the wayside.

Redeemer: Enhanced Edition
7 Overall
Pros
+ Fun combat that offers plenty of options.
+ A lengthy campaign that provides a nice sense of momentum.
+ A nice sense of character progression that opens up more abilities as you play.
+ The story isn't deep or new but what's told is told well.
Cons
- The environments start to feel dull and repetitive.
- Not a lot to do besides the campaign.
- Some technical hitches harm the experience and I've experienced a couple of crashes.
Summary
Redeemer: Enhanced Edition's an enjoyable effort with an admittedly short tail. Combat feels weighty with plenty of opportunities at hand. There's a swift pacing to proceedings and, whilst the waves of enemies can feel relentless, the encounters have a variety that keeps it from growing cold. It's a pity there isn't much after the credits roll and the environments devolve into industrial hallways. Still, it's worth a look.