The Spyro Reignited Trilogy has released on PS4 giving the PS1 games a lick of modern paint whilst keeping the levels and layouts the same. I’ll come out and say that I didn’t play these back when they were originally released but that just makes it all the more impressive that these twenty year old games, with a few mechanical tweaks, still hold up. 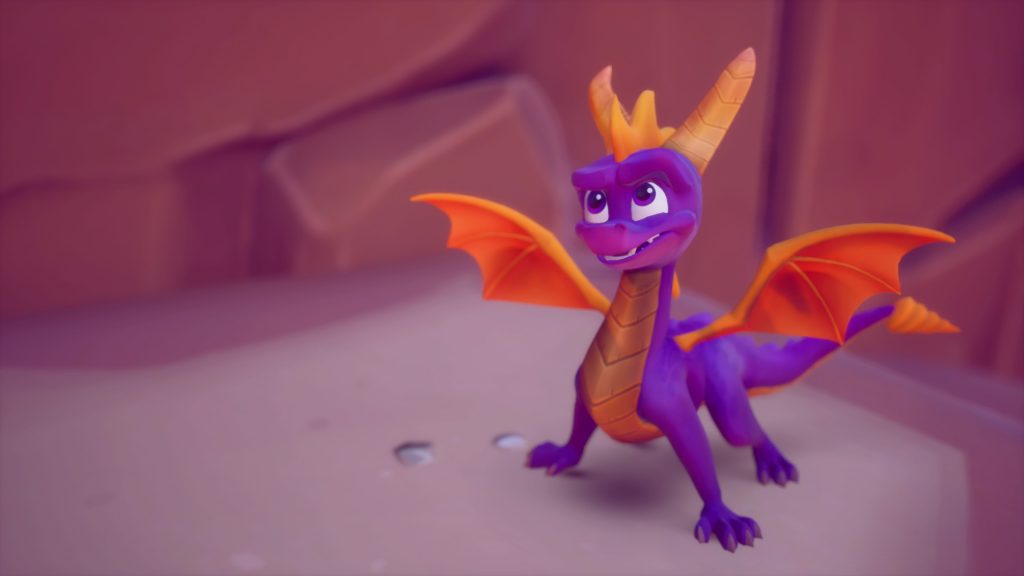 Back from a time when platforming mascots were still a thing and everyone was chasing Super Mario 64, 3D platformers were in their infancy. Control schemes, camera control and the like hadn’t developed a standard yet, although a sub-genre of platformer, the collectathon, was starting to form. The Spyro games belong to this sub-genre.

Each game sticks to this and although what you’re collecting is different getting 100% of the items on each stage is always the goal, though you don’t necessarily have to do that to progress the story. In the first game, Spyro the Dragon, Gnasty Gnorc turns all the dragons into crystal statues and it’s up to young Spyro to rescue them all across the regions of the Dragon Kingdom. Each region has a hub world, which acts as a level in itself, but also has gateways leading to other levels.

Spyro has three abilities to help him throughout his adventure. He can charge to headbutt his enemies, breath short range fire from his mouth to also attack enemies and he can glide to aid him in his platforming. Certain enemies will be immune to charging (usually bigger enemies) and some will be immune to fire (generally those wearing metal armour) so each attack has its use. You use these abilities to explore the levels, collecting all the gems (defeated enemies also drop gems), rescuing the dragons and catching egg thieves. There are also flying levels which give you time limit to collect/defeat eight of four different items/enemies in an arena. The time limit can be quite tight until you get the right route down but they offer a change of pace in an otherwise quite repetitive game.

It’s not bad at all but as you stick with the same abilities throughout you can beat each level 100% the first time you encounter them and you are just doing the same thing over and over. There are boss levels but they aren’t particularly any different, there’s just an enemy that you’ll encounter that you’ll hit, they’ll run further into the level so you chase them, once you’ve hit them three times they’re defeated. The boss battles are a very disappointing element of this first title, with no pattern recognition or clever use of your abilities. But I enjoyed the six or so hours I had completing the first game 100%. 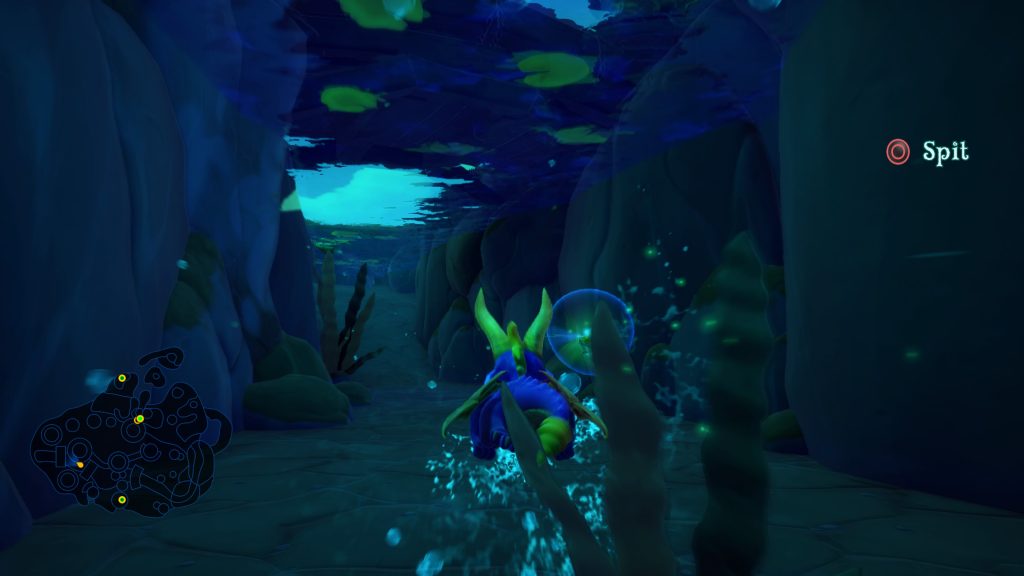 The second title, Spyro 2: Ripto’s Rage!, has Spyro attempting to go on holiday after his first adventure, but instead being pulled through the teleporter into the world of Avalar where the residents have summoned a dragon to help them with Ripto, a menace who they also accidentally pulled in through a teleporter. Again you’ll need to collect everything in a level to complete them 100%, but as there are no dragons to rescue this time you’re collecting gems and orbs with which to power the teleporter to new levels and back home.

The gameplay is mixed up slightly as well, with a minor Metroidvania element where you buy new abilities allowing Spyro to climb certain surfaces and swim underwater. This means, at least early in the game, you can’t 100% levels first time through requiring you to return there once you have the ability that’ll let you access the last few gems. Spyro 2 has more variety in its mini games with Spyro playing ice hockey or riding a mine cart. Boss battles are also far better, taking place in an arena and requiring you to dodge attacks before getting hits in when there’s an opening. They’re not the best battles in the world and the bosses require much more than three hits but they’re far better than in the first game.

My only major gripe is that when you go back to levels you’ve already finished everything, bar the gems you’ve collected, is reset meaning that if you have gained an ability that will allow you to collect something at the end of the level then you need to make your way through the level all over again, killing the enemies as you go, to fully complete it. Resetting certain parts I get, resetting the whole level led to a lot of unnecessary busy work. 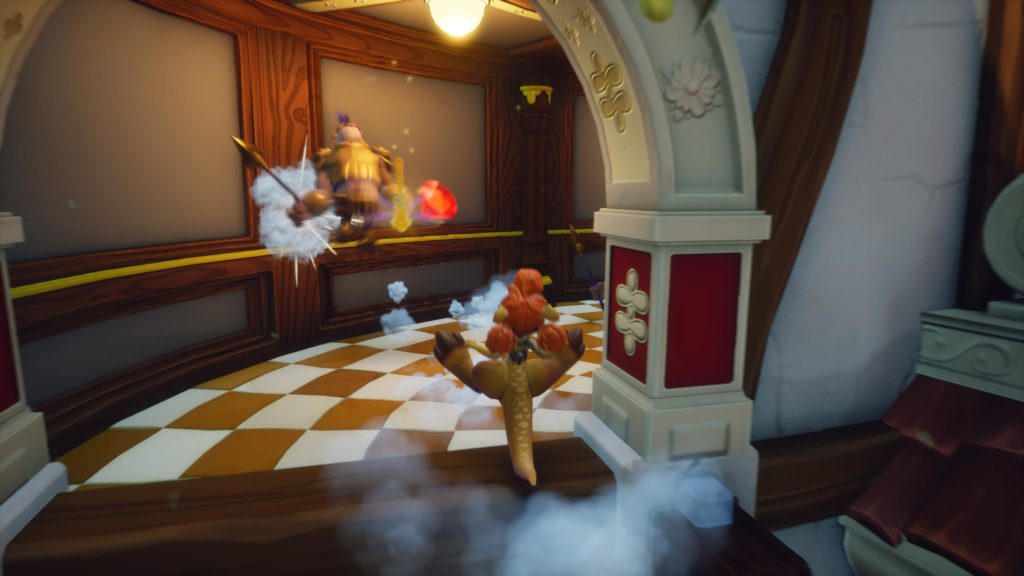 The third title, Spyro 3: Year of the Dragon carries on in a similar fashion to the second. This time all the dragon eggs have been stolen by the Sorceress and Spyro has to go to a land no longer inhabited by dragons to retrieve them. Spyro keeps his abilities from the second game and rather than learning new ones the third game introduces new characters for you to play as at certain points, each having their own set of abilities from a bird who can fire rockets and drop bombs to a kangaroo that can double jump and super jump.

Again this means you can’t complete levels 100% sometimes until you’ve unlocked certain characters. Unfortunately the characters you get aren’t as fun to play as as Spyro himself is so although they add a little variety you’re thankful when you’re back controlling your little purple dragon. Otherwise the levels are on par with the second title, with more mini games and flying sections.

As all the games have received a visual upgrade there isn’t a massive leap in visuals from game to game as I’m sure there would have been back when they were first released. Everything looks very nice however with it all being very colourful. The character designs are great with some high quality cartoon-like animation and that includes the enemies you face which have a lot of character. As you progress through the three games the levels do expand and show advancement in their complexity so you do see some progression, even if they don’t look it at first glance. There is a quite aggressive blur which isn’t too bad in motion but has made getting usable screenshots a bitch and there is the odd bit of slowdown but it didn’t spoil things.

Beyond being a little repetitive the only other major gripe I have with the games is that, for a platformer, the soundtrack is very weak. Remastered from the original tracks there are no catchy tunes and although they tend to evoke the environment I want some memorable tracks from a platformer whereas I couldn’t hum you anything after playing these games for around twenty hours. Not a deal breaker but a bit of a shame. 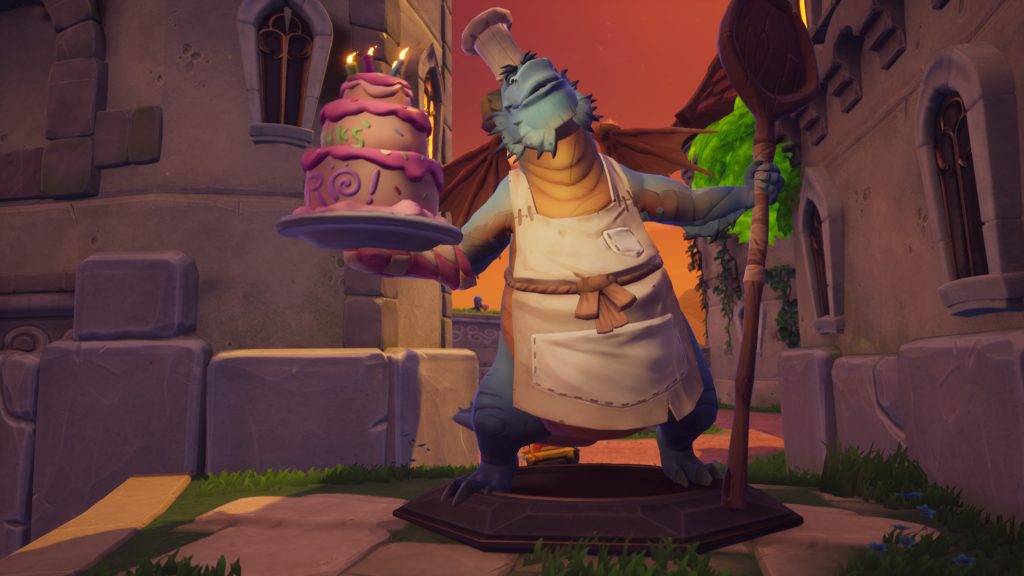 The Spyro Reignited Trilogy is a great package of 3D platformers that hold up surprisingly well. Even if you didn’t play them the first time around, if you’ve got an affection for this type of game then they’re worth a look. Playing them back to back is maybe not the best idea as although they introduce new elements they still play very similarly making them quite repetitive, but you get three enjoyable games of reasonable length for the price of one making this a great deal for existing fans and those, like me, who’ve never played a Spyro title before.

Spyro Reignited Trilogy
8 Overall
Pros
+ Three enjoyable games
+ The new graphics are colourful and full of character
+ Definite advancement between games
Cons
- Can get repeititve
- Bosses are weak in the first game
- Music is unmemorable across all games
Summary
The Spyro Reignited Trilogy offers three enjoyable 3D platformers in one package. As someone who didn't play the original games I had a lot of fun, the minor tweaks to gameplay and the huge graphical overhaul bringing the games up to a modern standard and the desire to get 100% level completion being as powerful as ever.