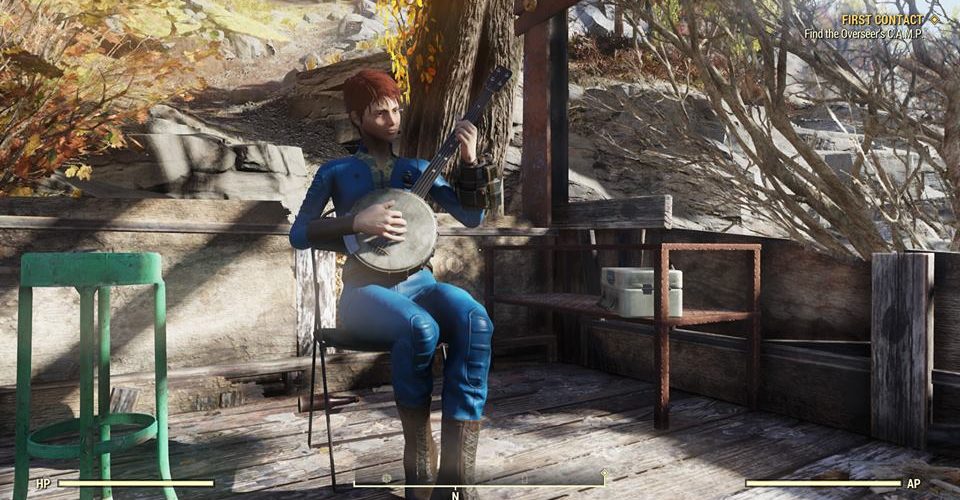 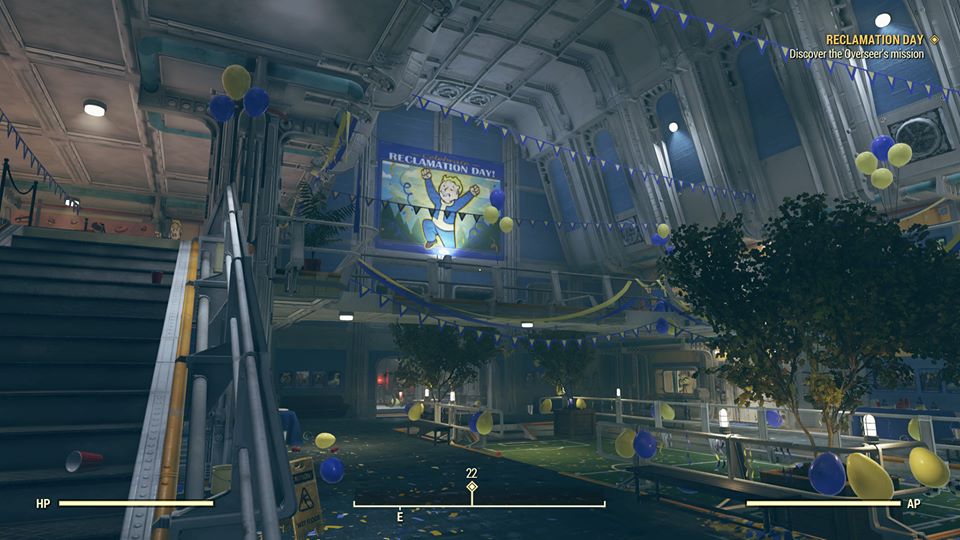 As online games with survival mechanics go, very few licenses can apply themselves better than the world of Fallout. The gaunt, state-sized wastelands devastated by decades of post nuclear decay make an excellent staging point for this kind of title. Especially when considering that Fallout is a franchise that covets the salvaging of junk and turning detritus into improvised weaponry. Couple this with a usual Bethesda open world narrative and you have a recipe for success. Or at least we would have thought when assessing the idea on paper. Unfortunately, the reality is the opposite of a sure thing.

Fallout 76 feels like the direct result of a company mixing up their capabilities with their ambitions. I’m sure Bethesda wanted to release the definitive online survival epic, however their strength is clearly within the single player narratives of previous Fallout’s and Elder Scrolls epics. This is especially felt when discovering that the development team decided to forgo the usual friendly NPC’s and instead go for a world in which the players become the pockets of humanity instead. Supposedly, this was a choice to ensure that players did not mistake killable NPC’s for player characters or vice-versa. The problem is that due to a lack of hub or typical quest giver, all of Fallout 76’s story is instead delivered by audio tapes or discarded files that you find scattered in amongst the junk. 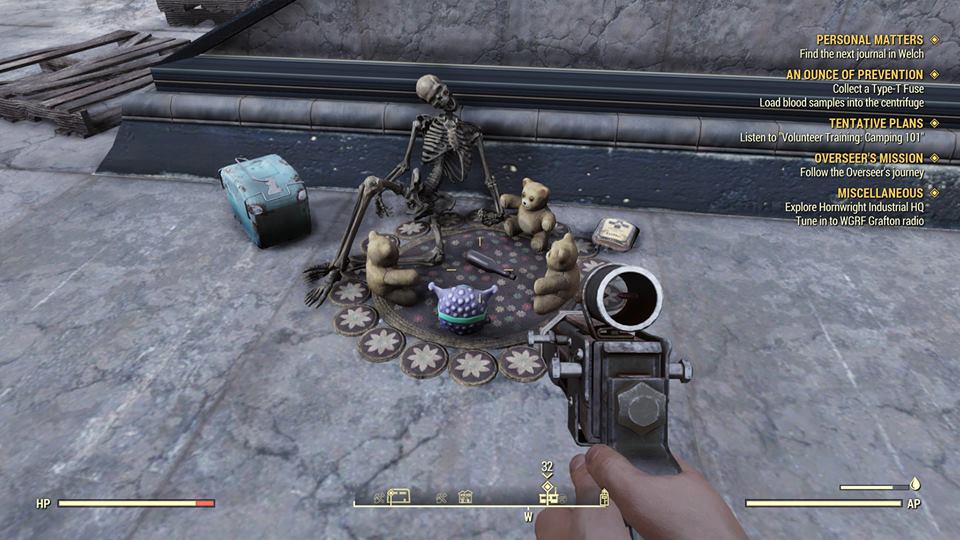 This flies in the face of previous games in the series and often had me questioning where all the established races are. Where are the talking ghouls? Characters that survived the nuclear blasts of the war and spent centuries wondering the wasteland unsheltered? Why are there so many raider corpses around but none living? In my playtime I was unable to find a fitting answer for these questions or for other jarring aspects. Bethesda games are famous for their immersive properties, but Fallout 76 feels riddled with inconsistencies and lack of attention to detail. Another example of this is in the in game radio music. The soundtrack is full of classic 50’s nuclear flavoured pop and songs filled with inappropriate yet fitting subject matter. All of it seems aged and slots into the world fine, however when you get to the trailer song “wouldn’t it be nice” we are treated to a high grade, remastered version of the song. This may seem like a petty gripe, but it’s almost hilarious as to how different it sounds to the next or previous song on the playlist.

The world and the state you reside in is arguably the most important aspect of a Fallout title and this is an area in which that has seen some improvement. West Virginia’s Appalachia takes Fallout 4’s commonwealth and expands on it considerably, bringing back the blue skies and varied landscape for the ride. To compensate for the lack of friendly NPC’s, Bethesda has devised a new bestiary of abominations, some of which take their cues from West Virginian folklore. The most imaginative sight I witnessed was a giant mutated hermit crab who was using a bus for its shell. Beyond this you get your typical feral ghouls, Radroaches and Deathclaws to contend with also for that familiarity. If there is one thing that has been done right, then it has to be this aspect. 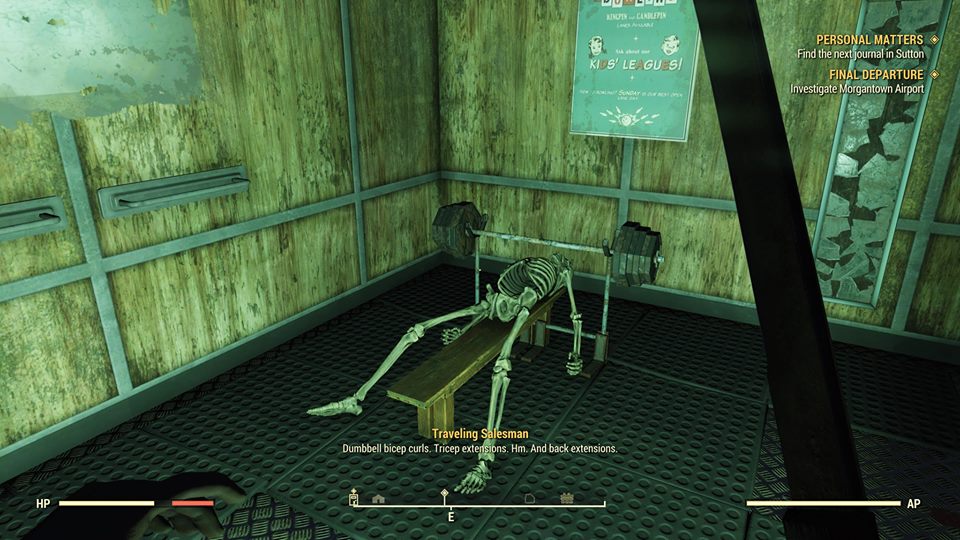 Unfortunately, despite the highs of the landscape, there are still an awful lot of issues to contend with. This is the largest Fallout world so far, however due to the lack of civilisation it can feel barren and lifeless. It doesn’t help as well that typical and untypical glitches and bugs have come along for the ride also. The game is full of them and range from minor graphical glitches that replaces water with black expanses, AI pathing that is either easy to dupe or incredibly unfair due to teleportation to glaringly major issues which result in hard crashes to the console menu screen and relogs that can see you in a different area with all progress on a mission lost. One such occasion threw me back almost a whole level’s worth of experience with the freshly completed mission needing a full do-over.

Another aspect that gets in the way of the explorative world is the nagging and incessant hunger, thirst and encumbrance balancing act that you must perform while playing. You are in constant need to keep your character fed, watered and unburdened of excess junk. If you ignore this then you can expect your action points to be neutered until you rectify the issue. Action points are required to use the new take on the VATS system, as well as be able to walk at a brisk pace freely in and out of combat. The inclusion of this system seems to only exist as another plate for you to spin and while it is thematically correct, it doesn’t necessarily make for an interesting gameplay mechanic, not nearly enough to subset the constant stop/ start nature of Fallout 76. 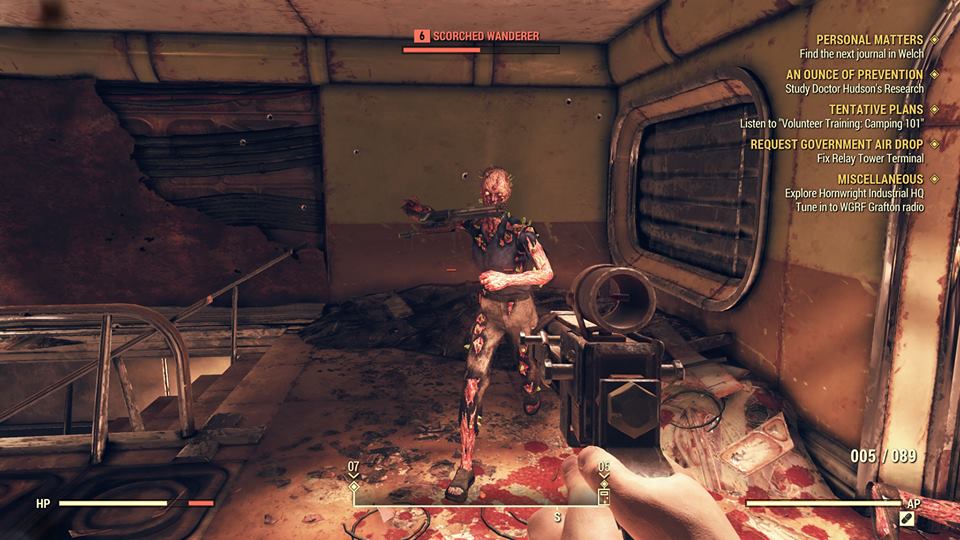 In terms of combat and overall gameplay, Fallout 76 does little differently in terms of real time fighting. The gunplay still feels snappy yet “off” thanks to the stat based weaponry of the universe, meaning that while you may be a sharpshooter in most FPS genre games, in Fallout your accuracy is attribute based so aiming correctly is not the only way to success. VATS return in a strange way, as you are playing an online game you are unable to freeze enemies in place or slow them to a bullet time crawl like you could in previous games. Instead, it acts as an automatic aimbot that autotargets the nearest enemy and uses percentages to determine success of your bullet hitting the target. This is incredibly jarring as often your gun will be completely turned away from your opponent, but a bullet will hit its mark provided the percentage is high enough.

So, with all the above considered, all the concessions made to the Fallout formula to make it work as a multiplayer game, how does it fare on the cooperative side? Not well enough unfortunately. Of course, any game can be improved with coop. Even Aliens Colonial Marines improved exponentially when you were able to convince a mate to play it. The question should be whether this version of Fallout brings anything differently to a multiplayer or cooperative dynamic and the answer to that would be an unfortunate no. The current playerbase and the advent of party chat is also partly to blame for this. I’m sure that when people were thinking of a multiplayer Fallout they conjured expectations of Day Z type emergent story telling or PlayerUnknown Battlegrounds type tactical, on the fly problem solving. Instead we are greeted with rigid gameplay mechanics that do not allow any chance for roleplaying beyond being a shop, loot pinata style missions and deciding who gets to carry the bloatfly glands back to camp. 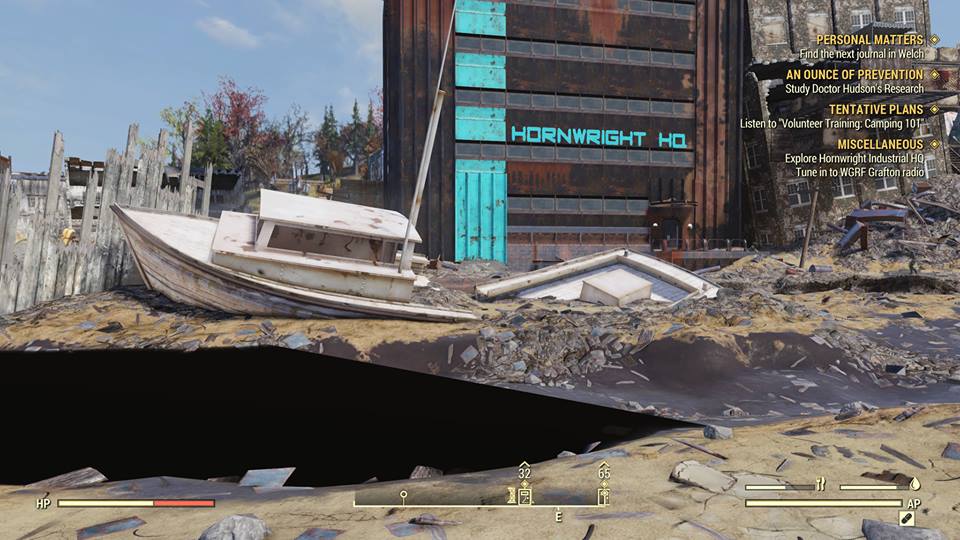 This could have all been improved with a compelling PVP system that allowed two player teams to jump into fights, protecting their gains or lower levelled friends against ambushes by other players. But there is absolutely no incentive to engage in fighting other players. Firstly, a PVP engagement can only begin if the opposing player shoots back at you, otherwise their health will whittle down miniscule amounts, making you nothing more than a mosquito styled nuisance. If you were to kill someone like this then your location is then broadcasted on the map for all to see, allowing others to come and avenge your opponent so that all your ill-gotten gains will be then taken by another player in the chain. This would have been fine if there were servers dedicated to PVP or PVE content, so you could pick and choose which you would prefer, but this is every server, so this is the only choice you get.

It is real shame that Fallout 76 could not live up to the obvious potential that it had. It had every right to be the ultimate survival game of its type and all the right elements on paper. But due to baffling choices on the part of development and unwelcome inclusions the game is very hard to recommend, even for the discounted prices that we are currently seeing within two weeks of launch.

Fallout 76
4 Overall
Pros
+ When people play together, there are moments of brilliance to be found
+ Plenty of lore to be found, albeit through files and audio clips
+ The new creatures are incredibly inventive
Cons
- Constant crashing and bugs, despite a huge update within a week of launch
- The lack of friendly NPC’s is a glaring and baffling omission
- Encumbrance, hunger and thirst status effects get old very quickly
- PVP combat has no incentive
Summary
Despite what many would say, Fallout 76 could have worked on paper. What could have been a brilliant co-op adventure in the Fallout world has turned into a wasteland of poorly executed ideas and flat, dated mechanics. Ironically, despite the a multiplayer focus, the wastelands of Fallout has never felt as barren or lonely as this.