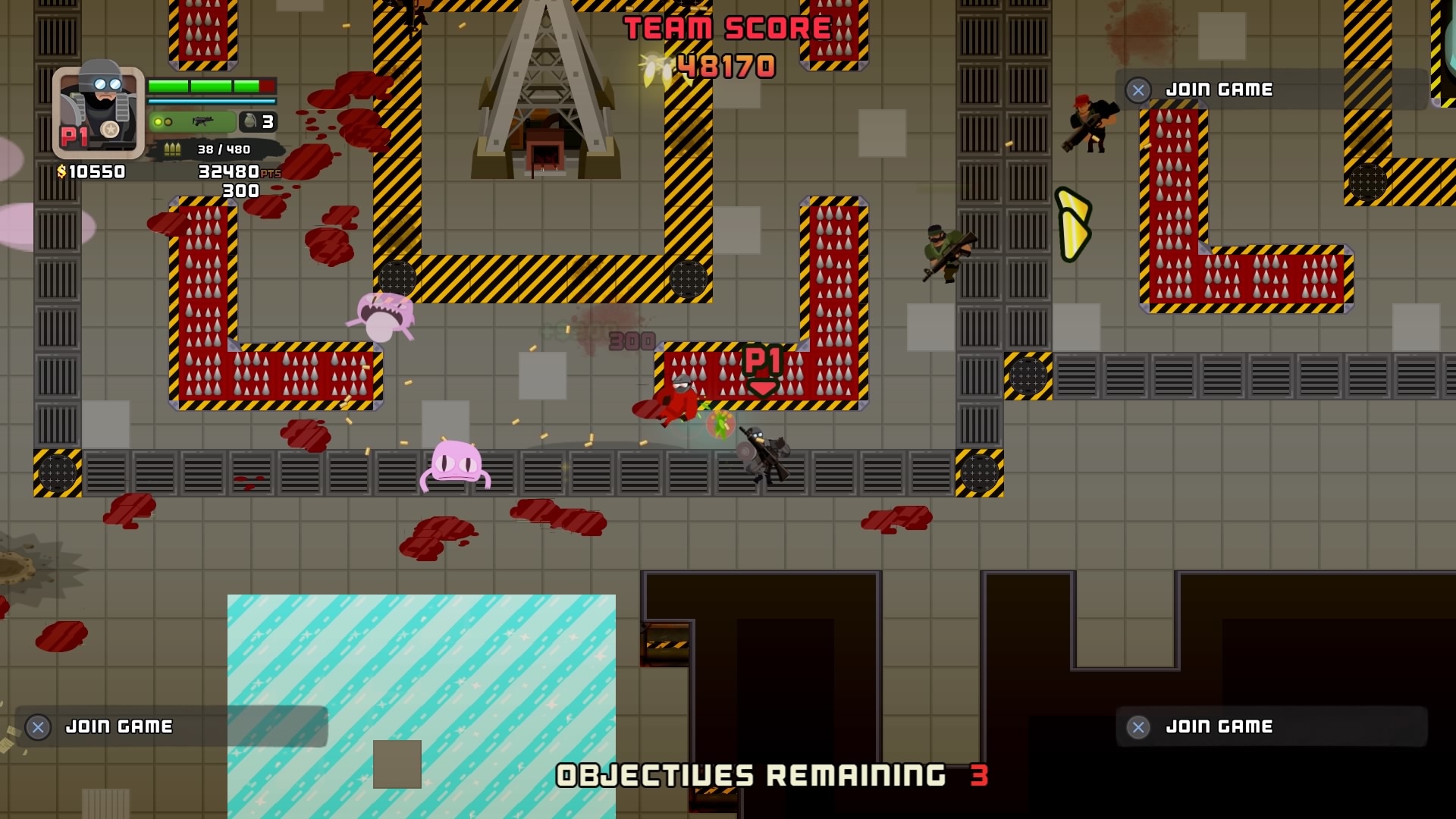 The PS4 is home to many twin-stick shooters and Tango Fiesta is the latest.  This lo-fi effort sees you and up to three local friends taking on small armies of enemies across a series of levels that that riff on various action movies.  The game combines straightforward twin stick shooting and some roguelite elements to create a fairly typical arcade title.

The plot, which arrives by way of text and a few images, sets up the running action movie gag and this carries on into the character select screen which allows you to pick from characters with more than a passing resemblence to Arnie, Robocop and some other guys who I couldn’t quite place.  During the game you’ll see levels based on Commando, Predator and so on but beyond that the movie links are pretty thin. 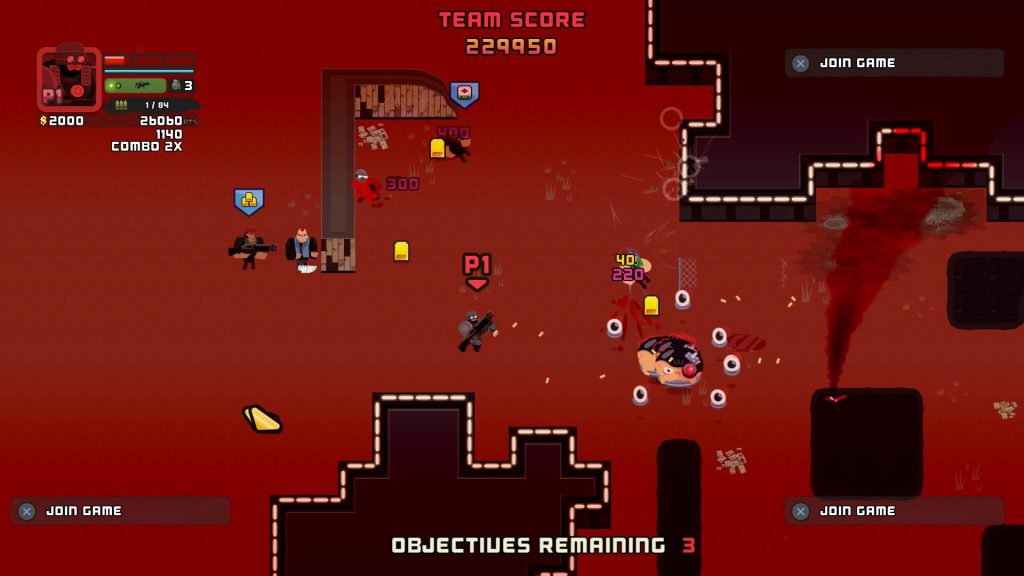 Not that any of that matters.  What matters is the gameplay and initially I straight up hated Tango Fiesta.  This is partially down to the gameplay which is pretty clunky and a little unsatisfying but also down to the arcade mode that I started with.  This mode gives you random stages to play through which is set to a difficulty curve that kicks in with a spike after the first few stages and then when you die, it’s back to square one.  Add to that some horribly limited ammunition which can literally stop your run in its tracks, it was very disappointing.

Thankfully, things do get better.  If you pick the story mode, you’ll play the stages in order and will be able to restart from the last stage you unlocked.  This is all good because it allows you to practise and get through those difficulty spikes without having to play through the early ones.  It also gives you a bit of plot (skippable if you don’t want it) and a more logical progression through the game. 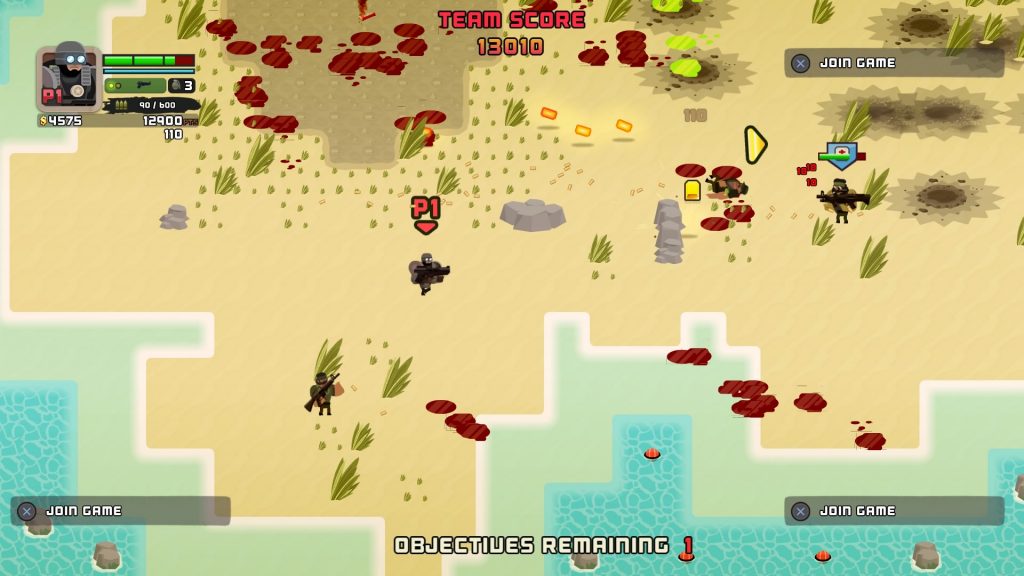 While the gameplay, as stated before, is a bit clunky and flat feeling, eventually it starts to feel a bit more natural – at least depending on your own patience and ability to adapt – and when you start unlocking better weapons, it all starts to improve.  That’s not to say that it ever gets great though but taking on the hordes with a better gun does certainly improve things.

Between the big, mostly empty stages, the uninteresting AI enemies and the bosses, none of whom are that great (although it’s quite funny seeing Bennett from Commando coming after you with a knife) the action definitely has issues but when you unlock a decent rifle or shotgun, it starts to flow a little better.  I’ve often thought that we, as gamers, enjoy games proportionately to how good we are at them and that’s maybe the case here. 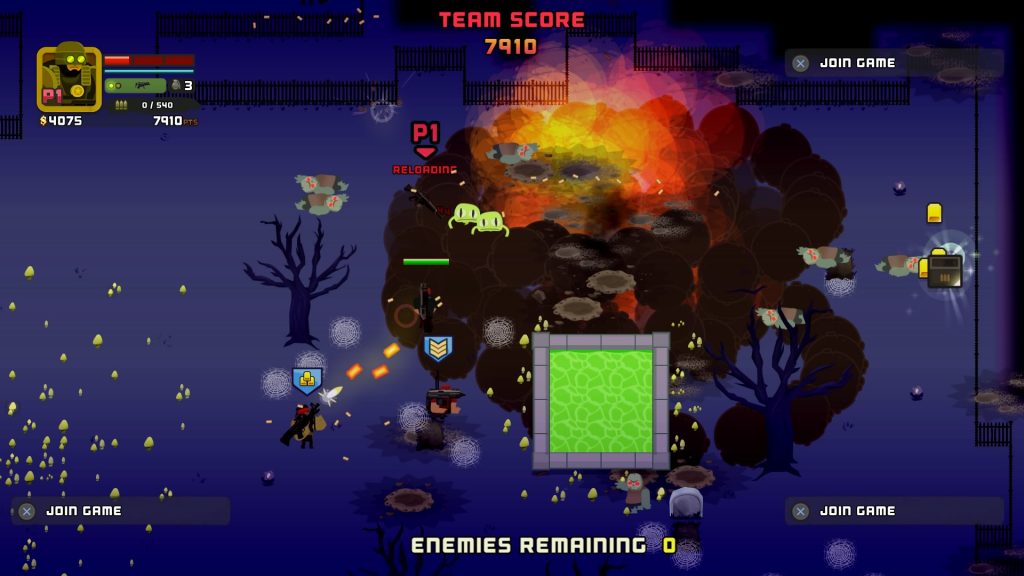 Graphically the game goes for a clean, Flash-style look.  The animation is very basic which means your character will feel like he’s sliding around a bit.  Also, there’s just a bit too much going on at times.  For example, each level gives you one or more objectives to clear.  These involve destroying buildings, hacking (or something) and also taking out helicopters.  The helicopters create black clouds of dust which obscure the action terribly.  Not to the point where it affects gameplay but it does make you wonder who tested this game.

Indeed, a lack of testing is evident as I’ve already experienced several bugs from crashes to enemies suddenly refusing to attack or bosses leaving the playable area.  It’s that kind of clumsiness in delivery that is hard to forgive when you’re already scraping around for nice things to say about the game. 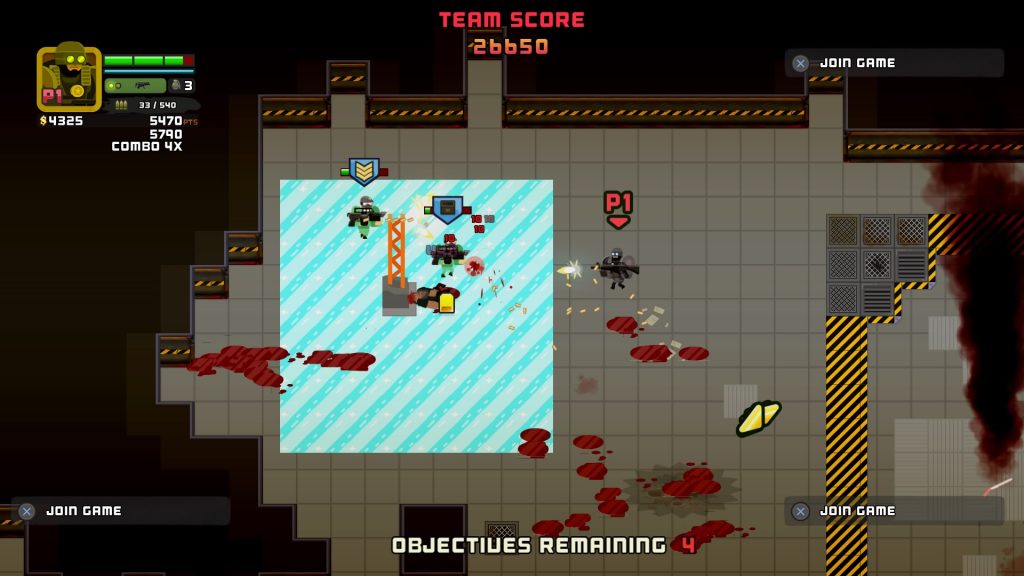 Trophy hunters are punished a bit by a daft selection of trophies that involve taking out bosses with melee attacks only.  If slowly dropping a massive health bar down by a pixel at a time sounds like fun, go for it.  I went for it though and the respective trophy didn’t unlock.  So make of that what you will.  For me it’s part of this ongoing epidemic of potentially glitched trophies that is so common right now with indie efforts on PSN.

On the plus side, the rogue stuff isn’t too complex and there’s a some fun to be had here.  In terms of tone and setting, the far superior Commando 3: Wolf of the Battlefield, a last gen shooter, would serve as inspiration for the coders and a better option for gamers (if you’ve still got your old console plugged in) but if this particular sub-set of a sub-sub-genre of arcade shooter is appealing to you, Tango Fiesta has a dash of addictiveness and a solid challenge for gamers willing to give it a chance.

Tango Fiesta
5 Overall
Pros
+ Decent weapon progression
+ Can be addictive
+ Involves a lot of action
Cons
- Movement is clunky and slow
- Most of the characters aren't worth picking
- Weak graphics
- Very unoriginal
- Technically flawed at times
Summary
The PS4 is host to so many twin-stick shooters and Tango Fiesta does very little to stand out from them. The controls and action aren't particularly slick and the graphics are very weak but the game isn't a total dud. Stick with the story mode and you may enjoy the action as your upgrades start to kick in.