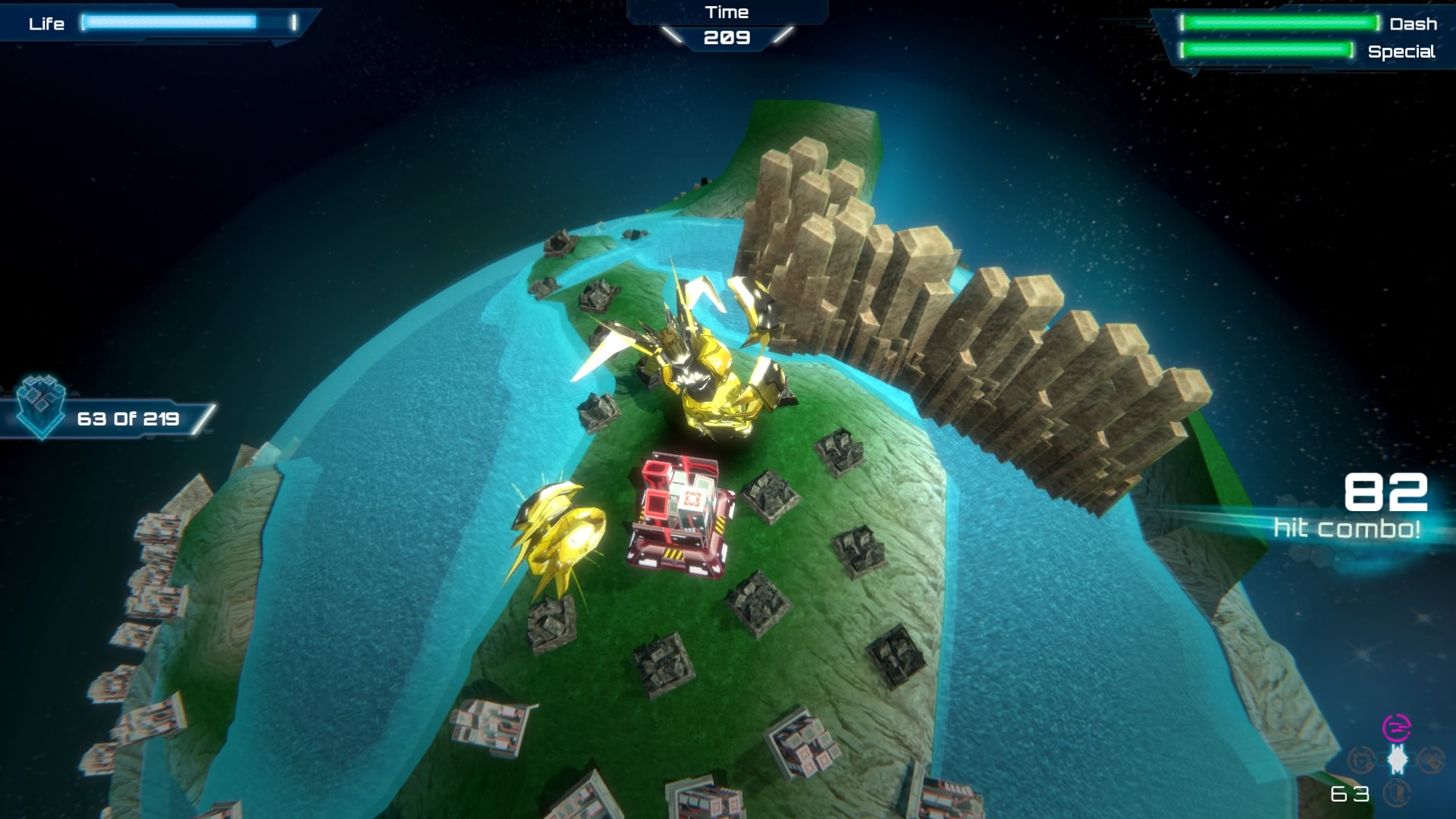 My first impressions with this game weren’t great when during the loading screen my DualShock 4 light bar was flashing violently and annoyingly.  This is a thing which could have worked if it was part of the gameplay, maybe, but when I was still in the title splash screens I actually though the DualShock 4 had broken.  The experience didn’t improve from here.

The game proper sees your control one of the titular Space Overlords as they roam across the surface of a planet, kind of like running across the surface of a ball.  You’re tasked with destroying all the buildings and turrets and have a time limit to work within.  Destroy everything on the planet and you’ll move on to the next similar looking planet.  This is the basic cycle of the game and something you’ll be doing an awful lot of, or maybe not given the poor quality of the experience. 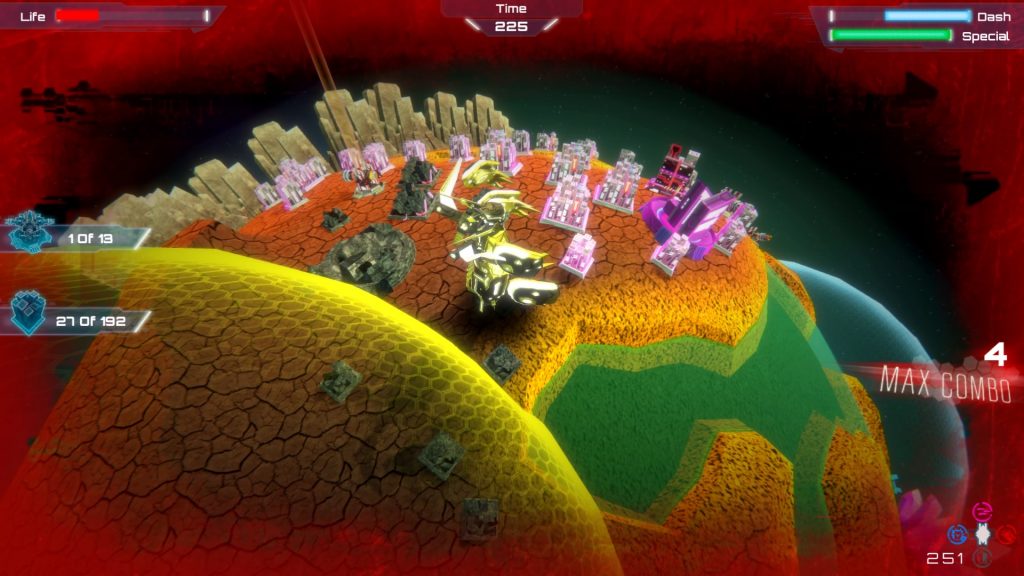 Space Overlords fails in almost every aspect at being an enjoyable experience to play.  From the actual moment to moment play through to the sub fan fiction level of story and character names.  Musically I was assaulted by some kind of poor quality synth rock which was repetitive and seemed to bear little to no connection to the action on screen.  The speaker on the DualShock 4 also got a big work out with loud metallic crashes and roars, I’ve previously been a fan of using this speaker if the sound effects serve the game, see Whispered Willows for decent use.  Here though the noise from the speaker was abrupt, incoherent and couldn’t be turned off from the options.

Before you get down to the planet you’re faced with what feels like undue loading screens, which are significantly worse on the Vita.  Once you get to the planets surface though you’re faced with a bland mess of a game.  The planets look like they have been procedurally generated as they all share that same kind of undulating nondescript landscape.  Scattered across the planet are buildings and near identical bigger buildings, turrets and near identical bigger turrets.  There is little variation in the enemy design with everything just looking a bit like a monopoly miniature.  Graphically this has an ugly aesthetic which looks even worse on the Vita. 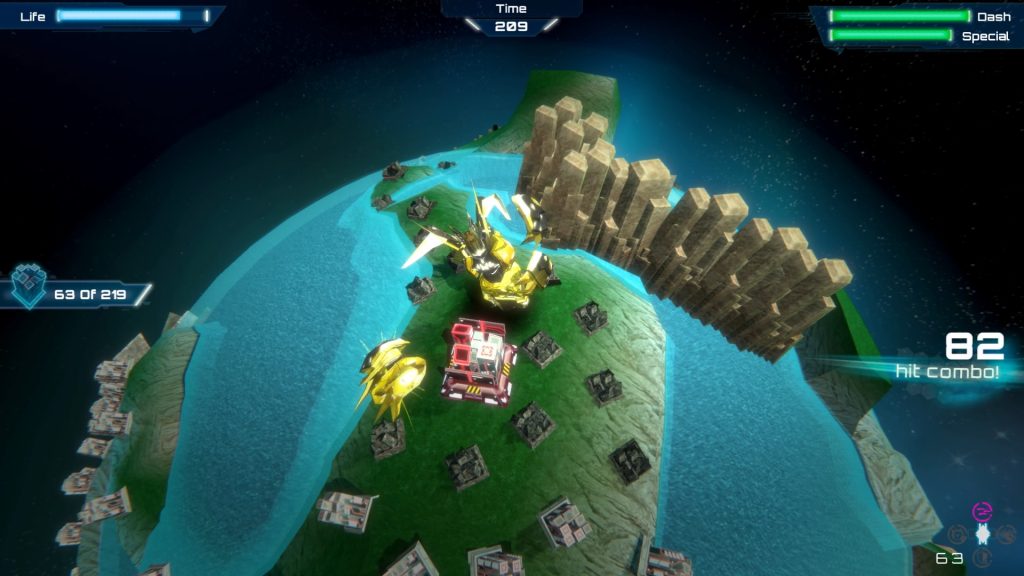 You have a couple of attacks which feel identical despite being mapped to different buttons.  The attacks seem to lack any power or any weight, a fact exacerbated by the fact some buildings take multiple hits to take down.  There is also a power up attack and dash attack which are tied to gauges which need to be filled before being used.  These power up attacks never seem to work when you want them to seemingly needing to be activated when you are precisely motionless.

Hindering your progress through each level are some terrible issues with clipping.  I was constantly encountering areas of the map when my character would get stuck on the scenery and twitch out for a few moments.  Space Overlords also applies arbitrary rules to the planets you land on frustrating progress for no apparent reason other then to annoy the player.  Some planets have giant transparent spheres floating round them, get caught on one of these and it will slowly push you along draining your health at an alarming rate.  They move at just the right speed to mean that you can’t easily detach yourself and often if you try to move you’ll end up just going over the top of the sphere getting damaged as you go.  The way you go over the top of the spheres is done in such a way that I wasn’t sure if this was intentional or not, and often when you come off the other end of a sphere you’ll be floating above the planet stuck in the air unable to do anything until the game decides to clip you back to the floor. 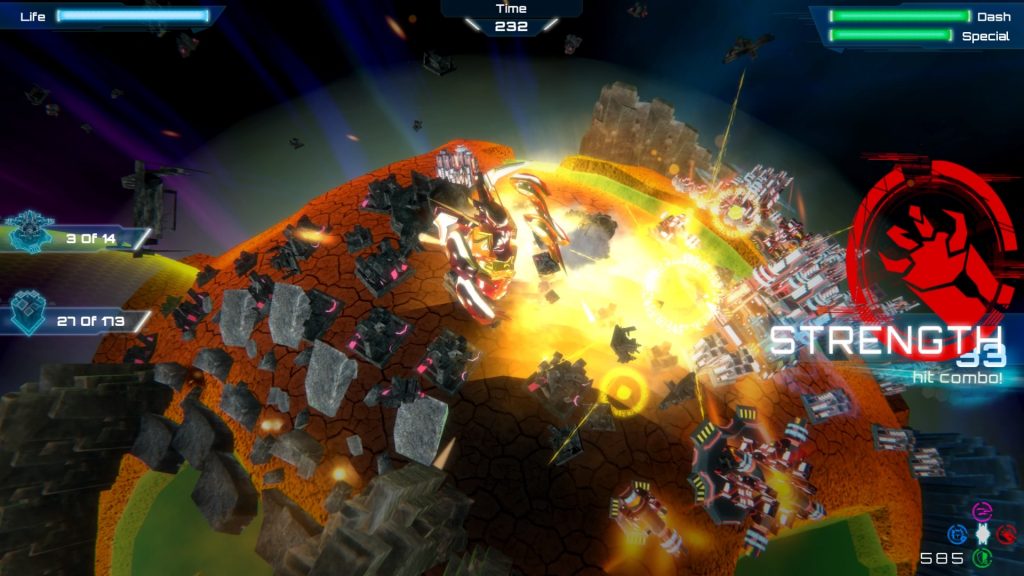 Other than the giant spheres you’ll also come across planets where the buildings can only be destroyed with special moves, or planets where the turrets are super powered.  Neither of these rule changes are fun to play with and just put odd constraints on what you can and can’t do.  On top of this there is the thoughtless way you are placed on the planets to begin your attack.  The first time I encountered a planet with lakes of fire the game started me right in the middle of such a lake and I took damage before I’d even properly moved.  Joyous.

Outside of the solo campaign there is couch multiplayer which rather than adding to the fun actually manages to reduce the fun factor.  Making a visually messy game more difficult to understand.  There is also a planet building tool where you can share your planets online, why anyone would want to subject other people to this mess of a game I’ve no idea.

Some games are so bad they are good, some games though are just bad.   Space Overlords is a litany of poor design choices, terrible story, bland levels and technical issues.  As a way to frustrate and disappoint Space Overlords succeeds, but as a enjoyable slice of videogaming Space Overlords misses the mark on every level.

Summary
A game lacking both fun and enjoyment. It's a buggy mess full of clipping issues, repetitive gameplay and ugly art design. Space Overlords is a poor game and one to avoid.