Aniquilation is a twin-stick shooter from Colombian coders R-Next that offers over thirty levels of 3D shooting action with a similar viewpoint to Nano Assault and Super Stardust Ultra in that each level is a small sphere, essentially a mini-planet.   As you traverse the level, your ship appears to stay in place as the planet rotates below you.  Both the previous games used that format to decent effect with the latter being one of our favourite shooters from the PS4 generation.  So how does this new attempt at this very unpopulated sub-genre of shooters get on?

Unusually for this type of game, there’s a bit of story here.  Some nonsense about a rogue AI that is taking over planets.  It’s presented in a clean anime style with text but we can’t say the writing held our attention for long.  You’re here for the shooting and so are we, so how is it? 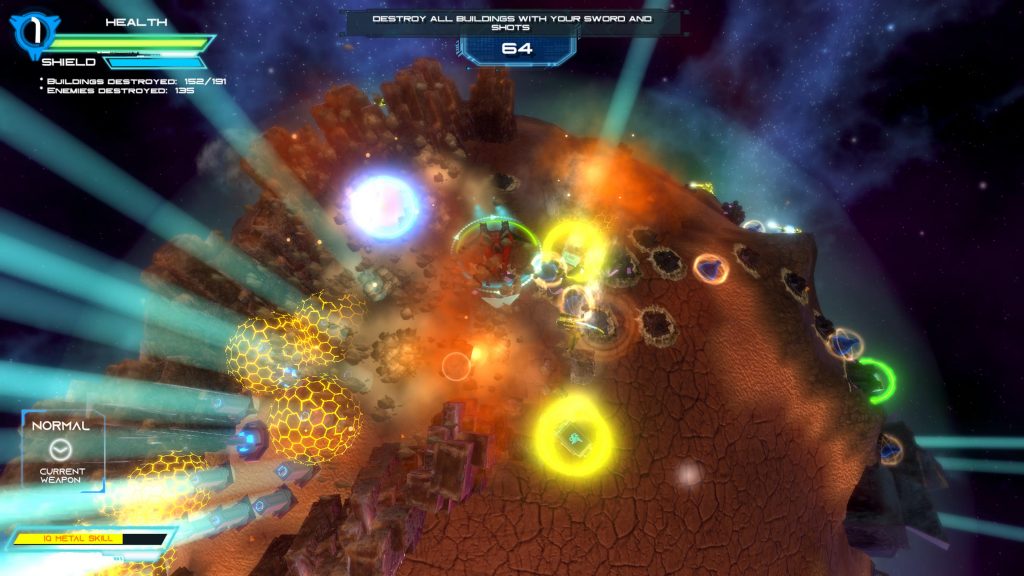 On the plus side, the game uses a standard twin-stick layout with the right analog stick handling aiming and shooting.  We’re always very pleased when twin-stickers save us the hassle of pressing, or holding, a fire button so initially we were quite happy.  However, this game adds an extra mechanic.  You have a sword attack that is used to both damage enemies and send them flying backwards, essentially turning them into another projectile.

The game’s blurb makes a big deal of this but we found it to have a couple of downsides.  Firstly, the game likes to shield enemies and structures, requiring you to use your sword to send enemies into them.  This takes away from the immediacy of the shooting action.  Secondly, it means that you’ve got to simultaneously worry about shooting LOTS of enemies while also hammering R1 to use the sword.  It’s a recipe for a repetitive strain injury if we’ve ever seen one. 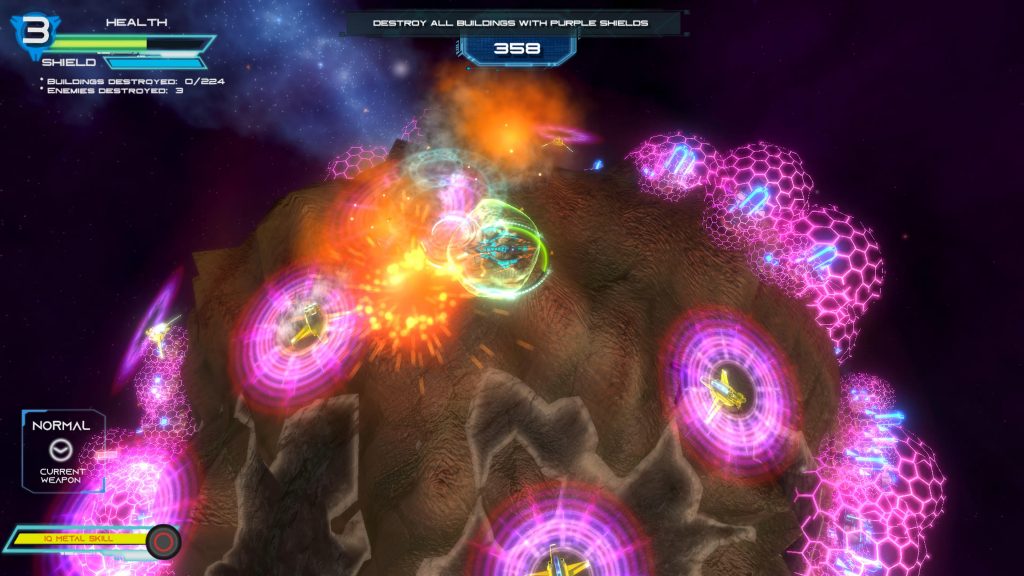 Add to that a dash move, a limited-use shield that is both important and sort of useless and character-specific special moves and you’ve really got your hands full here.  And look, that could be okay if the core gameplay was sound but Aniquilation somewhat fumbles the ball here too, mainly for technical and design reasons.

Compared to Super Stardust Ultra (the de-facto king of this limited genre), this game doesn’t stack up in any area.  The levels, as small as they are, are cluttered and difficult to read.  Your movement feels ‘off’ in that you just don’t seem to have precision controls.  That’s partly down to your ship as well as the environments which look flat but somehow you manage to get snagged on them at times too.  There’s also just an overall lack of smoothness to how it all moves.  When you look at Super Stardust Ultra, it just glides.  Everything is smooth but clear.  No matter how hectic the action and even when the video signal has to work twice as hard when played on PSVR. 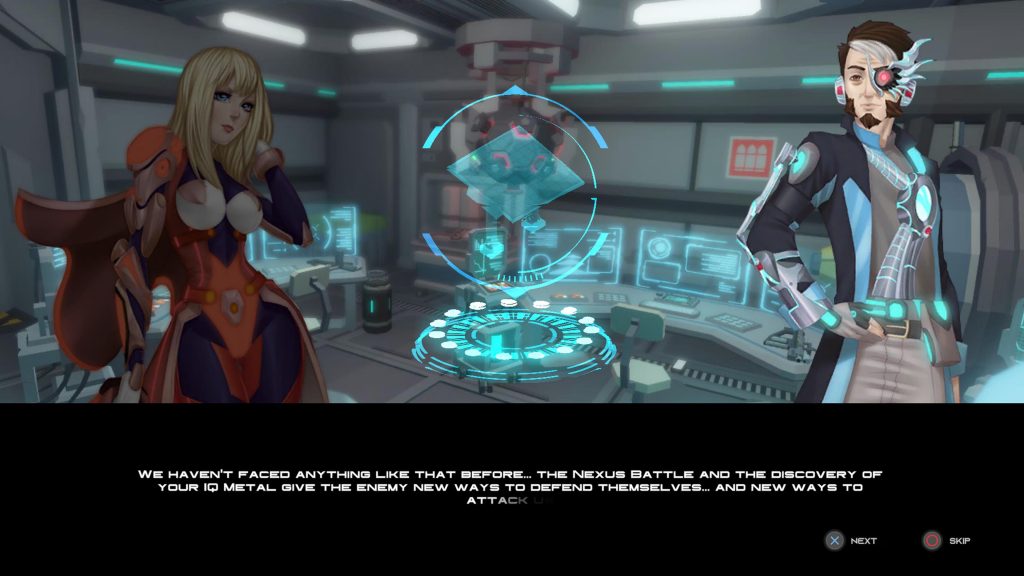 But in Aniquilation, it’s all just sluggish.  We’re not framerate nerds but we’d be surprised if this is anywhere near a consistent sixty.  Indeed, it kind of feels like we’re playing on a Switch, which isn’t great given that we’re on Sony’s newest powerhouse.  And on top of all that, the curved perspective of the gameplay area makes accurate aiming a little bit tricky too.  But then this isn’t really a game where accuracy matters as the enemy just spawns super quickly and in high numbers and you’ll be spitting out all the bullets you can to try to keep them off of you.   The game is hectic, but not in a good way.

So, all in all, the game just isn’t that impressive initially.  However, with a bit of persistence, you do start to make some progress but it’s all much of a muchness.  There are key gameplay decisions that don’t make sense such as how levels might ask you to clear out hundreds of enemy structures but then give you a tight time limit meaning that you can’t really explore safely and instead just have to charge forward while enemies constantly charge into you.  It’s like the developers forgot to ask themselves ‘but is this fun?’ 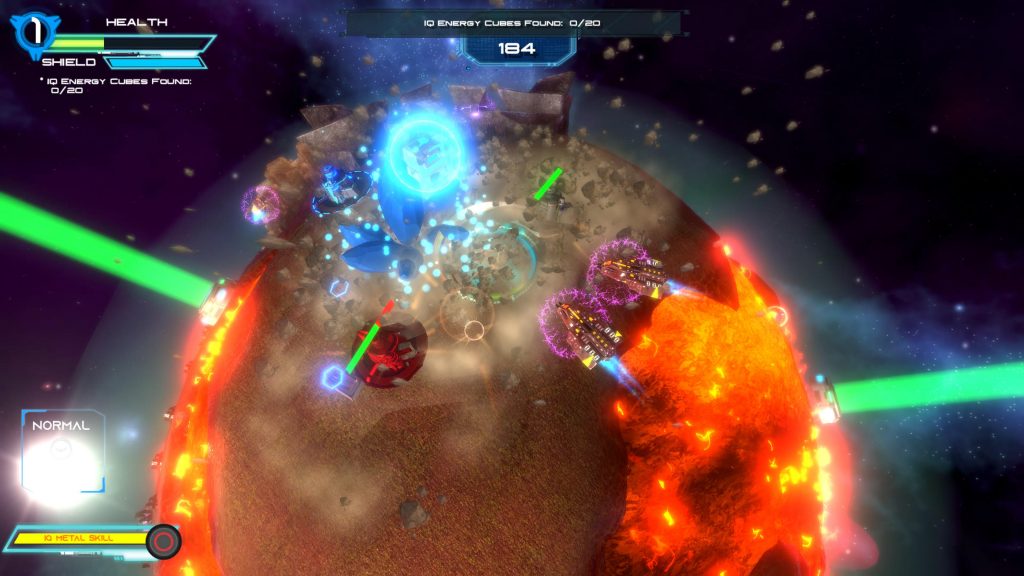 The answer would be no.  From levels that are full of lava and enemies and ask you to search for cubes or some nonsense to boss battles where the bosses don’t really care where you are and are just randomly running around shooting in all directions, the game just lacks the structure and design that the best in class twin-stickers have.  As hectic as it is, Aniquilation isn’t nearly as chaotic as something like Geometry Wars 3, yet that game never lets you down in terms of controls or visual clarity where as Aniquilation never does you any favours.

Aside from the core gameplay, there are also bonus sections where you fly into the screen collecting energy for your special weapon.  It’s a nice change of perspective but, much like the rest of the game, it’s not really any fun and we started to resent these sections when they showed up. 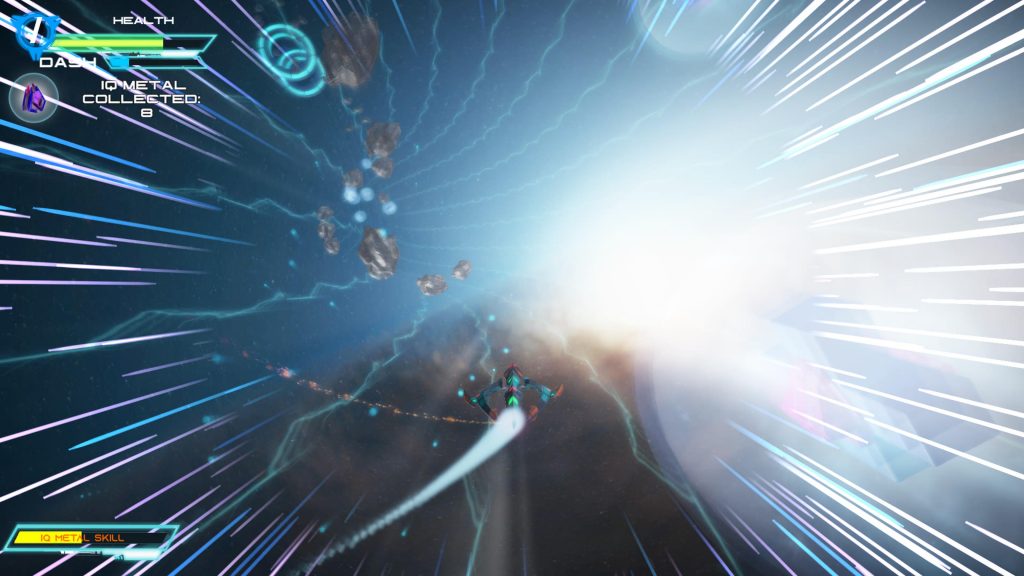 Technically it’s kind of cool that we’ve got a rotational world sort of thing going on and lots of colour on the screen and the game doesn’t crash or cause your PS5 to blow up and kill your dog or anything but it is, unfortunately, one of those games where the gameplay doesn’t meet the standards of the programming and when the programming isn’t exactly top notch, that’s a bad situation indeed.  There are a host of multiplayer modes, including co-op and PvP, but they rely on you having a) a co-op buddy and b) a co-op buddy who wants to play this game.  Good luck finding the latter.

There is some promise here though but R-Next really need to level up when it comes to getting the most out of the platforms they are programming for and they need to place more emphasis on fun when it comes to the gameplay.  They’ve clearly got some raw talent though and so hopefully their next effort will be better.