The title Soulstice probably has you thinking this is a Souls-like game but this is not the case. It is a third person hack and slash game but in the character action genre, more specifically influenced by Devil May Cry. How that information colours your interest in the game is up to you but it makes a refreshing change. 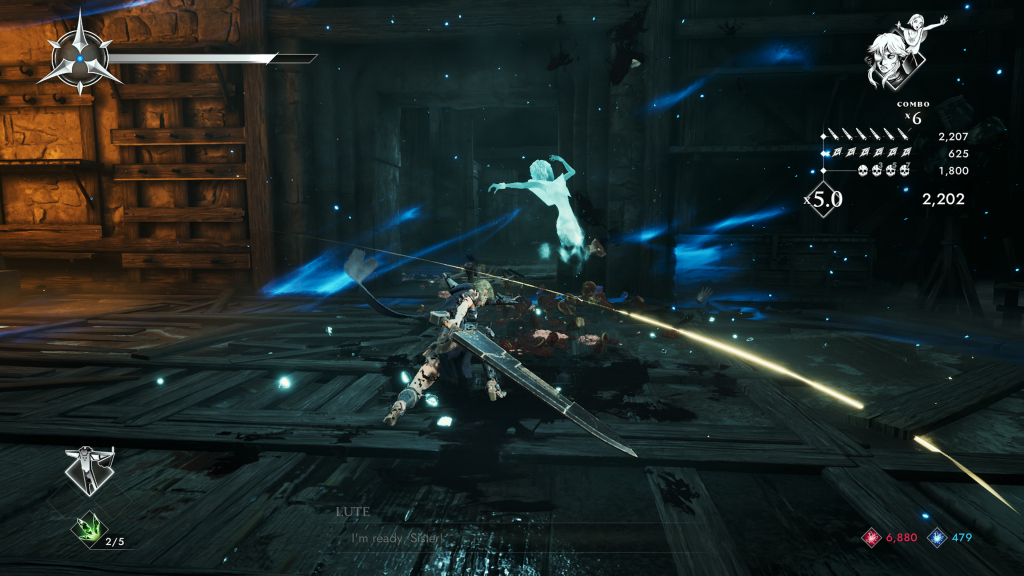 You take control of Briar, a warrior who has been sent to Ilden to seal a tear in the sky. Briar is no ordinary warrior, she is a Chimera which means the ghost of her deceased sister is with her at all times to help her fight. You’ll learn all about the nature of the Chimeras as you meet others that have also been sent and it’s an enjoyable piece of world building. The most important aspect of the game is the gameplay however, which is pretty much exclusively based around battles.

You don’t get dropped straight into the action, each level has an element of exploration to it with items to break which will net you red crystals with which to upgrade your abilities and hidden items and challenge rooms but levels are very corridor like rather than open. Before long though enemies will teleport into an area with you and you’ll have to defeat them in order to progress.

You start off with only one weapon, a large sword, but as the game progresses you’ll get more. Your sword will always be active on

whereas the new weapons you get will be on

, so are more like secondary weapons that you can change at will on the dpad. Whilst the sword is a good all round weapon each of the sub-weapons have strengths and weaknesses depending on the enemies you’re facing. 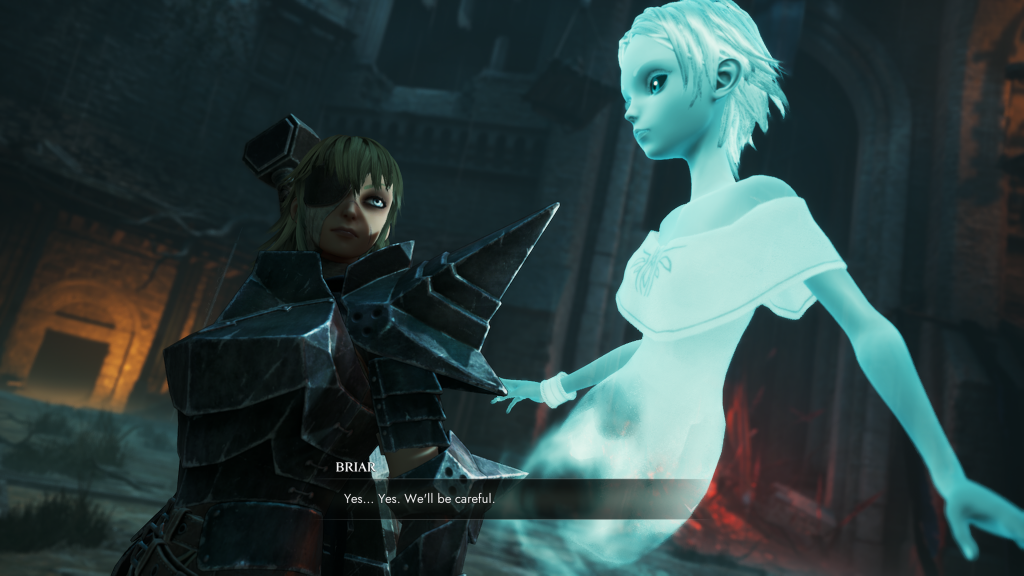 You’ll need to level up the weapons to unlock their full potential but you can chain attacks together to create combos and you’ll have launchers and dash attacks to work into your repertoire in the hope of getting through the battles unscathed. High combos and not getting hit will reward you with a powered up state and strong finishers, which might seem harsh for weaker players but will make battles flow more smoothly for skilful ones. Lute brings a whole other element to the battles however and they must all be juggled if you want to survive.

icon will appear on an attacking enemy and this will allow Lute to stop that attack. It takes some getting used to as you’ll need to be concentrating on the entire screen but you’ll be stringing together combos and hitting the

button in between to block an attack coming in before continuing your assault. Lute also has the ability to generate two fields, a blue and a red. There will be elements in the level, including enemies, that will only be interactive if you have the right field active. It’s a lot to keep on top of but these mechanics are introduced gradually so as not to overwhelm you.

There are slight puzzle elements involving the red/blue fields, with crystals blocking the way which need the right field to be destroyed or dispersed crystals all being linked to one big one but there’s nothing too tricky. Exploration off the obvious path will let you find objects that may increase your health pool or Challenge rooms that will test your fighting prowess under a time limit. The skill trees for both Briar and Lute are quite large so you’ll need to find all the extra crystals you can too. 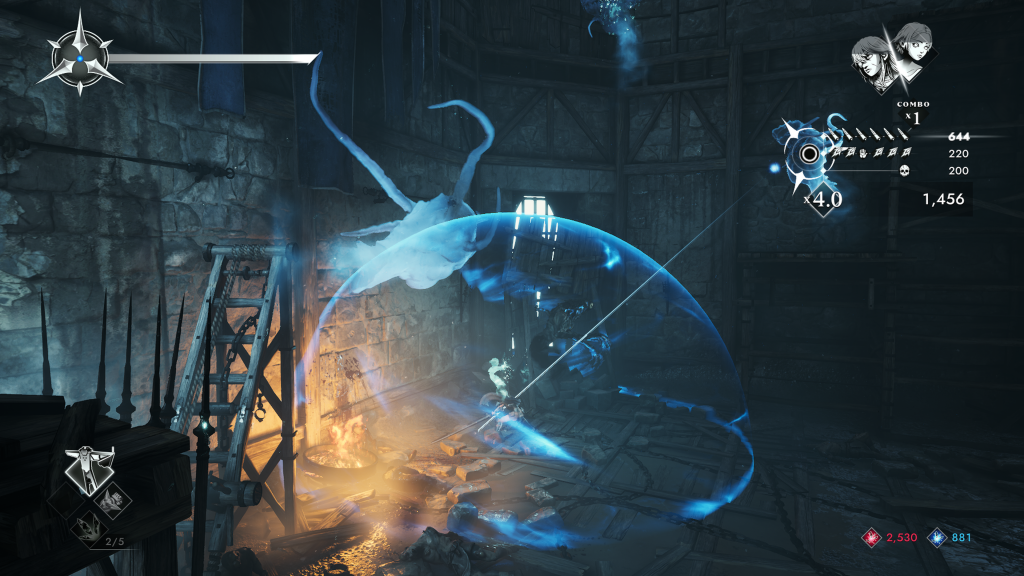 Or alternatively, as with its inspiration, there are multiple difficulties to tackle. There are three available initially but two additional ones are added as you beat them. I have done it in the past in other character action games but, for the time being at least, I don’t think I have the energy to run through Soulstice again. There are 25 levels altogether which isn’t an issue in itself but my completion time for each level varied between ten and forty minutes. That’s quite a wide margin so I’d often think, “I’ll do one more level” and end up playing one of the longer levels.

It’s an issue of pace. The game does introduce new mechanics whilst exploring and new enemies pop up throughout but it does start to drag around the middle section. It doesn’t help that a lot of the game looks the same. It’s a nice looking game in general with some cool looking boss designs but the environments barely change throughout making the game feel less varied as a result.

Things aren’t perfect in combat either. The main issue is the camera. As you explore the camera is locked in position, pointing you in the direction you need to go to progress. Once in battle it becomes free and if you lock onto an enemy then it will remain focused on them. Unfortunately it doesn’t really frame the action in a helpful way. If there are few enemies you’re probably okay but as the game progresses more and more enemies will join fights and the camera struggles to give you all the information you need. 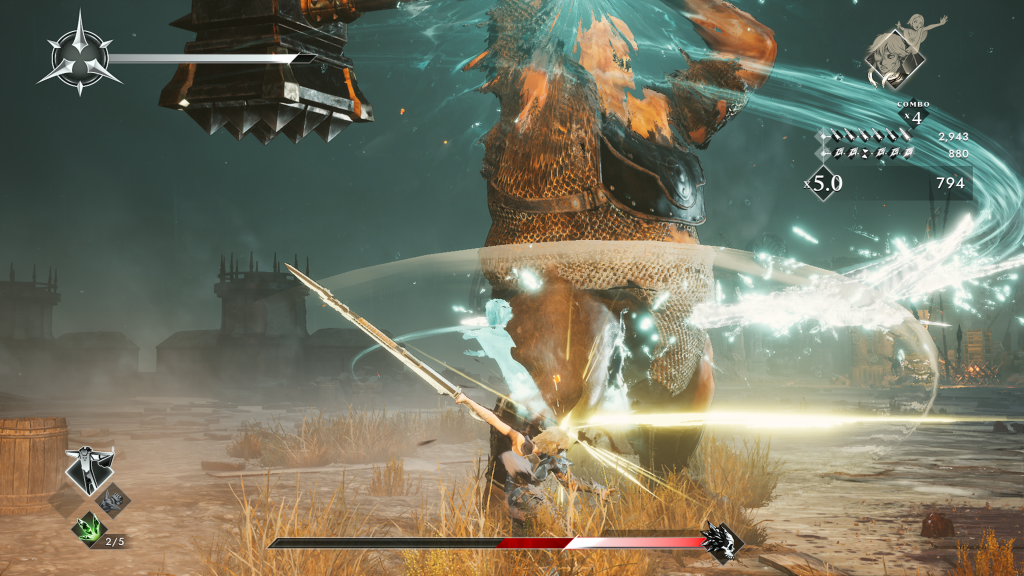 There is one large enemy in particular that the camera just gets stuck behind constantly, giving you a view of nothing but a close up of the enemy’s back which actually ended in my first death of the run as I literally couldn’t see anything. Enemies have no issue attacking you from off screen either, combined with what can be a mess of effects you can often just get hit without much warning. This also occurs with the Lute mechanic where you can press

to block an enemy attack. You become so reliant on it that when it doesn’t appear, for whatever reason, it can leave you in a spot of bother.

I’m sure there will be players out there that will master the mechanics and gameplay but that will be in spite of these issues, they’ll find methods to manage them or workarounds. It sours an experience that otherwise gets a lot of the fundamentals right. When the combat flows it feels great with a lot of options to utilise and it rewards clean play. It’s just the pacing issues and an awkward camera that stop this from mixing with the big boys.

Soulstice gets a lot right. The combat mechanics are fun, fluid, have a huge amount of depth to them and a high skill ceiling. Lute’s skills add to the combat and exploration as well as giving Briar someone to talk to. Less lengthy levels, with a focus on replaying them at higher difficulties, would have been more appealing to me as after one playthrough I feel burned out. A combat camera which gave the player all the information they need and enemy AI that were less likely to take advantage of those deficiencies would also elevate the experience massively. 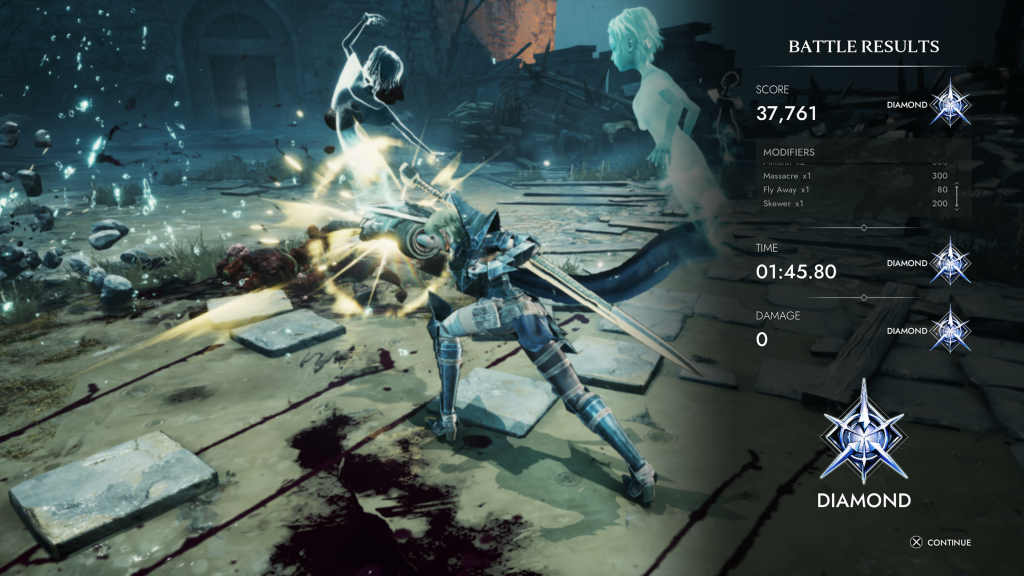 As it is though Soulstice is still a game worth checking out for fans of character action titles. It gets a lot closer to the big franchises than you’d think and the ending leaves things open for a sequel which will hopefully be more Devil May Cry 3 then Devil May Cry 2.

Soulstice
7 Overall
Pros
+ Combat is fun, fluid and deep
+ Some great visuals and designs
+ Lots of skills to unlock on two separate trees
+ Plenty of levels and difficulties to attempt
Cons
- Has pacing issues with the middle portion dragging
- Combat camera can be a real hindrance
- Environments need much more variety
Summary
Soulstice has some pacing issues and a dodgy camera but the combat is smooth, challenging and requires skill to master. A few tweaks would make this a fantastic game but even as it is fans of the character action games should definitely give it a chance.