XIII is a first-person spy shooter which has had something of an interesting history that we really have to talk about before we get into the merits of the game itself.  Based on the Belgian comic of the same name, XIII was originally released in 2003.  We played, finished and liked the Windows version but it also came out for PS2, Gamecube and Xbox.   With it’s cel-shaded, comic-like presentation and reliance on pretty much every spy-thriller trope you can imagine (right down to the fact that you start with amnesia, a plot point that would later be borrowed to great effect by the Bourne films), the game developed a decent cult following despite getting some mixed reviews.  It didn’t exactly set the charts alight though.

So it was a little bit of a surprise when publisher Microids announced that the game was getting a remake back in 2019.  However, with the original source code lost, the remake was somewhat doomed and when it arrived with a dreadful new art style, awful screen-tearing, out of sync or missing sound effects, a missing online mode and various technical faults.  It was so bad that Microids apologised profusely, sacked developers PlayMagic and hired Tower Five to fix everything. 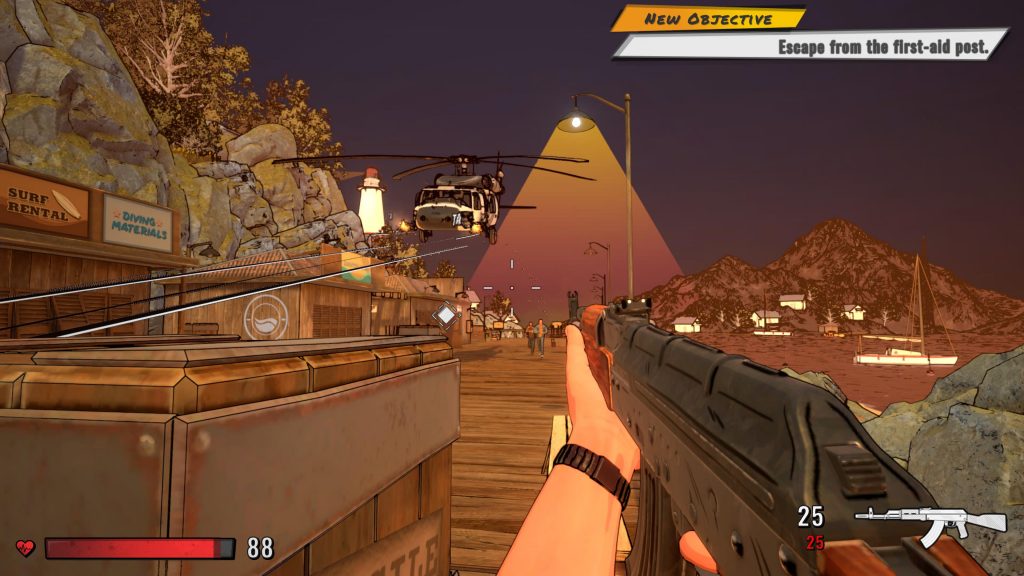 The good news here is that the remake of the remake is now complete and being offered as a free upgrade for existing owners and, for the most part, the game is much more akin to the 2003 original (although the level design, plot and enemy placements are exactly as they were as this is more of a remaster than a remake).  As such, you play as the titular Agent XIII, voiced by a sleepy-sounding David Duchovny, who wakes up on a beach with no memory of who he is or how he got there.

Throughout the game’s 13 chapters, you will uncover a conspiracy full of twists and turns and for the most part it’s all pretty entertaining.  We love a good spy thriller and as we said before, this hits all the usual Bond-esque notes and has plenty of set-pieces (even if sometimes there are opportunities for more of them).  You’ll get a good few days’ worth of entertainment from it and, thankfully, it all moves at a good pace and doesn’t overstay its welcome too far, even if you might get a bit bored of shooting the same enemy agent archetypes over and over. 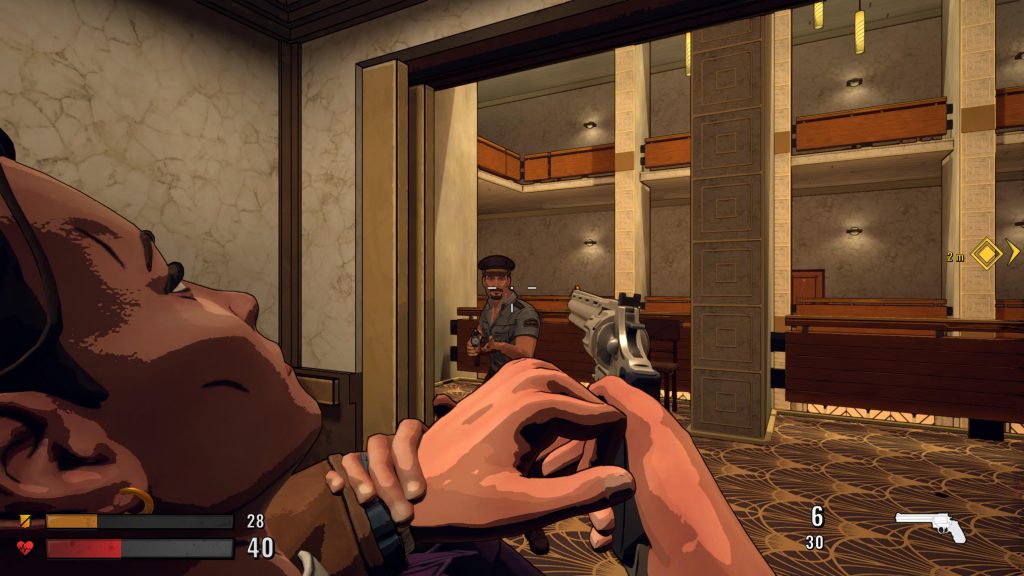 This is very much as ’00s shooter.  It’s delightfully linear and it equips you with the usual array of pistols, sniper rifles, throwing knives, rocket launchers and pretty much anything else that John Matrix might have on his shopping list.  There was quite a lot of criticism of the guns two years ago but that’s been tightened up a bit now and we rather enjoyed using them, especially the stealthy crossbow which was our go-to weapon whenever we had ammo for it.

That said, the general stealth gameplay is still not quite there.  You’ve got plenty of options to kill on the quiet but for the most part you have to crawl towards enemies in order to not alert them, and if they’re patrolling an area you won’t outpace them and the prompt for the stealth attacks doesn’t show up easily.  So we ended up running and gunning it a bit most of the time.  On the default difficulty you’re a bit of a tank and can eat quite a lot of bullets before you die, so you might want to bump it up if you want any kind of real challenge. 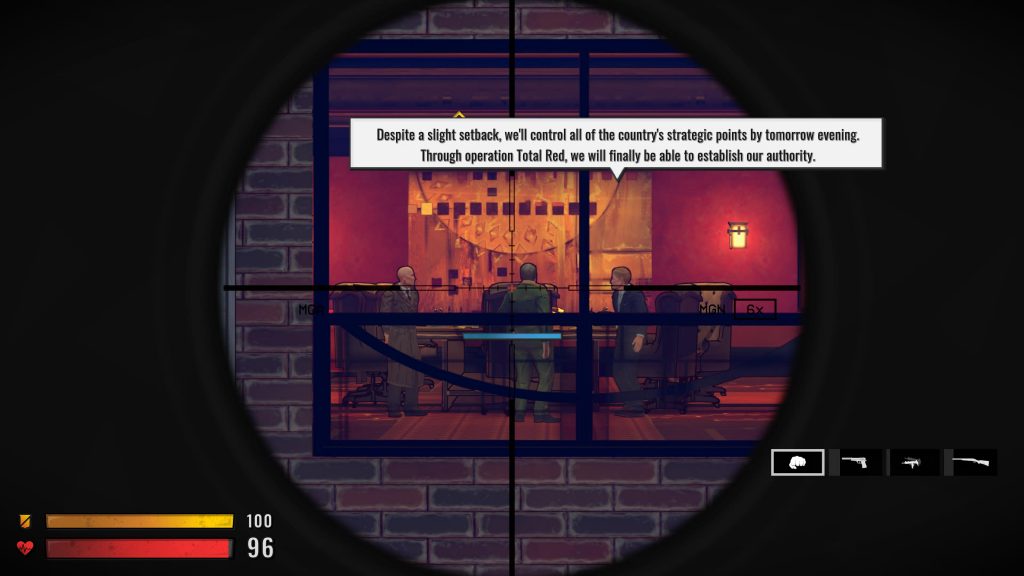 Indeed, the only real difficulty came when certain objectives just weren’t very well signposted.  We managed to beat the game without resorting to a walkthrough but there were times where we were convinced things had bugged out until we figured out what to do next.  There’s a bit with a guard at a vending machine and no matter what we did after knocking him out and hiding him in the toilets, an alarm would go off.  In the end we just ran for the exit and that was enough to finally beat the chapter, even though all stealthy approaches failed.  These moments are pretty rare though and we were able to enjoy the entirety of XIII without too much frustration.

Having finished it almost two decades after previously doing it, we can recommend XIII but probably only to older gamers.  Young ‘uns will be thinking ‘WTF is this?’ with its lack of open-world exploration, vehicles and gadgets but, for us at least, there’s still a place for linear shooters like this that just tell a story and let you get through without needing a map. 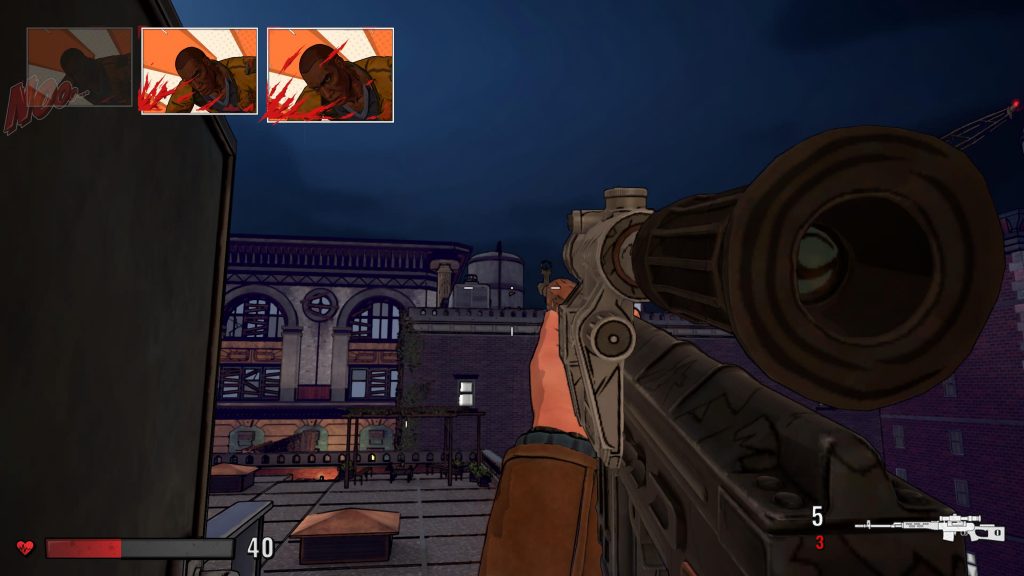 Visually, the game still looks pretty cool.  Cel-shading isn’t quite as unique as it was back in 2003 but XIII still feels different.  The comic-book text was always used to great effect (you can see where enemies are from the written ‘tap’ prompts as they walk) and your best long range headshots are rewarded with in-screen panels that show the enemy dying like peasants.   The audio is a bit of a mixed bag though.  Duchovny’s voice acting is still as bad as it ever was but we enjoyed hearing the late, great Adam West as General Carrington.  Also, the game has its original bonkers jazz soundtrack which is often sensational and adds real energy to the action.

XIII was never a ten out of ten game and is a harder proposition to recommend twenty years later but we’ve enjoyed revisiting it and we’re pleased that Microids stayed true to their word and fixed things.  The new online mode seems to be dead on arrival though and we weren’t able to get a game going but, for us, XIII was always a single player joint and we’re still fans of it.  Your mileage may vary depending on whether or not you can name a Bond before Daniel Craig but XIII‘s redemption is complete and we’re pretty chuffed with it.

XIII Remake
7 Overall
Pros
+ Much improved since the 2020 release
+ Classic linear FPS gameplay
+ Interesting plot
+ Has some good weapons
+ Comic-style visuals work well
+ Sensational music
Cons
- Gameplay is understandably a bit dated
- Still lacks a bit of polish
- Online mode seems dead on arrival
Summary
XIII was fun in 2003 and terrible in 2020 but Microids have delivered on their promise to fix the remake. It might not be one for modern gamers but who cares? We've rather enjoyed playing through XIII's various spy thriller tropes.