Akane is a top-down assassinate ’em up from Brazil coders Ludic Studio.  It actually came out for Windows back in 2018 and had a Switch release a year later but now it’s here on PSN and ready to break some skulls.

You play as the titular heroine who begins the game explaining that she’s going to kill everyone and then, armed with a katana and a gun, you take over as she carves her way through the nameless minions that make up this arena-based title. 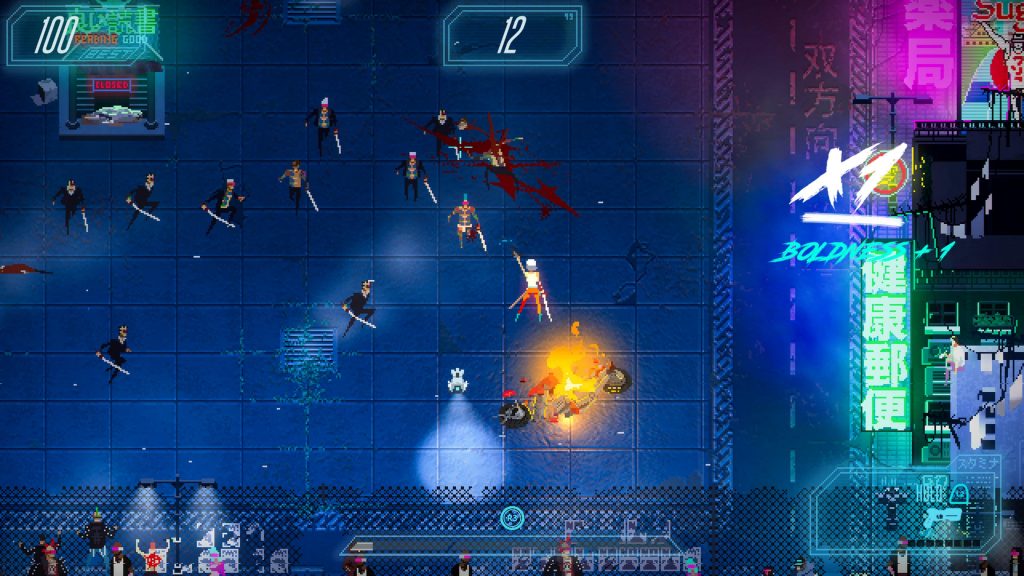 Most of the characters in this game, yourself included, are deadly but fragile.  One hit is enough to kill them and you, so you’ll need to be careful because what the enemy lacks in smarts, they make up for in numbers.  As soon as the game starts, they come charging at you ready to be put down by either your sword or your gun.  Given the styling of the game though, you’ll likely do your best work with the sword.

As your run and dash your way around, your sword is used to kill people in quick succession.  However, there is a stamina system tied to it and after half a dozen or so enemies, you’ll need to take a little break from slicing up people.   Likewise, your gun can take out enemies at range but is limited in ammo.  New ammo generates in the gun but very slowly, killing enemies with your sword speeds this up marginally. 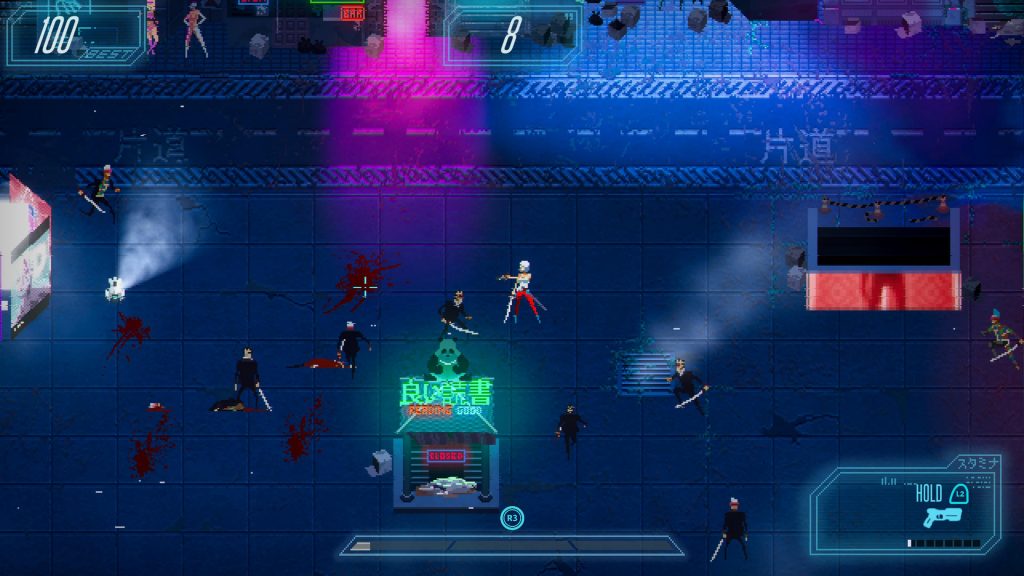 What you end up with is two competing systems.  One is stamina and one is ammo but they both need to be managed in similar ways.  With death always just a second or two away, you have to be very aware of your capacity to deal out death because if you miscalculate, you’ll go to swing your sword and will instead die a peasant’s death.  And this happens A LOT.

Indeed, it’s the main way you’ll die in a game where you die ALL THE TIME.  The other ways you’ll die are from these guys who show up and shoot you.  You can dodge or even deflect their bullets but that’s harder to do when you’ve got a screen full of angry yakuza trying to liberate your guts from your torso.   It all sets up this one true condition:  you’re never safe. 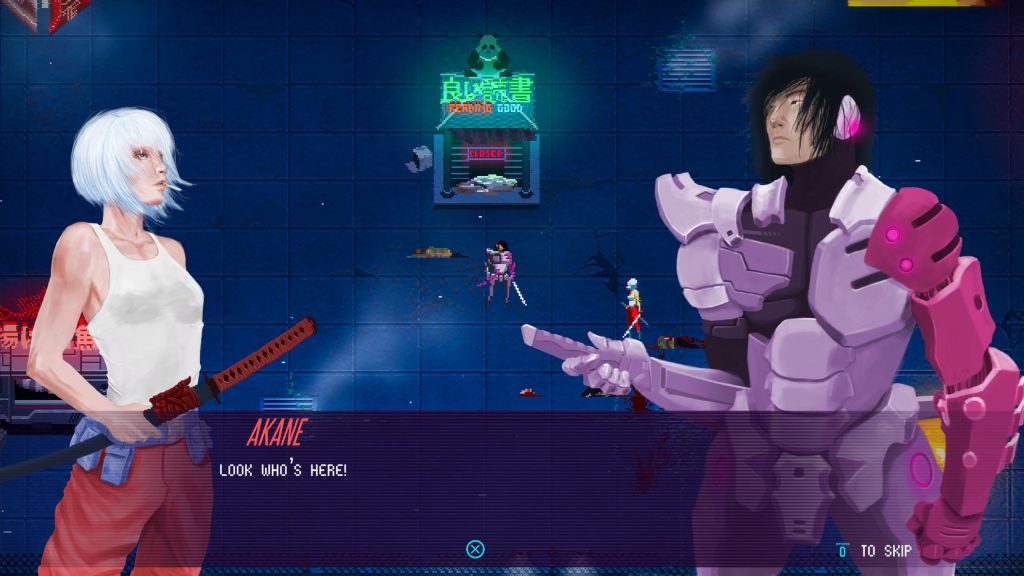 Now there is something of an upgrade system which might make you think that you can brute force your way to success but you’d be very wrong.  You’re never rewarded for failure here.  The only way you can get your hands on new gear is by completing in-game achievements.  You start with five of these, each one linked to a new bit of kit.  It might be to get a combo of 50, get your ‘boldness’ up to 100, shoot 50 enemies or kill a load of them without missing.  Whatever it is, you’ll get something for doing it.

The good news is that each of these comes with a trophy.  The bad news is that most of these little sub-missions are really bloody hard.  The worse news is that the new gear you’ll get isn’t necessarily an upgrade. 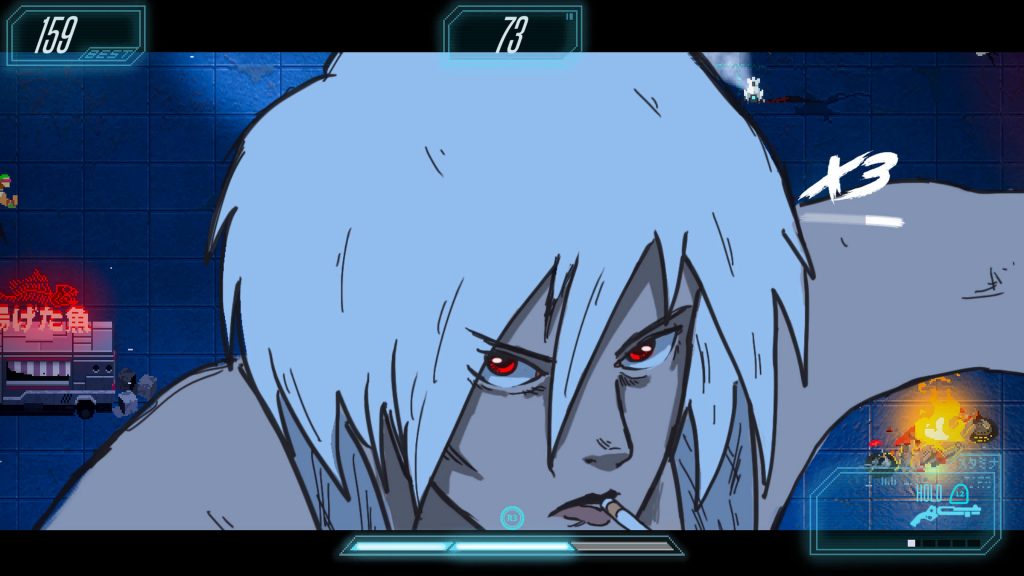 For example your first sword has a stamina boost of 20%.  Stamina matters.  The next sword loses that boost but gives you a charged spin attack.  Some people rate that but for us at least, standing still generally means death.  Your first gun is a functional enough pistol.  Your next is a shotgun with very limited ammo.  It’s okay but it won’t massively help your chances of staying alive.  Another weird quirk is that the boss (who shows up when you’ve killed 100 people) gets stronger every time you beat him.  Making an already awkward encounter even harder later one.

Akane is a game that revels in its own difficulty.  It is as user-friendly as an ’80s coin op game and there is a purity in that.  It’s not that this game is impossible, it’s just that it’s always  ready to  defeat you and sometimes so quickly that you’re not sure what you could have done to improve your chances.  However, we’re pretty sure that it’d be a lot more enjoyable if they just calmed that stuff down a bit or if they made new weapons and gear just a bit more effective. 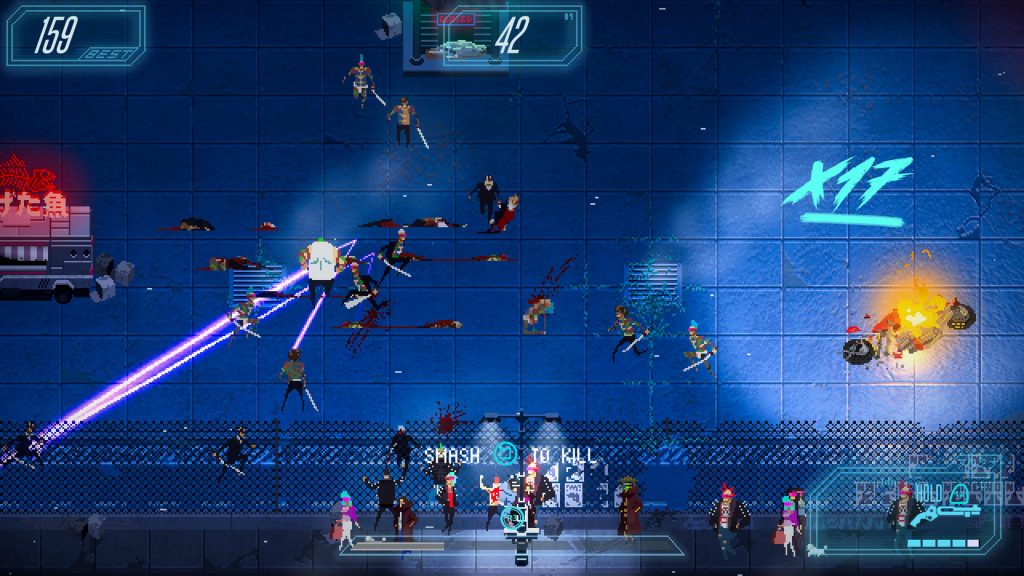 Where the game scores well is in its presentation.  The music is the standout feature with its awesome and hard-hitting soundtrack full of cyberpunky synth charm.  The visuals opt for a simple pixelated look but the Akira-esque Japanese neon aesthetic is certainly pretty stylish.  Oddly though, you only get the one arena to play in.  Essentially meaning that after a few seconds you’ve really seen everything the game’s ever going to show you aside from the boss battle and even these are repeated after every 100 kills.  There’s no real variation on offer at all.

With no promise of gameplay or visual variety and an upgrade system that doesn’t really upgrade anything, Akane ended up reminding us of those old Nintendo Game and Watch games where you just did the same thing until the score hit 999 and you ‘clocked’ it.  But if you fancy some hard-hitting and even harder-playing arcade style action, Akane does offer a brutal and minimalistic bit of fun.

Akane
6 Overall
Pros
+ Great music
+ Stylish setting
+ Can be addictive at first
Cons
- Lacks any variation
- Upgrades offer very little
- Only one arena and boss type
Summary
Akane is one tough little hack and slasher where death comes easily to everyone involved. However, it's so badly lacking in variation that ultimately we can't see most players sticking with it for long.