Slipstream is a racing game from Brazilian-based coder Sandro Luis de Paula, otherwise known as Ansdor.  Set somewhere in the 1990s, this arcade-style driving game is a love letter to the Out Run games, ’80s neon visuals, ’90s arcades and synth music and it certainly turned heads when it was released on PC back in 2018.

The Out Run influence is what’s front and centre here.  You control a car through five branching stages, just as you did in Sega’s seminal arcade classic, with each stage ending in a choice where left is the easier option and right is the harder one.  With each stage offering this choice, that gives you 25 potential stages to race through and each has a unique look from ocean views, cityscapes, industrial landscapes and more. 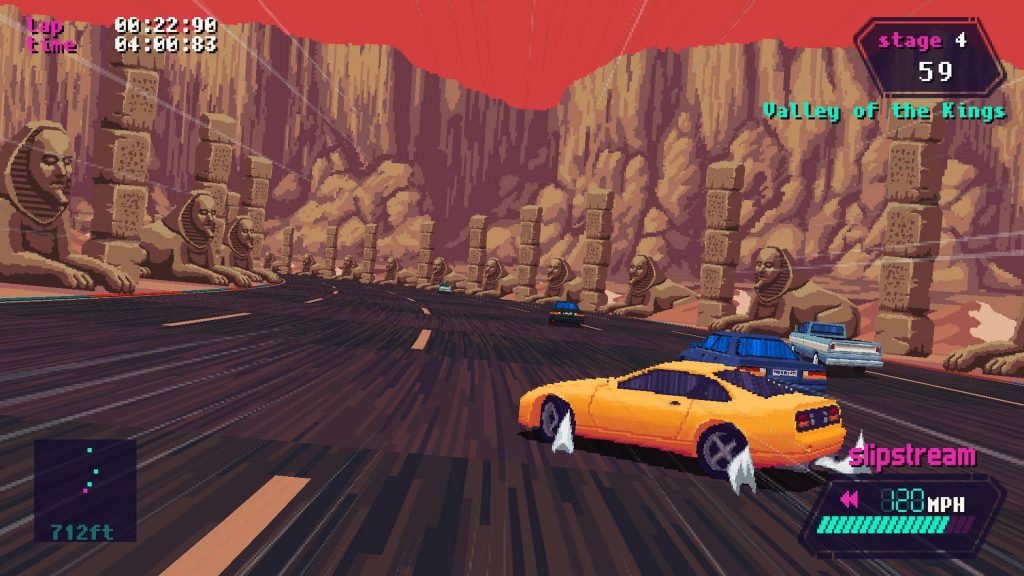 However, the gameplay also borrows from Out Run 2, by wisely stealing that game’s excellent drift mechanic.  So when you hit a turn, you tap the brake, hit the accelerator and slide into the turn at full speed, sliding sideways like you’re Japanese or something.  It works nicely although some frustration is caused by the fact that it’s quite tricky to see when the turn is ending, meaning that you’ll crash on the inside edge as the road straightens out.  At least during your first few attempts.

Slipstream mitigates this with a five-second rewind option (complete with a nice VHS rewinding effect) but you can’t help thinking that they did that rather than find a better way to display the turns.  Anyway, it’s not a big deal as you’ll eventually get used to it and will start making less errors.

The final gameplay wrinkle is the titular slipstream mechanic which encourages you to line yourself up behind an other car for long enough to induce a slipstream which gives you a nice speed boost.  It’s a smart system but we did find it caused more issues for us as we kept crashing into cars or going into turns a little too quickly.  But again, you get better at using it the more you play. 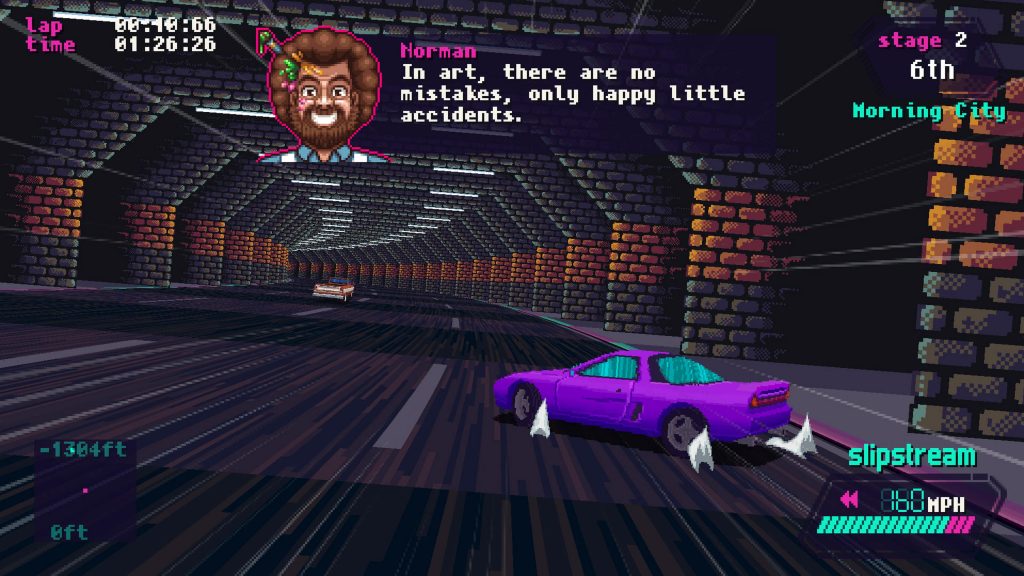 Thankfully, Slipstream is quite generous in terms of balancing the difficulty.  When you first play it, it’s a little brutal.  Your rivals speed off into the distance and appear to drive perfectly as you fall further and further behind and calamity can come on any corner as you get used to the drifting and the game’s unusual graphic style but you can drop the difficulty and there are five different cars meaning that you can get the right mix of top speed, acceleration and handling.  That said, a couple of the cars seem a little useless but the middle three are certainly more balanced.

Eventually it does click but we found that we had the most fun when we set the drifting to auto, dropped the engine power (which is the difficulty setting) to ‘low’ and just had a lovely, drifty time listening to the music and checking out the views.  But equally if you push the difficulty up, you’ll get an authentically tricky arcade game that feels pretty much in line with the challenge of any late ’80s, early ’90s racer. 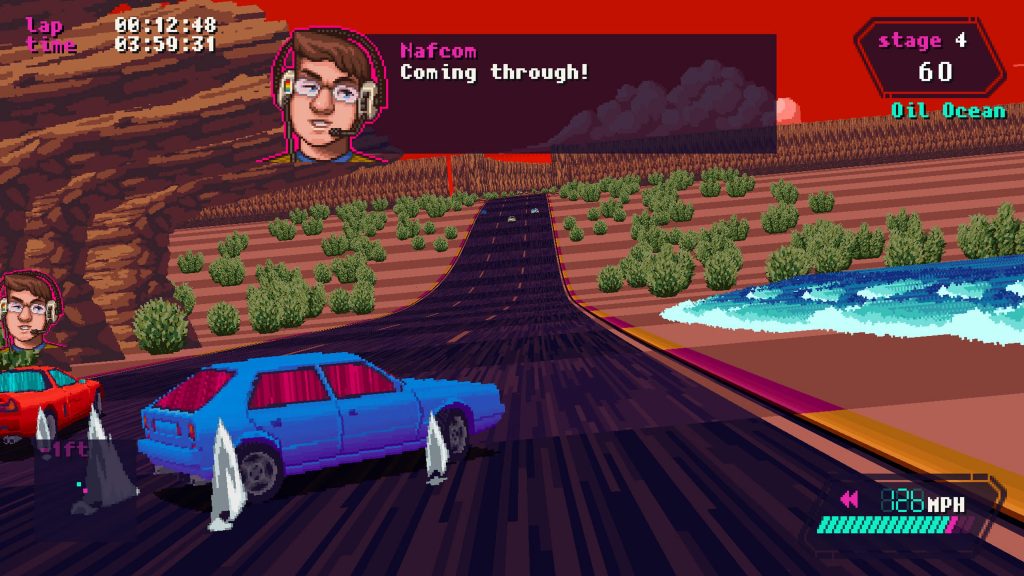 With just 25 potential stages, there’s not a whole lot to Slipstream but in an effort to fill out the package, there are quite a few modes.  The Grand Tour is your standard five stage race while ‘Cannonball’ gives you a linear race through stages that you select in advance, ‘Grand Prix’ adds a tournament set-up (and car customisation) and ‘Battle Royale’ is an elimination mode where up to 16 cars race through 15 stages in an effort to not be eliminated for being last at the end of a stage.  Add to that 2-4 player offline multiplayer and that’s a decent amount of game.

Of course, the real draw here is that vivid presentation.  Visually, it’s as if they’ve taken the repeating side of track objects and blue sky backgrounds from Out Run but made it all a lot smoother.  It feels familiar and distinctly retro but also updated and impressively slick.  The backdrops are all nicely distinct and it’s genuinely a pleasure to see them all.  There’s also a soundtrack of nice synth music (you kids will call it Synthwave or whatever).  It’s no ‘Magical Sound Shower’ but it’s all quite decent.

Slipstream
7 Overall
Pros
+ Great neo-retro visuals
+ Drifting mechanic works well
+ Good range of difficulty modifiers
+ Extra game modes are welcome
Cons
- A bit repetitive
- Higher difficulty setting can be a bit harsh
- Judging the exit of turns is trickier than it should be
Summary
Slipstream is a beautiful tribute to the classic arcade racing genre. It looks great and plays well. So if you're a fan of this sort of thing, you can't go wrong.

One thought on “Slipstream – PS5 Review”