Z-Warp is the latest shoot ’em up from Panda Indie Studio, the one-man shoot ’em up specialist behind most of Eastasiasoft’s impressive array of shooters.  As ever, this is a vertically-scrolling, arcade style bullet-hell game and it has plenty of Panda Indie’s trademark characteristics.  So, if you want to know what they are, let’s dive in!

If you’re familiar with this particular coder, you might remember such games as Null Drifter, Red Death and the two Project Starship games.  All four were classic shoot ’em ups that had utterly insane visuals, decent music and a really interesting difficulty curve.  That’s very much the case here too. 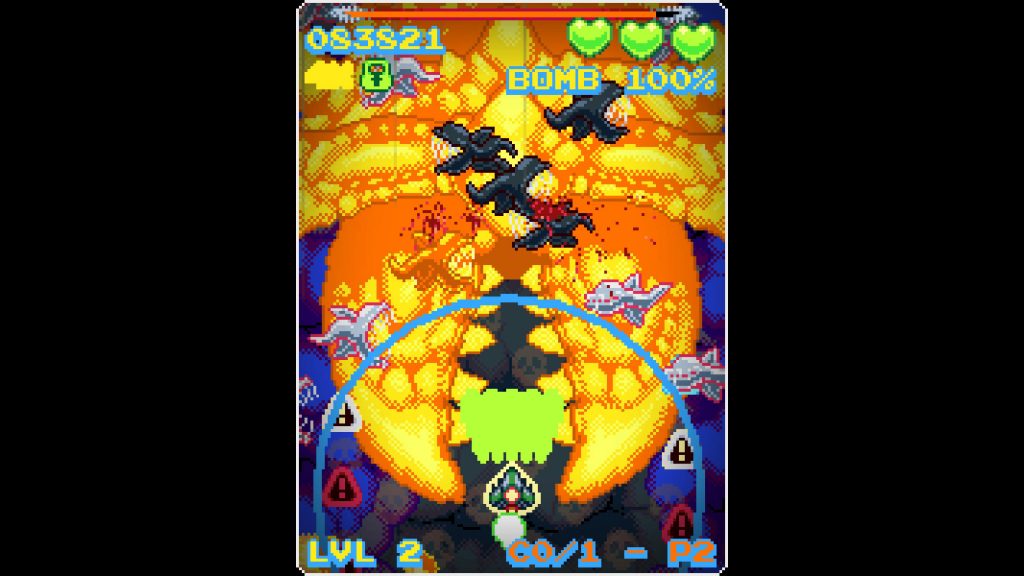 You play as the classic lone spaceship flying ever upwards as enemies descend on to the screen and attempt to wipe you out with floods of bullets.  Death can come from being shot, being crashed into or by you crashing into some bit of scenery.  It’s standard stuff for this type of game.  You move with the d-pad/left-stick and shoot with

.  In true Cave style, if you tap it you’ll get a nice spread shot and if you hold it, your firepower will coalesce into a powerful laser beam (but your ship will move slowly to compensate).  If you want the spread shot without the thumb cramps, just hold

As with Void Gore you also get a bomb mechanic that clears out bullets in a circle around you.  This has unlimited uses but has a short cool down time and the circle grows for a few seconds too, so if you want the maximum impact you do need to leave it for a short time but you can use it, to limited effect, as the circle is growing.

If you read the in-game instructions, that’s basically all it tells you apart from a little bit of stuff about the scoring mechanics (there’s a combo multiplier if you’re chasing scores and online leaderboards too) and the important tip that you can fly over bosses.  That becomes important later. 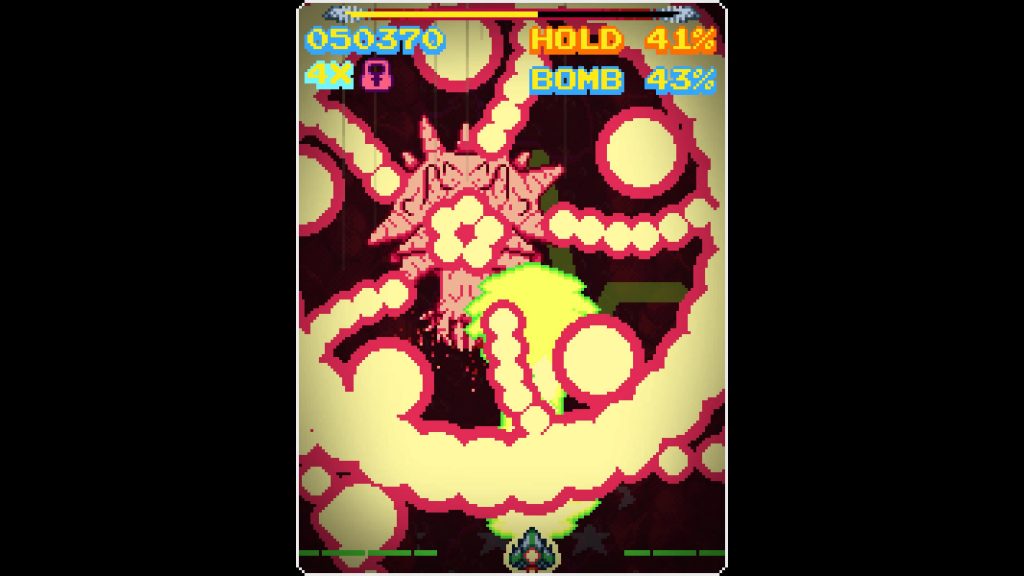 Once you get into the game, Z-Warp does the exact same thing that all Panda Indie games do.  It makes you think ‘bloody hell this is hard’ and then, in no time at all, you get used to visuals and the gameplay and you’re on your way to smashing it.  I don’t know how they manage that but it caught us out yet again.

The game only has four levels, each with a boss battle at the end.  Initially you might make it to stage two but then run out of lives but the game adds extra credits at quite a generous rate, although these only become available after your game is over.  So after two or three goes, you should be able to make it to the last level. 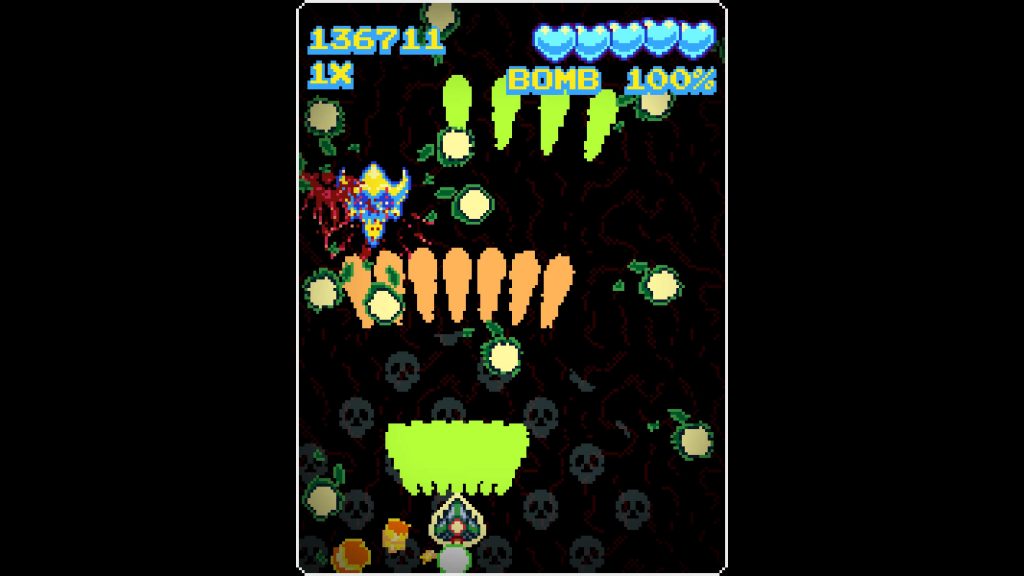 Aside from one tricky boss battle where all the danger comes at you from the bottom of the screen (hence why it’s important to know that you can fly over bosses), everything else in Z-Warp is relatively easy, at least on the game’s easiest setting.  That’ll do you just fine if you’re only here to see the game through to the end but if you try the higher difficulties, you’ll get a lot more of a challenge with much faster enemies and a slower bomb circle for you to use.  You’ll need to dip into it for one of the trophies too but otherwise you get two pretty easy Platinums for your four quid here.

Now, oddly, this might be our favourite game from Panda Indie.  Sure, it lacks the interesting characters and mad enemy designs of the Project Starship games but the game mechanics feel a bit more refined.  There’s something about timing your bombs perfectly in order to safely pass through an otherwise unavoidable line of bullets that just feels so tense that we couldn’t help enjoy the satisfaction of doing it and while the game still has the odd visual style of the other games, it’s surprisingly easy to read what is happening on the screen.  It’s not ‘funny’ in the way that the other games try to be but it doesn’t need to be either. 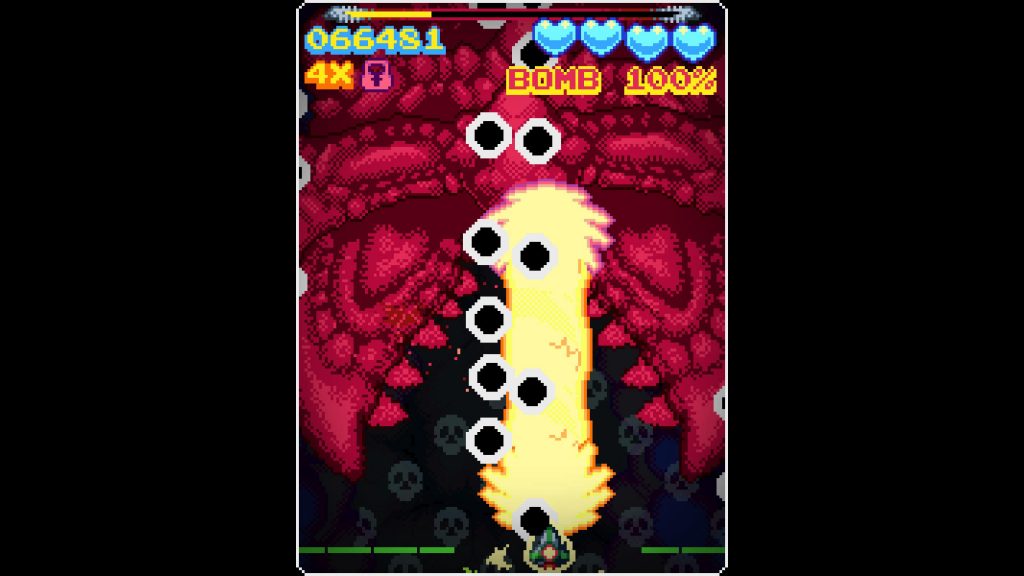 The highlight, visually speaking, has to be the boss battles.  They’re suitably insane affairs with screen-filling monsters throwing seemingly insurmountable amounts of firepower at you as everything flashes in red, white and whatever other colour the devs choose to throw in.  It’s typical for this developer but so much more interesting than the usual giant tanks and helicopters that this genre is known for.

The music is really good as you’d expect from this developer and it’s not the usual chiptune, Amiga-style stuff that you usually get on shoot ’em ups.  There’s a bit of quality to it.  The sound effects aren’t anything special but they do a job and the little chime noise that sounds when your bomb fully recharges is pretty useful. 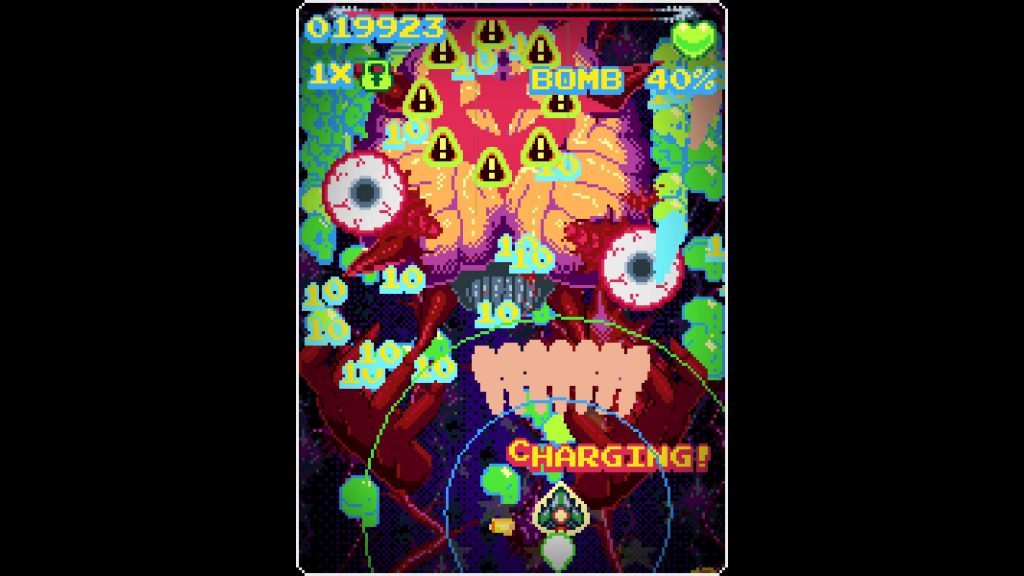 Aside from the game’s short length, there’s not much to moan about here.  There’s no performance worries and everything moves around very smoothly.  Hardcore shoot ’em up fans will probably be done with it in an afternoon but Z-Warp does work brilliantly well as an introduction to the bullet-hell genre and that’s where its short length helps because you’re not having to memorise half an hour’s worth of intricate levels and bullet patterns.

If you’re looking for something harder and more in-depth, PSN has better options for you.  But if you just want a short but fun shoot ’em up that you can play over and over again, Z-Warp is certainly worth a look.

Z-Warp
7 Overall
Pros
+ Fun, smooth gameplay
+ Easy to learn and enjoyable to master
+ Good music
Cons
- Might be too easy for some
- Quite short
Summary
We've seen this type of shoot 'em up a few times from this developer but this is the best one yet. It might work better as an introduction to the bullet-hell genre but genre veterans should give this game a go too, mainly because it's just a lot of fun to play.