Slayaway Camp has been around for over a year on other platforms but has now stalked its way onto the PS4 in Slayaway Camp: Butcher’s Cut. A simple puzzle game at heart, its aesthetic choice of an ’80s horror series does a great job of making it feel fresh. 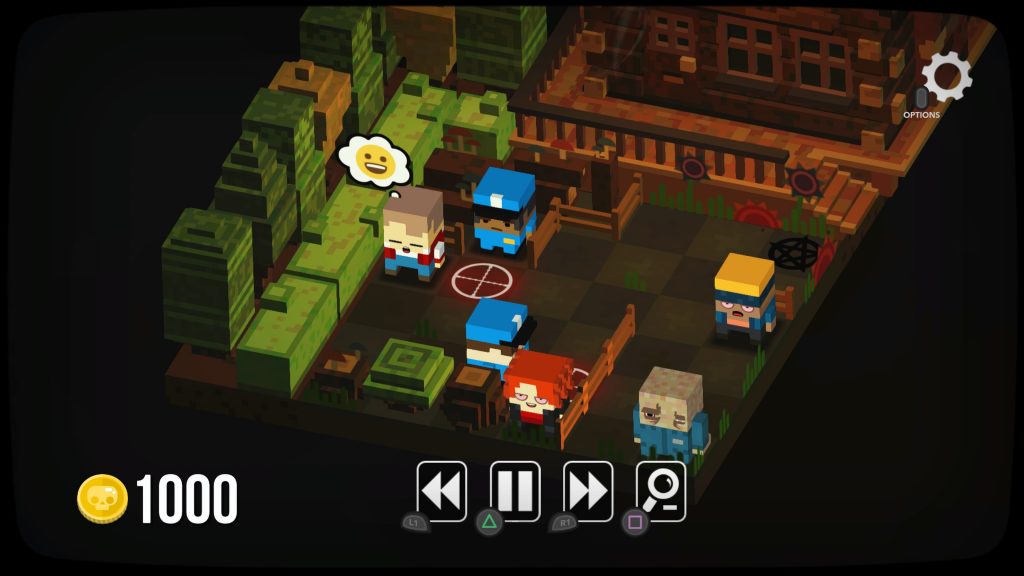 The menus are set in a video store and you’re selecting a film to play through. Initially you’ll only have Slayaway Camp but as you progress you’ll have Slayaway Camp 2, 2.5, 3 all the way up to X. Each film has at least ten levels and has you playing as a squat, cute(-ish) serial killer, starting with a Jason-type in a skull mask, then an overprotective mother and so on. The objectives and the rules are always the same though – kill all the civilians with your limited move set.

This can be done in a few ways but as with any good puzzle game (or any type of game for that matter) things start off simply and each set of levels introduces new mechanics and it’s this layering of complications that makes things more difficult as things progress.

As the killer you can move in the four cardinal directions, once you start moving you won’t stop until you hit something. Dotted around the stage will be your victims and so you have to make the correct moves in order to encounter them. Sometimes it will be as simple as using the scenery to your advantage, other times you’ll need to manipulate other victims to help you. When you walk into a victim you kill them, but remain standing on the square before them. If when you stop moving you’re stood next to a victim then they will run away from you, if you kill someone who is standing next to someone else then that other person will run away. 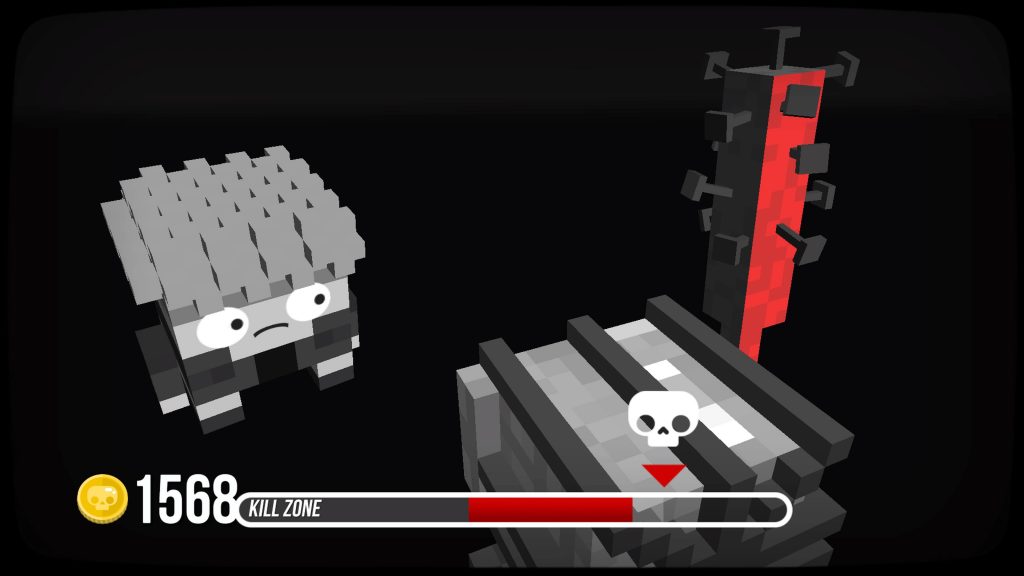 These basic rules remain throughout the game but you’ll soon have to be aware of exits that people can escape through, cats that you must not harm, shelves which you can knock in either direction to redesign the map, electric fences, holes, dumb cops, SWAT teams, light switches which stop people reacting to your movements and more. Learning the order in which you need to do things is key, as a lot of the time you will need to use one victim as a stepping stone in order to kill others and the more complex levels have you setting up a chain of events before making your move in order to make it through.

The one different level type is exactly the same but you have a limited move count before the SWAT team arrive meaning you can’t have any wasted movements, though I actually generally found these a little easier as there are only so many things you can do in such a limited amount of moves. Failure isn’t a problem as you can restart the level with the tap of L2, though the title card being shown every time slows things down a little and if you only want to make fine adjustments then you can go back a move at a time with L1. If you get stuck then R1 will give you a clue for a little bit of money which you earn between levels.

A simple minigame of a kill scene will show and you have to stop a pulsating bar in the correct spot. Do so and you get the kill and some cash, fail and you get a little cash and the scene plays out differently. As well as tips, cash can be spent on new kill scenes and new killers to use in the levels. Different killers have a different appearance, obviously, but also have special kills of their own. 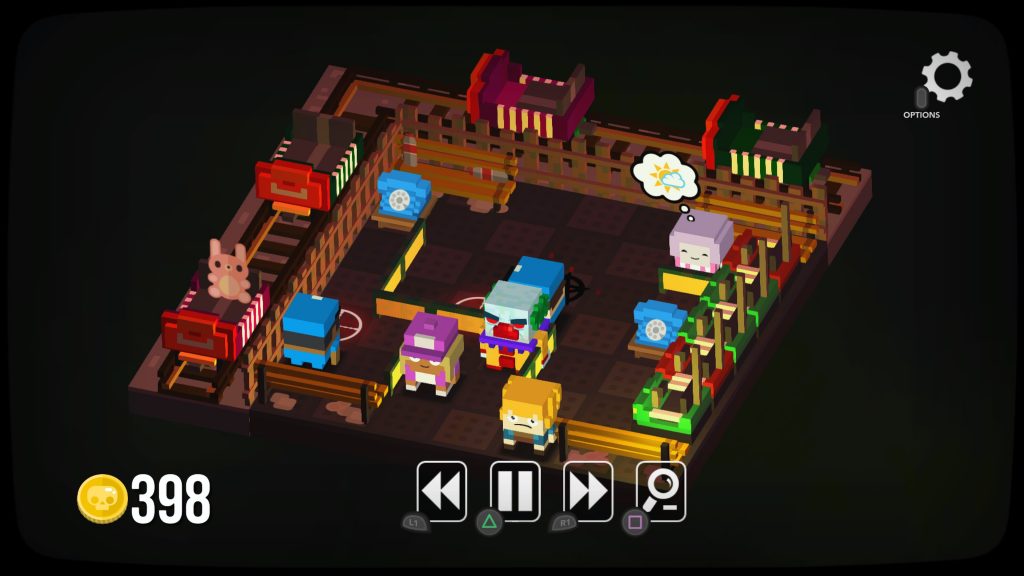 If you just want to play this as a puzzle game you can disable kills and the blood but for those that don’t mind a bit of cartoonish gore then there are a lot of different kills that are, more often than not, played for laughs rather than being torture porn. They tend to be quite quick which means the idea can be more amusing than the actual rushed animation but I appreciate the idea and it fits well with the rest of the presentation. A trailer for the film you’re about to start with a voice over introduces the setting and shows a love for the genre but also pokes fun at how silly they can be. The cutesy graphics allows them to get away with plenty and the music, although a little repetitive, wouldn’t be out of place in a horror film. The Friday the 13th ‘Ki ki ki’ sound is well used, otherwise you mostly just get screams and cartoony murder sounds.

I found the game got a little bit repetitive before the end though I enjoyed it throughout. You could argue that it’s simply due to the amount of levels that are in here, this is a very generous package. There are ten normal films, each with ten or more levels, then you unlock harder versions of those levels (NC-17), and deleted scenes. Then there are the DLCs that are bundled in this package which add yet more levels, plus a mode where you just play the minigame over and over to get more cash quicker. You cannot complain about the amount of game you’re getting for the price. 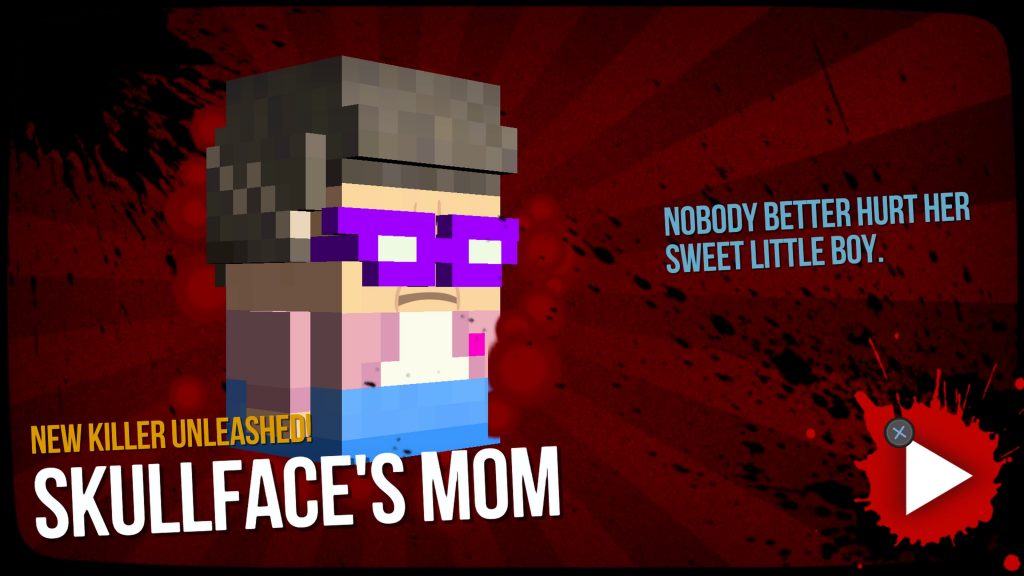 If you like logic puzzles then Slayaway Camp: Butcher’s Cut will certainly keep you occupied for some time. Even if it’s not the type of thing you normally go for then the presentation will carry you through at least part of the way. Each level is cleverly crafted and the generous restarts, rewinds and tips will help you keep making swift progress. Although it still looks like a mobile game in some ways it’s a very well made one. The developers had an idea and ran with it and that’s to be respected.

Slayaway Camp: Butcher's Cut
7 Overall
Pros
+ Great presentation all round
+ Simple mechanics are used in many ways
+ Lots and lots of content
Cons
- Can get repetitive
- Still resembles a mobile game
- Not all kill animations land the joke
Summary
Slayaway Camp: Butcher's Cut offers a wealth of content for those who like puzzles. The '80s horror film aesthetic adds a lot of character to the huge amount of cleverly built levels but some may find it a little too repetitive before they reach the end.