We rather enjoyed the last Sky Force game.  The core shooty mechanics were very enjoyable and while the constant upgrading of your plane did lead to a fair bit of grinding, there was something deeply addictive about getting all the medals on each level and working your way up from the basic peashooter weapon to packing the kind of firepower the average American student takes to college when they are a bit miffed.

Sky Force Reloaded carries on in exactly the same vein as 2014’s Sky Force Anniversary by throwing you right into the action.  While the game is obviously a vertically-scrolling shoot ’em up with obvious nods to arcade classics such as 1942 and Flying Shark, the upgrading-centric, rogue-lite aspect of the gameplay is just as evident.  This is illustrated right away when the game pulls the same switcheroo that Anniversary did by starting you off in a powered-up ship before having you eat a bag of dicks against the game’s main adversary.  You are then resurrected in a far less-powerful plane and tasked with clearing out the game’s dozen or so stages. 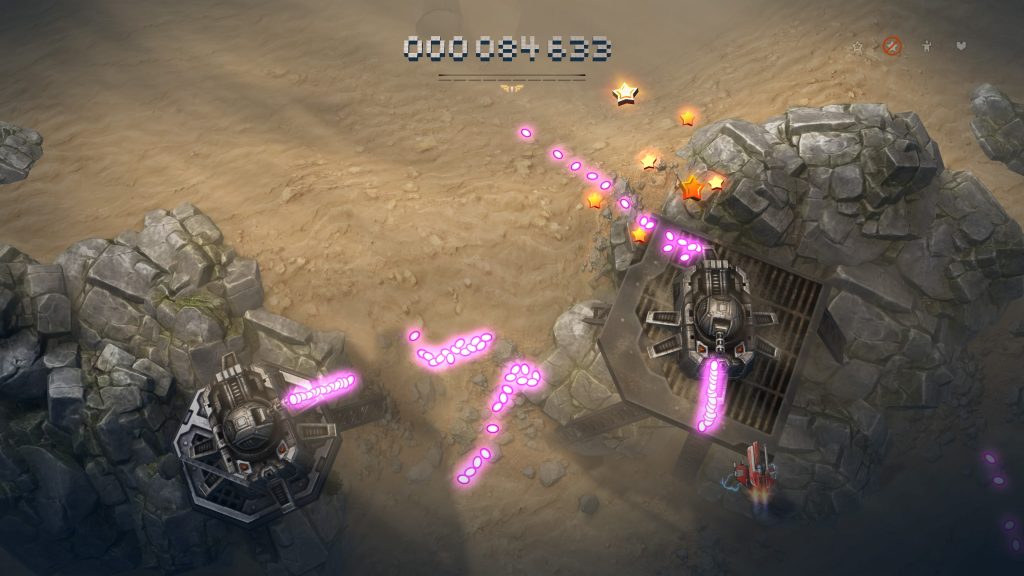 You fly up the screen taking out airborne and grounded enemies over land and sea and they drop stars that you can collect and then spend on upgrades such as improved armour or beefed up weaponry (or the ever-helpful star-attracting magnet).  The need to upgrade is apparent pretty quickly with the difficulty level between stages jumping pretty savagely to the point where you’ll need to replay old stages quite a few times before taking the next one on.  Thankfully, the game’s clever medal system rewards you for passing certain challenges on each stage such as destroying every enemy, rescuing every stranded soldier and for taking no damage.

The shooting here is just as good as in Anniversary.  Your plane’s movement (delivered by way of the left analog stick) is slick and precise and the action gets more satisfying as the level of challenge, and your ship, is beefed up.  The game rarely goes full bullet-hell and you can get by for the most part on reflexes and skill although a little bit of memorisation helps when going for some of the trickier medals later on.  Also, as before, there is no ground attack button.  This is a good thing. 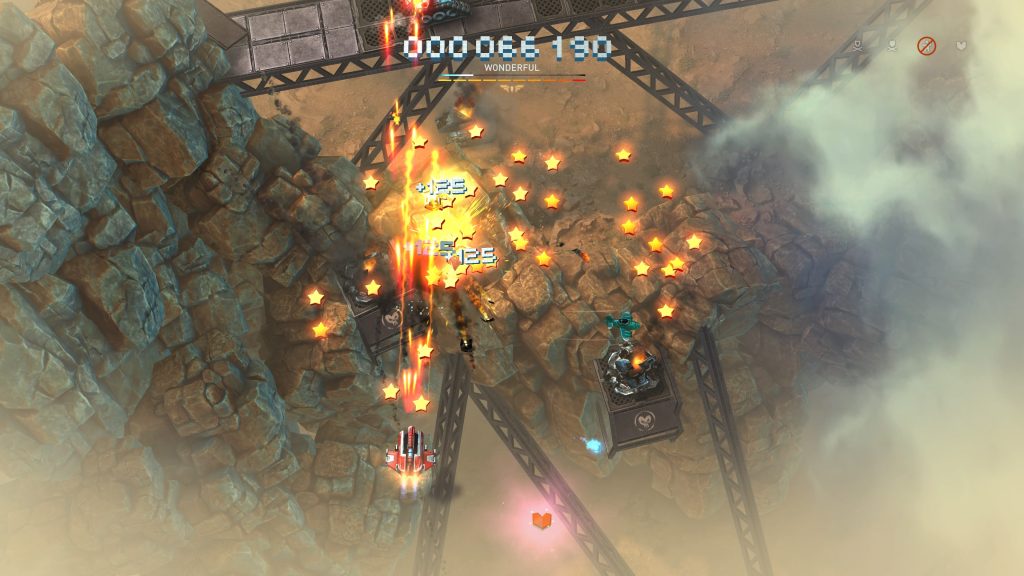 The obvious criticism here is that this is so very similar to the previous game that it almost feels a little pointless at first going through it all again but the increased number of stages (there are five or so more this time) has also been met with extra upgrade options as well as new planes to unlock and technicians to earn that will bestow extra buffs on you.  In an age where games like FIFA get away with releasing the same thing over and over each year, we can forgive an indie game doing it but Sky Force Reloaded does bring enough to the table to make it all worthwhile.  And besides, the series is fun enough that we’re glad to be back in its skies.

As of right now I’m fully addicted all over again.  The rogue-lite stuff is adding a good amount of depth to what would potentially be a fairly plain (arf!) shoot ’em up, at least one that isn’t full of complex scoring systems, and the shooting action appeals, as ever, to my love of simple arcade action.  Tailoring your strategy to focus on 100% enemy clearance as opposed to clearing a no-damage medal adds fun wrinkles to the gameplay too. 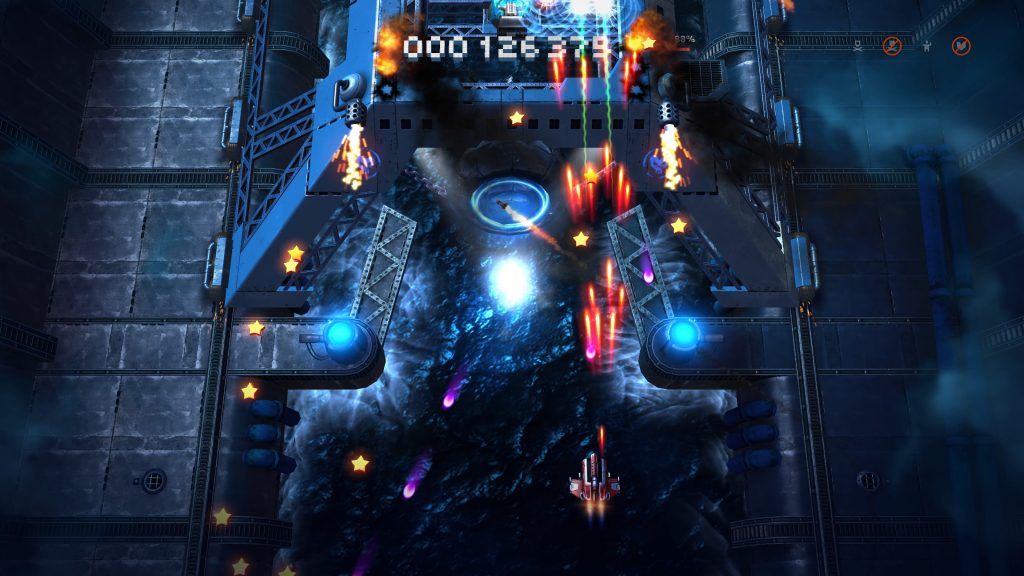 Visually the game is a little ordinary.  The backdrops are a little uninspired and your plane’s shadow is clearly at a fixed height regardless of what you appear to be flying over which means that there is no actual height below you but it all looks particularly sharp and detailed and, as a quick reinstall of Anniversary has shown, this is a little bit sharper and smoother than its predecessor and positively glows in 4K (your mileage might vary there).

The screen does tend to get a bit full with firepower (and the aforementioned stars) but, for the most part,  you can usually assess where the threats are.  You do need to concentrate though or death will sneak up on your fairly easily. 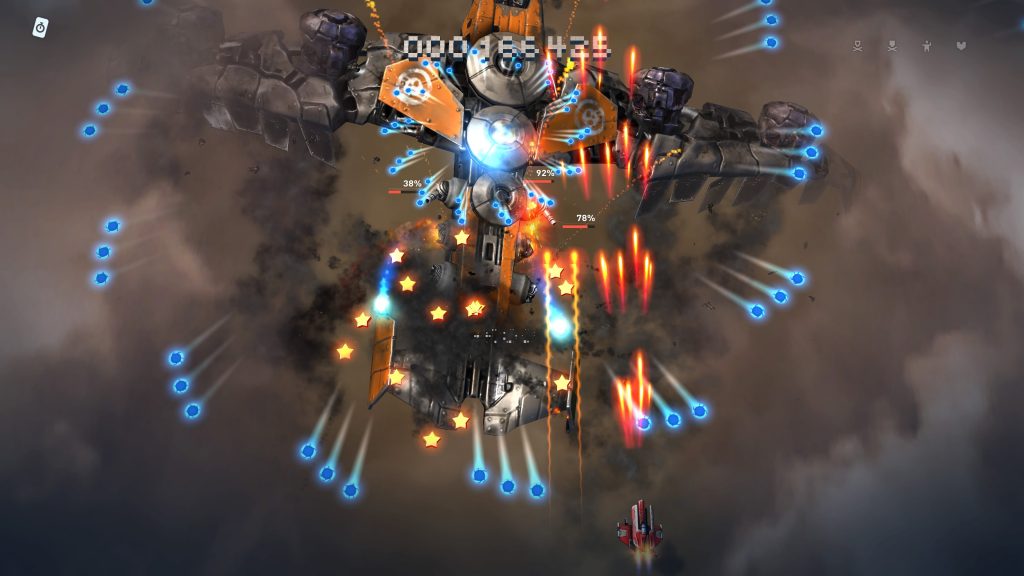 Unfortunately, the Vita doesn’t get a look in this time.  The previous game was cross-play with cross-save and that was awesome but the Vita isn’t supported by Reloaded which is a big shame, especially as the game engine does seem to be pretty similar to before so we’re sure it might have been possible (especially with this game being available on mobile phones).  On the plus side, local co-op is supported at least.

As ever, shoot ’em up purists might not approve of the fact that you can grind your way to some success here.  Also, the addition of temporary upgrade cards, that offer fifteen minute buffs to things such as your fire rate and star collection, can throw off the game’s balance a bit.  However, if you want a decent shoot ’em up with a little more longevity than its contemporaries, this is a really good option and if you were a fan of Sky Force Anniversary, there’s no reason not to get on board all over again.  This is a great game.

Sky Force Reloaded
8 Overall
Pros
+ Shooting action is still enjoyable
+ Upgrading mechanics are good
+ Very addictive
+ Well-designed levels
+ Sharp visuals
+ The 'no shooting' level is more fun this time around
Cons
- No Vita support
- Samey level design
- Is definitely a bit grindy
Summary
Equal parts shoot 'em up and rogue-lite, Sky Force Reloaded feels like a deluxe version of the previous game and that's no bad thing at all but don't expect anything revolutionary this time around.