It’s not everyday that you get a bullet hell shoot ’em up inspired by Korean mythology but Shikhondo – Soul Eater is one such game thanks to it coming to us from Korean developers DeerFarm.  They recently introduced the game on the official PlayStation blog which really set up it up as a labour of love for the studio.

When it comes to bullet hell, the most popular developers out there are Cave, the genre virtuosos that gave us the likes of Dodonpachi, Guwange and Deathsmiles and if you’re dipping your toe into the genre for the first time as a creator, ripping them off is the smart play and, quite wisely, DeerFarm have stuck to the formula. 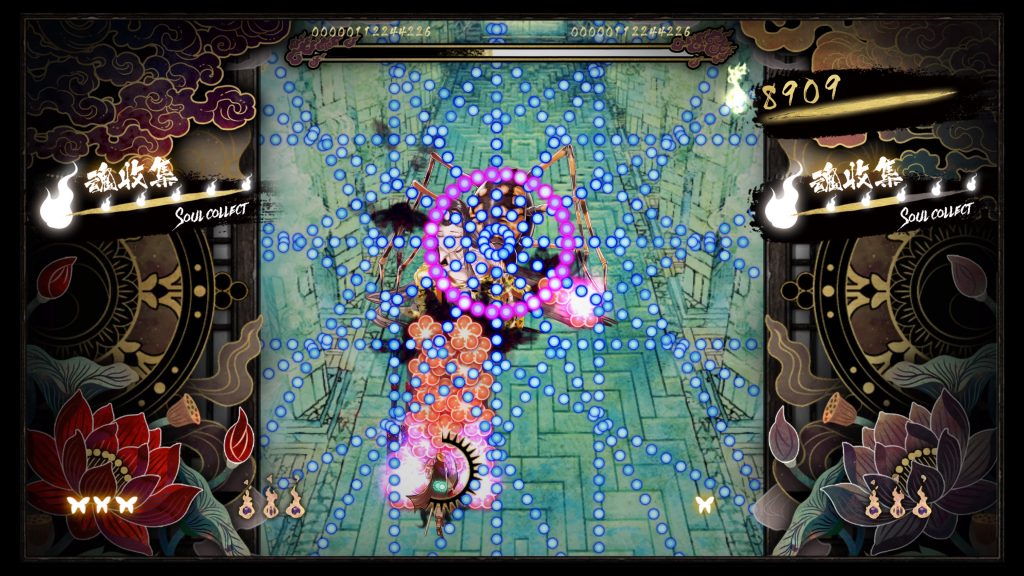 This is a vertically-scrolling shoot ’em up.  That means you’ll be down at the bottom of the screen, shooting upwards at the many enemies that will drop down into the screen above you.  To fend them off you’ll be tapping, or most likely holding down constantly, the

which will also make you move slower than normal.  This is more useful for boss battles or other sections where you need to both focus your firepower but also weave through tightly-grouped enemy bullets. So far, so Cave.  For ‘The Girl’ who is the other character you can select, this also increases firepower by summoning two remote firing blobs of light that lock in on enemies.

Finally you can press

which activates Soul Collect mode.  This acts as a bomb but when pressed again activates a further level of Soul Collect which temporarily increases your firepower if you have filling up your gauge enough which you do by skimming enemy bullets.  Or at least that’s what I think was going on.  The short tutorial when you start Arcade mode doesn’t really explain it very well. 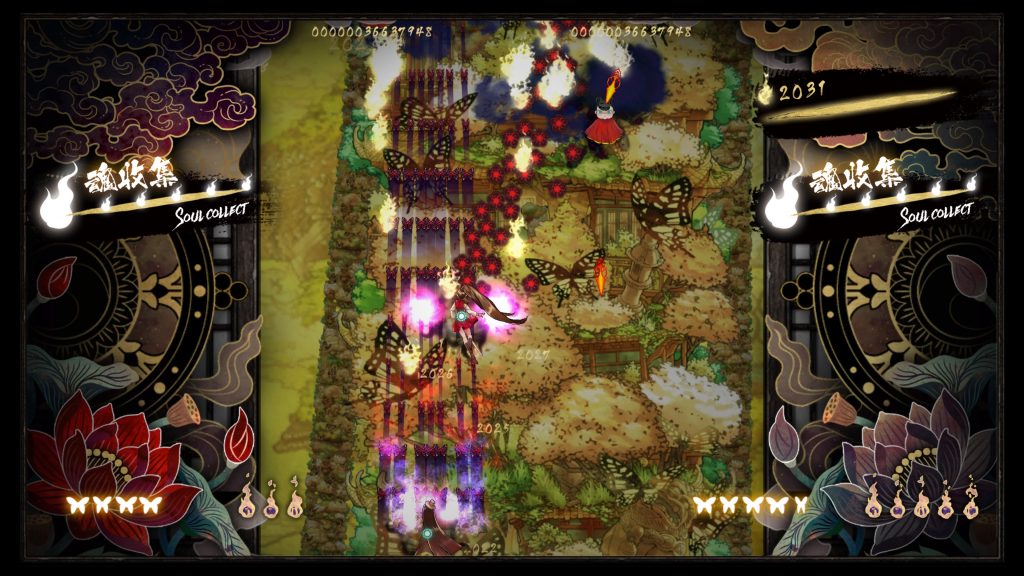 In terms of the basics, Shikhondo feels pretty authentic.  The basic controls work well and give you the manoeuvrability you need to survive and the game isn’t shy about absolutely flooding the screen with bullets, so at least you know the game isn’t just phoning it in.  On the surface this feels like it could be a genuine arcade game.  Right down to the ability to continue when you lose all of your lives.  It’s also quite a compact game with just five stages, none of which are particularly long.

That said, the game does absolutely ramp up the difficulty leading to some encounters where losing a life feels somewhat unavoidable.  Shoot ’em up pros may see ways through it that my mere human eyes can’t see but casual players probably won’t be getting anywhere near completing the game in one credit, especially on anything above Easy difficulty.  Of course, moaning about difficulty on a bullet hell shooter is somewhat missing the point and I get that but it does stick out here.  Especially as the first half of the game is an absolute formality in terms of being able to breeze through it. 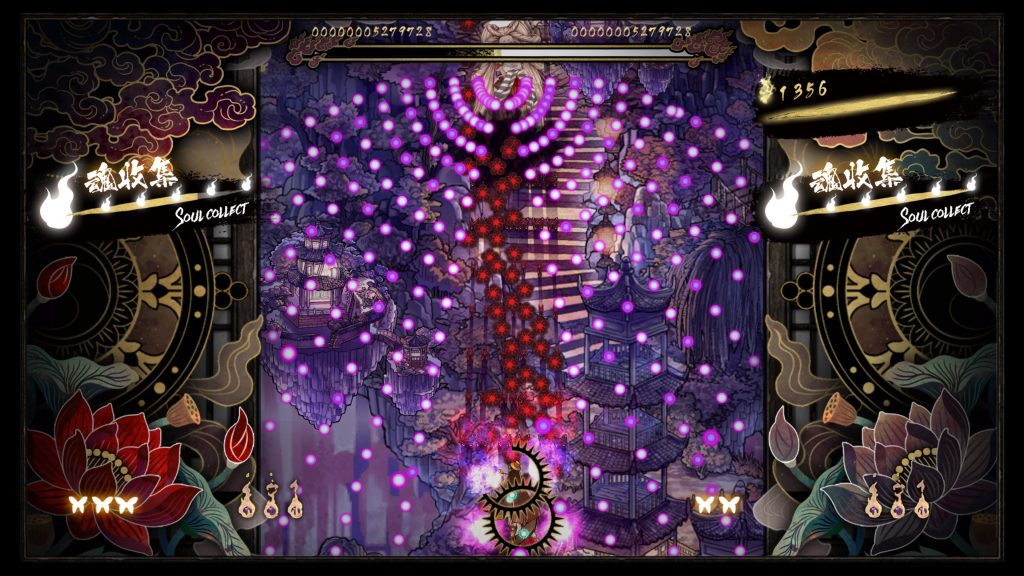 A lack of variety is also a problem.  Initially the game is pretty exciting as you plough your way through all the enemies before facing off against the bosses, all of which are weird girls who turn into even weirder girls when you defeat their first form.  Their second forms are more demonic and therefore more dangerous.  The game does through some pretty bombastic drum and bass at you during these battles which heightens the madness of it all too.  But once you get past each boss, you realise that you’ve kind of seen it all before.  Even the music in these boss battles stays the same each time.  And then, before you know it, the game’s over.

The game offers four difficulty levels, a boss rush mode, local co-op and a ‘Hardcore’ mode but none of this gives you anything different once you’ve experienced the basic Arcade mode.  There is a custom mode where you can change a few parameters such as how your soul gauge is filled and what happens when you  press

but it’s not going to massively change anything.  Finally an online leaderboard completes the list of features available. 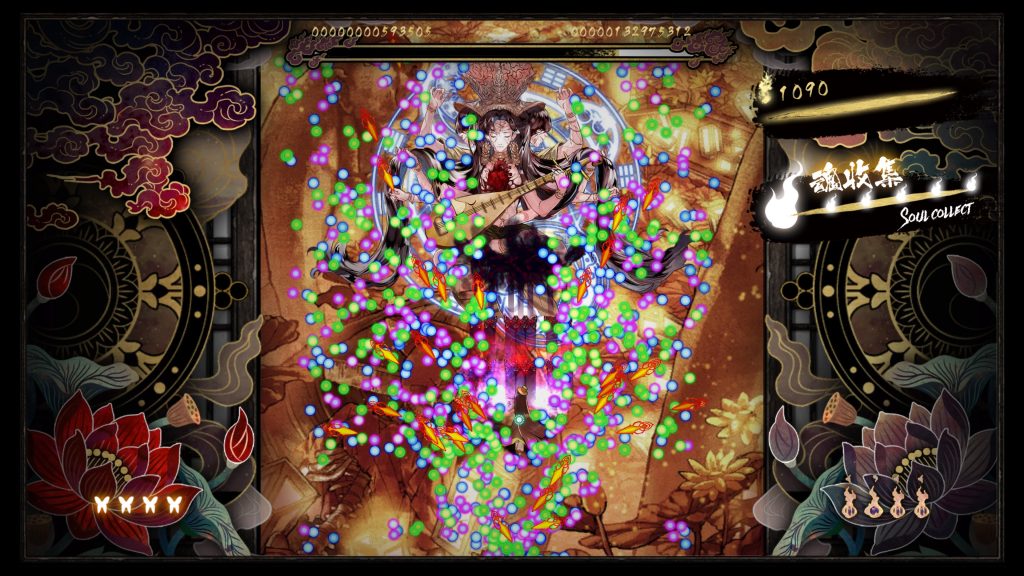 With that all in mind, yes, this is a fairly simplistic shooter but that’s not necessarily a bad thing.  These games can often get bogged down in weapon systems, complex scoring rules and layers of additional gameplay mechanics which can make them a little impenetrable.  Take something like Dariusburst.  It’s a great game and no doubt one that is better than this but it’s not exactly intuitive to master whereas Shikhondo is probably at the other extreme (cue a load of ‘shmup’ fans telling me that Dariusburst is super easy to understand and that if you want complex you should play Pink Sweets Ultra  Melty Burst Machine Romance Type N or some shit).

One thing that can affect these games is the clarity of the visuals.  Shikhondo starts off looking like it’ll be a nightmare.  Puffs of black smoke litter the screen everytime you kill anything (which is of course all the time) but you do get adjusted and for the most part the bullets are pretty easy to identify.  Also, you’re not constantly picking up medals or whatever, so you’re not always trying to figure out if that thing heading towards you is going to give you points or take a life from you.  And as manic as the bullet patterns get, you’re usually able to see what’s going on. 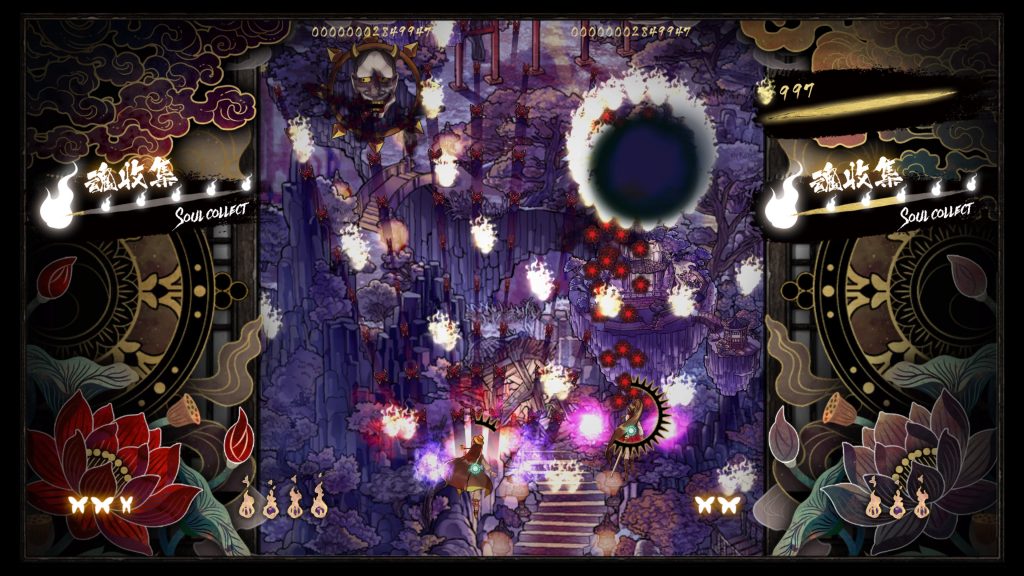 The game looks pretty good too.  The main characters and enemies are all cleanly drawn with a subtle, cartoonish look to them.  The bosses are frankly mental and really add a bit of personality to the game.  You can see a few of them in the screenshots here but, yes, they are often obscured by a hundred plus bullets.  The backdrops have a hand-drawn storybook style to them and while aesthetic is pretty classy and befits this type of shooter, the images are a little bit low-res and blurred as if captured in a lower resolution.  It gives the game an unnecessarily cheap look and is a bit of a shame.

The game’s sound design is decent enough with dynamic sound effects and a few language options but the star is the music which we mentioned earlier.  While there is some repetition with the boss battles, the rest of the game does have a good soundtrack.  Which is good as that’s something that tends to matter in this genre for some reason.

Overall, Shikhondo is probably one for shoot ’em up beginners as it is reasonably easy to understand and you can get quite a bit of fun out of it without being too taxed before the game ramps things up.  Casuals will keep hitting the ‘continue’ option when they die and won’t feel locked out of the content on offer while experts will surely be tested when it comes to unlocking the game’s tougher trophies but this isn’t a game that will be remembered for too long and probably won’t inspire sequels and remakes in the future.  But for now at least, it’s a pretty good effort.

Shikhondo: Soul Eater
6 Overall
Pros
+ Very playable
+ Accessible gameplay
+ Good boss designs
+ Local co-op
+ Well presented
Cons
- Could be more interesting
- Lacks variety and gameplay mechanics
- Visuals are a bit mixed in terms of quality
- Some bullet patterns are a bit much
Summary
Shikhondo works well as both an introduction and a tribute to the bullet hell genre but is just a tad too basic to stand out against the competition.