I can’t swim so the idea of being stranded under the sea is probably my ultimate nightmare. Narcosis, a narratively-driven horror from Honor Code, looks to deliver a claustrophobic tale of isolation and survival under the weight of many atmospheres of pressure. Sounds fun. 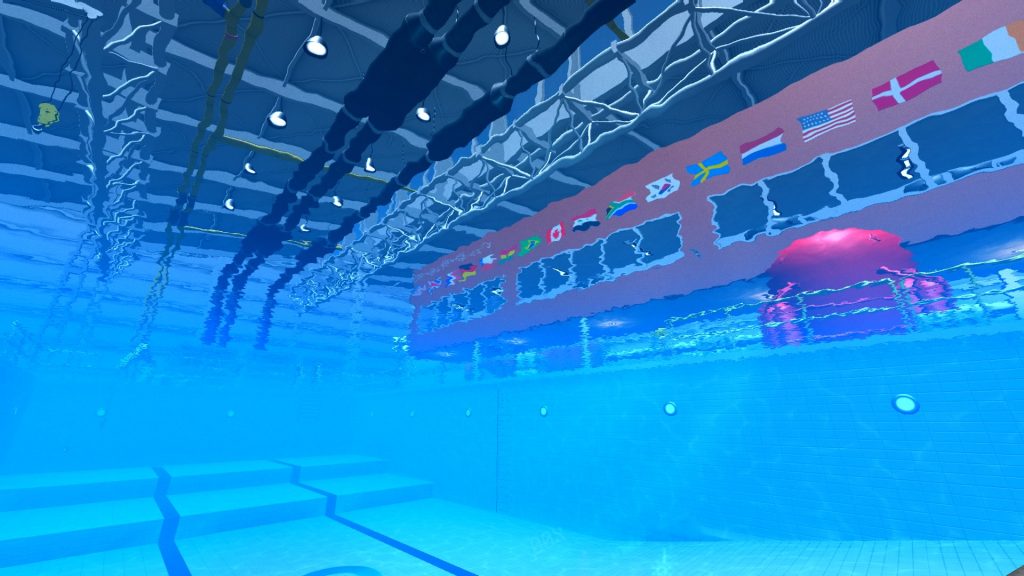 Taking place exclusively underwater, a disaster at a methane mining facility has left the staff scattered and the workplace completely torn apart. As a survivor, you’re tasked with finding others whilst trying to survive the harsh depths. It’s an oppressive situation all told by a narrator whose focus is more on protocol, survival and clear thinking within a stressful situation.

It’s a narrative that’s told very well. The how and why of the disaster isn’t really explored as the survival of this talking head takes precedent. This singular concentration allows the writing to be nuanced and the smaller cast makes the story feel tight and cohesive. The first person perspective does help you experience the gravity of the event. 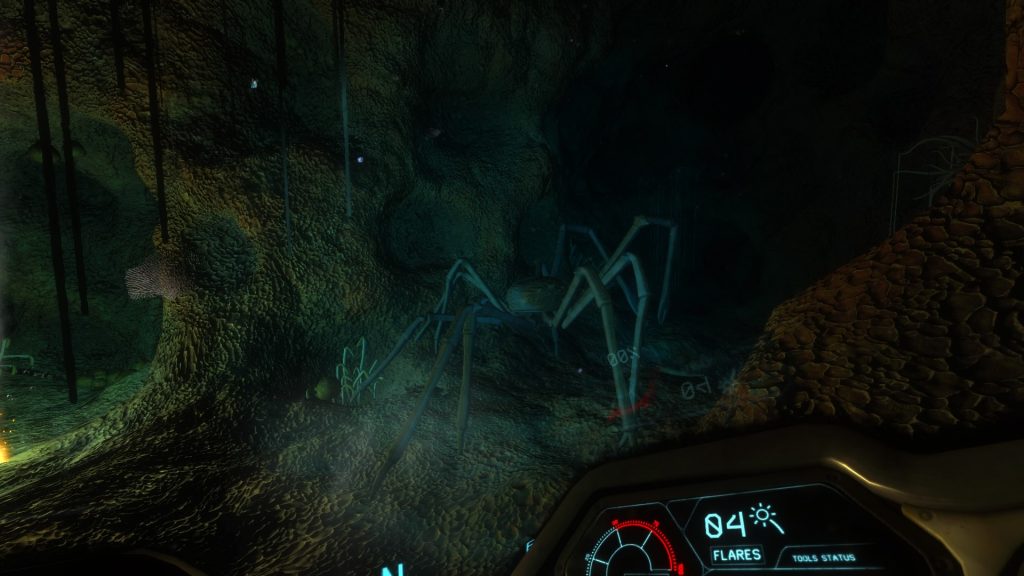 This is bolstered by a soundly realised visual treatment. The ocean floor feels expansive, even if the game itself is incredibly linear. Limited visibility does allow you to hone in on any light sources you can spot. It sounds like something straight form a game developer playbook but these landmarks helped stop me from getting lost on what’s ostensibly a single track. These also offer rare examples of colour in an otherwise bleak darkness. Coral is detailed and indoor environments look lived and worked in. Documents scatter rooms, living quarters have posters and personal artefacts in believable places and it helps capture the moments of operation before disaster.

Movement in Narcosis is handled simply. You walk with the left stick with and have a thruster pack to provide a jump. As a result, you can expect some basic platforming, particularly when you venture into the labs. It’s not difficult to get your head around but there are leaps of faith which, when failed, can halt your progress a little. From what I can tell, thrusters don’t drain your oxygen stocks to significant degree. They can overheat which is what limits your ability to jump. The gaps you bridge aren’t problematic with the environment more likely to snag you. 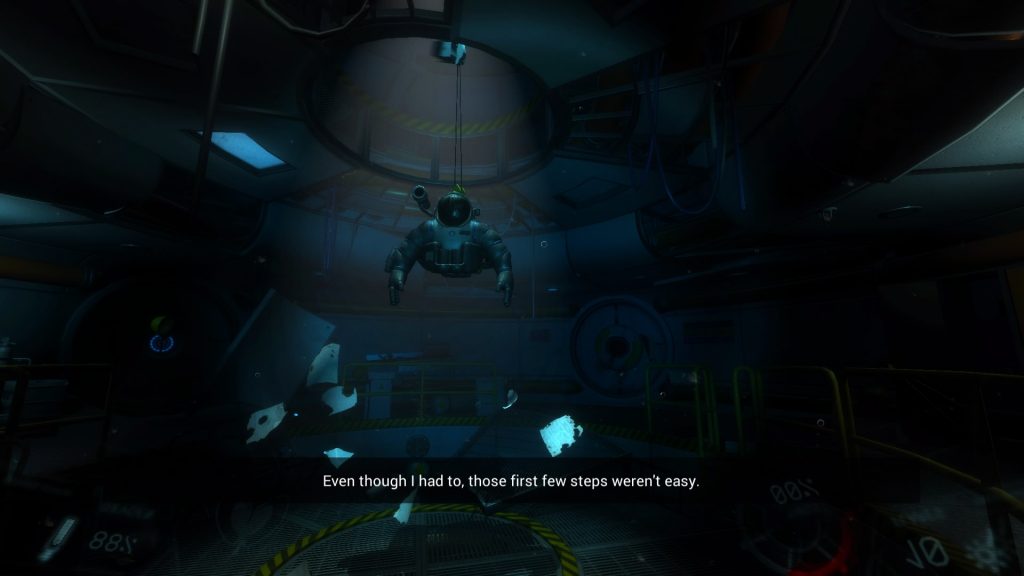 Music and sound helps sell the isolation and oppression of Narcosis even more. The ambience is enhanced and the moments of silence help sell your loneliness as you scour for signs of life. The narration is really well-delivered. You get the impression the person behind the mic is being level-headed, clearly thinking about has been able to manage the trauma a disaster like this would bring. It does occasionally contrast with the visuals your character is seeing and it all leads up to a beautifully executed stinger.

Narcosis does fall short in the horror department. Narrative experiences like this don’t tend to offer much in the way of threat or failstates. Narcosis tries to buck this trend by giving you wildlife you need to avoid or confront. There’s a couple of instances where this plays well. Finding yourself in a cave of Spider Crabs is chilling. They require stealth to negotiate and can really help inspire tension by their presence. Unfortunately, the game rarely keeps this up. On top of that, the idea of failure states in a game like this does have the potential to hinder pacing.

When it does come time to combat underwater adversaries, it’s a clumsy exercise in timing as you try to slash Angler fish or squids with your knife. These enemies don’t deal damage back but the exertions can leave you wanting for oxygen. Thankfully, oxygen depletion feels rare. Tanks are commonplace, particularly when you venture into the main plant. Narcosis seems to want fear and danger but it comes at the expense of momentum. In a game so short, you might be forgiven for thinking this threat can extend the clock a little. Unfortunately, I’d much prefer to carry some pace through the experience rather than stutter through it. 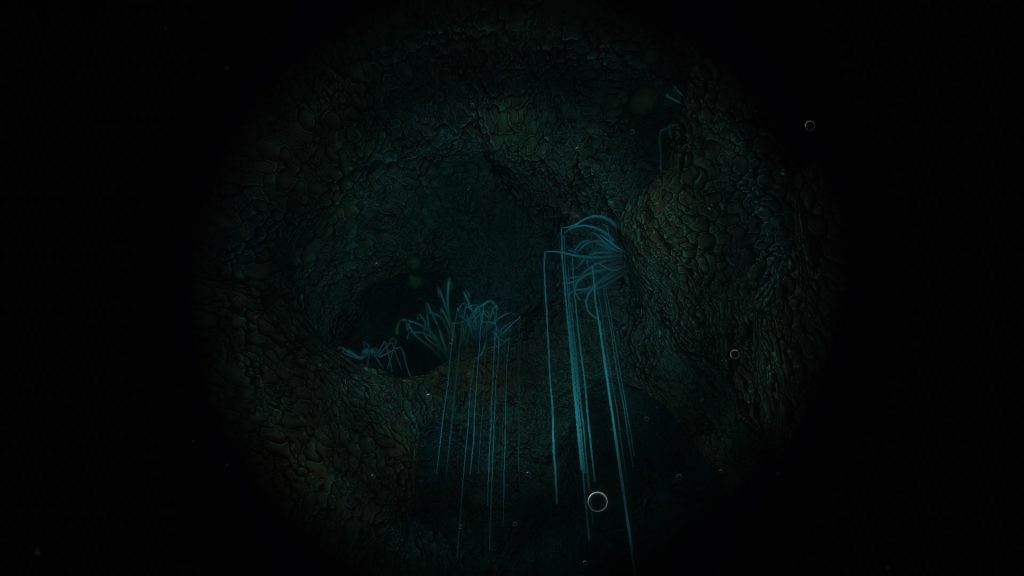 My feelings are mixed on Narcosis. I fell foul of failure a lot during my run and, whilst a lot of that was down to me, the wind was taken right out of my sails. The story managed to pull me back in. The delivery of a sit-down interview really helped push the game forward and the smaller focus was welcome. The environments are oppressive, detailed but ultimately very narrow and guided. Those wanting more might be disappointed when the credits roll after a couple of hours but Narcosis feels like a one-shot sniper. £17 might be a tough proposition for a game that feels very final after a single playthrough.

Cons
- Combat feels clumsy and superfluous.
- The horror aspects don't always hit home.
- Too short for me to personally justify the price.
- Repeated failures in platforming or combat can harm momentum.
Summary
Narcosis has a tale worth telling but it's all too brief. Failure can stifle your momentum through the detailed, claustrophobic depths. It's a game steeped in atmosphere but combat feels clumsy and the moments of actual horror feel far too fleeting.