Shadow Warrior 3 is the latest episode of the series that began life in 1997 as a PC FPS but was then rebooted in 2016 by Polish programmers Flying Wild Hog.  Since then they’ve continued the series and, indeed, the story which focuses on an assassin called Lo Wang and his battle against various demonic forces from the shadow realm.

The series has never taken itself too seriously but this entry is as silly as it gets.  The world has pretty much been destroyed by an enormous dragon and Wang’s best friend, Hoji, is dead and so we see Wang feeling sorry for himself.  However, his old employer, Orochi Zilla, shows up and tells him there’s still a way to kill the dragon using Hoji’s mask.

So far it seems that the main issue people have with Shadow Warrior 3 is Wang himself.  He’s dumb, he’s obnoxious and, frankly, pretty annoying but it’s all played for laughs.  The key to enjoying the game is to just ride with it and try to ignore the excesses of Wang’s daftness. 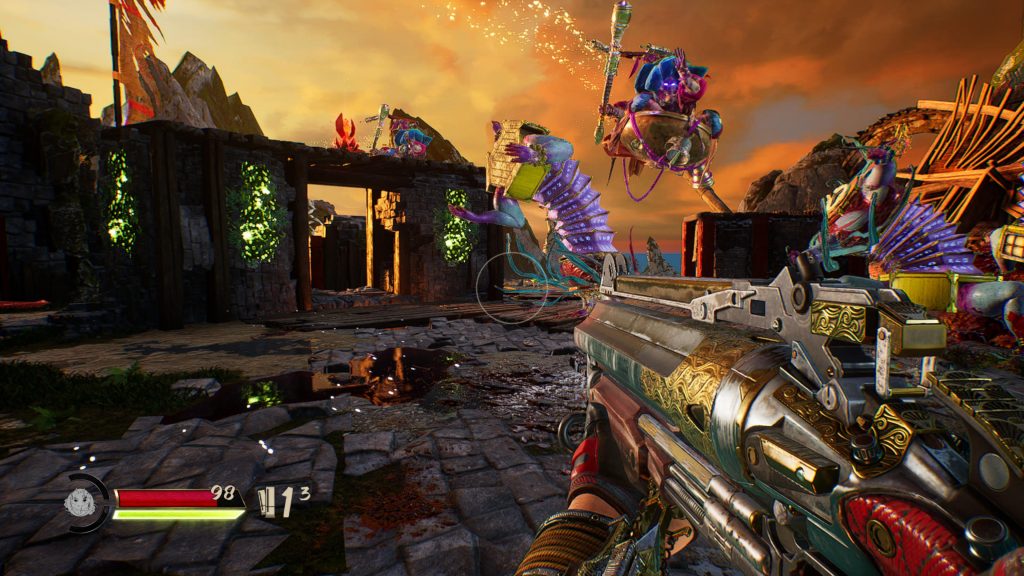 In terms of the game, this one is a little different to the previous two games.  Sure, those games were first-person shooters that combine gun and sword play but where the first game was pretty traditional in terms of its layouts and the sequel was a bit more non-linear and procedurally generated, Shadow Warrior 3 simplifies its layouts a fair bit to make a much more streamlined experience.

Essentially, Wang is a bit of a ninja.  He can run, jump, double-jump, air dash and wall run and he’s armed with a sword, pistol and grappling hook.  In an example of some excellent gameplay design, killing with a gun will make enemies drop health while sword kills make them drop ammo.  This means you always have a good excuse to mix things up. 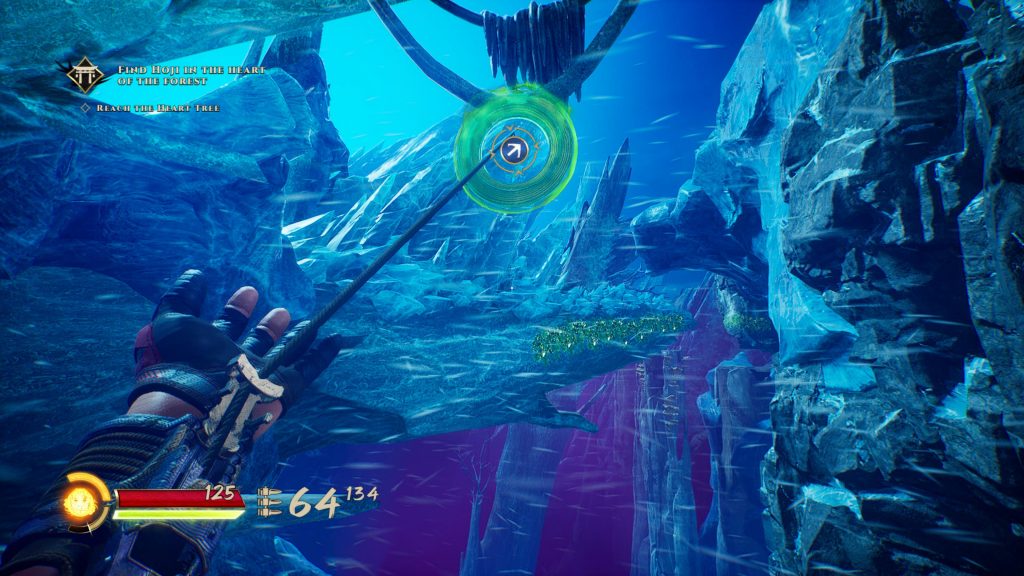 Before long you’ll start earning new weapons too.  Shotguns, twin SMGs, grenade launchers, disc throwers and railguns are all waiting to be discovered and each one can be upgraded three times to give bonuses to ammo capacity and damage.  All the weapons feel decent to use and there’s plenty of reason to use them as the game has a challenge system for getting all different types of kills which in turn will let you earn more upgrade points.

You can also upgrade Wang himself with improvements to his existing abilities including upgrading his chi-punch move which pushes enemies around (including the ability to push them off of ledges or into spikes). 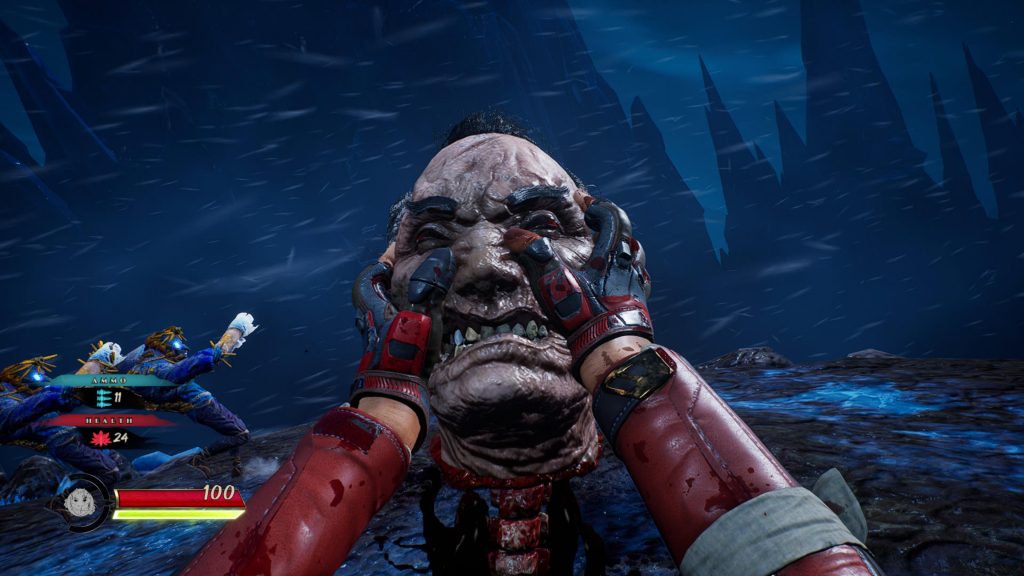 There are also ‘Finisher’ moves too which can be used to kill off enemies in one go and, depending on what type of enemy it is used on, this can unlock temporary ‘gore’ weapons such as giant hammers, drills, ice bombs and special swords that can be used to rampage through enemies.

So, as you can see there’s quite a lot going on with the gameplay.  Plenty of gameplay elements but, crucially, it all works nicely.  All of these work to make you feel like a badass with loads of toys to play with and abilities to use.  Each combat scenario gives you a degree of freedom with which to approach it. 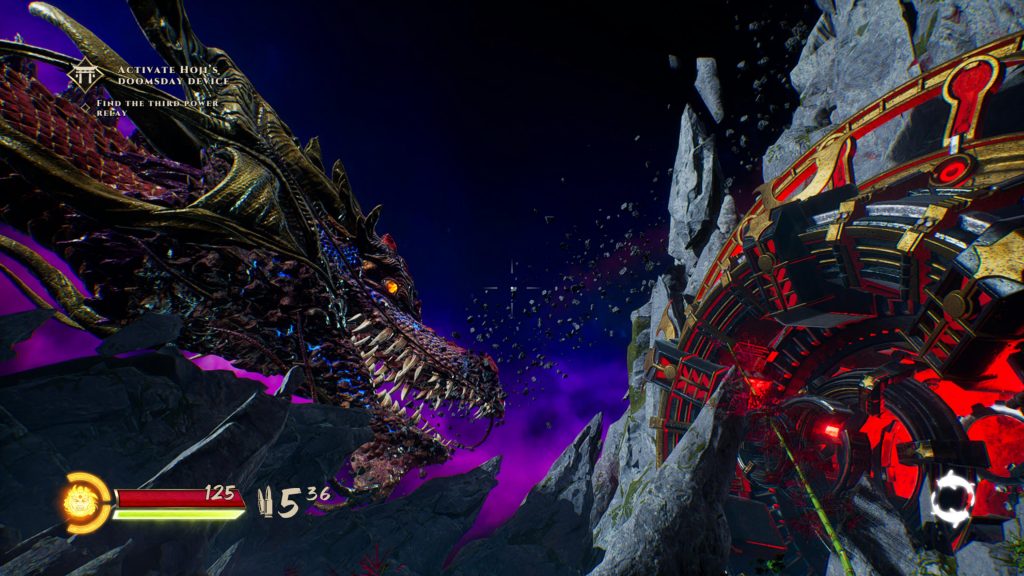 Here’s the thing.  Although we really liked Doom: Eternal as evidence by Grizz’s review, I personally didn’t.  Sure, it looked great, especially on PS5 with it’s 120 frames per second mode making it all incredibly silky smooth to play, and the combat was sensational but everything else irritated me.  The convoluted levels meant that it seemed like I was always trying to find the next switch or door.  The huge arsenal of guns was good but I was always low on ammo (I know that’s a core element of the gameplay) and I found all the upgrade stuff to be a bit too fiddly.  In the end I sacked it off for the same reasons as Doom (2016).  It was too stop/start in its approach.  Fun when you’re shooting demons and pulling out important bits of their anatomy but absolutely dismal when you’re trying to find out where to go next or handle the shitty platforming sections.

However, with Shadow Warrior 3, everything is more streamlined.  The combat goes from one arena situation to another with the way ahead literally highlighted in big yellow vines to show you the way.  The weapon upgrades are streamlined and each weapon feels worthwhile and interesting to use.  The sword is always available if you’ve run out of ammo.  The platforming stuff flows, is fun and never overstays its welcome. 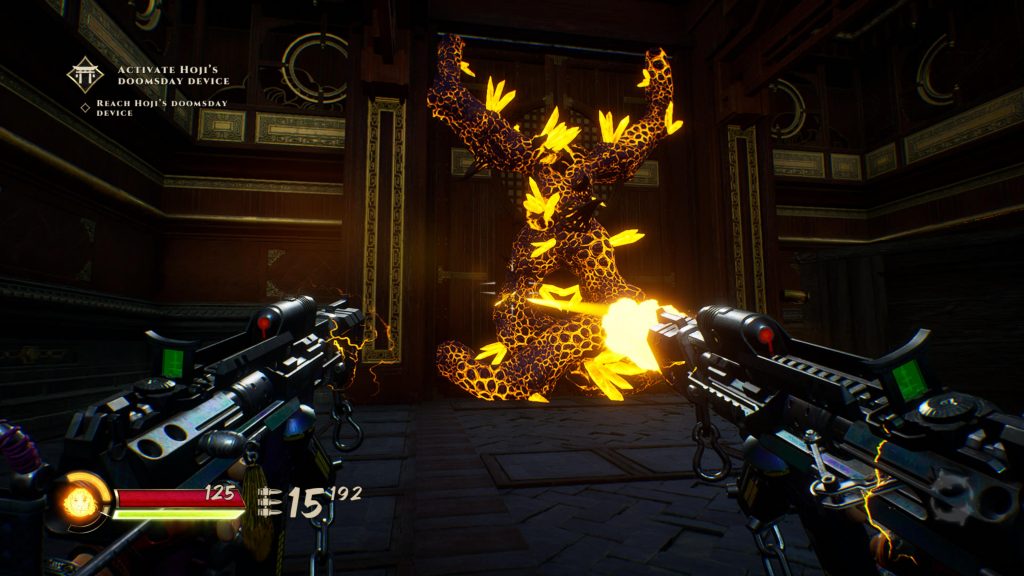 Being a PS4 title, it lacks the higher framerates and resolutions afforded to Doom: Eternal but the game is no slouch when it comes to visuals.  Played on a PS5 it’s smooth with very few frame rate dips.  The action is hectic but you can always see what’s going on even with all the blood, gibs and firepower being thrown around.  The visuals are nicely colourful too with a nice, bright feel and some varied backdrops and there’s a good sense of scale to it all, especially when that dragon is flying about. 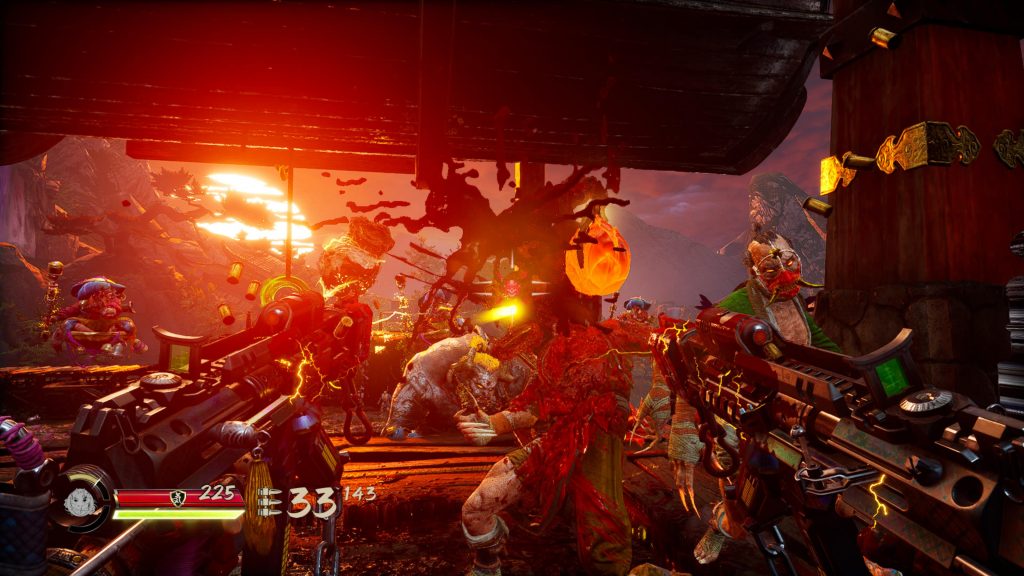 It’s not exactly rocket science though.  This is a pretty straightforward game, so don’t expect any gameplay revolutions here and there are some niggles too.  The auto-aiming really drags when it comes to moving your aim around, a lot of the best action happens in cutscenes (which is annoying as you do all the hard work of getting to a bit and then the cutscene finishes it off) and Wang’s banal monologues outside of cutscenes can start to grate a little after a while.  You could also accuse the game of being a little bit samey.  After all it’s just an arena-style FPS but played out in a linear fashion with platforming bits thrown in but the game mitigates this by not being too long, which I think is a fair way to do it.

So while other gamers and reviewers might have issues with the game for all manner of reasons, for us it comes down to one thing.  Is the game enjoyable to play?  And with Shadow Warrior 3 the answer is resoundingly yes.  It’s tremendously good fun and by avoiding all the unnecessary trappings brought to the genre by ever more complex bigger titles, what you end up with here is a game where the action never lets up.  If you’re a little jaded by the FPS genre, this game might be the one to win you back.

Shadow Warrior 3
8 Overall
Pros
+ Great action
+ Varied weapons
+ Refreshingly linear
+ Platforming is well handled
+ Looks great
+ Doesn't overstay its welcome
Cons
- Story and characters try a bit too hard at times
- Doesn't offer great value for money
- No PS5 version
Summary
Shadow Warrior 3 is a short but action-packed FPS with some of the most fun combat we've seen in a while. It's got all the action and most of the gore of the Doom games but without the constant looking for switches and doors. It's just a good time from start to end.