Rolling Gunner is a horizontally-scrolling bullet-hell shoot ’em up from Japanese developers Mebius.  Originally a 2018 Windows release, this version combines a port of the game along with its Overpower DLC that came out a year or so later.  It’s also out for the Switch and there are physical editions too which will no doubt do well with the collectors.

In this game, you play as a lone pilot who has to take on the combined forces of a rogue AI defence system called BAC.  That means you’ve got six stages to fight through, each with a large boss to battle against.  The plot only shows up in cutscenes and these aren’t particularly informative but it’s a shoot ’em up and we couldn’t care less about the plot in these things.  All we want is action and that’s where Rolling Gunner scores big. 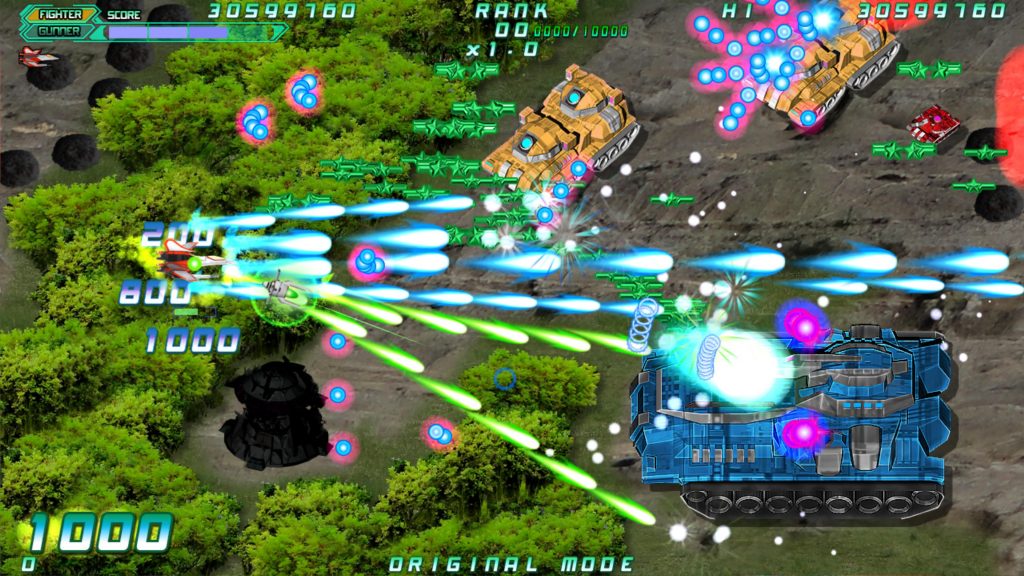 You get plenty of options from the main menu, but the main choice is which mode you’re going to play (either the original game or essentially the same game with the DLC enabled).  We’ll start with the original.   This is essentially a ’90s-style shoot ’em up with polygonal sprites set on a 2D plane and it comes complete with entirely bombastic presentation to really sell the period it is recreating and a score system that lets you get into the billions.

The game’s name refers to the gun pod that follows you around.  It shoots when you do but while your weapon shoots forward (to the right of the screen) the pod points in the opposite direction to the one you’re moving in.  Move right, it’ll aim left.  Move down, it’ll aim up.  You get it.  Anyway, this allows you to cover your back (and top, bottom and diagonals).

You have two fire modes – Fighter and Gunner.  The first is your default mode which gives you a spread-fire configuration along with the free-rolling movement for the Rolling Gun.  Gunner mode narrows down your shooting to a more focused corridor and also has the benefit of locking down your pod, allowing you to really dial in your damage.  This also slows you down, making it a little easier to navigate the waves of bullets that’ll come your way.  If you look at the screenshots we’ve taken you’ll see that the screen is often absolutely flooded with enemy firepower (all rendered in blues and pinks like some sort of fatal gender reveal party). 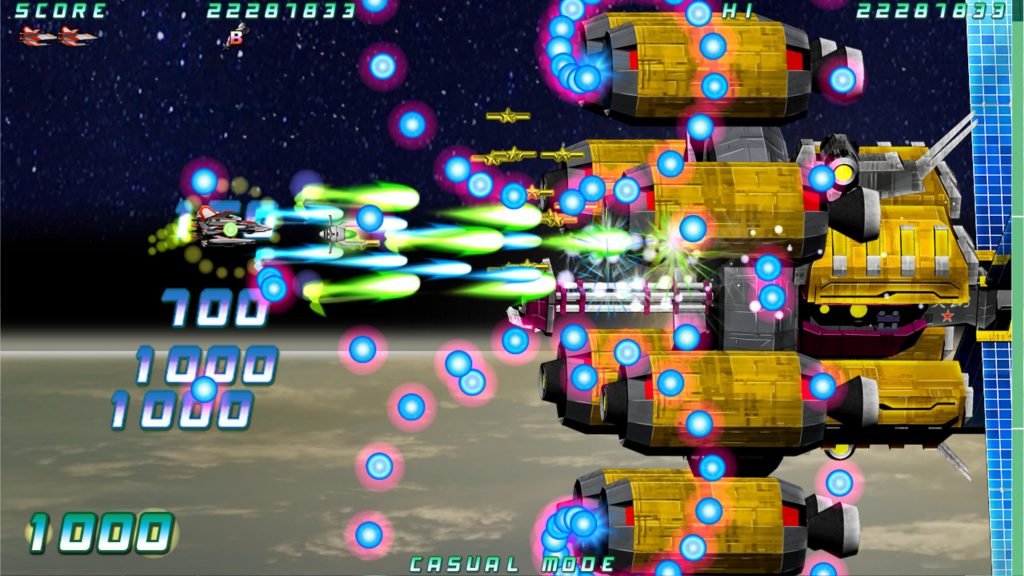 Add to that a smart bomb mode which has three uses but if you’re hit, the bomb will be set off but will use up your entire stock.  It’s good in that it’s essentially an extra life but it comes with consequences.  And you’ve also your power up mode which will turn all enemy bullets into medals (which give you points).  During this mode you also get access to a ‘Limiter Break’ which gives you even more power but burns out pretty quickly.

This system all plays into the game’s scoring system where enemies drop larger medals when you’re in power up and Limiter Break modes.  You also get larger medals if you use the slightly weaker Fighter firing mode as opposed to the Gunner one.  There’s a ton of subtlety to all of this and there’s a lot to take in but it all plays into the ‘easy to play, hard to master’ gameplay.

If we had any niggles about the original mode, it’s that your gun pod’s movement is a little bit of a faff to control what with it essentially aiming in the opposite direction to where you move.  It works but it takes away from the focus you need to really score highly and survive the game’s trickier moments. 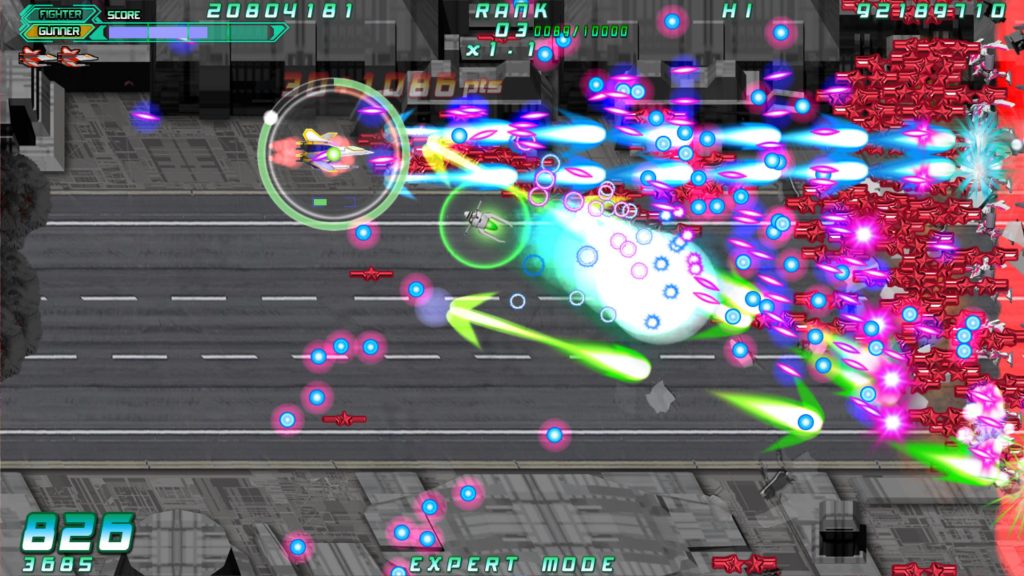 That’s where the Overpower DLC comes into play.  This mode adds some significant improvements that take an already good game over the top.  The first is that it switches the game to a twin-stick control system, allowing you to place the Rolling Gun exactly where you want it.  It’s such a tasty upgrade and it works so well.  We’ve seen this before, the Xbox 360 port of Cave’s Guwange also did this and it made for a vastly improved game and that’s the case here.  Also, aiming shoots too.  We love that.  Fire buttons are not welcome in twin-stick shooters.

You also get an additional attack: the ‘Buster Beam.’  This weapon fires slowly compared to your main weapons but it cancels bullets, making some seemingly impossible bullet patterns survivable.  Again, it’s such a great addition to the gameplay and it can make it tricky to go back to the original mode.  Add to that a colour coding system for medals, a remixed soundtrack and an adaptive ranking system that alters the difficulty of the game as you play and it’s all very transformative considering you’re still playing the same six stages. 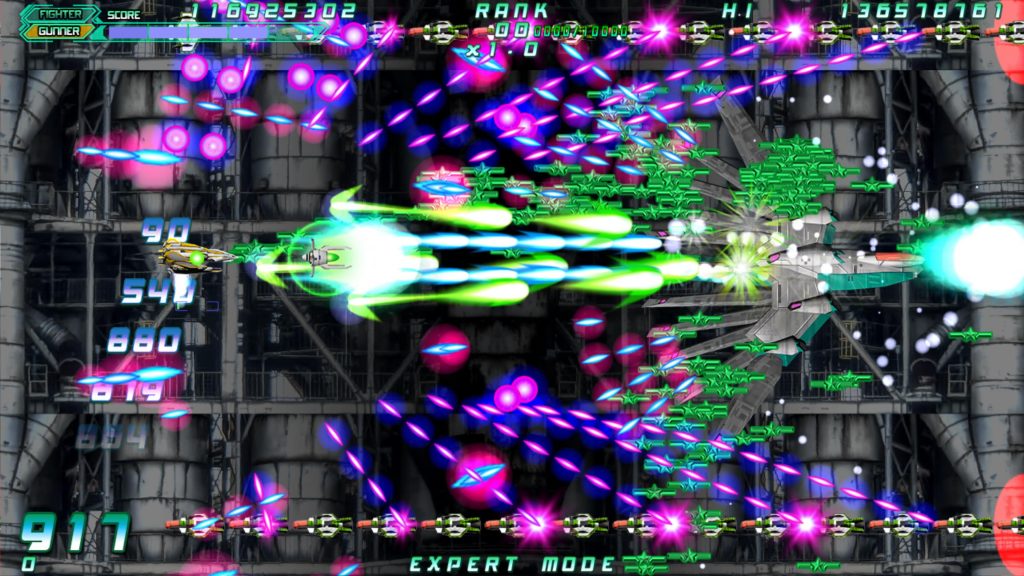 What’s great about Rolling Gunner is that, even though it‘s pretty intimidating and on the hardest settings, it’s quite unlike other shoot ’em ups that demand almost superhuman precision and memorisation. Rolling Gunner is a lot more reasonable thanks to a couple of clever design choices.  Aside from the buster gun, you also get a shield (in Overpower mode).  Initially set to allow three hits, this shield gets a couple of upgrades during the game and slowly recharges too.  It makes life a lot more bearable and lets you concentrate a bit more on score chasing.

We LOVE it when games do that.  We’re reminded of the sensation Xbox 360 shoot ’em up Omega Five which was quite easy to complete but a beast to master.  That’s the story here.  Rolling Gunner throws so much at you but gives you everything you need to fight back while trying to maximise your score and you’ll definitely get months of fun out of this if you try to really push for the highest scores. 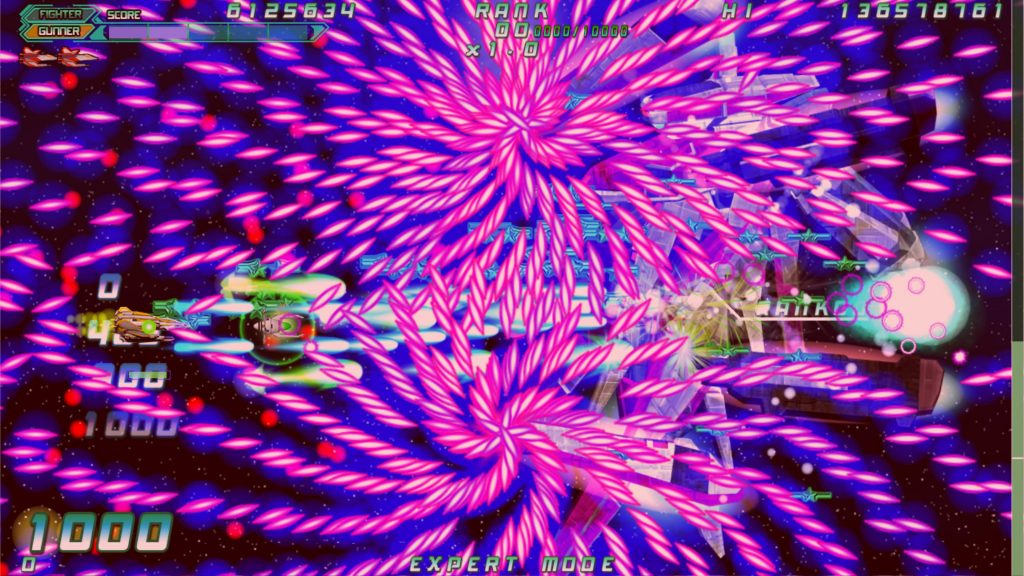 The game’s presentation is done well too.  While the backdrops lack a bit of sophistication, looking a little like some of R-Type Final 2‘s bland stages at times, that doesn’t matter given just how well they’ve balanced absolute chaos with actual clarity.  It can take a bit of effort to tune it all out and just focus on your green hitbox while the screen explodes in enemy bullets but somehow you see your way through it.  It’s some of the best visual design we’ve seen in a shoot ’em up.  A raucous ’90s style soundtrack also evokes some serious arcade memories too.  It’s arguably a bit much, like a Sega soundtrack from the same period, but it certainly adds to the excitement.

So overall we’re incredibly happy with Rolling Gunner.  The original mode would have likely scored an eight from us but the improved controls and other enhancements from Overpower make this a deserved nine.  If you’re a fan of shoot ’em ups, this one is accessible but full of depth.  If you’re new to the genre, don’t be put off by the mad screenshots.  An infinite continue system allows you to see the whole game (albeit at a cost to any leaderboard ambitions you might have) and it’s just a lot of fun to play through the game.

Rolling Gunner Overpower
9 Overall
Pros
+ Improves on an already good game
+ Clever scoring system
+ Exciting, clear visuals
+ Excellent controls
Cons
- Tutorials don't explain everything
- One for shoot 'em up fans only
Summary
Rolling Gunner Overpower is possibly the best shoot 'em up on PSN. If you want a game that looks insane but excels in terms of playability, this is the one.