Amazing Princess Sarah came out quite a long time ago on other platforms and has now landed on PS4. It’s a retro style 2D platformer with a few interesting ideas.

You play as Princess Sarah, who must save the King after he is kidnapped by Lilith. This involves platforming through five levels, each filled with enemies and the odd hazard. She can attack enemies with her sword but her best form of offence is to throw things at her enemies. These can be items that are found throughout the level or, more often than not, enemies that she has already defeated. 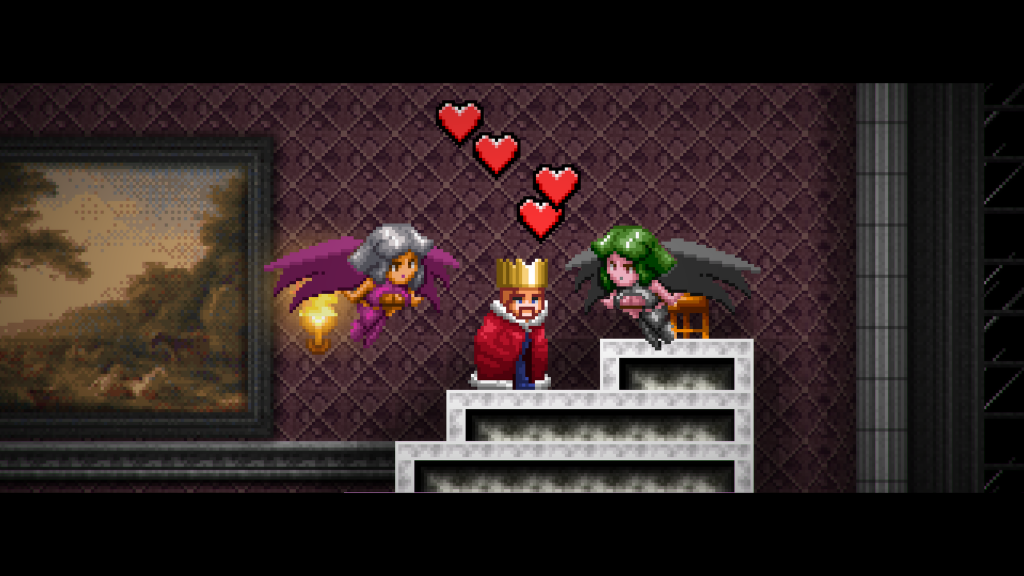 Each item can only be thrown once before it breaks but different enemies have different properties when used as weapons. Zombies will revive if they aren’t thrown, archers explode into a fountain of arrows and fire sprites send a flame out in either direction for example. A weapon is a weapon but it’s nice to have something else to think about other than which enemies are ahead of you and which direction you’re going.

The levels themselves are pretty straightforward. You’ll follow the level as it winds up, down, left and right and eventually you’ll reach a switch that will open up a wall that was previously closed and then continue on. You’ll need to jump around, defeat enemies and eventually avoid spikes and bottomless pits but, as I said, it’s pretty straightforward. Each level forms a square map so you’ll always be taking winding paths up or down, left or right until you reach a boss in one of the corners. 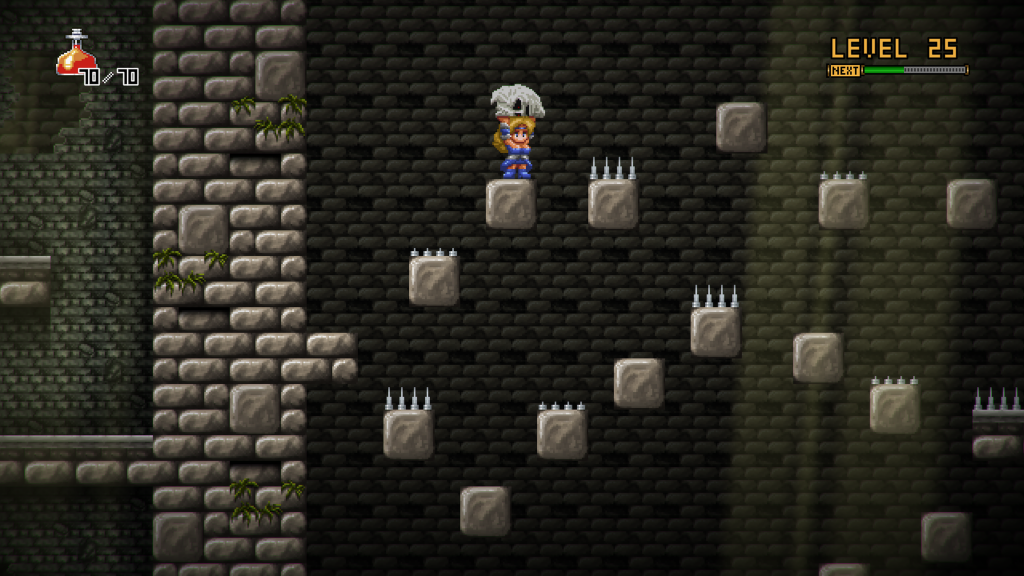 You have health which will drop as you take hits from everything but as you kill enemies you’ll gain experience which will level you up with more health and damage. Things aren’t too difficult and that’s helped by the checkpoints that are littered throughout the levels. These are fairly distributed and give you all your health back as you pass them. If you die or quit out then that’s where you continue from. As each section isn’t overly long you should get to the boss of the level without too much trouble but the entire level itself is on the long side.

Bosses have large health bars and have two or three moves they can attack you with. Avoiding them whilst hitting with your sword or throwing stuff at them is the key to victory as you’d expect. Three of them are quite similar, in that one of their moves is stamping on you. The second boss is more interesting as it chases you up the level and you need to throw enemies down at it. It makes clever use of the game’s unique mechanics which the other bosses don’t so much. 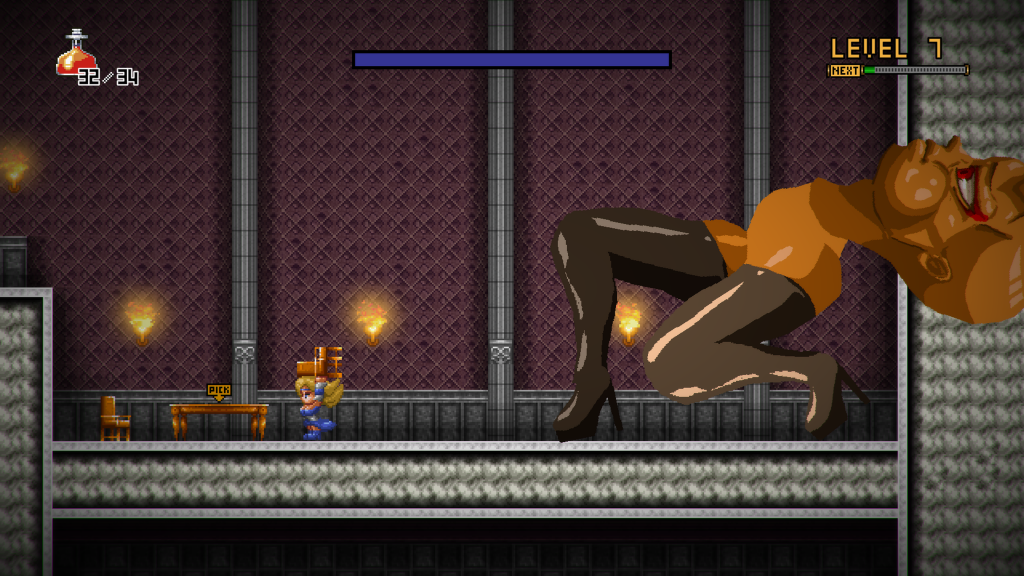 It won’t take you long to beat the five levels, it took me under two hours, but you won’t get access to the final boss just yet. Each time you beat the game you’ll unlock a New Game+ variant to play through. It’s the same levels and you keep your experience level but there is a new gimmick applied and rather being called Amazing Princess Sarah a new adjective is applied like Angry or Drunk. Angry has you being followed around by a ghost that will hurt you if you touch it whilst drunk has the camera constantly swaying. The enemies also get stronger, especially the bosses, and later on you get the ability to double jump which changes things up a bit but you are just playing through the same levels again. These don’t change things up that much.

Each level has a different presentation but it’s not a great looking game. Each element looks like it is from a different game with the character sprites looking okay, then the bosses being large sprites stuck together and the backgrounds being simplistic with some objects being very blurry compared to others. It’s not offensive to look at but it barely has any polish. Music is fine if forgettable. 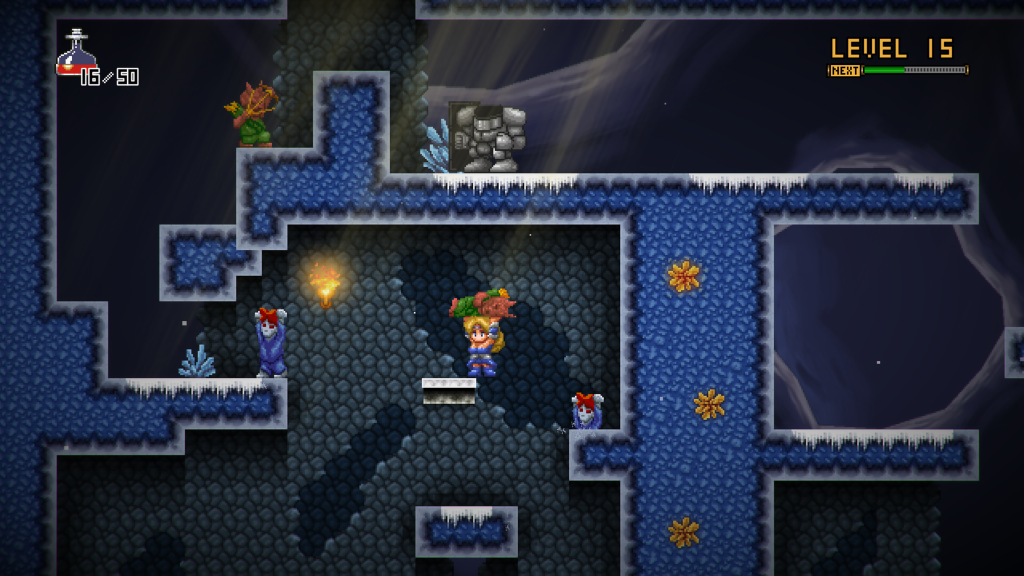 So it’s a short game, but it’s cheap too so that’s not so much of a problem and if you want to beat the final boss then you have to beat the game seven times anyway. There are some interesting ideas here but after my first run through I thought the game was fine if nothing to shout about. The levels aren’t particularly memorable and you’re just going through the platforming motions most of the time. At times it made me think of Cast of the Seven Godsends but this doesn’t feel as thrown together as that so is a little bit of an unfair comparison.

As cool as the idea of New Game+ bringing in new gimmicks is most of them don’t make as much difference to the gameplay as you’d like so it becomes quite repetitive. Following playthroughs are shorter but bosses end up requiring close to perfection to defeat as they can kill you in near enough one hit whilst taking an age to take down themselves. The end boss is also not really worth the effort to reach, it’s one of the simpler bosses in the game as far as mechanics go. 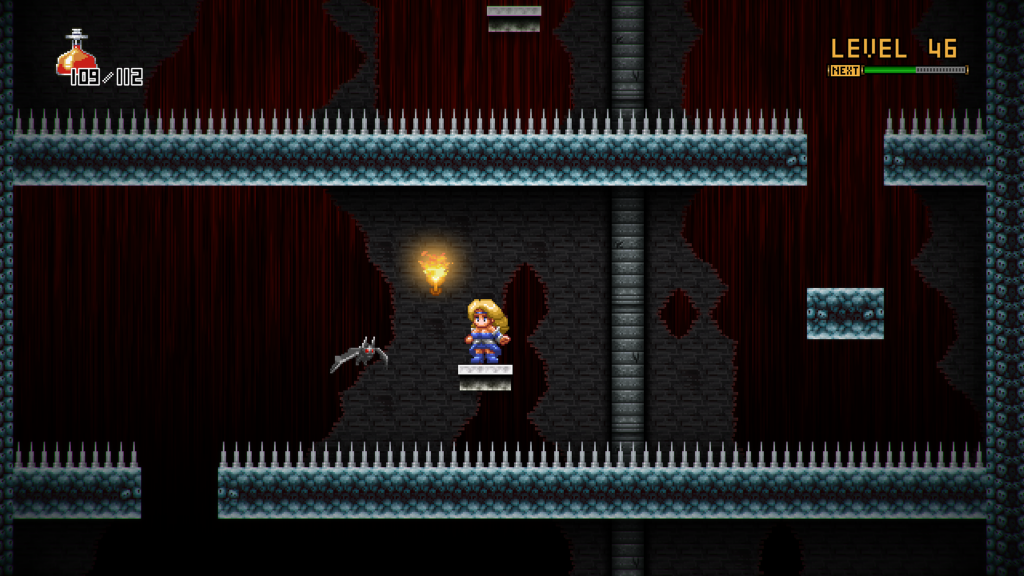 It’s tough to recommend Amazing Princess Sarah. The first playthrough was fine if forgettable and when I saw the idea of changing up subsequent playthroughs I was intrigued but as good an idea as that is it doesn’t change things up enough to stop it being repetitive. If the main reason for going through them is to get to fight the true final boss then it really isn’t worth it. With better level design that might not be the case but it’s so basic, even the first time through, that playing it another six times doesn’t do it any favours.

Amazing Princess Sarah
5 Overall
Pros
+ Throwing mechanic is enjoyable
+ New Game+ variants are a good idea
+ Evenly spaced checkpoints
Cons
- Very basic level design
- Repetitive game structure
- Presentation is poor
- Only one boss is designed around the game mechanics
Summary
Amazing Princess Sarah is a simple and basic action platformer. Throwing the bodies of your enemies at other enemies is a fun mechanic and after beating the game once the gimmicks introduced in subsequent playthroughs are great ideas. Unfortunately the level design isn't that interesting so the game wanting you to play through them over and over again to face the true final boss is asking a lot of the player.