Cotton Fantasy is a shoot ’em up that is part of the celebrated Cotton series which is currently celebrating its 30th anniversary.  We’ve already seen a few ports of some of the other games with Cotton Reboot!, Panorama Cotton and various others all making it to PSN in the last year or so.

This game however isn’t a reboot or port, it’s a legit new game from Success, the original Cotton publishers (along with indie developer Studio Saizensen).  As ever, it’s a primarily horizontally-scrolling shoot ’em up that sits in the very Japanese sub-genre of ‘cute ’em up’ and it sees you playing as the titular Cotton, or one of six other playable characters, as they blast their way through several stages of enemies and giant bosses. 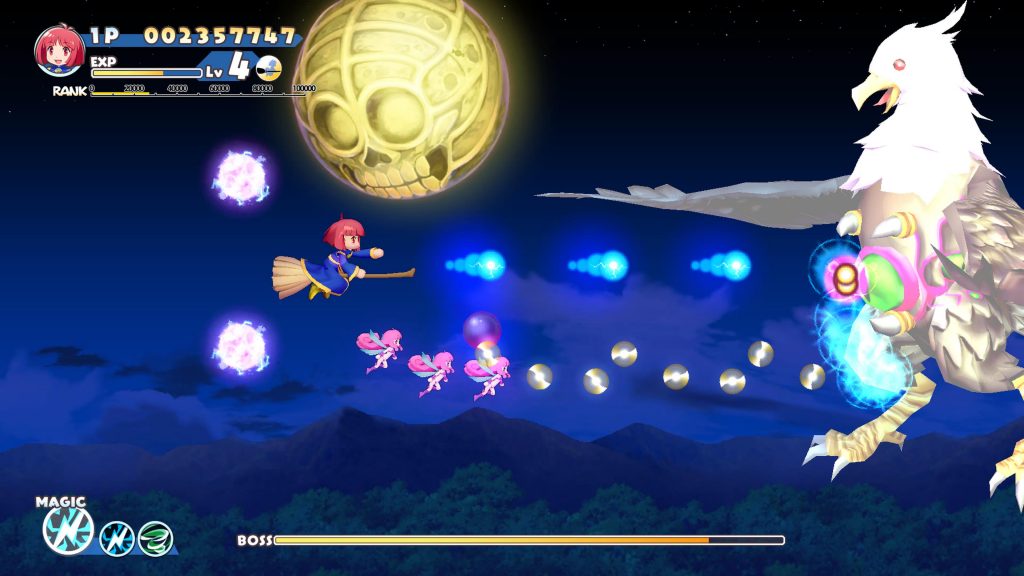 Now our main knock against the Cotton series is that it can all be a bit baffling with various weapon types, different coloured crystals, special meters and other things to consider that aren’t ever particularly well explained and with this game, there’s even more complexity as each character has different game mechanics attached to them.  However, a quick tutorial is available for each character and this clears things up better than the previous games managed to.

Although the levels and story don’t change, each character has a different set up when it comes to the gameplay.  Cotton and Appli play mostly in the standard way, using different coloured gems to switch weapons and upgrade their firepower (a bit like R-Type but just too often!),  Umahara Kawase (guest appearing from the game of the same name) uses a fishing rod to capture and throw enemies, Ria (from Psyvariar) levels up her firepower by grazing enemy bullets, Fine (from Starfighter Sanvein) has a timer instead of lives with damage lowering the timer and successful attacks increasing it and Tacoot has an staff that can be launched forward and has its own firepower (a bit like R-Type).

We’re not sure that the levels suit all characters but it’s really nice to have all these different configurations to play with and what it does is give you some variety.  It’s a bit like what R-Type Final or the recent Dariusburst games have done, changing up some of the gameplay fundamentals based on who you play as and we like that a lot.   Whoever you pick though the game offers several levels of enjoyable shoot ’em up action and it’s all smooth, fast and exciting.  The controls hold up better than any of the previous games for us and this is our favourite in the series to play. 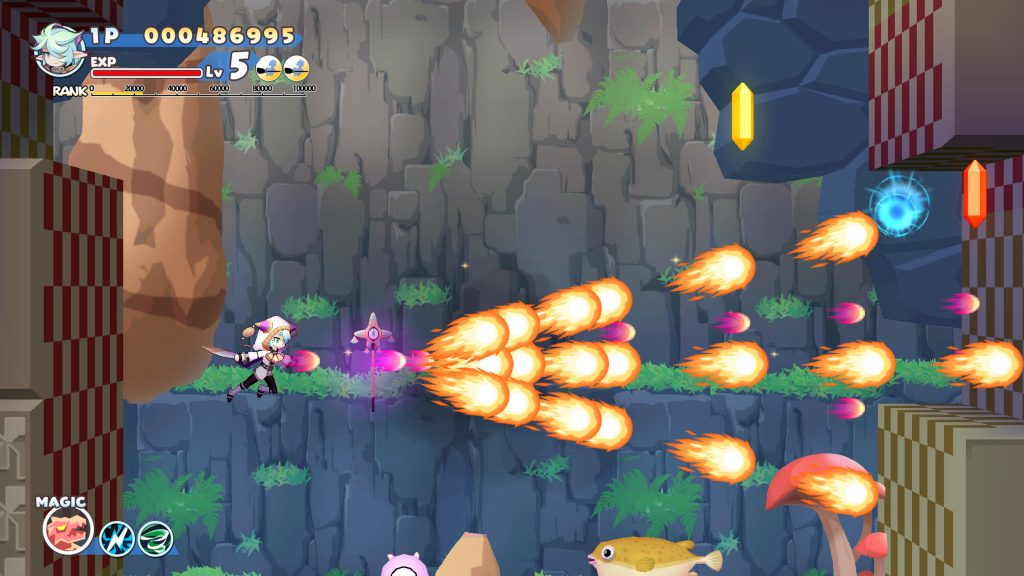 That said, the game can feel a little imprecise with chunky sprites, chunky bullets and not very defined hit boxes so it’s not got that accuracy and precision that you get from a Cave shoot ’em up.  That was particularly apparent when playing as Ria who, as we said, relies on grazing enemy bullets.  Thankfully though there is an option to make hitboxes visible the whole time which does help.  That said, it’s a little faint and there’s a lot going on on-screen so you’ll need to really practice if you want to get good at the game.

Indeed, Cotton Fantasy is quite a tough game even on Easy (the harder difficulties are substantially tougher).  There are eight stages to get through and these start off gently (we weren’t hit at all on stage one on our first go) but do get a lot harder later on.  You can play most of the stages in any order (you get to pick before you start a stage although the game didn’t make it super clear but equally we were being a little dense too) and there are extra stages to unlock with some fan favourite ones from other games in the series being included. 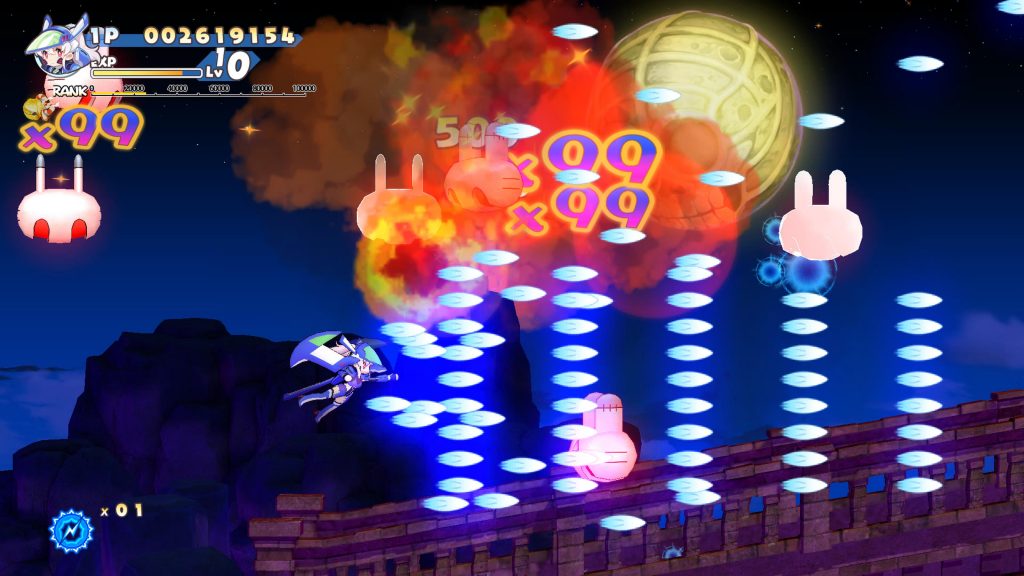 You won’t struggle to see everything though as the game has infinite continues and these are enabled by default, so while score-chasers will need to put the work in, content tourists will happily make it to the end of the game without any skill barriers.  We might have preferred a system where you earn credits, just to encourage better play but it’s okay.

Being a Cotton game, everything is of course dialed right up.  From the intense, hyperactive music to the garishly bright visuals, the game is something of a sugar rush.  The story is presented in Manga-style cutscenes that are exhausting if you’re not into that sort of thing.  Typically Japanese, it’s all seemingly just women who look like kids screaming a lot.  The option to turn of cutscenes is just as welcome as the hitbox option we talked about before.   Also, if you’re into this sort of stuff, it feels like a con that you see the same story each time even though we first picked Cotton to play as and the game told us this story is told from Cotton’s perspective.  It does make you think you’ll get stories for all the other characters. 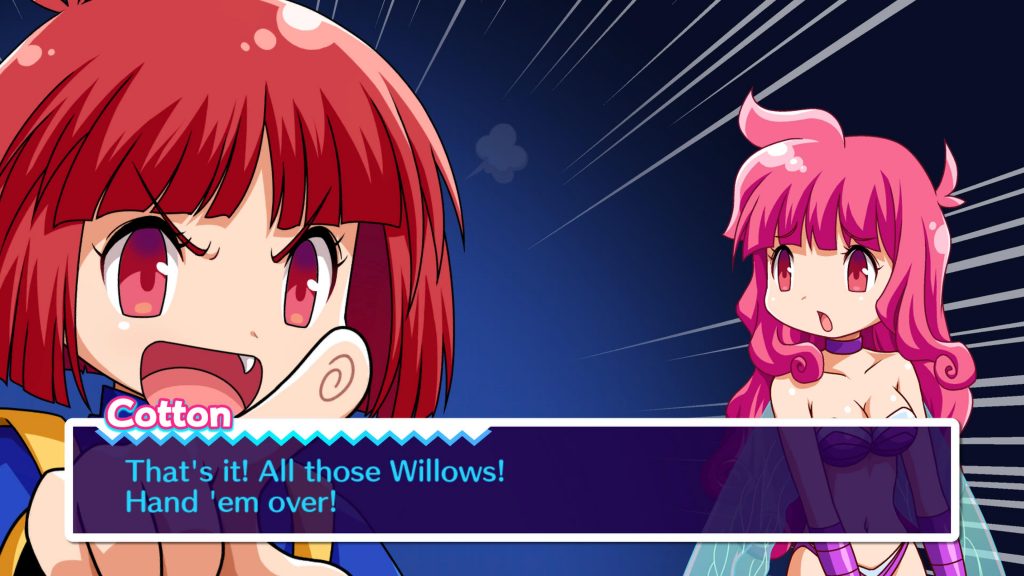 But with loads of fun, playable characters to use and levels to explore, we’ve not got much bad to say about this one.  Sure, the visuals get a little cluttered at times and the constant weapon switching (for some characters) does get a bit annoying too but Cotton Fantasy is just a fun game.  We’d certainly rather play this than R-Type Final 2 for example.  And with some very active leaderboards, you’ve definitely got a good reason to keep going back to the game and that’ll help you to discover all of the intricacies and secrets this game has to offer too.

For us, it’s the best game in the series.  We’d have liked a few more modes (you only get the main story and a training mode) maybe but that’s just us being greedy.  Aside from those few niggles, this is a bit of a banger.  Fans of the series will love it and shoot ’em up enthusiasts will have a blast too.

Cotton Fantasy
8 Overall
Pros
+ Good shoot 'em up action with decent controls
+ Plenty of variation in playing styles
+ Cheery presentation
Cons
- Action isn't always very clear
- Infinite credits unlocked right away
- Music is bit too intense
- The classic Cotton weapon/level system isn't the best
Summary
This modern installment of the classic Cotton series of shoot 'em ups treats the series with respect and does a great job of bringing it up to date whilst also adding some welcome variation.