The deck building Rogue-lite has some strong representatives. Slay the Spire is probably the best on PlayStation but there are other examples on other platforms and even something like Neoverse is a good time. Roguebook is in a similar vein but has enough twists to make it stand out. 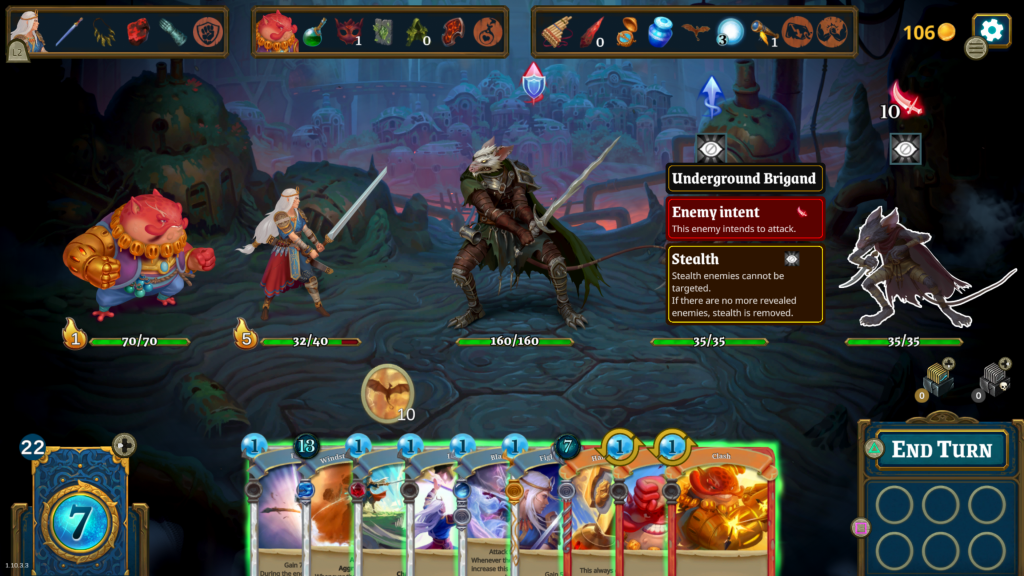 You initially control Sharra and Sorocco, as they wake up within the titular Roguebook. Being a deck building Rogue-lite the story isn’t important in the slightest, but you must travel through three stages, defeating the boss of each in order to complete a run. I say complete a run as, players of similar titles will know, beating a run is not the same as beating the game but I’ll get to that later.

Each stage is made up of hexagonal tiles for you to explore, but the book is primarily blank. Not completely, you’ll have a basic path to the boss with certain interactive elements on the way but most of the screen will be empty. Here is where inks and brushes come into play. You can use these to reveal other areas in the procedurally generated stages and find special tiles to hopefully make you stronger and prepare you for the boss and the following stage. 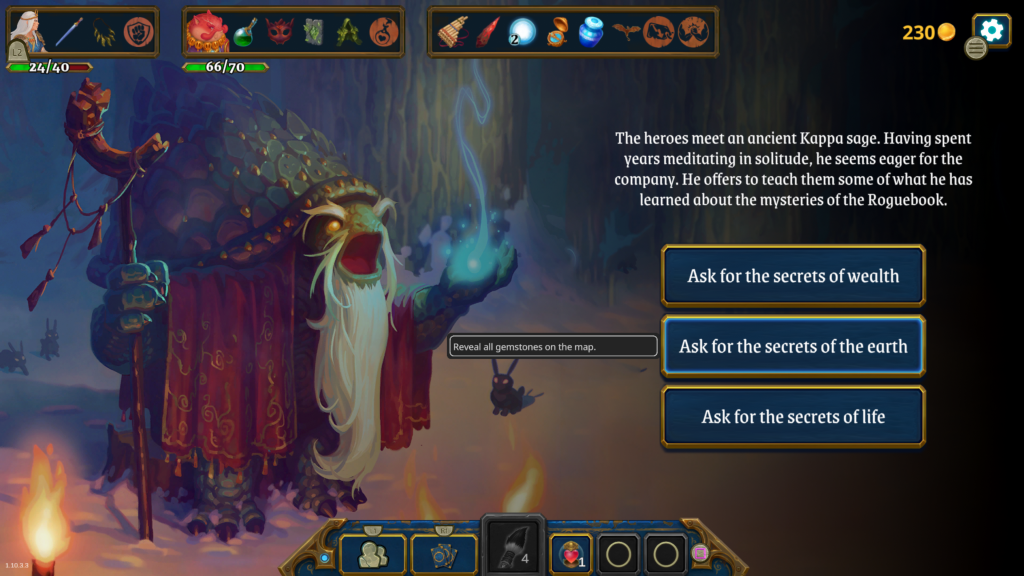 Brushes reveal a large area around you whilst inks come in various forms, letting you reveal a line of tiles or individuals. There are some revealed tiles to aim for but in general you’ll be revealing tiles not knowing what is on them so you may get lucky or you may not. Gold will let you buy items in shops, health potions will heal you up, events will give you a choice to make to hopefully gain a powerful item from and then there are fights.

Fights come in normal and elite forms. Normal fights reward you with gold and ink whilst elites are much tougher but give you brushes, a treasure which gives a character a permanent buff and a gem which can be used to improve a card. As with most deck builders you’re given all the information you need to make your decisions, with simple maths and a bit of luck needed to get through safely. 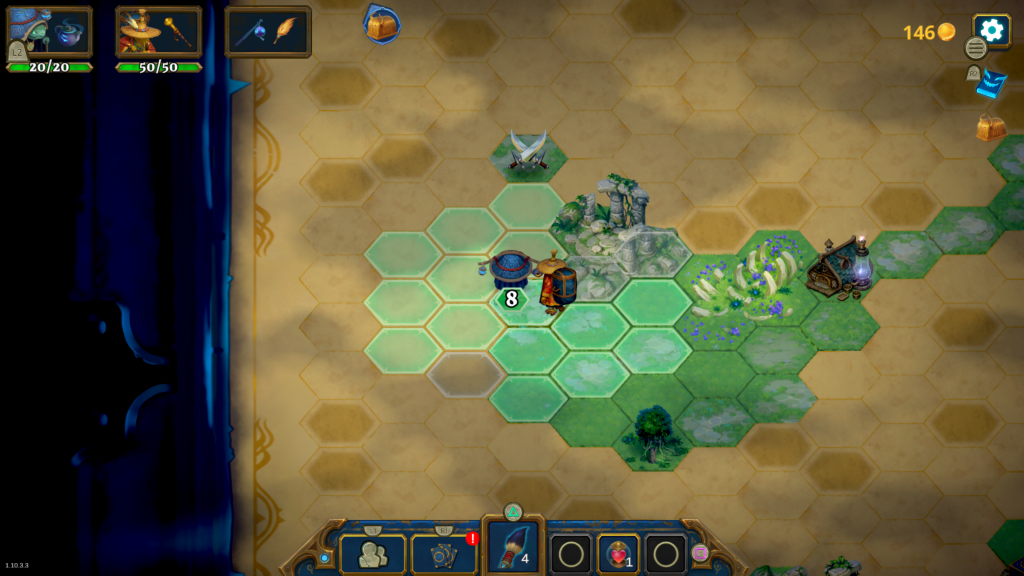 Cards are what you use to battle which won’t come as a surprise to most, but you have two characters which adds a couple of mechanics to the mix. Each character has their own set of unique cards and at the start of each round you draw from a combined deck to fill your hand. At its most basic there are attack and defend cards, but there are also cards for buffing, debuffing and more powerful cards that cost more energy to use. Roguebook is very happy with you hoarding cards too, a risky tactic in other games, and even rewards you for it with bonuses. Also of importance is positioning, with certain cards switching which character is in the front and the back with traits and cards playing into this.

This two character approach is what differentiates the combat from similar titles I’ve played. Each run your build will be different depending on what cards and treasure the game grants you and so sometimes you’ll want to keep things basic and have Sorocco in front at the end of a turn tanking all the damage as his health pool is high, switching Sharra to the front as that’s where she deals most damage when safe to do so. Other times you’ll gain bonuses for every time you switch position so you’ll jump back and forth, whilst still limiting the damage you take of course. 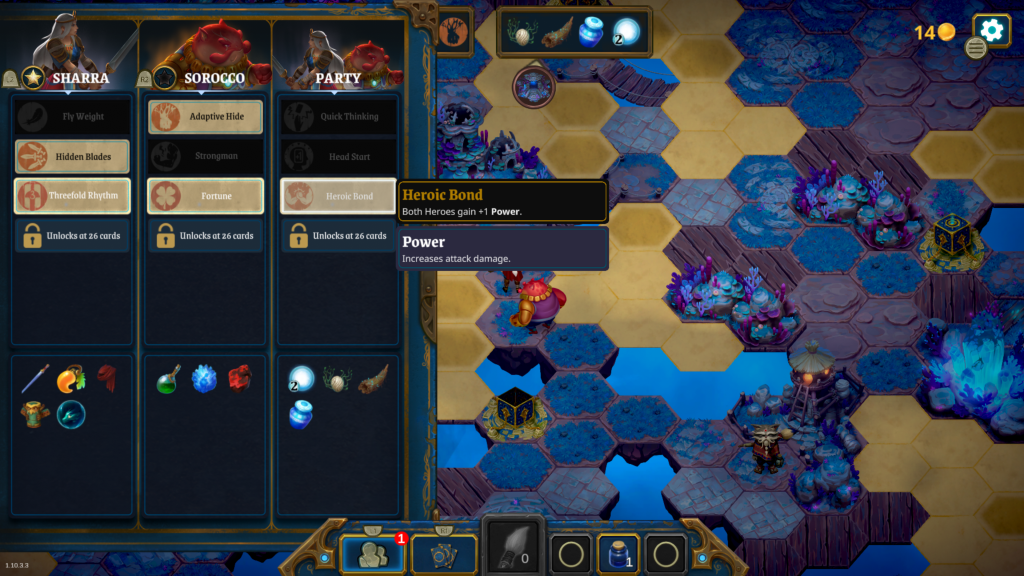 It’s these differences in each run that’ll keep you coming back to Roguebook. Beating a run isn’t the most challenging thing in the world, though a little luck goes a long way, but the game opens up the more you play it. There are two more characters to unlock (and another available as DLC), each with their own set of cards and play style so you can mix and match pairs. During runs you’ll earn pages which can be spent before a new run to give you advantages like more health, higher chances of rarer cards or more health pick ups and chances to find events that increase your energy and more. You can even disable the bonuses after you’ve bought them if you want. It’ll take a lot of pages to max out everything and that’s where the Epilogue comes in.

Once you’ve beaten one run you unlock the ability to apply modifiers from the Epilogue which make things more difficult but give you more pages if you do well. There are three categories of modifier so you can make the combat more difficult, limit the money you have or make exploring the map a bit more challenging. Initially you can only apply one modifier but complete a run with it active and you can start applying more and so on. It also gives you more pages if you complete that modifier with a new character to incentivise experimentation even more so. That’s on top of characters just gaining experience as you use them to unlock new cards and an overall party experience which unlocks new treasures. 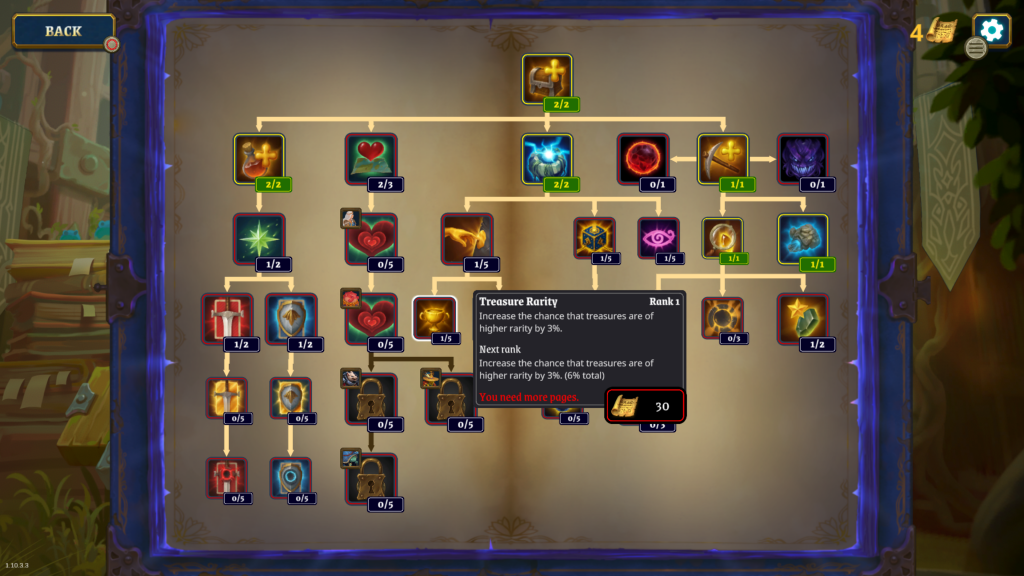 It’s a very enjoyable experience, but it’s not perfect. The controls haven’t transferred to controller that well unfortunately, worse than others I’ve played. This is in part due to poor explanations (I don’t think it says anywhere that you can preview your brush use by pressing circle for example) and some poor choices in combat. In what is effectively a menu based interface you’d think using the dpad would be the logical choice rather than using an analogue stick for digital movements but instead the different directions on the dpad are used for shortcuts to view your various piles (draw, discarded and dissolved). The thing is if you press left you will move left a card as well, but it’ll open the menu on top of that. It’s very strange but you do get used to using the analogue stick, it’s just not ideal and a rethink of the shortcuts would be appreciated.

Other than that it’s a pretty polished product. The 2D artwork is better than Slay the Spire‘s and although Neoverse was 3D I always found the graphics to be uninspired. Roguebook looks very nice with minor animations for each character and enemy. I’d like a little more enemy variety as you’ll see the same ones in pretty much the same order every run and the environments are similarly predictable but they’re very pleasant to look at. The music is decent, never getting repetitive during those longer tactical battles. 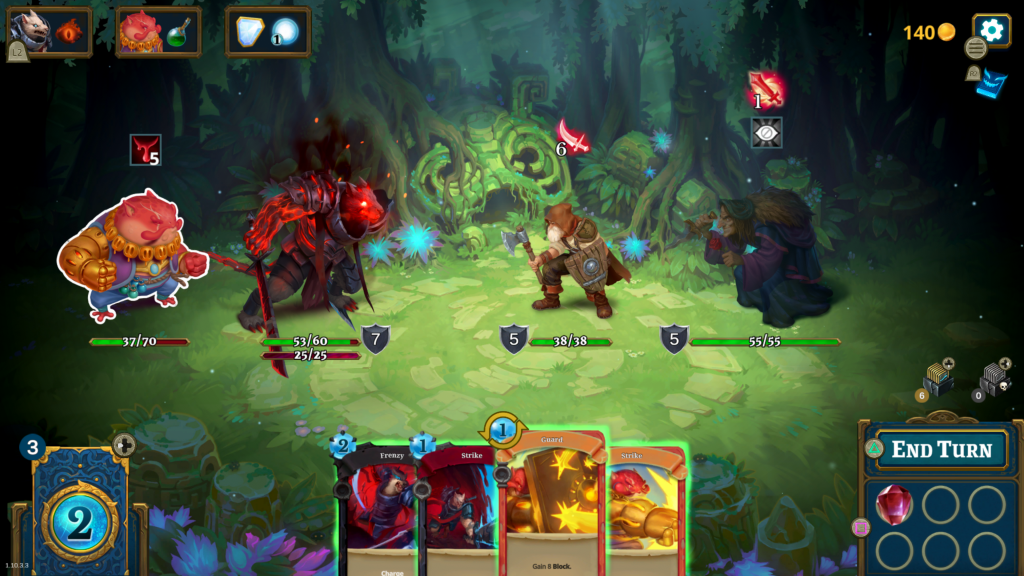 Roguebook is another enjoyable deck building Rogue-lite to add to an ever growing list. Its focus on two character team combat rather than a solo hero makes it stand out and the initial softer difficulty should make it more inviting than the sometimes punishing Slay the Spire, with difficulty options available for the more experienced. Even whilst writing this review I’ve turned on the game to check something out and ended up doing an entire run, a couple of times. That’s a sign of a fun and addictive game that you’ll keep going back to for the foreseeable and for this type of game there’s no better compliment.

Cons
- Fiddly controls in battle
- Enemy and environment variety is low
- PS5 version costs more for some reason
Summary
Roguebook's two character combat adds enough to the gameplay and replayability to help it stand out. The lower initial difficulty will please those that were scared off by the amazing Slay the Spire but with enough modifiers to please veterans. Well worth a look.