I really, really liked Slay the Spire. I’m not one for card games and I’ve only semi-recently come around to Rogue-likes but the challenge offered combined with the learning curve and depth really struck a chord. Neoverse is very similar in concept but has some nifty ideas of its own that make it worth a look. 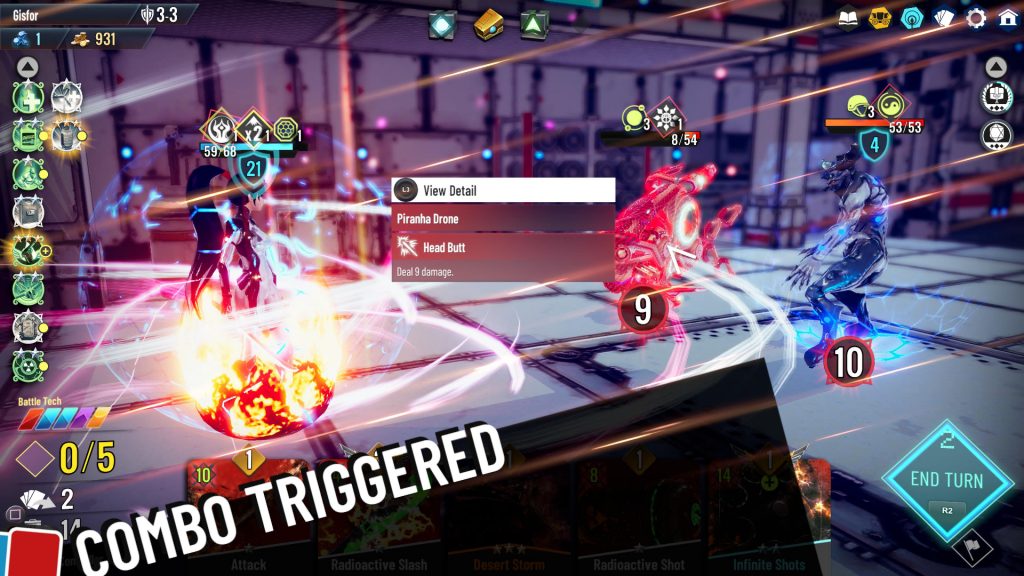 There is a slight story which scrolls on the main menu. Something about humans discovering multiple universes and breaking time and space that they call the Neoverse. It’s really not important. Much like Slay the Spire its all just an excuse for combat scenarios.

The combat is turn based with you having a set amount of mana and a deck of cards representing actions, each costing a certain amount of mana to cast. These will, at the basic level, be attack or defend cards allowing you to cause a specific amount of damage to an enemy or generate a set amount of armour to defend against attacks with. Although there is only one initially there are three characters to choose from, each having their own styles but also multiple decks to choose from.

There’s Agent Maya who can focus on shooting which generates overheat which you need to manage or you can cause radioactivity for damage over time. There’s Paladin Claire who can use faith and punishment to heal and retaliate respectively or can use vampiric powers to steal life. Finally there’s Summoner Helena who can summon one of three guardian animals in either an offensive or defensive deck. Each character can also have a hybrid deck to mix the two and once you’ve played with them enough then you can unlock a Daily Deck which is a set deck to challenge yourself with. 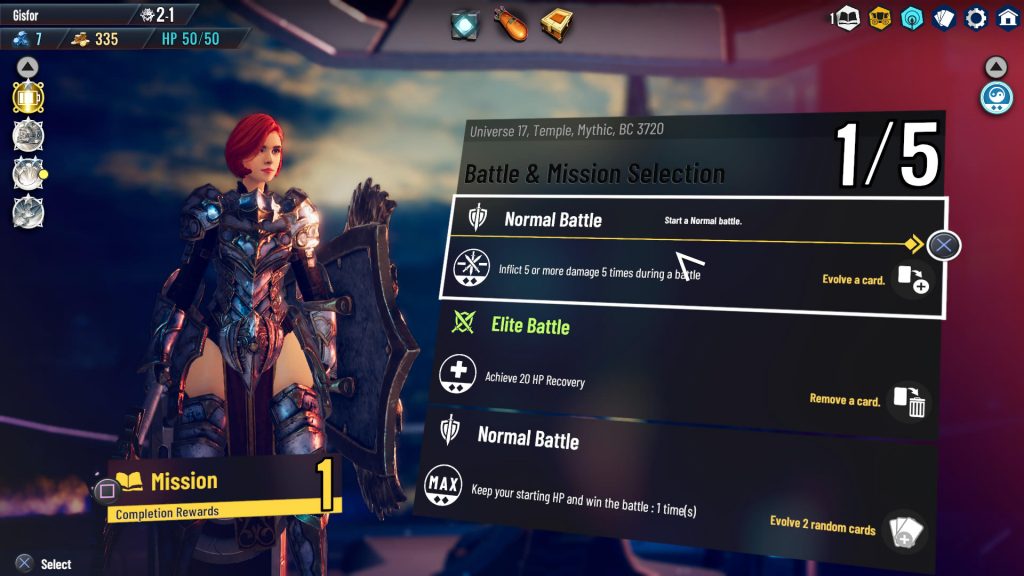 Decks start off relatively straight forward, not including each character’s own quirks, but as you progress you can receive new cards of different types which can apply buffs, either temporarily or throughout the fight, debuff enemies or even generate more mana or shuffle your deck.

The default mode is Adventure Mode which has you moving through fifteen stages of increasing difficulty, fail and you have to restart unless you retry at a cost. Each stage offers you three different battles to tackle and you can choose which one depending on the difficulty and what mission they offer up. Missions are only accepted when you choose the fight, you don’t have to complete them in that battle and range from using a certain amount of a card type to buying a set amount of items in the shop or gaining so many skill points. The rewards you get are real game changers from upgrading cards, removing cards (so your deck doesn’t become cumbersome), skill points or healing. It’s a great system that takes some of the randomness out of things. 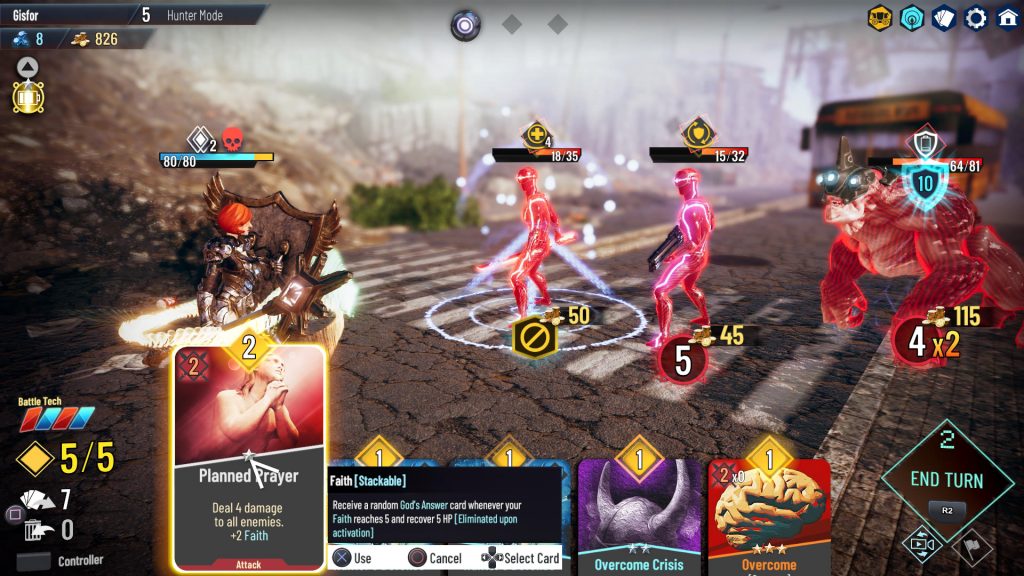 That’s not the only system that differentiates it though. In battles themselves there are combos, precision kills and parries. Precision kills require you to finish off the enemy with the perfect amount of damage to bring their life to zero which rewards you with more money (for use in the shop between battles) and parries are similar in that you have to have the perfect amount of armour to block an attack which will stop the enemy acting the next turn. To achieve a combo at the bottom left of the screen will be a little pattern of coloured cards and you have to use those colours in that order, complete the sequence and your next attack will do double damage. Really important but the cards you draw are random so you may not get the right ones or sometimes breaking the combo will be more important to prevent damage.

Every fifth battle in Adventure mode is a boss and upon completing the entire thing you’ll be able to turn up the difficulty. This is important as I completed my first run with each character first time. The combination of my Slay the Spire experience and the systems put in place that are a lot of fun but can be used to your advantage make Neoverse a far friendlier initiation into this type of game. Having those difficulty options really adds to the longevity. You also gain trophies (not PlayStation Trophies, though you obviously have those as well) which you can use to buy items to change other playthroughs, with one in particular giving access to a ‘true end’. 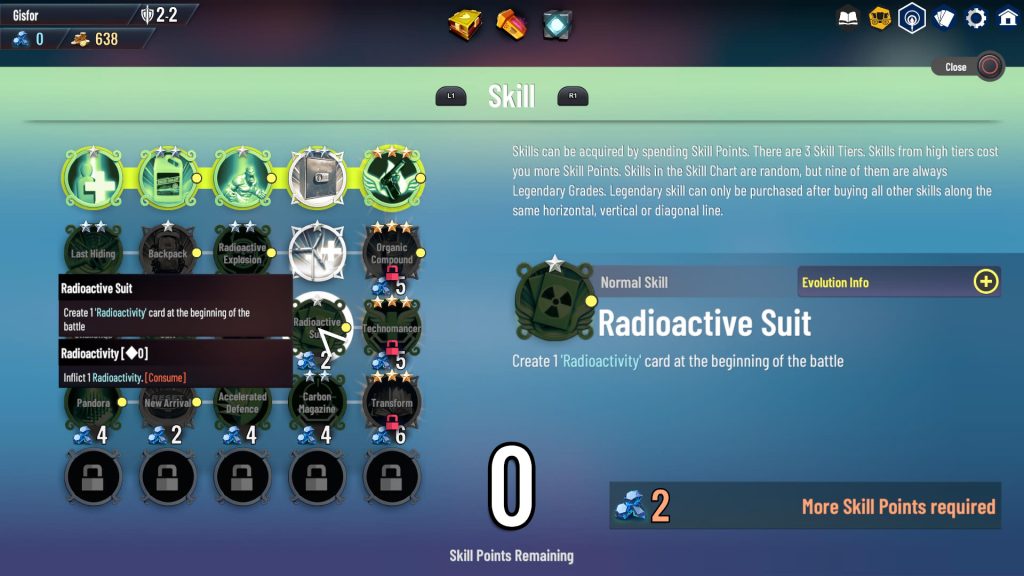 Then there is Hunter Mode which has you playing twenty battles but you can’t choose your path or gain missions. Instead you have specific hunter cards which focus on hitting multiple enemies to start and after every five fights you can visit the Black Market to buy upgrades. The further you get the more bonuses you get for the next playthrough, but only the next playthrough which seems a bit harsh. If I’ve shown I can complete the mode I should have those rewards available to me, with the option to turn them off if I want a pure run.

Finally there’s Challenge Mode which requires you to have saved a deck you’re happy with from a completed Adventure Mode run and costs ten trophies to attempt. This is, as the name suggests, a very challenging mode requiring strong preparation in order to complete. You can unlock new costumes for each of the characters by doing well in each mode as well as unlocking new cards and skills the more you use them.

Each mode has leaderboards associated with it on a per character basis if you’re into score chasing which combined with the characters, modes and difficulties means there’s a lot of content on offer if you get into Neoverse. 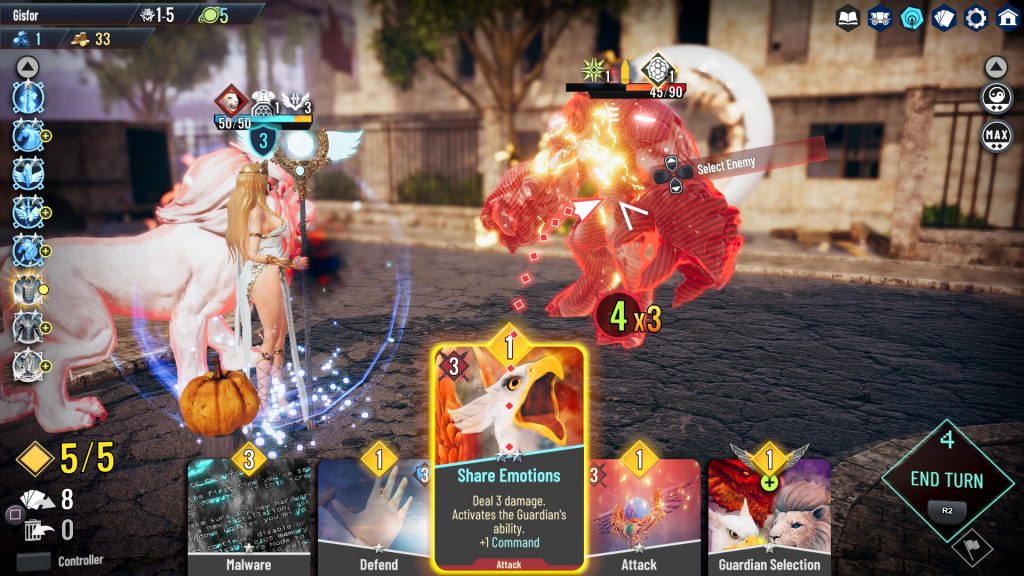 The presentation was one of the weaker aspects of Slay the Spire and Neoverse takes a different direction which some will prefer and some won’t. All the visuals are 3D now and although not amazingly animated are far more impressive than the simple 2D sprites of Slay the Spire. However I’d argue that despite the technical improvements the designs themselves are less interesting. The three main characters each being attractive females with unlockable costumes, including bathing suits, may also rub some people up the right/wrong way.

Controls-wise things are generally pretty good. You can use the d-pad to cycle through your cards and items or you can, at any time, start using the left analogue stick which moves a cursor around like a mouse. It’s a bit slow to play the whole game this way but I found switching between the two depending on what I was doing to be very straight forward. There is the odd occasion where things become unstuck, specifically when looking at your collection of cards. Really you should just be able to use the right stick to scroll the screen but you can either scroll through each card with the d-pad which only works on the way down or you can use the cursor to drag the navigation bar on the side. It’s a little clumsy.

I’d also argue that the tutorial should be a little clearer with the floating bubbles being quite easy to miss and there’s no way to repeat them I can see. There’s also an ‘achievements’ page in the options which doesn’t seem to register what you’ve unlocked, but this hasn’t affected the trophies. 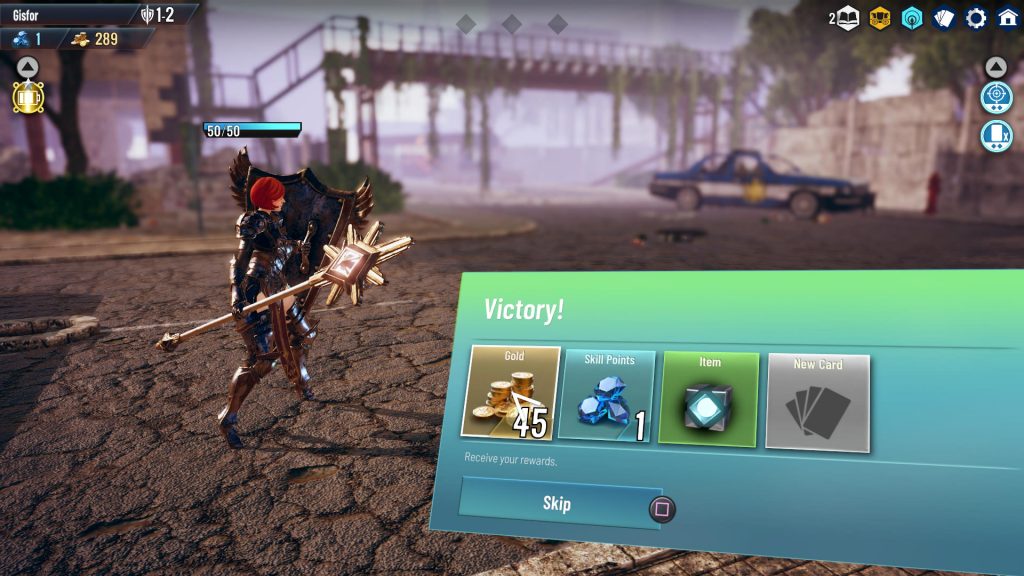 Overall though Neoverse is a very fun game with some super interesting systems in place to differentiate it. Slay the Spire‘s difficulty makes it more intense and more rewarding to me, but Neoverse‘s different modes and unlockables will be enough to keep fans of the genre attempting runs for weeks. If you’re turned off by the challenging nature of Slay the Spire but are interested in the concept then Neoverse is more welcoming and may even act as a gateway to harder titles. Either way it’s definitely worth a look.

Neoverse
8 Overall
Pros
+ Multiple modes and characters
+ Plenty of unlockables
+ Battle and mission systems are a lot of fun
+ Slightly more forgiving than others in the genre
Cons
- Some control quirks
- Tutorial could be clearer
- Aesthetics won't be to everyone's taste
Summary
Neoverse is a very fun, deck building rogue-lite with a few interesting mechanics to differentiate it from the pack. It's a little more forgiving too, but with enough content to keep veterans busy between Slay the Spire runs.