Slay the Spire has been around for a long time on PC, working through early access to balance and improve the gameplay, but now the full version has hit PS4 and fans of challenging roguelikes and turn based card battling are in for a treat. 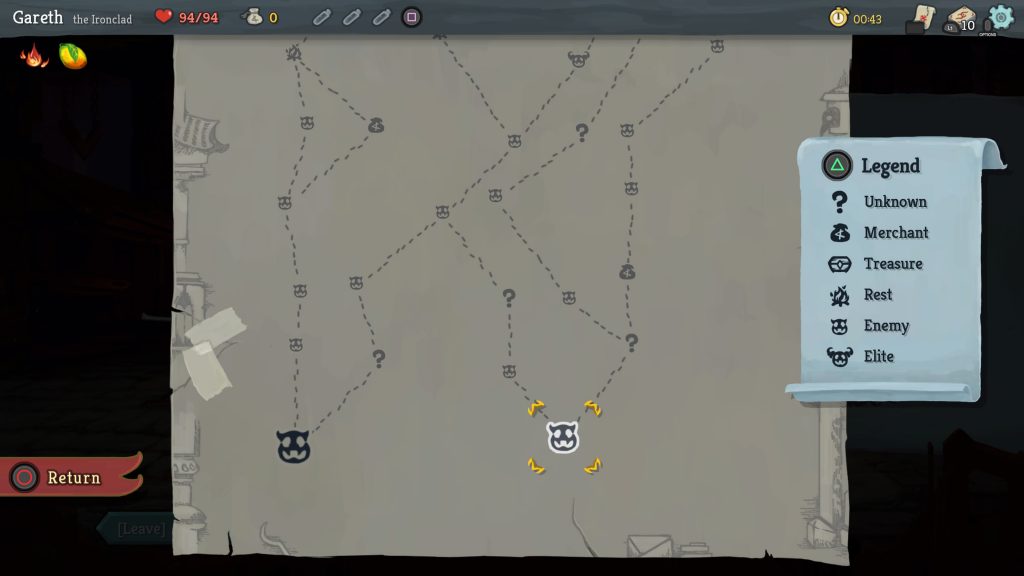 There is no story really, just an objective. Initially you can only choose one class, but ultimately you can unlock three, each having their own deck to play with which will determine your approach. You start off with a basic set of cards and then as you defeat enemies and encounter events you will choose from a random selection of other, hopefully better, cards to start to build out your character into someone who can climb the tower and slay the spire. Different cards synergise well so building in a specific direction will serve you better than just grabbing things randomly. There are plenty of other strategies to consider as well.

As well as cards you have relics. Each character starts with one (which is always the same) but defeating elite enemies or finding chests will grant you another and they can strengthen you greatly or push your strategies in a certain direction. On top of that is the concept of deck control and keeping your deck purposefully small so that you can guarantee that certain cards appear regularly and carry you through battles rather than taking a lot of damage because the right cards didn’t draw at the right time. 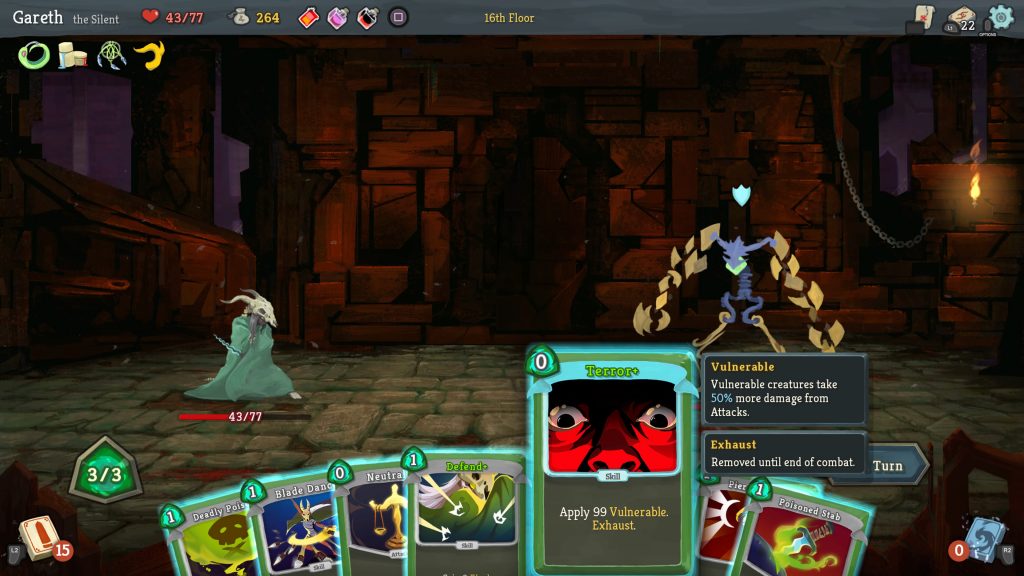 Your bread and butter are simple attack and defend cards. Mitigating the amount of damage you take is incredibly important as healing is in short supply but obviously you need to deal damage to kill the enemy so balancing the two is important. You will quickly come to recognise enemies and they each have their own characteristics which will make them simple or cause major problems depending on your hand. An enemy’s intentions for their next turn are always shown above their head so you have all the information you need to make the best call. You have a limited amount of energy to play cards, each card having an energy cost, so getting the right cards, drawing them in battle and then using them at the right time is the key to success.

I might sound like I know what I’m talking about but I think I’m actually quite bad at Slay the Spire. I clumsily made it about two thirds through the game on my first few runs but, like a fighting game, as I learned more and tried to play it ‘right’ I actually got worse, not making it as far. I knew what I was supposed to do in theory but didn’t have the experience to back it up. Luck also plays a part in the cards you find and draw in battle but the better you are at the game the higher your chances of success will get as you make the right choices with the path you take, card collection and during battles. 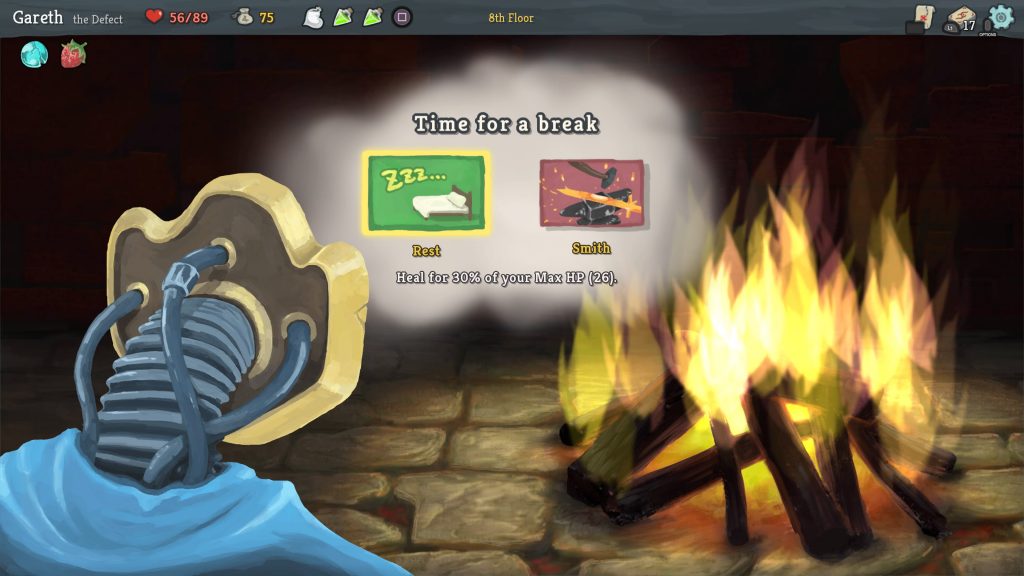 It’s testament to the game, and the controls that are converted well from mouse to controller, that I continue to play and improve at it and have a lot fun doing so. There are new cards to unlock with each character, points you gain from a run eventually levelling you up to unlock them, but that’s the only thing that changes as you play more. Your characters don’t level up so they never become so strong as to make completing a run a certainty, it’s up to you to become better at the game. If you do master it then there are higher difficulties, daily runs to test yourself against other players that impose specific traits on your character and there is a custom mode that lets you set your own rules.

If I was to say anything negative I’d say the graphics are a little amateurish. I don’t mind the art on the cards and the backgrounds are fine but the characters and enemies aren’t great, though they do have simple animation which is appreciated as similar games have just had stationary sprites. The PS4 version also pauses from time to time or slows down as a lot of cards are drawn at the same time or perhaps a lot of effects are happening at once. It’s not game breaking, the turn based nature ensures that, but it sours the experience a tiny amount. I’ve also had some UI elements bug out. 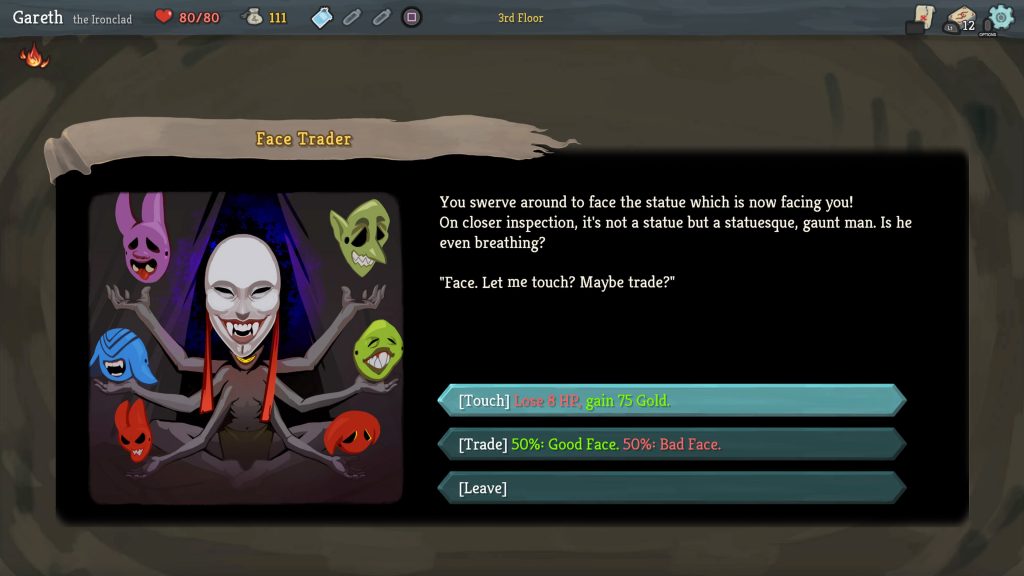 Overall however I think Slay the Spire is superb. It’s incredibly difficult with quite a learning curve but that challenge combined with the amount of card variance which you’ll have no choice but to experience thanks to RNG and the three characters kept me coming back for more and I intend to continue to play it long after this review is done. I hope to one day be confident that when I start a run that I’ll make it through to the end, even on higher difficulties, but there are many more failures in the road ahead for me, and I’ll love every minute.

Slay the Spire
9 Overall
Pros
+ Challenging
+ Addictive gameplay
+ So much to learn
+ A variety of ways to play
Cons
- Visuals are amateurish
- Some performance hiccups
Summary
Slay the Spire is a very difficult but hugely rewarding roguelike built around deck building and card battling. Each failure is a learning experience and the desire to succeed will keep you playing for potentially hundreds of hours.

One thought on “Slay the Spire – PS4 Review”