Brawler’s can come in many shapes and sizes. Born Lucky Games have opted to take a rather interesting approach with Roarr! Jurassic Edition. You’re put in the capable hands of a dinosaur named Sue and tasked with destroying otherworldly invaders but, whilst the premise is interesting, the game lacks more bite. 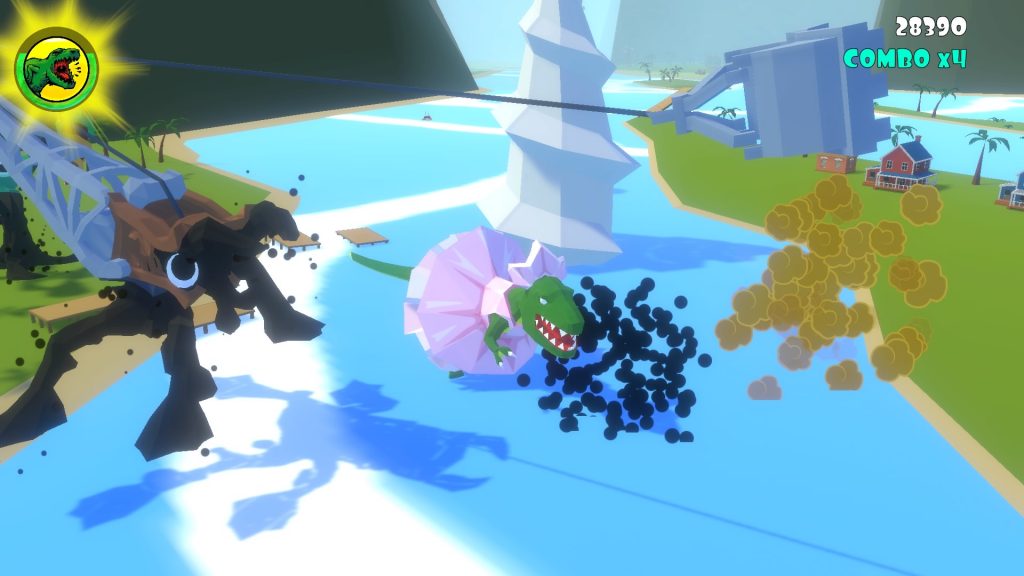 Roarr‘s tale begins with Sue being awoken after 65 million years. She was trying to get some sleep but alien invaders have ruined it. The premise is simple and daft and sets up Sue’s efforts for revenge well enough. There’s very little nuance or twists to come by with scenes introducing a new boss each stage. The narrative takes a firm back seat to the action which Roarr delivers plenty of.

Sue can attack with her body and her arms. You have a dodge roll and jump to evade attacks. She also has a special meter that fills as she destroys objects and deals damage. These special attacks underwhelm in presentation but deal significant damage. They can turn the tide in battle but they just look so flat and unspectacular. 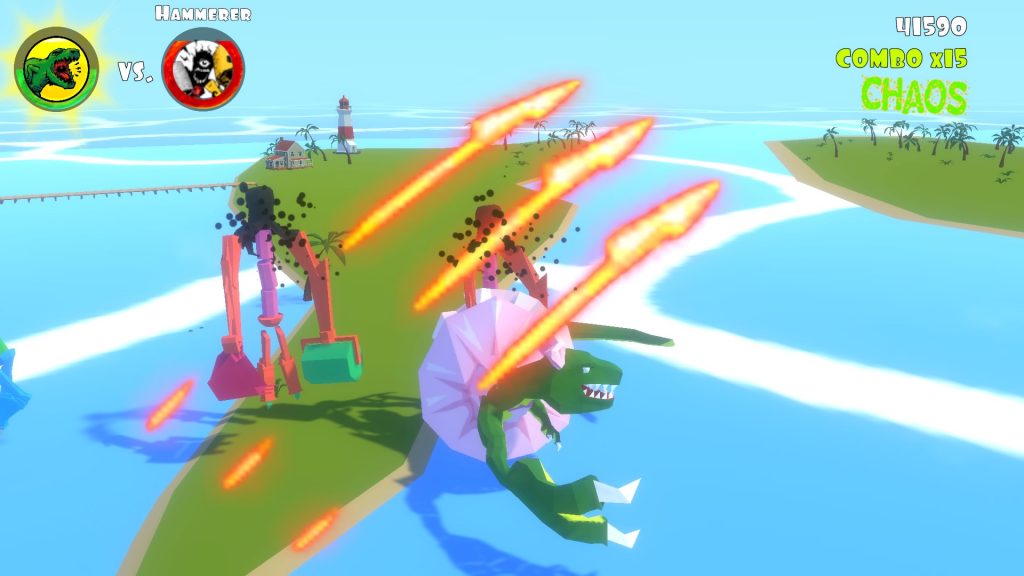 Unfortunately, these simple controls can fail you. During a stage you can almost guarantee to lose one of your button inputs completely. Finding out you can’t jump, attack or dodge mid-stage is terrifying and, to the best of my knowledge, this can’t be rectified quickly. I’ve tried disconnecting and reconnecting controllers but it only seems to solve itself when you move to a new level.

It’s arguably the final straw for a game that’s not all that compelling. When all’s well, it feels kind of brainless and inoffensive, despite lacking depth. Combat can be mashed through and can feel fairly forgiving. Hits for against you just happen with little feedback. I don’t feel much of an impact in battle which can make flurries feel flat.

Combos do at least have a variety to them and Sue can reach a state of mayhem where your counter reaches obscene levels and you can deal some additional damage. On top of that, your special meter increases as more destruction is delivered. This brings with it a tough of strategy when the going gets tough. I usually reserve it for boss arenas because the usual fodder is a cakewalk. Indeed, the game as a whole feels very casual until you reach the final area. The expansive environments become more enclosed and there’s very little space for respite. 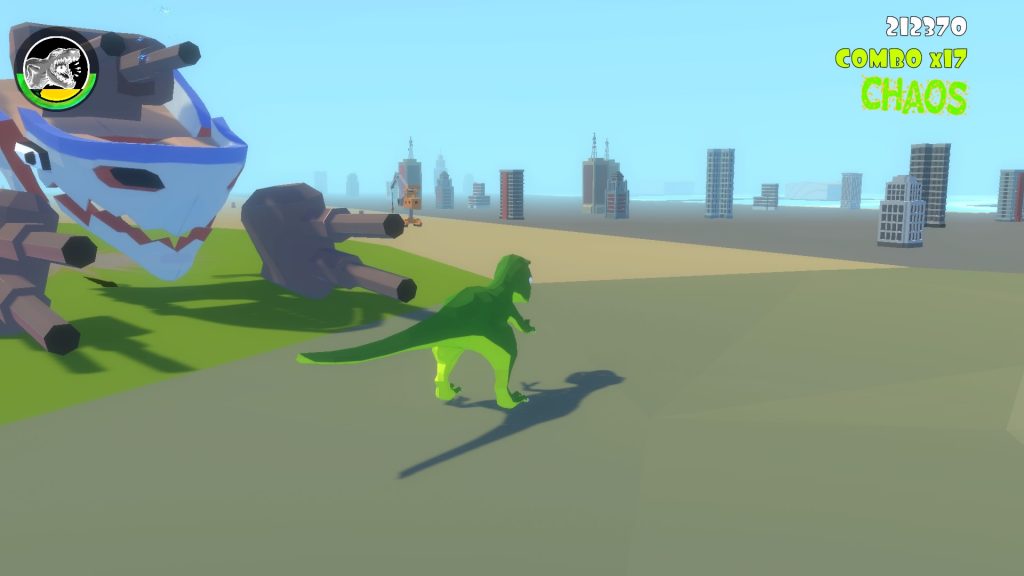 Bosses are damage sponges that seem to die by a thousand cuts. They do telegraph attacks well but some of them also have a fairly accomplished range. Sue, by design, has to get up close to really make some significant gains. It can lead you feeling exposed and reverting to a more cautious approach. Co-op starts to feel valuable in these situations. Up to your players can participate and I imagine many hands can make light work of the tougher tests.

I do like Roarr! Jurassic Edition‘s aesthetics. There’s a colourful, bright appeal to the environments and enemy designs. It’s almost like stepping into a toy box as buildings and trees fold in your wake. Scale’s done very well and you do feel like a monster taking on other giants in a world that otherwise looks very upbeat. It’s accompanied by a rather good soundtrack that compliments the action.

For a world in a crisis, it looks smart and shiny. With the action feeling mostly casual, I’d almost consider this a game for younger players. Unfortunately, the surprisingly tough final area spikes the difficulty somewhat. 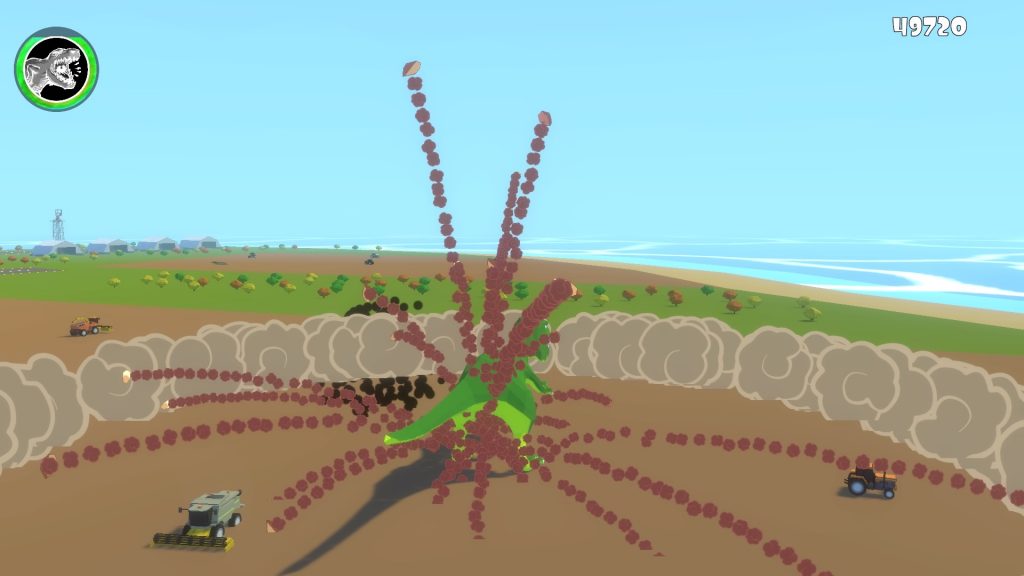 I appreciate Born Lucky Games wanted to evoke the classic brawlers of the past but there’s not enough under the hood to make it compelling. You have a distinct lack of feedback when it comes to combat and it comes away feeling flimsy and a little lifeless. Furthermore, there’s not much beyond the standard mode. You can chase high scores and read up on the enemy types but, beyond that, you’re confined to the same six areas by yourself of with friends.

Roarr! Jurassic Edition’s offerings are a little thin and the core combat lacks options and progression. It begins to feel repetitive and the sharp rise in difficulty towards the final chapter stifles and real sense of flow. On top of that, the intermittent controller issues are a real cause for concern. It could be patched out but, in present trim, it’s always a case of when and not if a button’s going to fail on you.

Roarr! Jurassic Edition
4 Overall
Pros
+ A really bright and colourful aesthetic.
+ Varied enemy designs.
+ An enjoyable soundtrack.
+ A simple and forgiving experience, for the most part.
Cons
- Inputs drop with a worrying regularity.
- Combat feels repetitive and shallow.
- The final area has a steep difficulty spike.
- Overall, a thin package with very little extra content.
Summary
There's a bright and cheery look to Roarr! Jurassic Edition but beyond the surface, it's a little flat. Your moveset doesn't provide a lot of depth and there's not much to look forward to beyond score chasing. Co-op with friends certainly does liven the mood but technical issues like inputs dropping brought more frustration. For all the good the presentation does, the action itself feels a little stale.