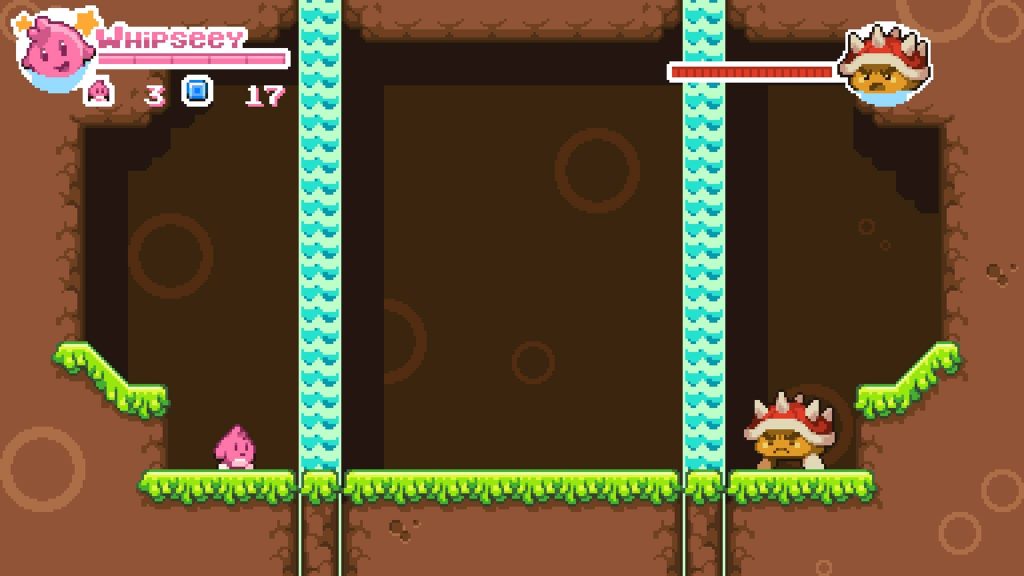 If you have seen any of the promotional material or screenshots from this game, then you would be forgiven in thinking that Whipseey and the Lost Atlas is as close to a Kirby game as possibly can be mustered. From the small, round pink blob of a protagonist, Waddle-Dee style enemy designs, gameplay to the overall aesthetic. If it wasn’t for the sake of some minor differences, I am sure that Hal Labs and Nintendo would be having a very stern word with Blowfish Studios right now.

About the only thing that doesn’t feel lifted from another game is the storyline, albeit the incredibly forgettable and pretty formulaic storyline. You technically play as a kid called Alex, who finds himself teleported and transformed into the world and character of Whipseey. As Whipseey, you must solve the mystery of the Lost Atlas, a completely forgotten McGuffin that never really shows up within the game itself as there is no mystery to speak of. The entirety of the gameplay revolves around 2D platforming and a few boss fights in between. 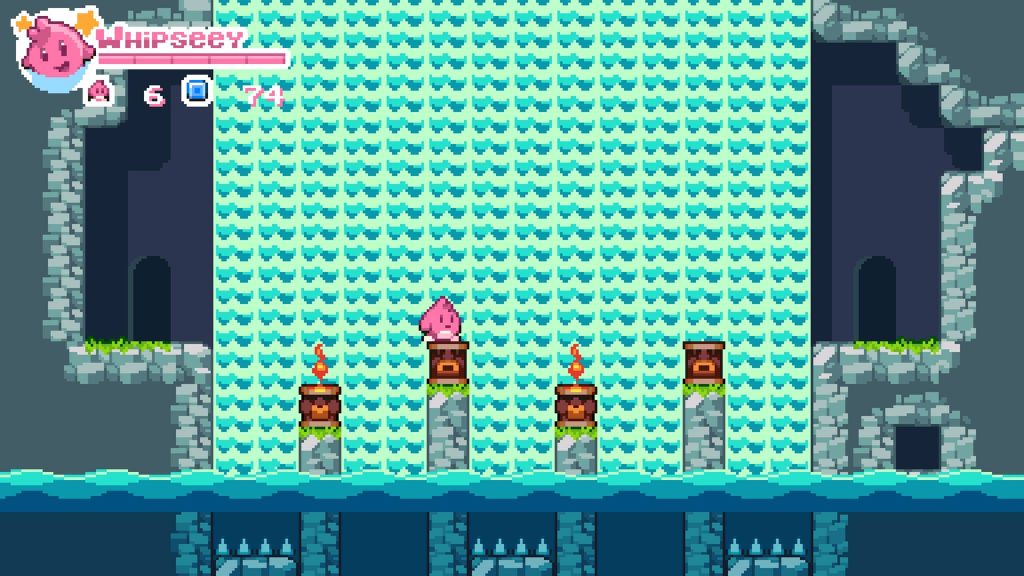 Whereas Kirby had the ability to suck up enemies and copy their abilities, Whipseey instead has a whip to attack enemies with and to aid in traversal. It can hit things and it can allow you to swing on oddly placed hooks around the world in exactly the way you would expect. Whipseey can also glide using the whip as a helicopter to gain some extra distance on a jump or to slow descent, which works nicely when trying to navigate spike caverns, or to slow your demise as you missed an oddly specific pixel perfect jump.

In terms of challenge, Whipseey and the Lost Atlas is an odd one. For the most part, the game is quite a breeze to play. You have five hits to endure against standard enemies and bosses which feels forgiving enough. However, there are moments where the game just loves to dick over the player. Classic Megaman style spikes appear early on and are just as frustrating here as they were in the games. All to easily can they take up Whipseey’s five lives and when they do, the player must navigate the entirety of the level again. These would be fine to a degree to argue that the game has ‘old school challenge’, however, most retro games understood the importance of fairness and invincibility frames. I have not seen a case of taking a hit and then suffering instant death by spike since the original version of Sonic the Hedgehog, a problem that was patched out in later prints because it was unintended and unfair. 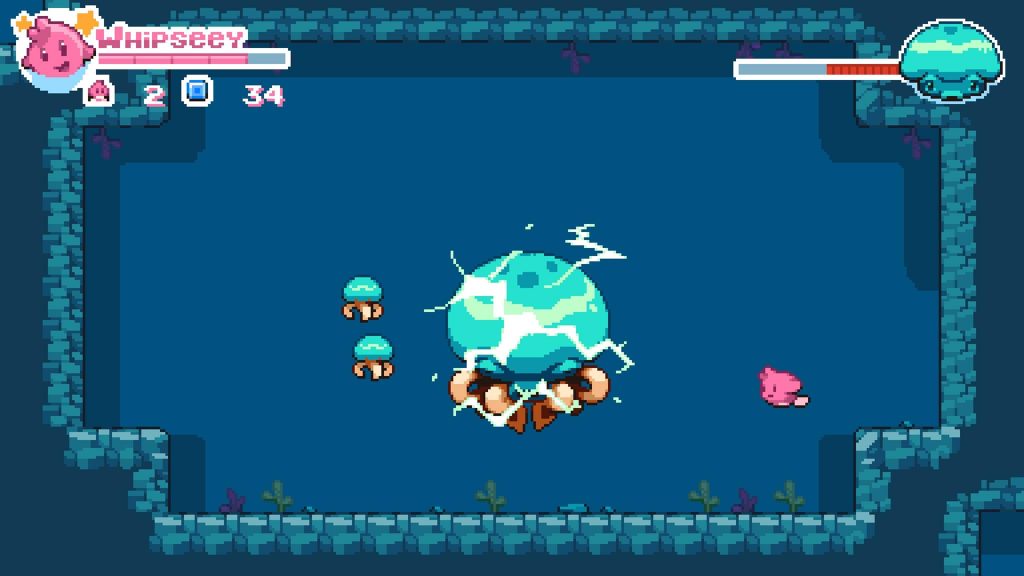 I digress however, It’s clear that the difficulty spikes are there for game length reasons. Whipseey is one of the shortest retro styled platformers that I have seen for some time now. The completion time, despite the unnecessarily frustrating deaths came to less than an hour from booting up the game initially. To my mind, if these instant death pits and spike weren’t there, then this would have probably lasted around half that. For that matter, it makes Whipseey and the Lost Atlas feel incredibly archaic, despite the intention for it to be an homage to 2D platformers of times past.

I have spoken a lot about what Whipseey copies, however, there are some merits to the overall design of Whipseey and the Lost Atlas. Blowfish Studios have enthused the title with some stellar 16-bit aesthetics that pop out from the screen. Character design for both hero and enemies are derivative of various Nintendo franchises sure, but they are well realised and look great on the screen. What tears this apart however is an irksome 30fps which at times makes the game feel somewhat unstable, there is no reason whatsoever for a game like this on the PS4 to feel as slow and juddering as this. 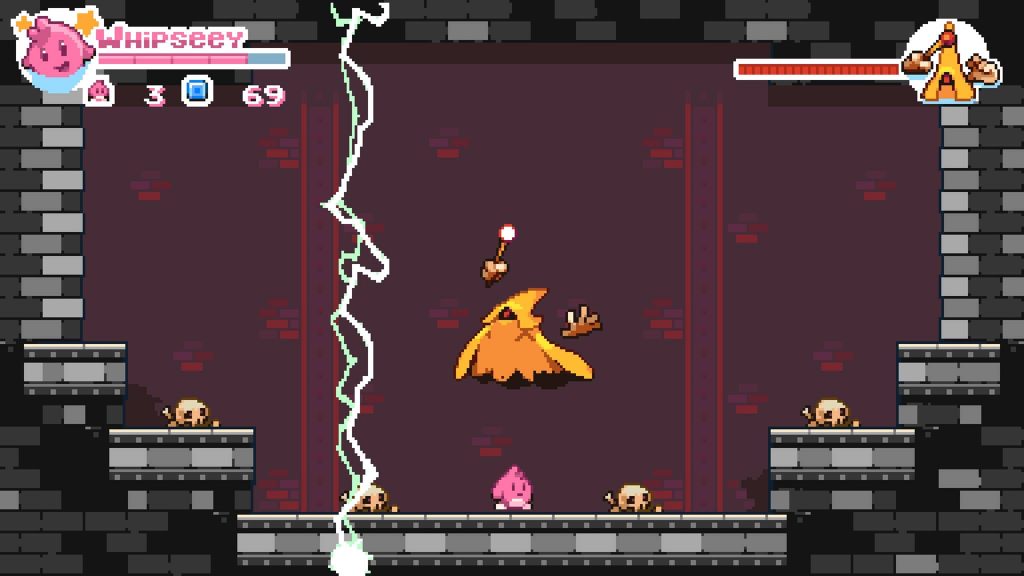 There is a lot I could forgive Whipseey and the Lost Atlas for, as an homage to other games, it may be somewhat blatant, but it isn’t the worst offender and graphically the game is sound. However, there are just too many of these downsides to allow for a higher score. To put it as kindly as possible Whipseey and the Lost Atlas is a capable homage, it just lacks almost everything that the games it pays tribute to has and you would have a far better time simply playing one of those instead.

Whipseey and the Lost Atlas
5 Overall
Pros
+ Plays well, for the most part
+ The soundtrack is inoffensive enough
+ Graphically authentic to the 16-bit era
Cons
- Not nearly as good as the games it clearly takes inspiration from
- Instant death moments which only seem to exist to pad game length
- Takes less than an hour to complete, WITH deaths
Summary
Whipseey and the Lost Atlas tries very hard to emulate some of that Nintendo charm, however, the game is unable to reach that echelon. What results is a short Kirby clone with some merit, yet not enough to warrant anything other than passing interest.