Formerly known, on Steam, as Chernobyl: Road of Death, the recently renamed Road of Death, is a twin-stick shoot ’em up game with survival elements.  It’s a Ratalaika joint, so enjoy your quick Platinum, and developed by Diedemor Studio.

The post-nuclear setting means that you’ll be facing off against irradiated foes using your pistol, rifle or a special class-based weapon in a standard top-down, twin-stick fashion.  Each of the game’s nine levels tasks you with some sort of objective and then a helicopter drops you into a random location on that level’s map. 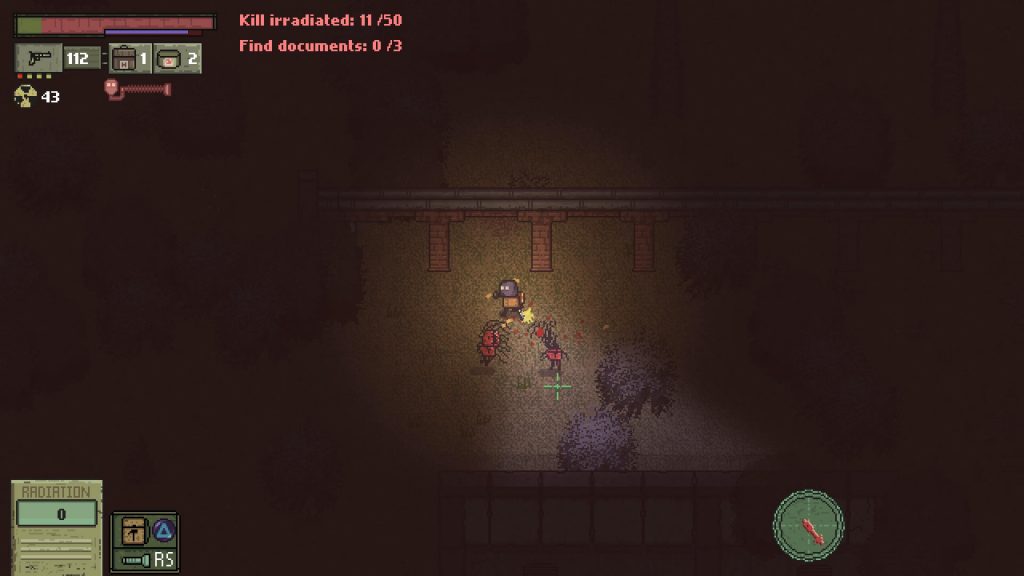 If you try to play this as a straight shoot ’em up though, you’ll die a peasant’s death.  Aside from the controls which aren’t optimal (everything feels a bit clunky), the other things going against you are the speed of the mutants, the weedy weaponry and limited ammo.  Add to that a day/night cycle that can leave you in pitch black with nothing but a shitty pocket torch and you’ll find early progress is hard-going.

It gets worse though, the land is also riddled with radiation that will harm, and ultimately kill, you if you’re not careful.  To that end you are also armed with a water cannon which can clear radiation and give you coins that you can spend on upgrading each bit of your kit once.  This means all your guns, your boots, radiation suit and you can also add an extra medkit. 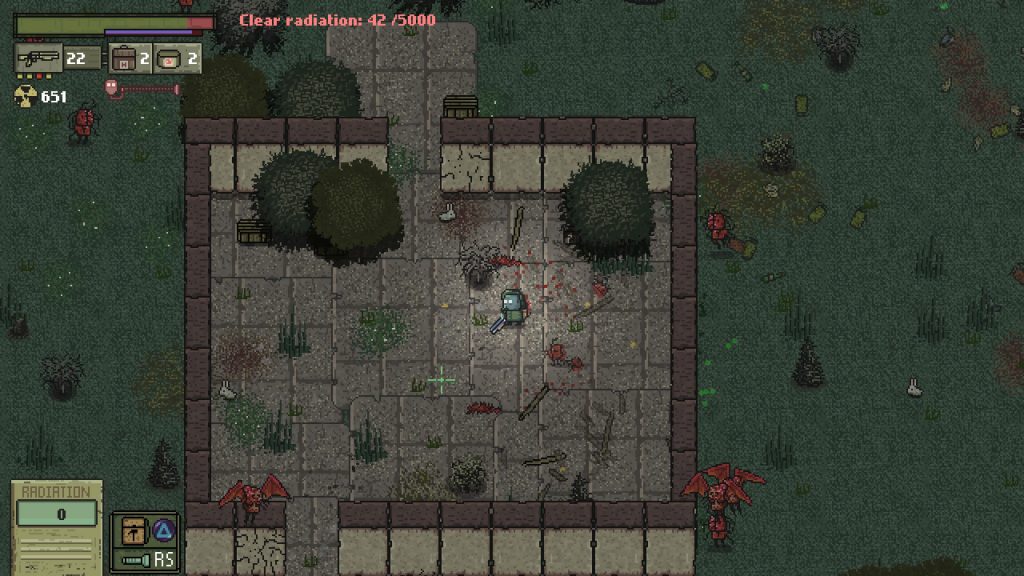 Initially you’ll be shocked that Ratalaika have dropped such a difficult game.  Level two is particularly tricky given that you are dropped into darkness, in range of monsters who will attack you immediately.  The whole place is covered in radiation and you’ve got to go to three separate locations.  It’s brutal.  Brutal enough that we sacked the game off for a day (although the insane heatwave here did also play a part in that decision).

The next day we stirred ourselves back into action and started learning more about the game mechanics and how they can help you survive.  The first thing to know is that you’ve got a tent and if you camp down, you can then use a medkit to heal yourself.  A tutorial explains it but the overall interface is clunky enough that it felt like a faff trying to figure out what the game wanted us to do. 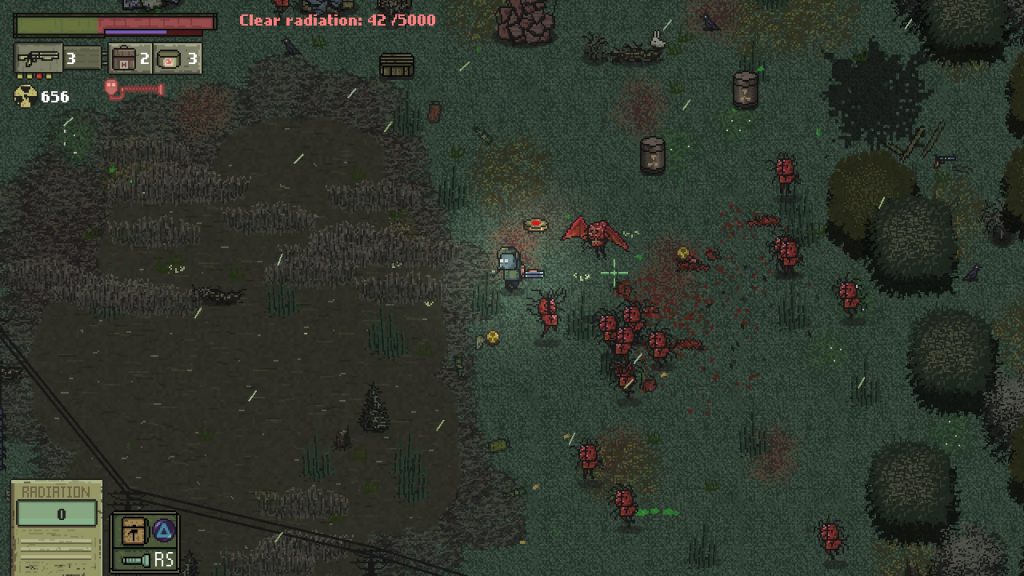 However, this is an important key to surviving the second level.  Use your tent and your medkit and then smash open any cases you find in order to find more medkits and also some ammo.  You also need to know that if you get too irradiated, you need to switch out your mask’s filter.  This is as simple as pressing

but given that you don’t seem to need to find extra filters, it just seems like a fiddly extra mechanic that didn’t need to be there.

You also need to clear out the radiation on the level.  This requires that you to spray areas with a water cannon, which is accessed via the shoulder buttons like all of your weapons.  The problem is that it’s pretty difficult to see what areas are irradiated, especially at night, and again it’s just more extra faff to deal with.  Switching from the water cannon to whatever  weapon still has ammo is just a bit annoying, especially when a super fast mutant is chasing you down. 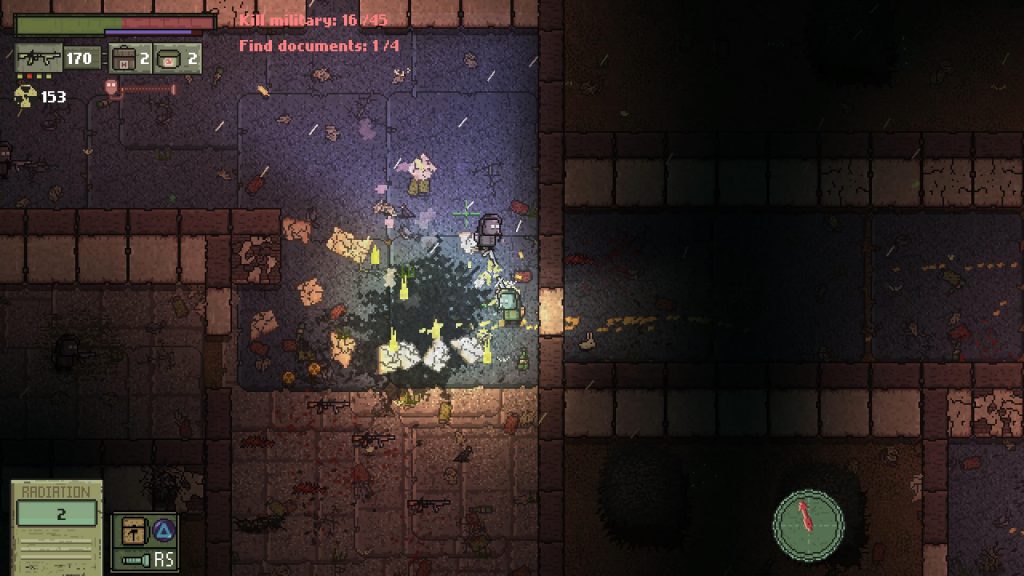 That said, things do eventually get a bit easier.  This is thanks to the upgrade system and when human foes are introduced.  Despite all being armed with rifles, human enemies are easily dispatched and they drop rifle ammo which means you can just stay on that weapon rather than having to rotate through your selection.  The radiation element is still a bit annoying, especially when your mission objective is to clear out a certain amount of it, but generally the game gets a little more playable once you get past levels two and three, both of which are a bit of a pig to beat.

However, Road of Death‘s big problem is that it’s just not all that good.  The shooting is rushed and not all that enjoyable, especially compared to similar games on PSN.  The combination of primitive visuals, speedy enemies and unsatisfying guns makes it all a little unenjoyable.  But then when you throw in the clunky weapon switching, the chore of clearing up radiation, the unintuitive tent action selections, the miserable night sequences (which of course give you a limited torch battery) and everything else, Road of Death never really feels like fun. 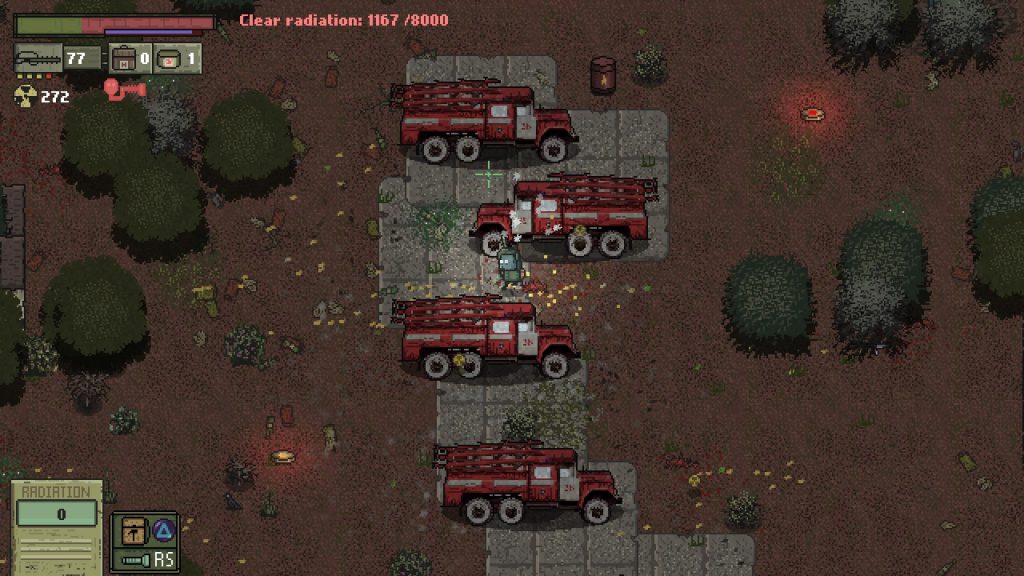 Also, the levels feel a bit repetitive and soulless while the enemy designs are simplistic and unclear.  So really, there’s not one aspect of the game where you can say they’ve nailed it.  And also, it just has that cheap Steam port feel to it.

There’s an idea here though.  Mixing twin-stick shooting with survival horror mechanics should work but really it needs better visuals, beefier guns (there’s no excuse for a weedy shotgun impact when Syndicate nailed that shit in the ’90s), more interesting levels and interface controls that are designed for consoles and not just ported quickly from the PC.  Unfortunately, Road of Death doesn’t come close to realising that potential.

Road of Death
4 Overall
Pros
+ Is playable enough once you get used to the early difficulty spike
+ Rewards cautious play
Cons
- Weak, and often unhelpful, visuals
- Unsatisfying shooting
- Repetitive levels that don't feel very well designed
- The survival elements feel intrusive
- Poorly designed interface and controls
Summary
Road of Death mixes twin-stick shooting with classic survival horror mechanics but none of it is done well enough. There's a degree of challenge that's mildly interesting for an hour or so but beyond that, the game just isn't any fun to play.