Ultra Mission is a top-down shoot ’em up from State-side indie studio, Gumbo Machine (which is mainly just Benjamin Hapferer who handles programming and graphics duties on this game).  On the face of it, this is a fairly unremarkable game.  We’ve seen plenty of top-down shooters on PSN (we seem to review them all the time, but maybe that’s just me as I do nearly all the shoot ’em ups) and plenty of them have a retro look to them, so Ultra Mission isn’t offering any surprises there but it’s most interesting feature is that it’s cross-platform, with the PS Vita!  Making it the last Vita game (so far).  That’s pretty interesting, but as the Vita release was actually last year, we’re reviewing this one on the PS5, as this version is new.

The game sees you playing as an unnamed agent of the Stellar Exchange Commission and you are tasked with clearing out the monsters and robots from Otto Labs.  Aside from a small employee handbook, that explains the mechanics of the game, there really isn’t much of a plot to be found and with minimal options to play around with, you’ll be headed straight into the game. 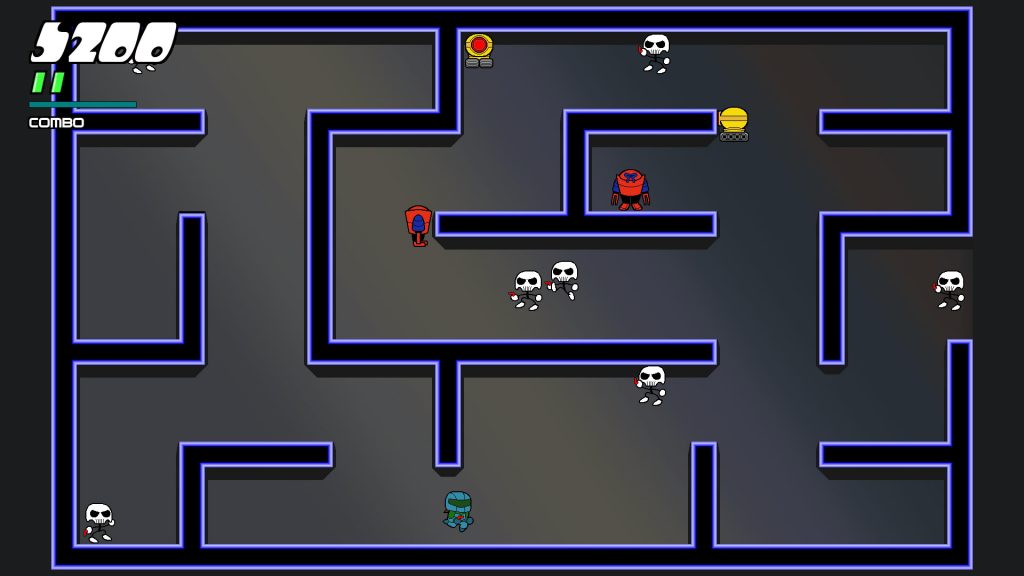 What you get is twenty single screen levels that each have, on average, around a dozen or so enemies.  You control your agent with the left stick or d-pad (annoyingly though the game menus insist on d-pad only) and fire your gun with

.  That’s basically it.  Now you’d be thinking ‘hang on!  Top down… shooter….’ and expecting twin-stick controls, right?  Well, Ultra Mission is very odd in that pressing X by itself makes you fire to the right.  If you want to shoot you have to move in that direction or hold

which freezes you on the spot, but lets you aim and still shoot.  Oddly,

freezes you but doesn’t let you shoot which feels like a stupid bug to have, especially in a game that has so little going on.

That’s basically it when it comes to your agent.  So then all that remains is for you to go through each level shooting enemies and trying not to be touched, shot or touch the walls (which will kill you for some reason).  As you kill an enemy, you’ll gain points and add to your combo meter, allowing you to score more from each subsequent kill.  Or you can just run straight to the exit but that won’t really help your score. 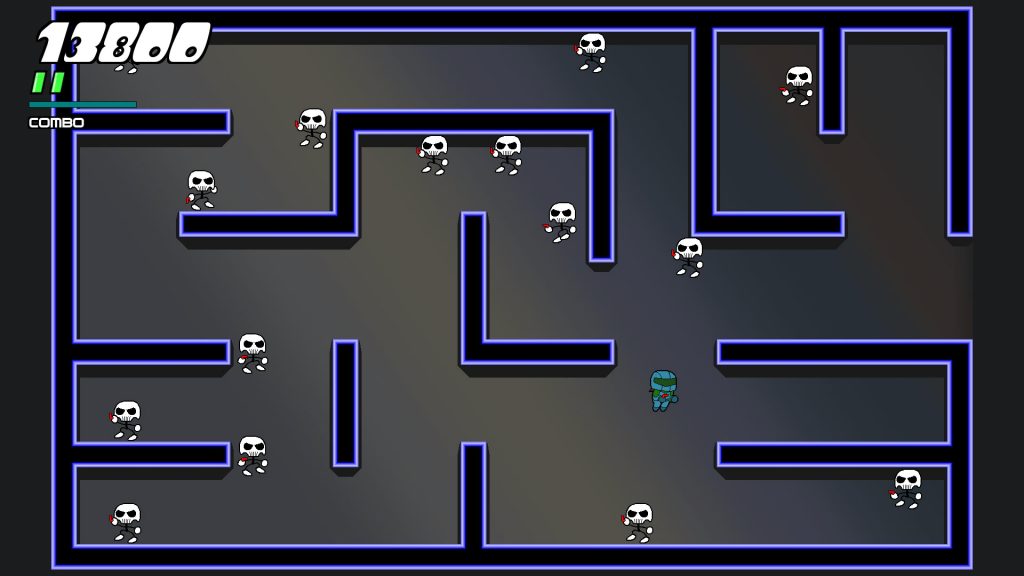 And that’s Ultra Mission.  There’s really not much else to it.  The twenty stages all look basically the same, the enemies wander around aimlessly with no AI to speak of and more often than not will kill each other randomly before ever really being a threat to you.  There’s no weapon upgrades, no perks, no dodge moves, no boss battles or set pieces of any kind, no plot or cutscenes, no interesting visual effects, no humour or anything.  Just a quarter of an hour of very basic shooting action with clumsy controls, brain-dead enemies, Commodore 64 level design choices and zero replay value.   You can play the ‘retro’ card to a degree but games like Robotron were doing this much better forty years ago. 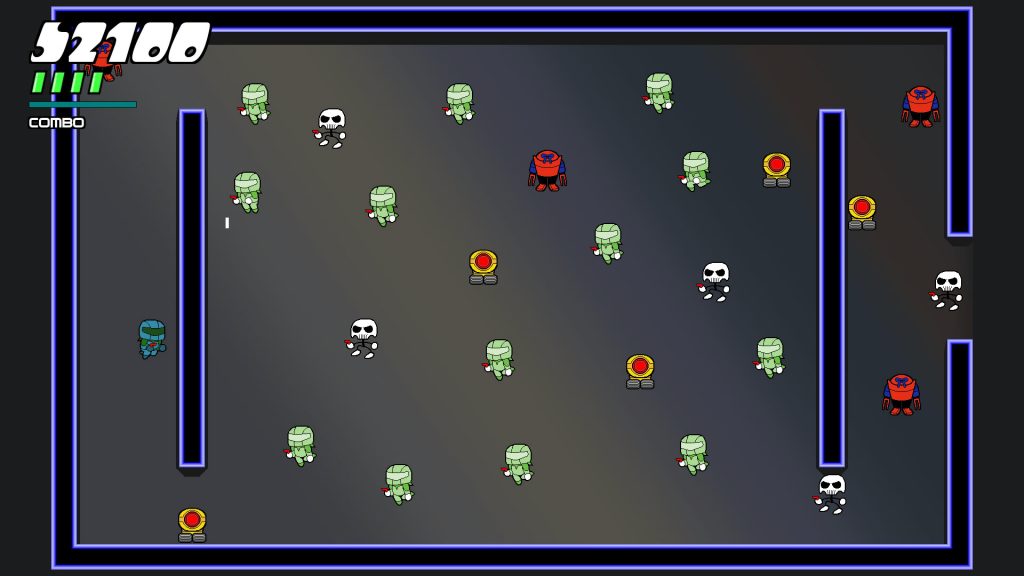 In terms of presentation, things don’t really improve.  There’s an inoffensive tune playing in the background and some barely audible speech effects while visually, things look a bit like an early ’00s Flash game.  Even the font choice on the score is hard to read most of the time.  It’s all just very low effort or maybe high effort but low talent.  Either way, Ultra Mission underwhelms on every front.

There’s maybe a few minutes of ‘something’ as you get used to the initially harsh game mechanics and start making progress, but then you realise that there’s really no challenge here at all and that’s it.  So, all in all we can’t really recommend this one and, aside from being painfully basic for a PS4/PS5 title, it’s also not a great way for the Vita to go out.

Ultra Mission
2 Overall
Pros
+ Is, on a basic level, playable
Cons
- Clumsy controls that should have been twin-stick based
- Useless AI
- No features to speak of
- No replay value at all
- Primitive presentation values
Summary
Ultra Mission is a top-down shooter that just doesn't offer anything. It's all well and good playing the 'retro' card but this game would have underwhelmed as much in 1982 as it does in 2022. You can't ignore forty years of innovation in this genre and claim it's a love letter to it.