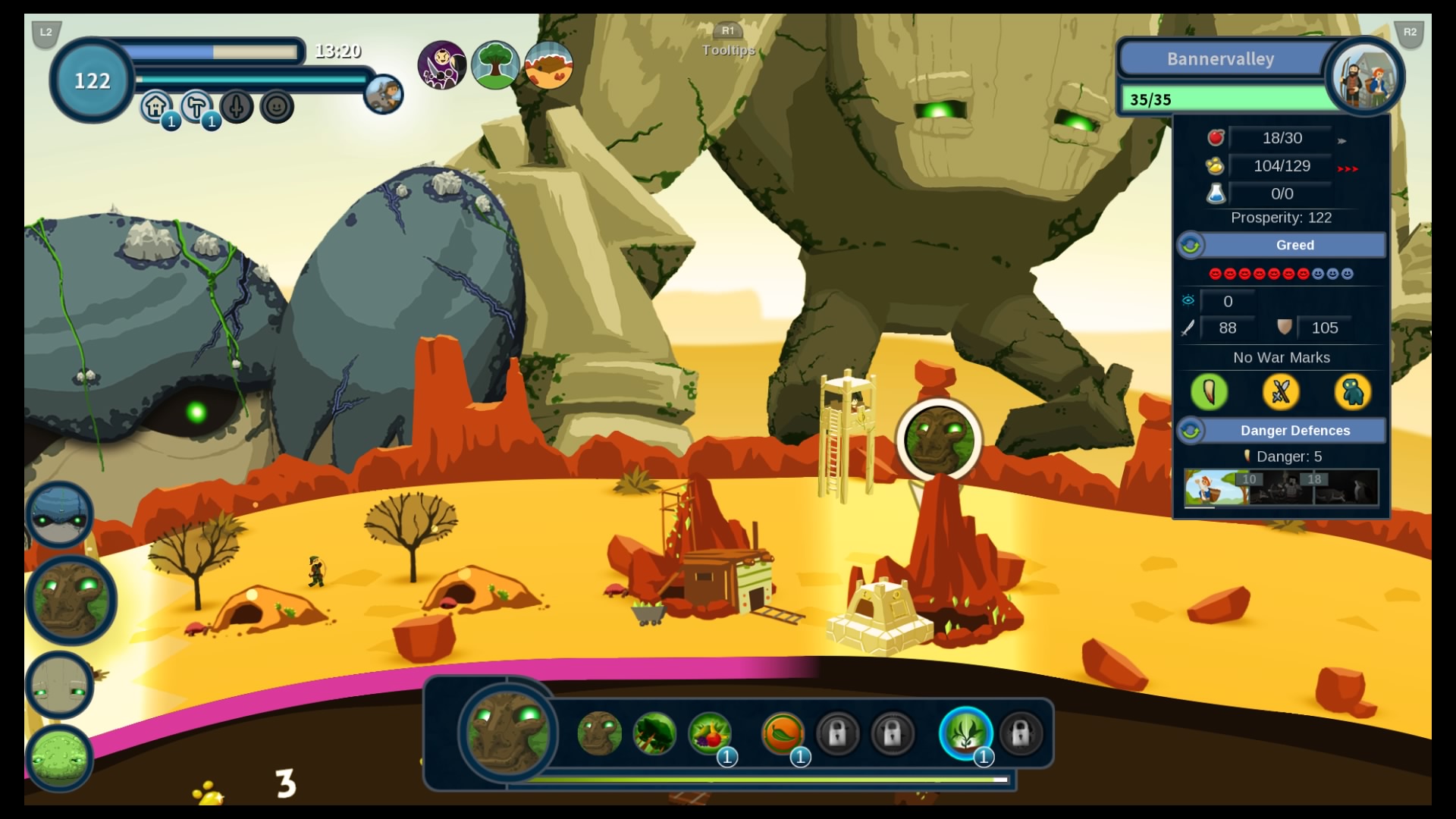 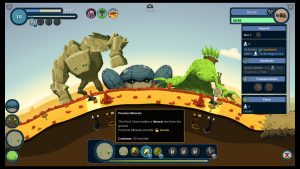 God games revel in the grand scale of things allowing you to create mountains and oceans.  Ever since Populous people have been refining the genre and giving you more control and making things bigger.  Reus takes things in the opposite direction limiting itself to 2 dimensions but it loses none of the scope.

The playing field in Reus is a full globe which you can zoom and rotate.  A neat little touch here is that the world starts off a barren grey husk before you start to mould it to as you see fit.  You control four giants; a tree one, a swamp one, a water one and a rock one.  Instead of having direct control over them you instead move a cursor around the globe and select which move you want them to complete.  This works to keep things simple as you can quickly flick between the four giants and select which one you want to move and what you want it to do.  Each giant has a series of skills available to it and the skills unlock during each game you play dependant on what you achieve that go.    All these are accessible through a very intuitive  menu which make controlling the giants a breeze.

Running throughout the game is decent art and animation too, in order to make mountains or oceans the giants will plunge their arms down into the ground and mould the earth, straining with the effort involved.

Things start really simple with you just needing to create some resources such as animals or fruit.  Once these are down a tribe moves in and a settlement is created with marked boundaries.  In order to support your tribe and see it thrive you need to add more resources.  Unlike other God games where the inhabitants will often seek out their own resources in Reus the only resources available are the ones you place yourself. 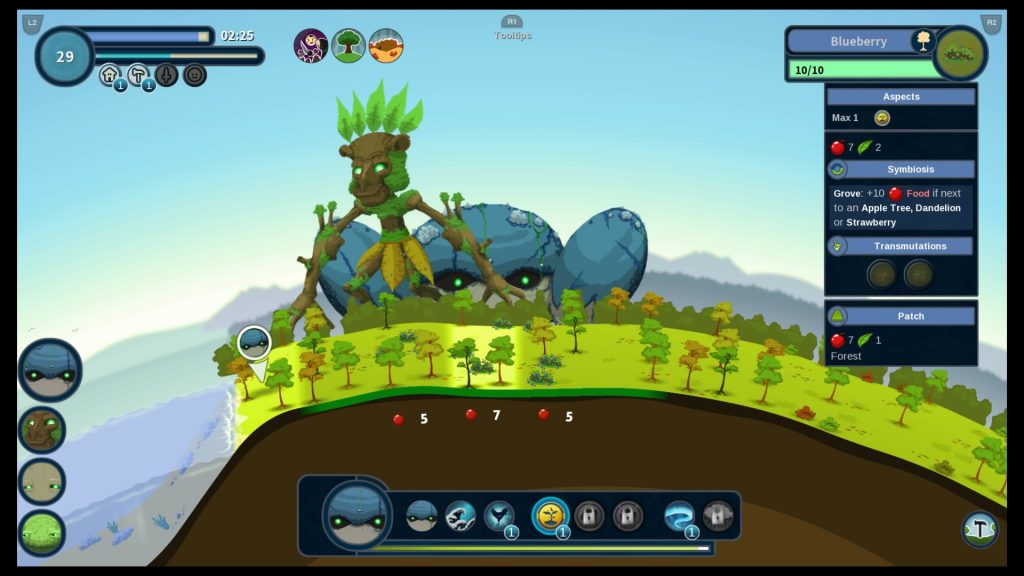 Before long your tribe will start to build something and will require certain resources in order to do this, and have a time limit in which the building has to be built.  Given that useable resources need to be placed within the village boundaries you only have so much space to work with and each resource really counts.  What you will find is that if you just throw down the basic resource then your villagers wont then have sufficient resources to complete their project in time.  In order to manage this you need to carefully choose what resource you place next to each other as this can create a symbiosis which will boost both resources as a result.

Balancing the symbiosis with the available space is what you’ll be concentrating most on.  Each resource gives you a numerical value of what it produces, and when you are looking to increase this via symbiosis you get another number to consider.  It ends up feeling like a maths puzzle, does one mine produce less than an animal enclosure, and is it worth replacing the mine with a tree to symbiotically increase this to produce more animal wealth.  All the while the timer is ticking down on the latest building.  Failure can come down to the simple fact you didn’t plant a tree next to your animals, the numbers are really that tight.

Once your tribe is up and running war will come.  Your tribe will get greedy if you allow them and seek to conquer neighbours, or even attack your giants themselves.  You can play this two ways either keep your tribe in check through fear, or set your giants on a rampage to subjugate and destroy everything.  This is a fun elememt to the game.

The modes available are arranged in timed selections from a 30 minute game upwards as well as a general free play.  The timed games are a nice feature as they give you a clear understanding of how long you’ll be playing for ensuring the game easier to pick up and play for just an hour or so.  Progression in the game comes from unlocking certain feats such as finishing a game with a large degree of wealth or land.  This is a nice feature as it gives some structure to the game, allowing you to aim for certain criteria each go.  There is not much else to be found here though and if you don’t like God games there’s nothing here for you. 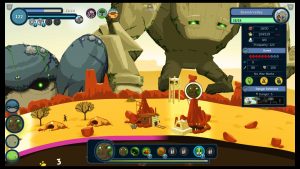 If you like God games then you’ll find that Reus has a decent level of depth to it, proving that a smaller scale God game can still pack in the complexity.  You don’t find many of these games on the home consoles and the conversion here has been handled really well.  Whilst it may not do anything to set the world on fire it fills the God game void on the PS4 and does a good job at it.

Reus
7 Overall
Pros
+ Decent level of depth to be found + Nice art and animation + It is nice to see a decent God game on the PS4
Cons
- The resource management ends up feeling a bit too much like maths puzzles - If you don't like God games there is nothing else for you here
Summary
As a smaller scale God game Reus still manages to pack in the complexity, even if the resource management ends up feeling a little too much like maths. With a decent art style and presentation Reus is a welcome addition to the PS catalogue.