Destruction is still something heavily sought after in gaming. Most environments are indestructible, and understandably so. Even beyond processing power, level design goes out the window if you can literally level the entire map. One series of games that has dabbled with the idea of destructible environments is Red Faction. The first two games were first person shooters which allowed, to an extent, you to destroy walls and deform the environment which was rather impressive back in the PS2 days. The third title took this defining feature but put it into an open world and changed the perspective to third person. It is that title that has now been remastered for the PS4 in the form of Red Faction: Guerrilla Re-Mars-tered. 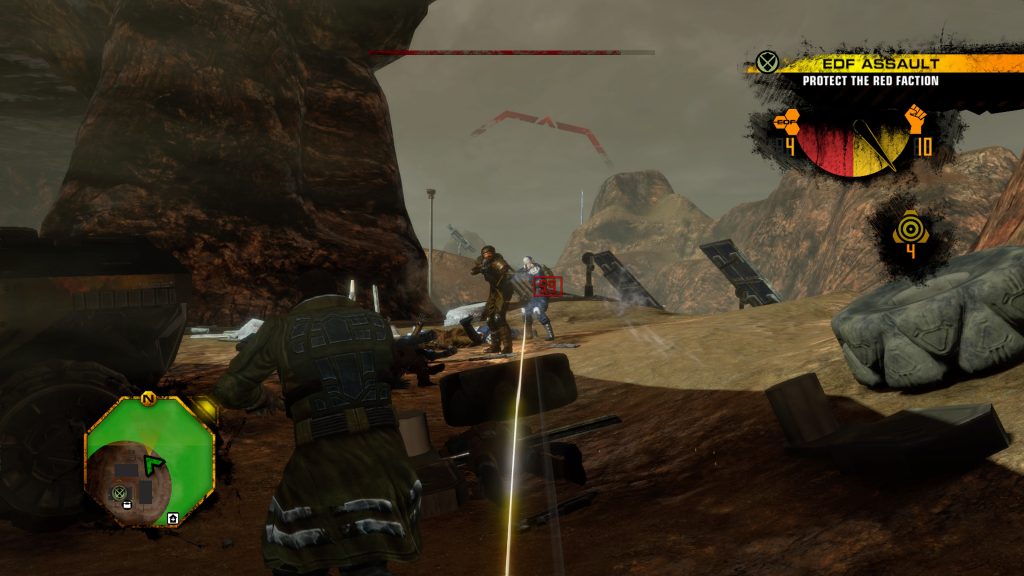 You play as Alec Mason, a miner who has travelled to Mars, hence the odd title, to work with his brother. Very quickly it seems Mars isn’t all it’s cracked up to be and your brother is involved with the Red Faction, a rebel group opposing the EDF who control Mars. You are found guilty of being a Red Faction member by association despite only just arriving on the planet and so you have little choice but to join them for your own safety. And from what you see the EDF are proper evil anyway.

Being a miner equates to being an expert in explosives. This is where the destructibility comes in. Although the landscape of Mars is solid, all structures can be destroyed. This is an open world game but there aren’t great cities or even small towns. You get the odd building every now and then, maybe a small group together, probably a limitation needed to allow the level of destruction that is available and it still impresses. Alec has a massive hammer on him at all times which can be used to simply bash on items. Each swing will create holes in structures or swipe away supports, take down enough of the structure and it’ll collapse, rather realistically, under its own weight. Of course the whole game is geared towards this destruction so although the hammer will be your go to, you’ll have explosive charges that you can set multiple of at a time to flatten buildings, rockets, even bigger rockets as well as weapons more suited to taking out the soldiers who’ll be trying to stop you. The developers know that this is the selling point so they try to make it as entertaining as possible. 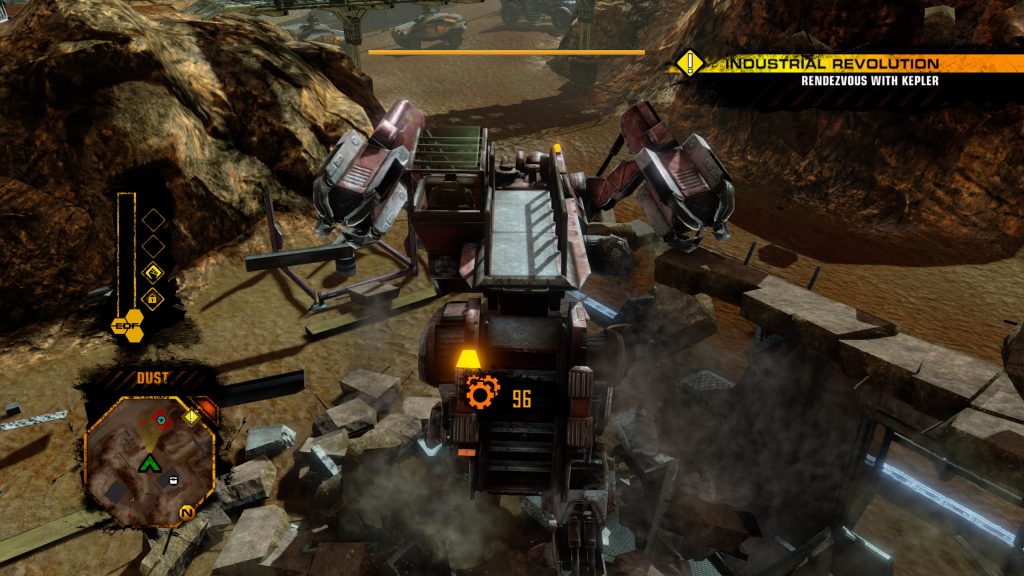 There are a lot of unlockable items and abilities which you can purchase with scrap that you gain from destroying stuff which helps with the fun. More ammo, explosives, armour and new weapons help you stay out in the world longer and blow things up better. A lot of the missions you’re given play into this, requiring you to take down structures however you want.

You’ll also get other open world staples however and side missions can range from driving time trials, tailing someone, destroying a building in a limited time or operating a turret on the back of a vehicle to cause as much damage as possible. I call them side missions but you’re actually forced to do them at times. You’ve given a set number of main missions per district but you can’t complete the final one until you’ve reduced the EDF’s control in a region to zero. The main missions often won’t be enough to do this so you have to make yourself busy doing side missions and destroying key EDF structures. Once you manage it the final mission in that region will unlock allowing you to liberate that sector. You’ll then move onto the next and do it all over again, unveiling more structures and side missions along the way. 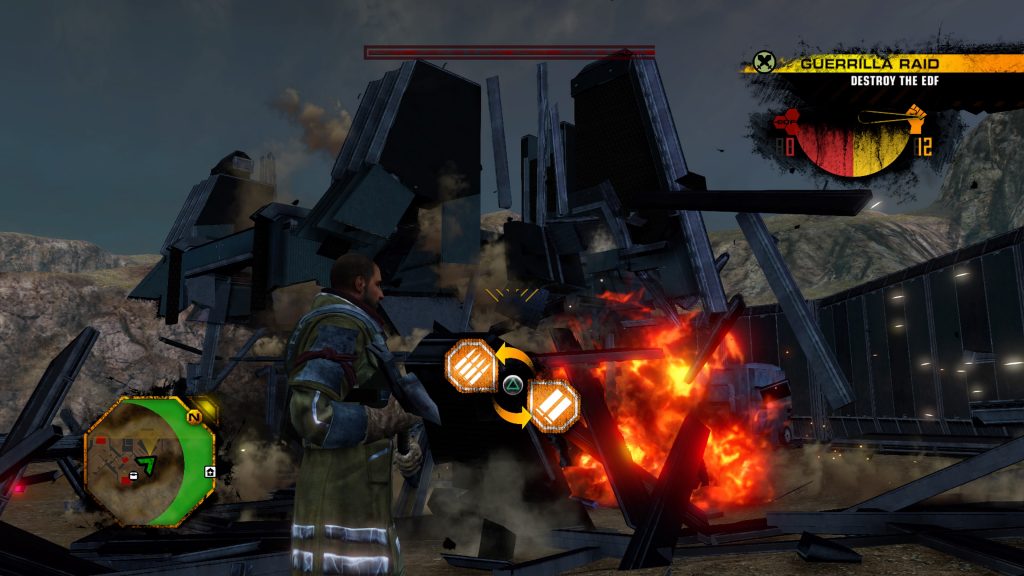 As this may imply there aren’t enough main missions to fill out the game so you’re forced to do the same repetitive side missions or simply go around blowing stuff up in order to progress. There are surprisingly few main missions in the game in fact, where as there is lots of padding. Hundreds of collectibles, of which there are multiple types, and over a hundred side missions pack out the game but aren’t necessarily that fun to do. This is also from a time when every game needed a multiplayer component no matter what and unsurprisingly it’s dead already.

The remaster does look nice however, upping the resolution and improving some visual effects and in general it runs smoothly, with the odd hitch here and there or slowdown when things really go boom. As usual the prerendered videos end up looking worse than the in game graphics. It also comes with the DLC included so you get an extra campaign and some maps for the multiplayer and the Wrecking Crew mode which challenges you with causing as much damage as you can within a time limit. Not bad for the price point. I did have a bit of trouble with multiple crashes when retrying one of the side missions and I’ve heard of but didn’t suffer from corrupt save files because of this so be sure to back up your saves. 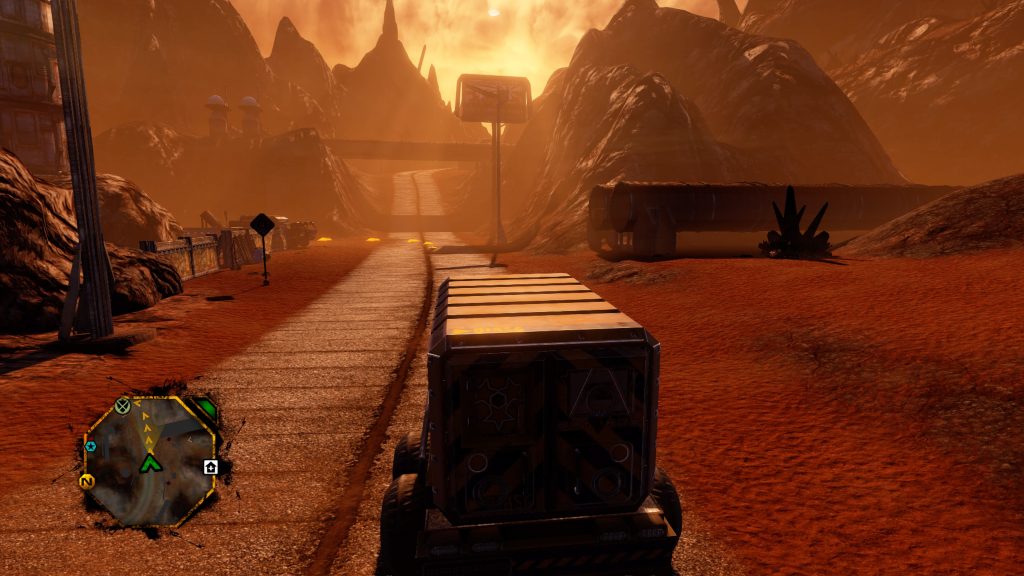 Red Faction: Guerrilla Re-Mars-tered is an odd game to get a second chance but it’s not without its charm. The destruction effects still look great and it almost manages to carry you through the entire game. Unfortunately this is another case of a great gimmick being wrapped in a mediocre package, as the open world is sparse and repetitive (it’s Mars after all) and the activities you’re provided with aren’t the most interesting. If you were already a fan then the cheap price might convince you to double dip. Otherwise if you think simply destroying buildings for hours will keep you entertained then go for it, but there were better open world games out there when it released originally and there definitely are now almost a decade later.

Red Faction: Guerrilla Re-Mars-tered
6 Overall
Pros
+ Destruction effects are still impressive
+ Comes with all the DLC
+ Reasonable price
Cons
- More padding than anything else
- Online is dead
- Technical issues
Summary
Red Faction: Guerrilla Re-Mars-tered offers players a second chance to experience its open world. Some technical issues aside, it's the lack of variety in the world and mission design that stops the fun and still impressive destruction from making this a must play for those who missed it the first time.