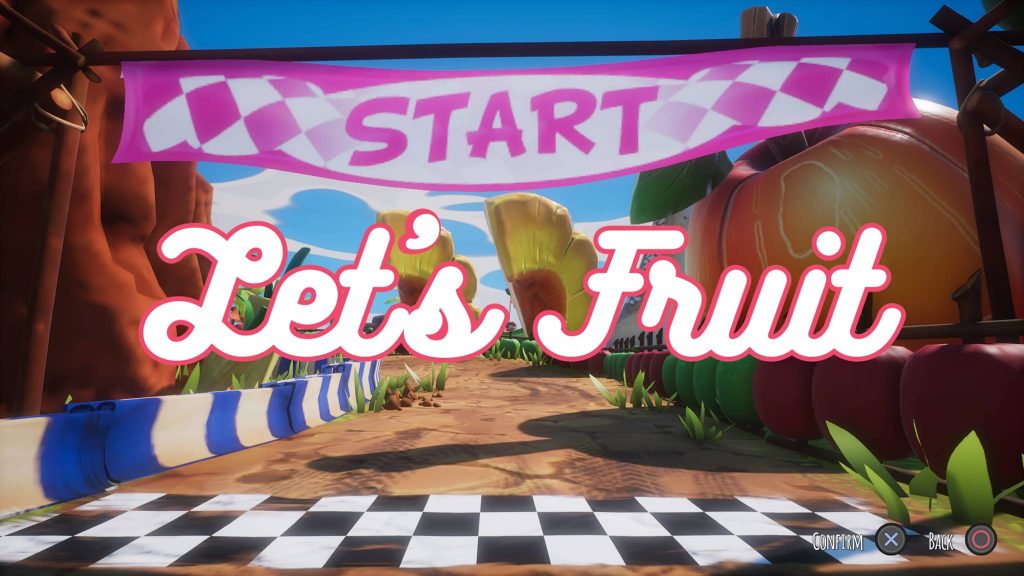 Although Kart racers seem to be quite simple on paper in terms of design, I am sure there is a lot more to it than simply plonking a bunch of characters into colourful worlds and recording a few woo-hoo’s for the entirety of the voice track. It’s safe to say that Nintendo go above and beyond to deliver Mario Kart and to keep it leagues ahead of the competition, but for the likes of other formats, there isn’t much in the way of choice, with only the likes of Sonic and Sega Allstar Racing Transformed and F1 Race Stars to keep us going from the previous generation.

Of course, with a gap in the market for a Non-Nintendo competitor, it’s reasonable to expect that if larger companies are not willing to jump in then it will be up to indie outfits to go for the gold. Enter 3D Clouds with their debut effort, All-Star Fruit Racing.

All-Star Fruit Racing enters the grid with a massive disadvantage, it doesn’t have the benefit of a franchise to derive from. As the title suggests, the game is about fruit, its applications in improvised karting weaponry, the characters and the world they inhabit. For all the limitations of having a game centred around what would be a singular level theme in any other kart racer, the theme does lend itself quite well to creating colourful environments. The tracks are fairly well designed graphically with the help of the Unreal 4 engine. However, the overarching theme is inconsistent in execution due to several factors. 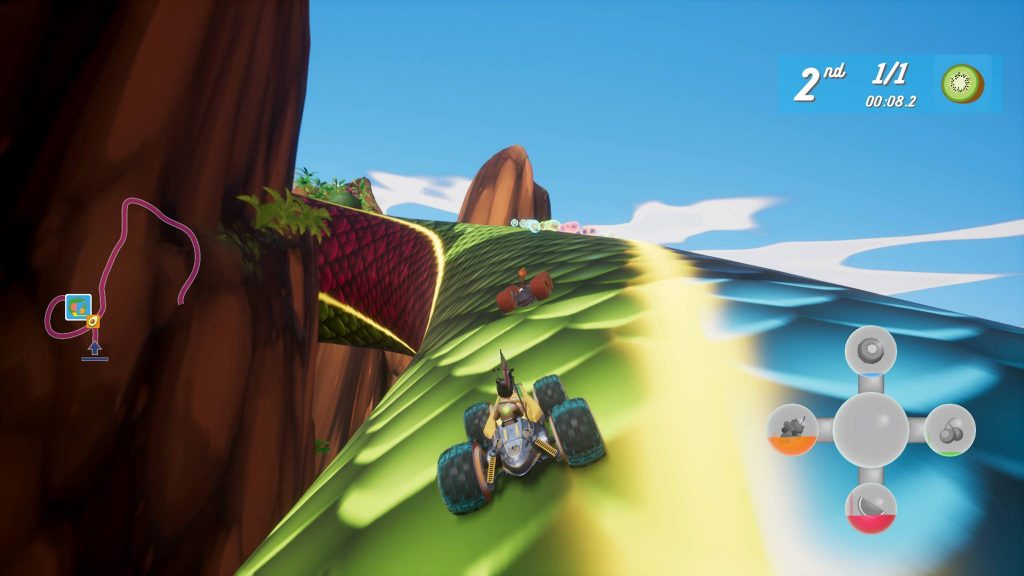 For characters, the fruit dynamic only comes into play when deciding which special attack you want during a race. These can range from thrown cherry bombs to giant apples that block the path of your opponents with most of the capabilities being decided by whether you want to shoot or drop a weapon behind you. Otherwise the characters are all the same in term of gameplay and the rest of the abilities and weapons you pick up are not fruit related in the slightest. These range from your typical speed boosts to snowballs that are thrown in front, or variations that only differ based on slightly cosmetic differences. Likewise, the all-female cast are completely uninspiring in design, looking like the puppet-like material people from the old Comfort detergent adverts.

There is an upside to the characters being standard across the board however. This lends itself to balance and allows players to pick up any avatar they desire without the fear of being penalised due to weight, kart size or differing hit boxes. But again, on the flipside, this does remove any sense of depth that the game could have while also removing any semblance of personality from the racers in the same process. It’s a tough thing to call in terms of whether the balance is successful, however I would lean towards wanting more personality from the characters as it doesn’t feel right to have a kart racer that doesn’t have a character that’s worth sticking with. 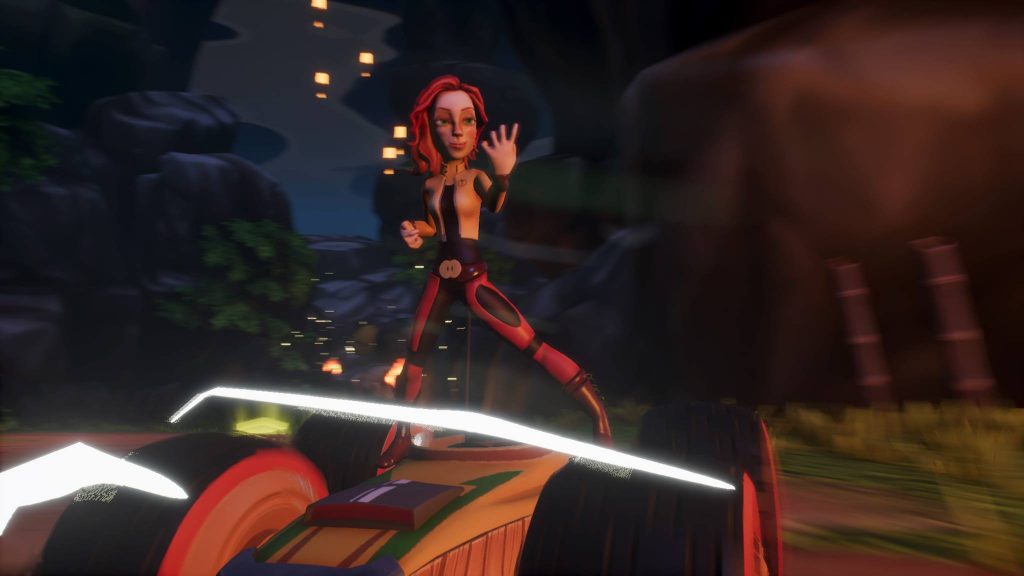 In terms of gameplay, things are a little bit more interesting. There are a few ways in which you can race, and these are found in the career mode for offline. This is your typical offline tournament mode where you must play through races to accumulate a score over the course of several tracks to win. Where this differs from the likes of Mario Kart is that these aren’t all simply straight races. Instead, each of these events have a gimmick of some kind. Whether they are simple races, elimination events where you must stay in front of the pack to survive, Dragster where you earn your powerups periodically and sprint where the track is short and only a single lap.

This approach to a career mode helps keep things varied and fresh while also helping players get better at the fruit mixing mechanic which is available in certain events. Instead of your typical randomised power up approach, this allows players to mix power ups together to transform the ability, either changing them completely or upgrading certain weapons to be more effective in the race. This gives the gameplay a much-needed sense of depth as players can work strategically to earn certain abilities to boost their speed or offensive capabilities or simply to fill up all meters to use their special move. This is a neat idea; however, It is sadly underutilised with some events not even including powerups that you can pick up or reverting to the usual Mario Kart shenanigans for posterity. 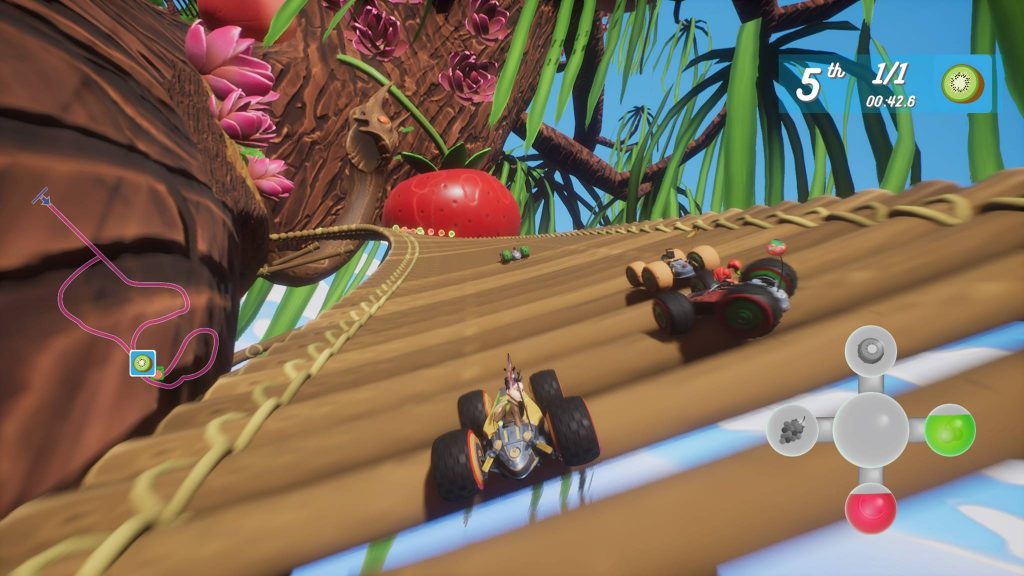 Weapons aside, none of these ideas would be worth their salt if the general handling of karts was awful. Luckily this is another area in which All-Star Fruit Racing showed some promise. The karts respond well, allowing for tight control of turns and easy drifting. Due to this tight control however, it looks like 3D Clouds has dialled the basic difficulty of the game to cater to those that would be at home with drifting around every corner at full speed as the AI is surprisingly aggressive. It’s not quite at the level where there is rubber banding, but there are times where it felt like a real fight to stay in front, even without being hammered by projectiles every five seconds. For what is presented to be a game that is open to kids with accessible driving mechanics, I found this a bit strange as it seems needlessly punishing and it makes it hard to figure out exactly who the game was made for.

The gameplay is further let down by an inconsistent frame rate than stutters during more populated race tracks (or in some cases, for no good reason whatsoever). This performance drop makes the game feel unfinished and ruins what could be the most redeemable aspect of this otherwise inoffensive and uninspired racer.

All-Star Fruit Racing
4 Overall
Pros
+ Not too bad graphically
+ Somewhat smooth gameplay
+ Interesting weapon mixing dynamic
Cons
- Not much to see, despite the amount of cups
- Off-putting framerate drops during races
- The Presentation is about as generic as it gets
Summary
It’s hard to reason why All-Star Fruit Racing is a game that exists, let alone a game that exists on the PlayStation 4. It’s utterly uninspiring in every single way, from the title to the shallow, vacuous characters who lack any kind of personality. There are brief hints of some good ideas within the gameplay, however these do not detract from a myriad of problems that makes the whole experience feel rotten.