It’s great to see retro staples come back with a new coat of paint. Re-releases are key to preserving gaming’s past and it’s always nice to see the games of old making a comeback. Today it’s the turn of Alex Kidd in Miracle World DX. Coming from Jankenteam, this port of a classic adds some modern touches whilst still trying to retain the original’s gameplay. 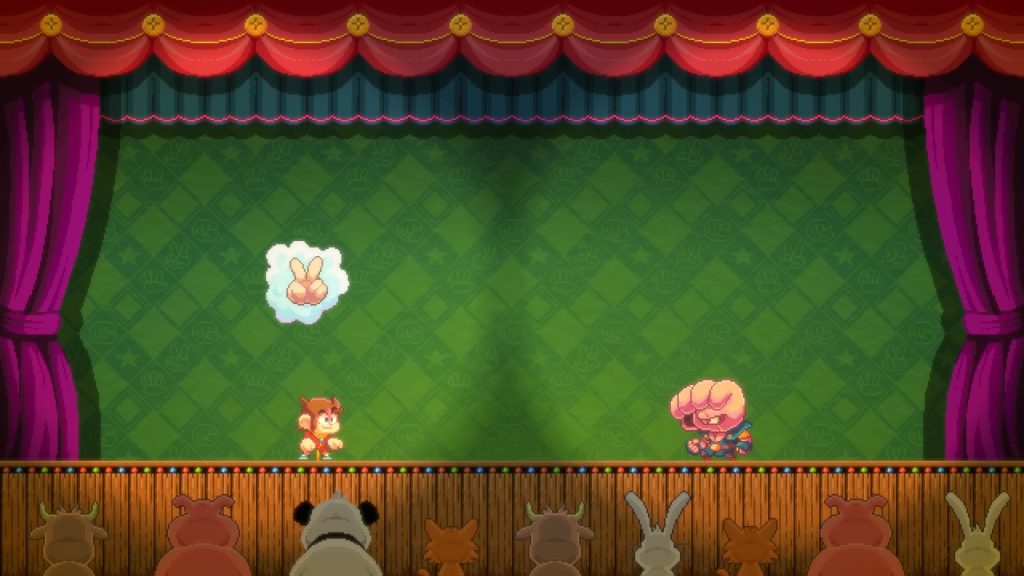 For the uninitiated, Alex Kidd in Miracle World is the first of the seminal Master System series. Before a blue hedgehog came along, Alex was Sega’s mascot and was effectively the face of the platform. To play this game now shows every bit of its age. Starting with just three lives, Alex’s quest is to save the Radaxian Kingdom from the evil Janken. He’ll have to jump, punch and ride his way through several levels.

Our hero has one standard punch but you can find and purchase power ups to deal more damage and vehicles to speed up your movement. Broadly speaking, Alex Kidd in Miracle World DX tries to maintain the original levels and enemy placements. Jumping feels a little tricky. It’s inconsistent and momentum has definitely carried me off a few platforms. It can be bothersome. You don’t get much air control and your jump length is determined by how long you hold the button down. When the game calls for precision, I just can’t seem to find it. 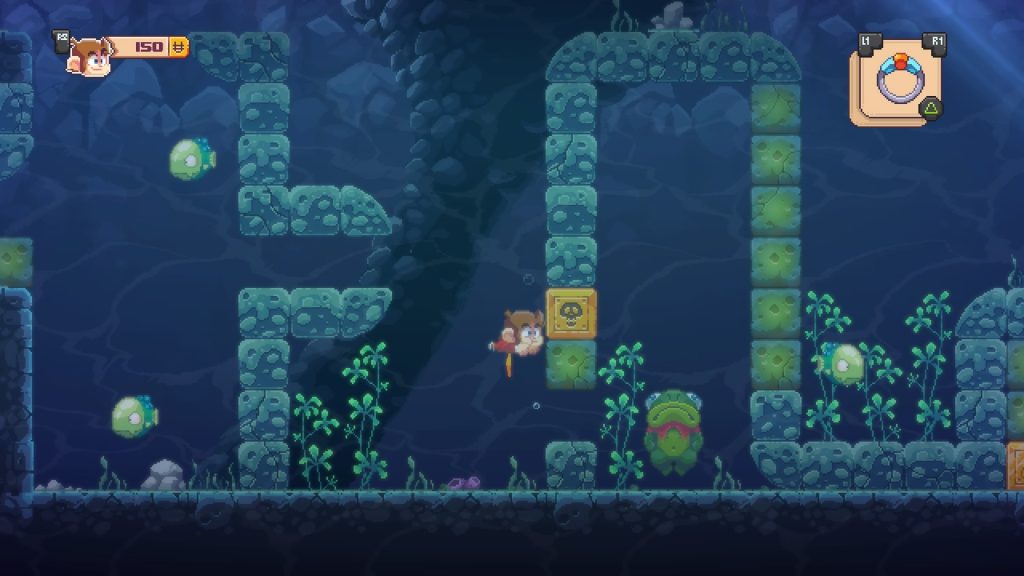 I’m unsure if this was present in the original but this release at least comes with some conveniences. You have the option to take on infinite lives which do make the game’s issues easier to tolerate. Checkpoints are frequent which does mean you’re not repeating a stage after deaths. Without these additions, the old rules apply. You can pick up additional lives but, once these are expelled, you’re continuing from the stage start. Using items is simpler by using the shoulder buttons. There’s no need to enter a menu and pick your power-up.

At least there’s a ready comparison with the original in the package. Hitting L2 switches between the two and it’s nice to compare and contrast 1986 with 2021. Alex Kidd in Miracle World DX adds some modernised graphics which I find very charming and detailed. The original backgrounds have been given more life whilst maintaining the original game’s structure and geometry. It’s not instant but the switch does come with a colourful transition. The menus keep that clean aesthetic and they help keep the package cohesive. 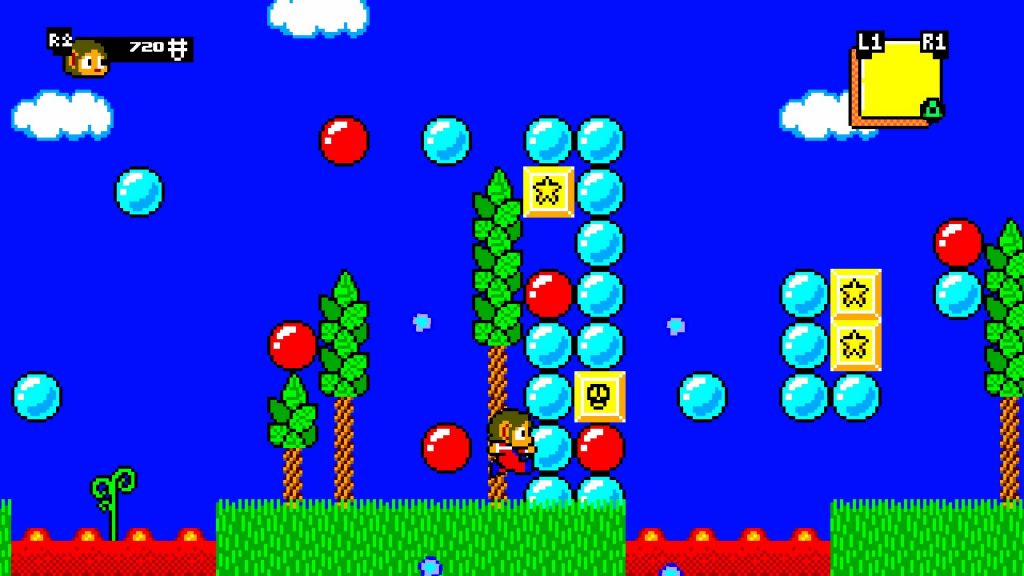 It feels like an easy thing to do but the new visuals have a more varied palette to play with and can almost reimagine character sprite. They have them more personality. It has a very clean look to it and enemies are nicely animated. Little touches like Alex punching with both fists and ghosts materialising in a cloud of smoke are quite neat. The cutscenes are simple but still an improvement over the original release.

The music has also been overhauled. It’s nicely remixed and the original score has been given a more laid back, tropical feel. It fits really well and it’s another case where I enjoy those efforts to the original. Presentation really is where Alex Kidd in Miracle World DX is at its strongest. It’s a shame the rest of the package shows its age.

Level design is every bit as tricky as it was 35 years ago. Enemies provide some stonewall obstacles and it can be quite frustrating at points. Power-ups aren’t handed out at random but some do seem to operate on a cycle. The behaviour of the jump is already a problem but I’ve noticed some rather wonky hit detection that does hand me some unfair deaths. Again, my recollection of the original is flimsy. It might be authentic but it doesn’t hold water under today’s scrutiny. 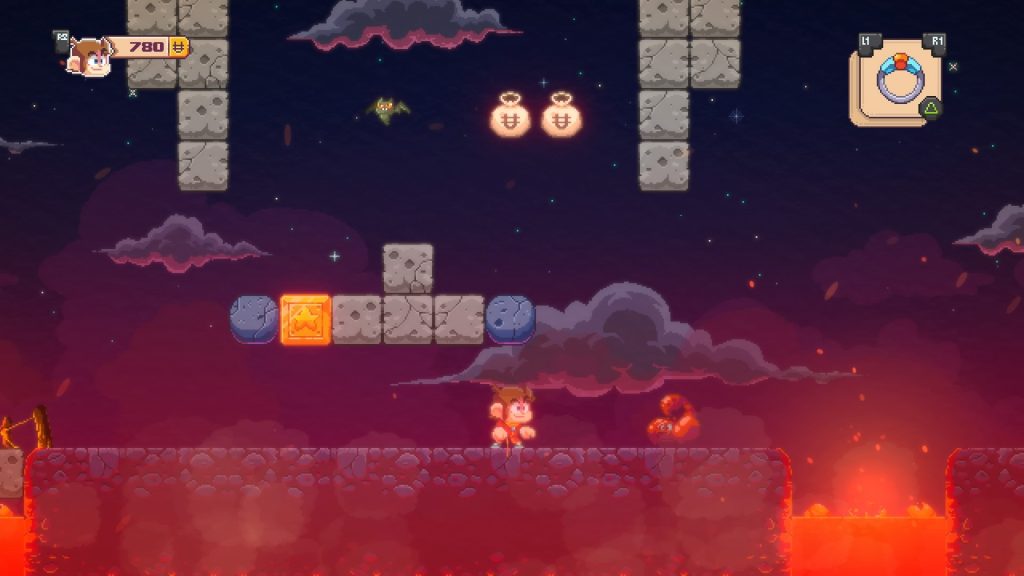 After completing the game, a couple of extras are handed your way. Classic Mode presents what appears to be the original game with some Master System marquee art. In a package where the older art is available at a touch, this feels redundant. The other bonus is a boss rush which is presented nicely in a theatre setting. It’s a shame you can’t skip the rock, paper scissors battles but at least they’ve given us something relatively new.

It’s a shame more isn’t done from a historical standpoint. I would’ve loved to have seen concept art, design documents and other artefacts from back in the day. As it stands, the package feels a little undercooked. I really enjoy the new art and soundtrack but the modern look starkly contrasts with a game very much of 1986. There’s a few conveniences but it can’t gloss over the inconsistencies.

Alex Kidd in Miracle World DX
6 Overall
Pros
+ Fantastic, modernised art.
+ Great tropical soundtrack.
+ Some helpful conveniences like infinite lives and checkpoints.
+ Feels reasonably faithful to the original.
Cons
- Can be frustrating to play.
- Very few extras on offer.
- Classic Mode feels unnecessary and redundant.
- Some really poor hit detection.
Summary
Alex Kidd in Miracle World DX adds a modern sheen to a game very much of its time. The new look is fantastic and the soundtrack is splendid. Unfortunately, Alex's jumping and hit detection presents a game that is tough for me to tolerate. With some convenient touches, it might be an okay way to experience what remains a tough game rooted in decades' old design.