From the makers of Stories: The Path of Destinies comes Omensight, a game where you’re challenged with uncovering who murdered Vera, the Godless-Priestess and best hope of bringing peace to the land, and why. You are the Harbinger, called upon when the world is about to end, and with the help of The Witch you will travel back in time, over and over, in order to gain new information and utilise it. 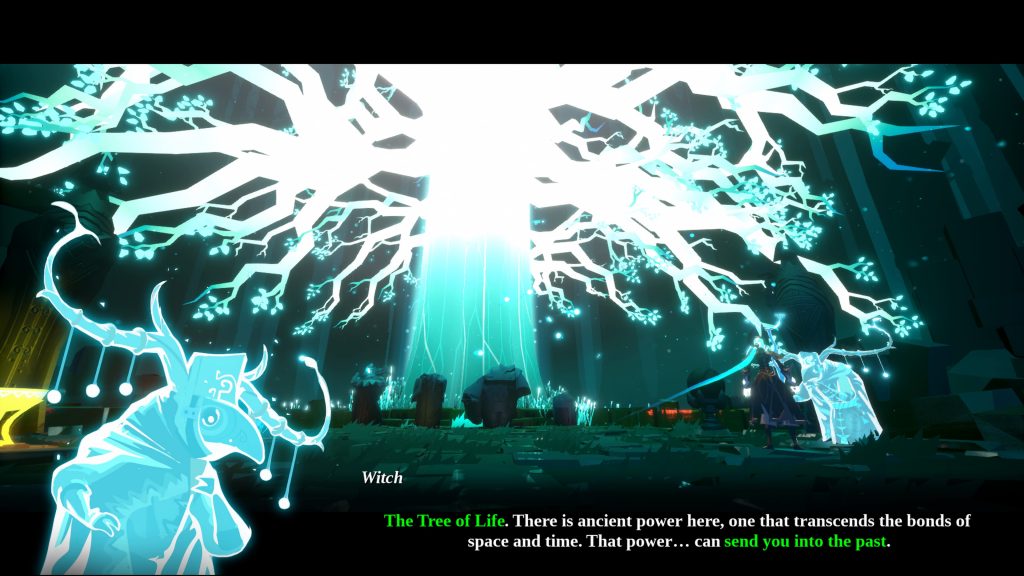 You encounter four key characters that you will follow to reach your goal. Each has their own part to play and in journeying with one you may have to battle another. As you return to the beginning of the final day, and the world ends at the end of that day, every time they have no recollection of you but they know you’re the Harbinger and what you represent despite your inability to talk. Initially you’ll travel with them on whatever their path is on that day, but as you learn key information or how to unlock certain doors then you are able to convince them to take another path.

By hopping from character to character, using what you’ve learned to pursue new leads, you get closer to your goal and change the characters themselves. You aren’t limited in the number of days you can repeat so can visit whomever you wish, but the game will prod you in the right direction with reminders of the clues you’ve uncovered and what they might mean, at least on the default difficulty. Other difficulties remove the clues and/or make the combat harder. 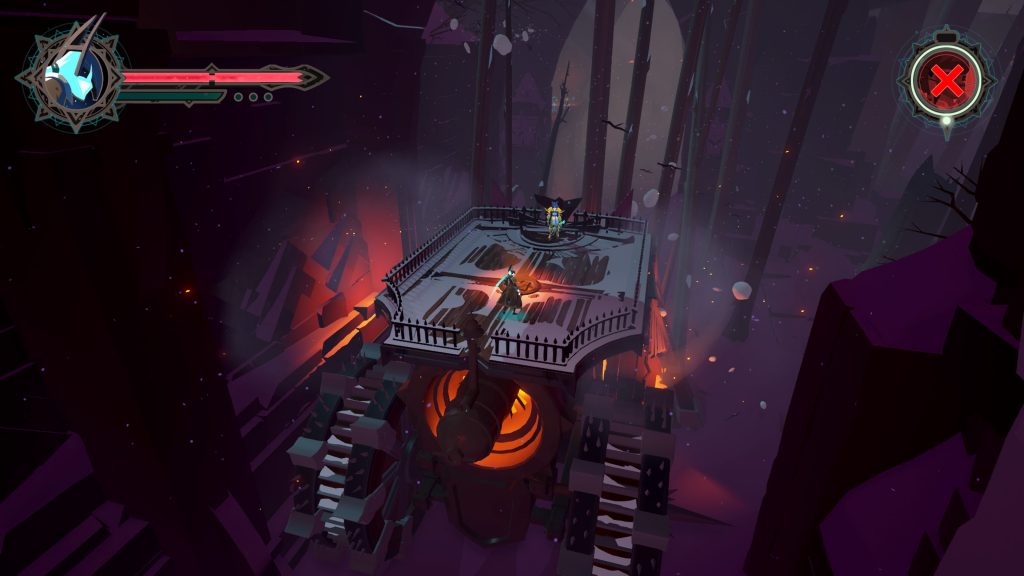 When you enter a level your main interaction with the game is combat. There is some light platforming but primarily you’ll be running around with your colleague and bashing out some light and heavy combos when you need to. The closest comparisons for the combat are the Arkham games, with you being outnumbered and needing to keep an eye out for exclamation points over enemies heads to indicate that they’re about to attack. As mentioned you have a light and heavy attack, but also a dodge and a jump to start with. As you play you’ll gain experience which you can use to gain new moves and increase your combat abilities.

Some are passive, like attack power boosts or life increases, some are controlled via cooldown, like the ability to slow time in the immediate area or throw items or enemies, and some require energy, like a projectile and an instant death move, which you build up during battle and dissipates when you’re not actively fighting.

For what is a major focus of the game the battles are passible. The controls aren’t responsive enough to keep up with the best in the genre, with intended moves not coming out and sometimes non-intended moves occurring. The camera is also incredibly intrusive, you have no control over it as it moves around depending on your location, rather than trying to frame what’s actually happening. At best it’ll keep the aggroed enemies on screen for you to see, at worst it doesn’t even show you let alone the enemies, but that didn’t happen too often. It’s not game breaking, at least not on the default difficulty as the battles are forgiving enough that you won’t be dying too often. If you do die the checkpoints are a mixed bag, some are good, some require a little too much backtracking or sitting through cutscenes. 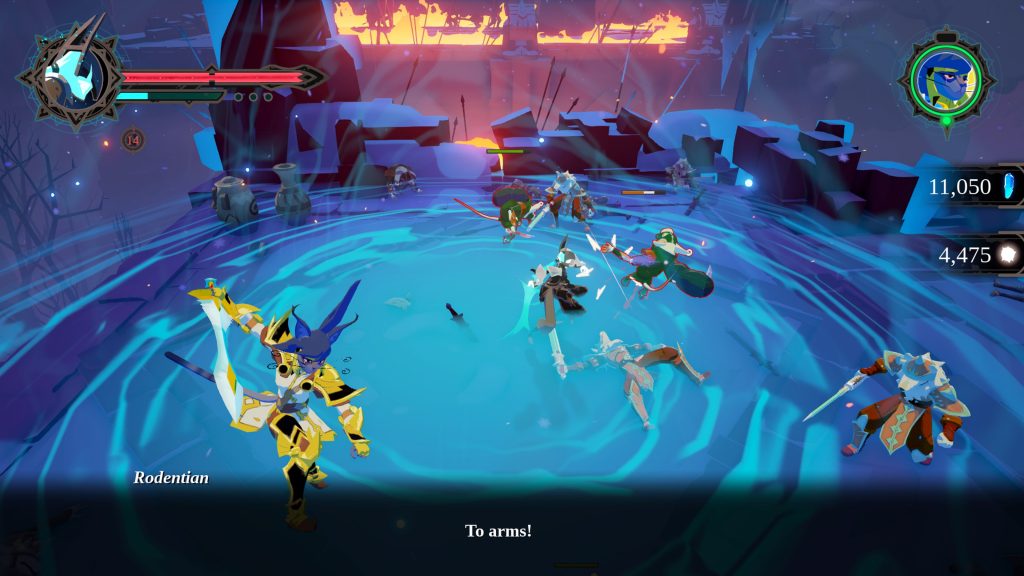 Visiting the same locations as you relive the same day over and over again can get a bit repetitive. You may move down a different path or have to fight different enemies depending on who you’re with or which doors you can open, but they’ll be the same environments with the same chests to find and barrels to break. Although as you get closer to completion the visuals change slightly it’s a shame you don’t access new areas to accompany the progression of the story.

Luckily the visuals are very nice. They are quite simple but stylised enough to make up for it. Colour palettes are strong and the character designs work well with the character’s personalities. There is some minor slow down but it doesn’t damage the gameplay any. There are some great moments with the soundtrack too and the voice work is very well done and again suits the characters.

How long Omensight lasts will depend on how you play it. There’s a limit to how much procrastinating you can do as when you discover a key piece of information (an Omensight) then you are forced to use it when you visit characters meaning you can’t exhaust every iteration of every character’s day unfortunately, but you can try to avoid what you think might be the critical path if you want to flesh out other elements of the story or see how different characters interact with each other. If you want to try and complete the story as quickly as possible then it’ll obviously be a shorter experience but I found, with the limited environments, that it was a decent length. The game doesn’t track it but I believe it took me around eight hours with some procrastination and trophy hunting. 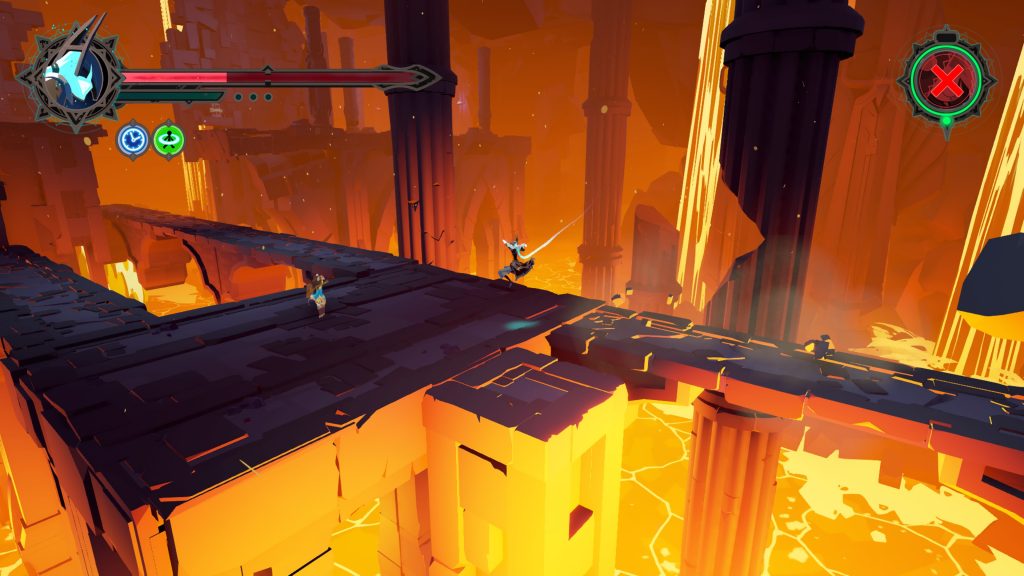 If you enjoy the detective element and the characters then you could get quite a lot of enjoyment out of Omensight. Despite some early promise the combat ends up falling short of the best examples, but it’s still decent, and the constant journeys to the same locations can start to drag, but not enough to tarnish the game too heavily. The visual design and story twists kept me playing to the end and fans of the studio or those intrigued by the premise will certainly get their money’s worth.

Omensight
7 Overall
Pros
+ Interesting and diverse characters
+ Excellent visual design
+ Intriguing story with a few twists
Cons
- Limited locations
- A poor camera
- Combat isn't responsive enough
Summary
Omensight has a great premise and incredibly well designed visuals. The combat isn't as responsive as I'd like and the repetition with regards to environments can start to drag but the story, characters and presentation will keep you playing through to the end.