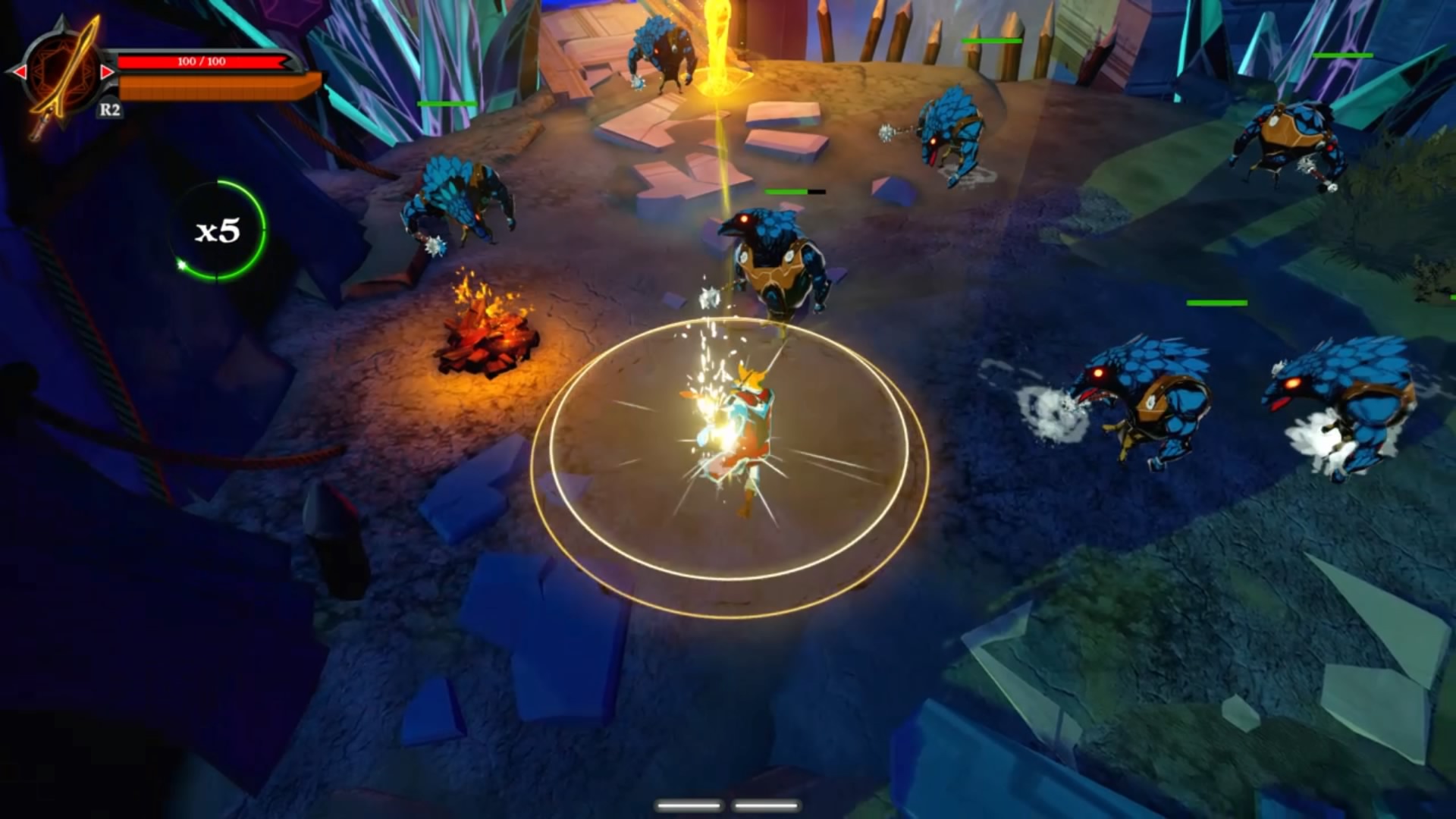 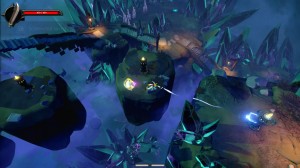 Storytelling in games is notoriously difficult, with many a criticism being  the lack of interactivity within the tale being told.  Stories: The Path of Destinies aims to solve this by offering dozens of stories within the one adventure.  Even though many of the stories will result in you failing to save the world, the game isn’t over as the game cycles back to chapter 1 to allow you to give it another go.  Rinse and repeat boy, rinse and repeat.

You play a Fox called Reynardo who is a kind of sky pirate and the last line of defence against an army of Ravens.  It’s a top down isometric affair, with a dash of RPG, a squeeze of combat and some gentle switch based puzzles thrown in to the mix.  Each cycle of the story will see you through around an hours worth of playtime, after which you’ll be transported back to the start of the game to do it all again.  The trick here being that your skills and more importantly knowledge of the story, carry forward to your next attempt.  This may sound a bit Rouge like, but unlike those types of games everything here is tightly scripted with no random aspects.

After finishing a story for the first time you’ll uncover one of 4 truths, think of them as plot reveals. The truths arm you with knowledge to use in your next run through to allow you to pick a different path, or affect a previously chosen path.  To see the end of the game you’ll need to play four times at least in order to collect the four truths, but to see everything the game has to offer you’ll be playing to see tens of separate endings.  Making this much more bearable is the way each story carries a different feel to it.  The running narration really supports and curates the story very well and these cover themes from love, to end of the world war stories.  There is a lot of fun to be had in seeing how each story will develop.

The meat of the game sees you running round simply planned yet exotic locations and engaging in some combat.  It’s an odd compromise between a full on explore em up and a scrolling brawler.  The levels are just the wrong side of too simplistic, as you are funnelled down a set path.  Movement is limited to running around as you don’t have a jump button, although you do have a grapnel which can help you cross over gaps.  Although the levels will often see you travelling up or down into the screen on lifts, these are one way un interactive, action is resolutely fixed on a 2d plane.  The puzzles on offer are all of the same design too, locked doors or switches showing no real variety in execution.  There are chests to unlock and resources to gather, but this is no loot driven dungeon crawler. 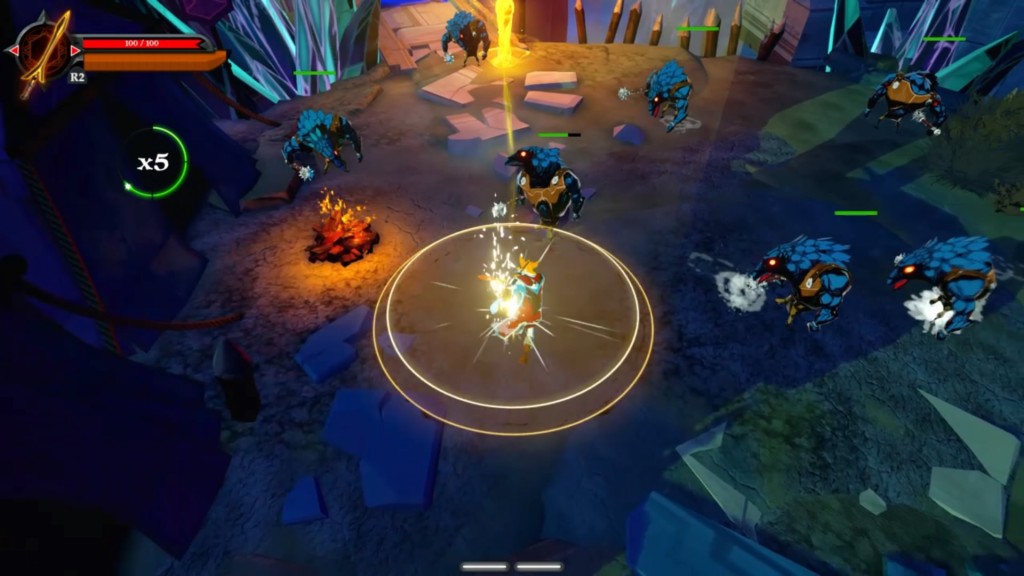 The combat is also infrequent and fairly basic.  You’ll only get into a couple of fights each level, and every fight is locked into a sealed area with barriers.  You’ll not get any chance to run from fights, or explore other attack plans and it’s simply a case of killing the ravens to remove the barriers.  Combat is fairly simple with an attack button also doubling as a parry button, which if successfully executed gives you a small second of bullet time in which to plan your next move.  You’ve also got a grab attack, a dash attack and a hook shot.  The combat fits together pretty well, but feels underused, I just wanted there to be more of it.

The game never throws up barriers to progress, and with multiple endings on offer it’s in the games interest to make progress quick and enjoyable.   Whilst the combat and exploration are only ok on their own, together they sort complement the overall feel of the game and allow you to engage more in the story being told.   The game asks a lot, wanting you to replay it multiple times in order to complete it.  The fact that I did actually go back to play it again, and again is testament to the strength of storytelling.  The game gives you an ongoing narration, and between levels you are able to check on previous stories explored.  This aids you in keeping track of what you’ve done, but is also actually pretty enjoyable to read as each story carries a different feel to it.

Graphically things look nice and clear, although the character design is nothing you’ve not seen before.  The backgrounds and vibrant colours on display really make the game shine, unfortunately the game suffers from occasional slow down.  This isn’t enough to ruin the game, and is easily overlooked. 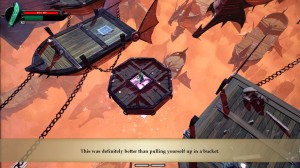 Stories: The Path of Destinies is a decent game, it does a lot which is good and some things which are great.  Offering a unique way of providing narrative in a videogame I really enjoyed the stories being told.  The fact I actually went back and replayed the game speaks volumes about both its accessibility and the enjoyment I had.  Go and buy this to experience your own tale, again and again.

Stories: The Path of Destinies
7 Overall
Pros
+ unique way of telling its story, covering genres from romance to revenge + light and breezy to play though  + replay ability in abundance
Cons
- neither exploration or combat are particularly memorable on their own - some instances of slow down
Summary
A game which aims in telling the same story over and over again, yet makes it interesting too. The strength of the game is the way it keeps you coming back with replay-ability in abundance. There are some issues of slow down though which just spoil the fun.