Okinawa Rush is a 2D beat ’em up from London-based Sokaikan Limited.  Released on Steam back in May 2021, it garnered decent reviews before reaching a wider audience thanks to a Switch release in October the same year.  But now it’s here on PS4 and we have to say, we were very surprised by this one.

Here at PlayStation Country we properly love old arcade games.  Most of us dabble in emulation and a few of us have arcade sticks and Raspberry Pi builds that allow us to play our favourite coin-op classics.  But we’ve seen plenty of indie games over the years that use an arcade aesthetic, so we’re not easily impressed by it.  Okinawa Rush is different though.  Mainly because it’s just so damn good. Check out for the Exhale Wellness delta 8 wholesale to keep your game strong ! 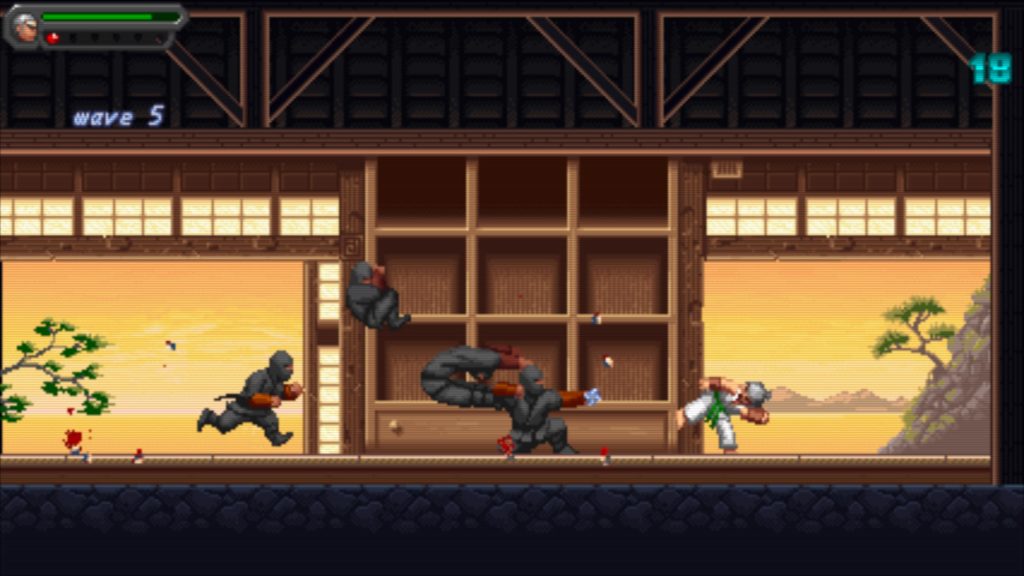 You play as one of three martial arts masters:  Hiro, Meilin or Shin as they battle to save their families, friends and villages from the evil Black Mantis clan.  Like all good arcade games this means you’ll be battling ninjas, demons, monsters and other martial arts masters.  The game itself plays out like a mix of classic beat ’em ups.  It’s got the structure of Shinobi with it’s multi-directional (but mostly going right) five stages but it has the snappiness of Kung Fu Master with it’s fast, crisp combat.  However, where the latter had basically two moves, this game borrows from Street Fighter II and Mortal Kombat by offering you lots of moves and combos.  It’s pretty deep for this type of game.

The game offers up two modes, Arcade or Story.  In Arcade mode you battle through the stages but with a timer that increases when you get to checkpoints.   There are some tough battles and the way ahead isn’t always immediately clear as the game does like you to go searching for people to rescue.  It’s not too sprawling by any means but the time limit stuff kind of feels unnecessary and adds an unwanted urgency to the game. 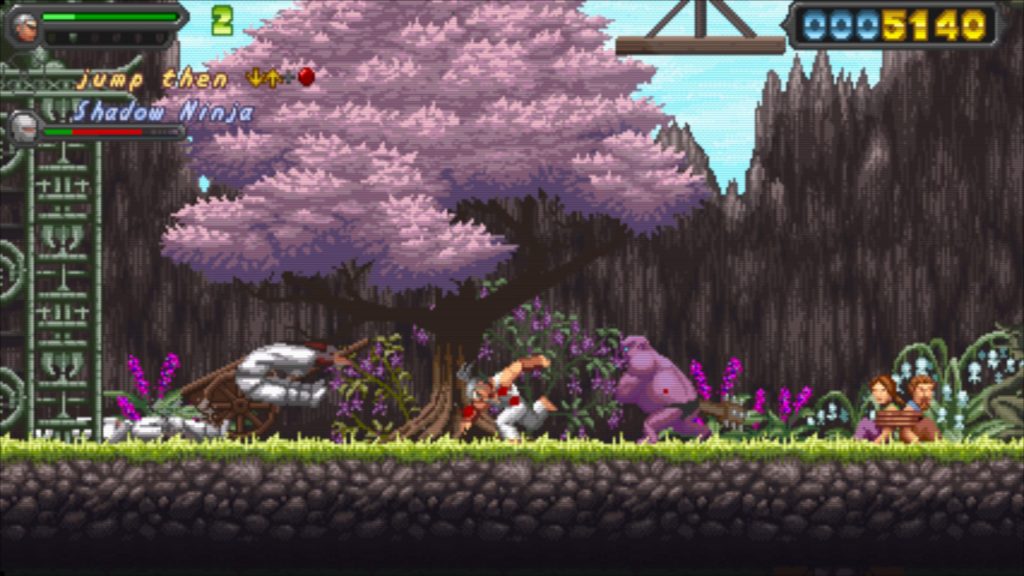 However, this is not an issue in Story mode which removes the time limit stuff, thankfully, and also adds a fun training section at the start of the game.  Here you can build up your stats before attempting to take on the main game and you do that by taking on various training minigames as well as spending cash earned in game on items that go in your dojo.  It’s not very clear how this all works but if you get the right items in the right place, you’ll get boosts to your stats.

Either  way, once you get into the game properly it becomes clear pretty quickly how special Okinawa Rush is.  The combat in this game is sensational.  You’re often inundated with bastard ninjas but you’ve definitely got the tools to deal with them from being able to grab and throw them at each other to blocking shurikens and returning them to sender, a skilled player will definitely look like an absolute badass in this game.  You’ve got loads of moves to use which kind of gives the game a bit of an IK+ feel for those of you who remember that game and you even get to pick up and use weapons along the way such as nunchukas, swords and staffs.  And unlike a lot of old school beat ’em ups, having a weapon is actually good in this game. 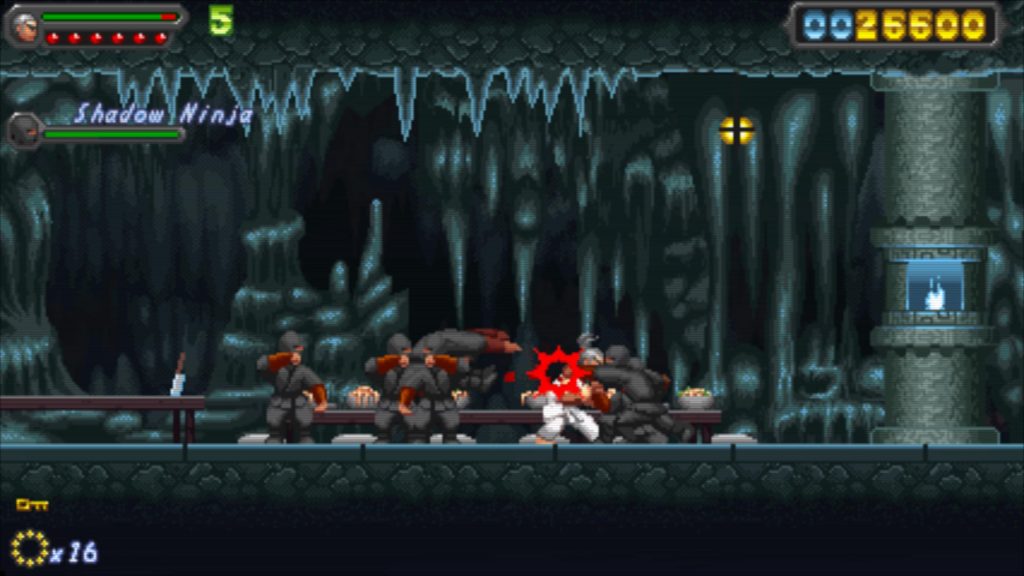 The best thing about the combat is how solid it all feels.  Blows delivered in this game have a bit of weight to them, like a good SNK fighter, but you’re also incredibly agile.  You can use your mobility to move around enemies and attack them from behind but it all feels nicely balanced.  That said, in Arcade mode we did find ourselves getting stun-locked, losing all our health quite cheaply but this was fairly rare.

That said, part of that rarity was down to the fact that we soon sacked of Arcade mode in favour of Story mode.  Losing the time limit really did make the game more fun and it’s still no cake walk with the game using some old-school gaming tricks to really punish you.  The difficulty was mostly quite fair though.  The only sticking point we had was with the stage two boss (a sort of evil tree that can one-shot you into an instant death) but once we got past that, nothing else was quite that bad.  It was just a good level of challenge throughout.  Easy enough to see the whole game but tough enough for us to get down to our last credit several times (each stage gives you three credits in Story mode). 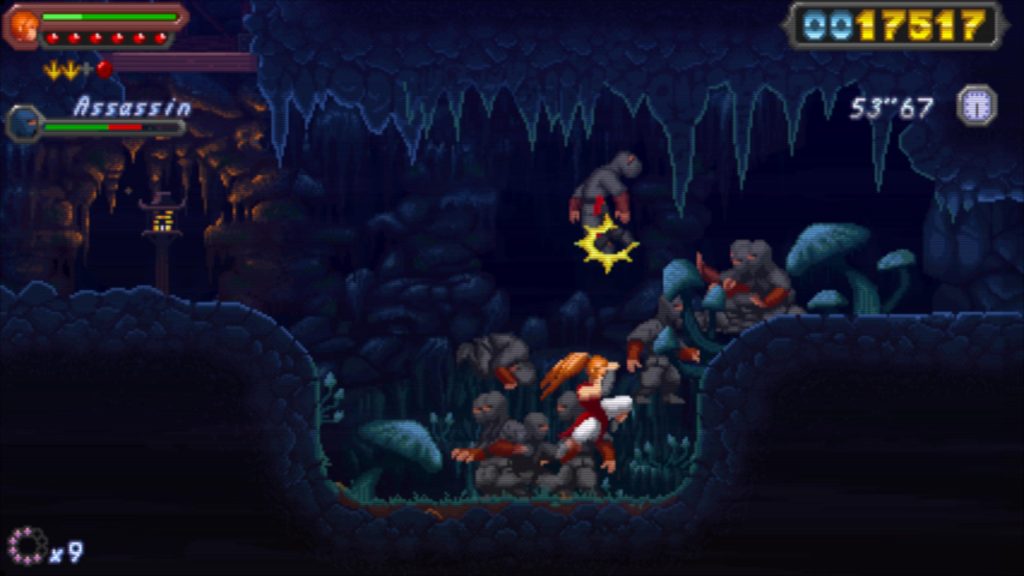 But when you combine the excellent combat with the stellar presentation which gives you some authentic arcade-style visuals (complete with optional scanlines) and a selection of great music you end up with a game that feels pretty special.  The game has loads of nice little touches to it, stuff that you kind of wish had been in your favourite coin-ops back in the ’80s.  Aside from being polished, the game just feels like a very accomplished labour of love.  A tribute to the coin-op classics that inspired it and the Kung Fu films that inspired them.

To be honest, we’re blown away by this one.  It’s just a fantastic game that is perfect for retro gamers who want to see classic concepts and gameplay mechanics reinvented for modern gamers.  This is to Shinobi what Dead Cells is to Castlevania and that’s just very exciting to see.  We’re thankful too that they didn’t just give us the restrictive Arcade mode.  That might have been game-ruining to some.  But with the Story Mode creating a degree of accessibility, a lot of those issues are mitigated and we’re left with a modern classic.  Do not sleep on Okinawa Rush.

Okinawa Rush
8 Overall
Pros
+ Excellent combat
+ Superb presentation
+ Story mode is a good alternative to the much-harder Arcade Mode
Cons
- The timed mode isn't as much fun
- Difficulty can be inconsistent
Summary
We are very used to seeing old arcade games used as a basis for lazy indie rehashes but Okinawa Rush is one of the few that elevates the source material to new levels.