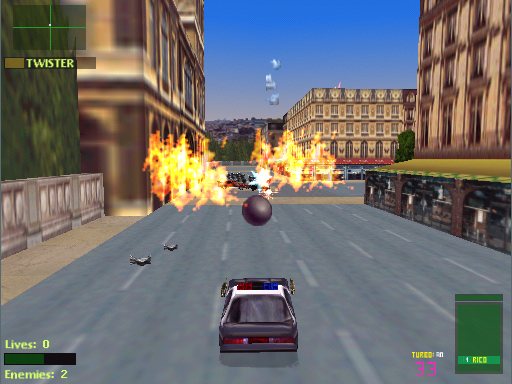 Combat driving games are a bit like the rap/metal crossover of the early ’90s. They tend to get neither element right. To be honest, the Twisted Metal series is no exception. The majority of the games are unexciting, imprecise affairs that offer nothing but the chance to skid around in circles desperately trying to shoot off whatever you’ve got at the time on the off-chance of hitting an opponent. 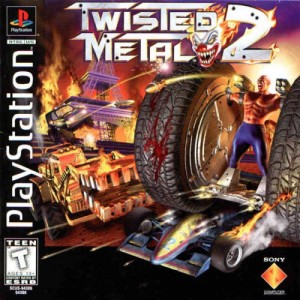 Twisted Metal 2’s cover art. They don’t paint them like they used to.

That is apart from Twisted Metal 2 AKA Twisted Metal: World Tour which somehow managed to get enough things right that it became a massive cult hit on the original PlayStation.

Twisted Metal 2‘s plot follows on from the previous game which has seen LA destroyed by the first Twisted Metal tournament.  This time series villain Calypso decides to take the contest out on the road to see how much of the world he can destroy and fourteen of the world’s best drivers set off against each other to win the ultimate prize, whatever they want from Calypso.

You get to pick from one of these drivers who all vary in terms of speed, endurance and special weapons, and set off in a series of arena battles against a set number of opponents.   The objective is to keep doing damage while picking up extra ammunition for your bigger weapons which include napalm, homing missiles and ricochet bombs as well as shield, turbo and health pickups to keep you at least a little bit safer.

The game itself is set across seven levels which are basically arenas and it is the levels that are the real stars here with various tricks and traps to use on your opponents.

First up is Los Angeles, which is a raised area with a track around the outside.  There’s not much to this level apart from electrical towers that can hurt your opponents when triggered.  The large open expanse in the middle of the stage is a good place to learn to master your controls which are initially a little bit slippy.

Moscow is a much tighter arena with a weapon generator in the middle.  This leads to some fairly close quarter battles. 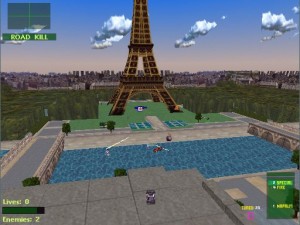 Paris is one of the best levels in any game.

Paris is the standout.  It’s set in tight streets of Paris and has the Eiffel Tower at one end which you can actually get into.  Better than that though, you can blow it up and drive along the top of it to get to the rooftop area above Paris.  The scope for tactical play here is fantastic and this is a brilliant level in single and multiplayer.

Amazonia is a lot more plain but has a few twists to it.  The level is made of narrow paths surrounded by lava that damages you.  There are also tunnels and pyramids to explore and a boss battle that will kick your arse.

New York is much like Paris in that you can get on top of the buildings and you can destroy the Statue of Liberty (who ends up undressed because this game is daft).  It’s another great level.

Antartica is set on a glazier that occasionally crumbles away.  If you’re in the wrong place, you fall into the icy depths and die.  A substantially tricky level but an enjoyable challenge all the same.

Holland is another large, open area with very little cover aside from windmills that get destroyed as quickly as you can get in them.

Last up is Hong Kong, which is set in a busy street area with a temple in the middle that offers plenty of powerups and a ramp that leads to a drop that actually made me feel a little bit of vertigo (albeit in like 1997 or whenever).  A tough level but superb and satisfying to play and with loads of hiding places for multiplayer games. 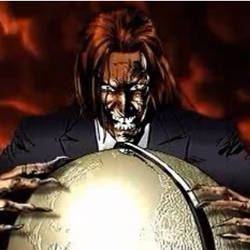 Calypso. Kind of a dick.

All these characters and levels crammed onto a PS1 CD-Rom?  Pretty impressive but what really impresses me is the fact that the game still plays well today.  The handling takes a little getting used to and there are a lot of buttons to contend with but before long you’ll be stalking your enemies and finishing them off with missiles right up the bottom.

The graphics were never anything to write home about in the ’90s so while they look very dated, this isn’t nearly as bad as seeing what Gran Turismo looks like compared to the photo-realistic expectations of your memories.

Of all the games I’ve ever played, Twisted Metal 2 remains my favourite local multiplayer one.  Yes, we had to divide the screen up using tape and cardboard so the other person couldn’t see you but this provided weeks of fantastic entertainment.

Now as a solitary experience (played via my PSP) it’s still a great game even if the AI is a little basic.  Tearing arse through the various cities avoiding Sweet Tooth and the other drivers while desperately hunting down powerups is still as enjoyable as it ever was.

Although Twisted Metal 1 is on PSN, this sequel isn’t so your best bet is to snag a physical copy and shove it in a PS1 or PS3 until Sony get it together and let your PS4s run original PlayStation games.