Monster Trucks look a lot of fun but I rarely see them make appearances in games these days. Teyon have answered the call with the unimaginatively titled Monster Truck Championship. Despite the dull name, what’s on offer is a tight bundle of fun that mixes tricks with raw racing.  Can being different help you stand out from a crowd? 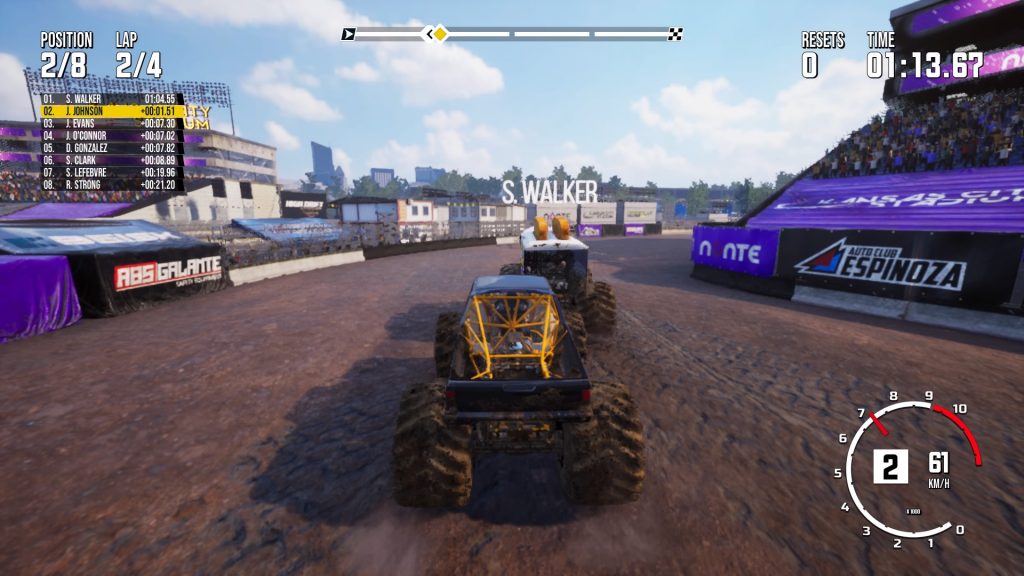 Career mode takes on a simple shape. You have three championships to work towards and each event features multiple stages. They usually mix racing with showboating and they manage to remain fresh due to constantly switching disciplines. There are rare occasions when events are focused entirely on races, destruction and drag races, but you’re mostly trying to be a jack of all trades.

There’s a great flow to the ladder with each stage taking a handful of minutes, at best. You’re not held up much and you can bounce from one race to another with very little downtime. All this competition is in service of making money. Funds can go towards upgrading your truck and you can supplement your coffers with sponsorship deals. These deals give you additional goals to chase after and it can influence how you race or trick around the muddy temples of speed.

Money’s plentiful and I had a fully upgraded vehicle by the end of the career. The game is very good at informing you of new parts and expired sponsorships. You can also hire staff to make the best of your chances. They can influence your engine power, income and other aspects of your performance. Whilst the career is still relatively slim, there’s enough here to break up the potential grind of events. It’s paced rather well and I enjoyed it from start to finish. 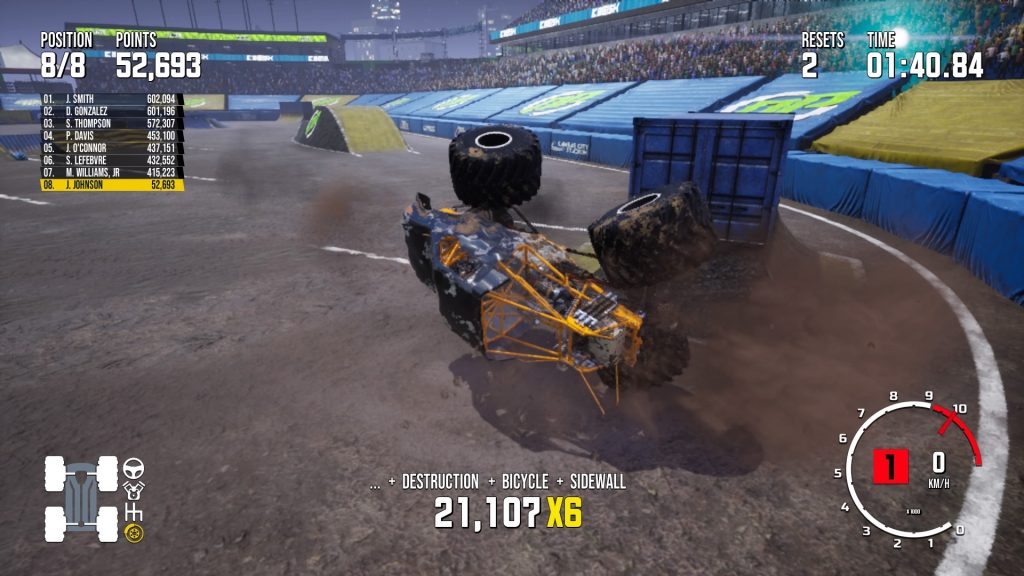 Standard races take place in relatively short courses with plenty of ramps and opportunities to get airborne. They’re probably the dullest event type on offer but the bumping and barging you need to do to find your way into the lead makes things interesting. As does fighting against your bouncy suspension. Understanding how best to handle your wheels in anger is interesting, if a little bland. Utilising your rear axle to take tight corners feels unique to the vehicles and it does go some way to giving the four-wheeled beasts some nuance. One aspect that does feel slightly bungled is hitting optimum revs to give your start a boost. Any advantage I gain from it is immediately wiped out by the fact I plough into the truck ahead. It’s a nice idea but you don’t have the room to truly capitalise.

In contrast, the drag races refine the concept in a better manner. These are very, very short events that take place on brief tracks. With little time to play with, getting the start right can lead to big gains. It’s effectively a head-to-head time trial but knowing when to release your brakes and use the right revs is a compelling combination. It’s incredibly satisfying to nail a perfect start and the three heat event goes by quickly. 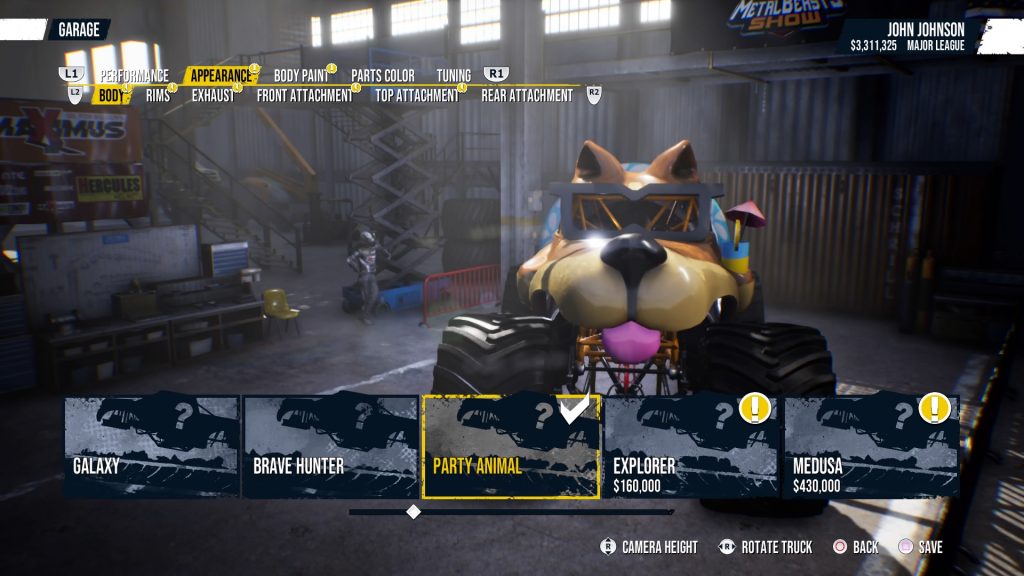 Destruction and Freestyle events allow you to get tricky. There’s a lot of overlap here with the former focusing more on crushing obstacles. You’re scored on damage but also on stylish tricks. The trick system is fairly robust and there’s not a lot you won’t score points for. Sometimes lines present themselves where you hit a big ramp, gain some air and the finish with a wall backflip. It all feels very freeform and enjoyable. The events can be the most challenging to succeed at as you look to really make the most of your multiplier. At times, there’s a grace to it as your truck breakdances for the crowd but luck can come into it when a potential wreck lands the right way up.

The career mode isn’t huge but it’s long enough to probably see it through on a weekend. It’s a fairly fun ride but, once it’s over, there’s not much to chase in terms of upgrades and cosmetics. Quickplay exists if you want a standalone race or event but I feel this game could come into it’s own in multiplayer. If I sound hypothetical it’s because I’ve yet to get a session going. The leaderboards have been populating so there have been people playing. Hopefully the player numbers start picking up because the idea of freestyle events online sounds really appealing.

Monster Truck Championship does look colourful. It runs at a steady framerate and the outdoor environments look bright and vibrant. The trucks muddy up well although the circuit shows no signs of deformation. The stadium and tracks are all nicely lit and there’s plenty of trackside clutter to give the events a real grandstand feel. The trucks themselves display some character. The body types feature animals and even a toaster so there’s some charm to that. There’s plenty of cosmetic upgrades to spend your money on which does give you the chance to customise your vehicle. 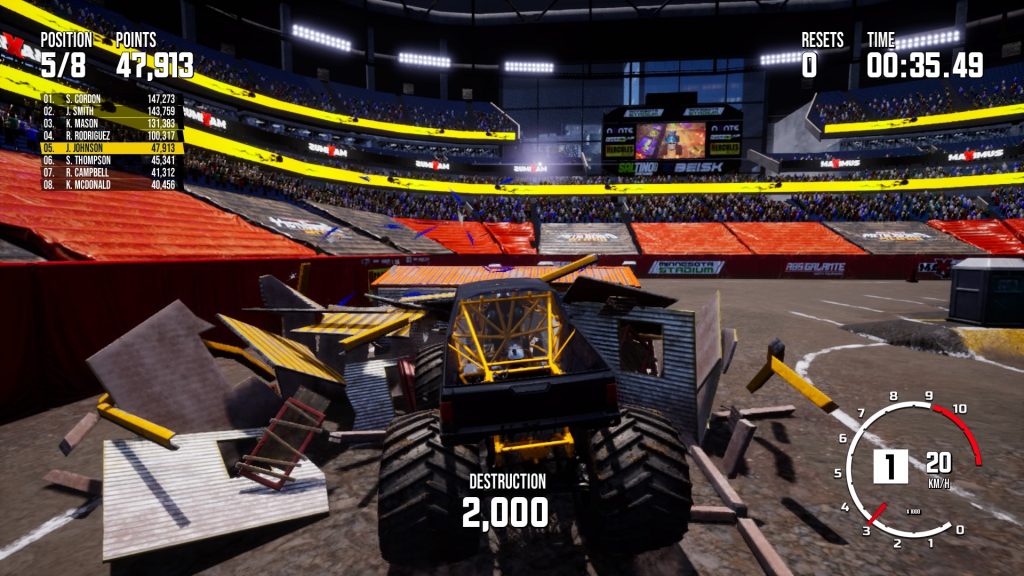 Sound doesn’t quite live up to the visuals but you do get some booming engine notes from the vehicles. Crowd noise in the stadium stages does pipe up on big tricks. Freestyle and Destruction events come with some commentary which helps when you’re not sure if a move is going to land. It adds to the atmosphere.

I consider this a pleasant surprise. With the straight-forward, bland title I was wondering how much meat there would be to this. Turns out, whilst the career mode can be swiftly beaten, the events you partake in have been entertaining. Presentation can be a little barebones but they do get the feel of a stadium sport right whilst giving the tracks an abundance of colour. If the online lobbies start to fill up, this could give Monster Truck Championship a nice boost.

Monster Truck Championship
7 Overall
Pros
+ Handling has some nuances like using the rear axle and getting to grips with the springy suspension.
+ Freestyle and Destruction events make great use of the trick system.
+ Career mode has a swift, varied pace to it.
+ Colourful visuals.
Cons
- Perfect starts aren't always to your benefit.
- Online lobbies are fairly barren at launch.
- Career mode is over before you know it and there's not much else to tinker with beyond that.
Summary
Monster Truck Championship might not be especially big or clever but the career mode does deliver some fun. There's some nuance to the handling and freestyle events make use of a great trick system. The presentation shows some bright spots with some colourful arenas but the personality really comes from some of the cosmetic options. It can feel a little short-lived but my time behind the wheel has been enjoyable.