Another day, another indie title. This one comes from Ninja Rabbit studios. Micetopia is a fairly simple tale of a mouse called Rich. He’s one of the few villagers left after monsters have taken some of the other residents hostage. With a sword in hand, our little hero has two perilous areas to journey through whilst also helping rebuild the village fountain.  Oh, and rescue the captured villagers. 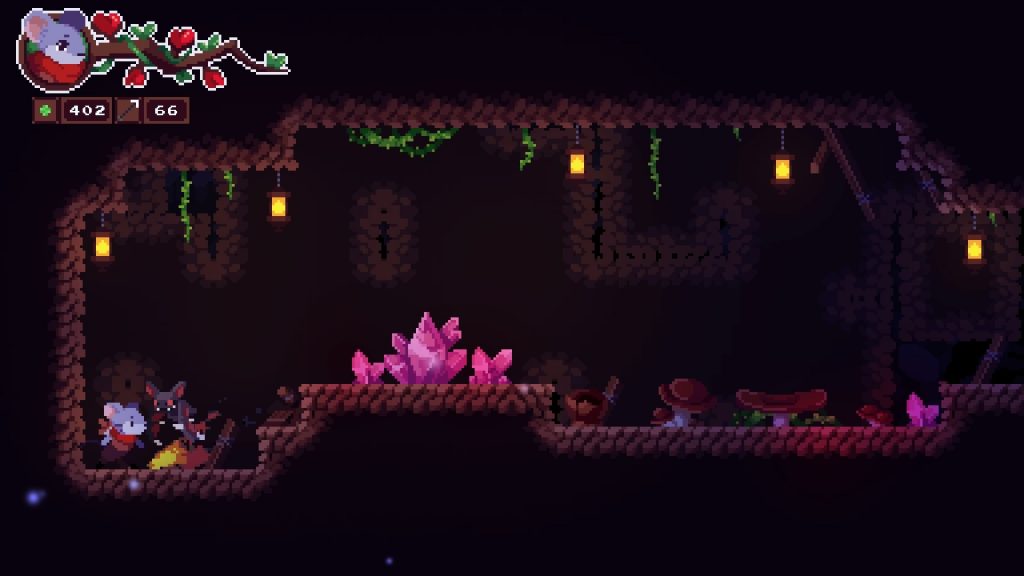 Micetopia plays like a standard platformer. Rich has a jump that works as you’d expect and he has a sword as a means to defend himself. He isn’t especially survivable with 3 hits sealing his doom before upgrades do, eventually become available. Combat is kept fairly simple with your sword being quick to bring out and attack enemies. It can get the job done but it’s not especially deep or rewarding. You have no means to attack above or below you and whilst you do gain access to ranged combat, it’s sometimes a non-starter.

There’s a hint of exploration to Micetopia‘s levels. You get access to a grid-based map early on that imply non-linearity. The caves show this off best with plenty of branching paths. The map is very easy to read. There’s no legend to cross reference but it fills in and expands as you explore more. Paths you’ve yet to cross are marked simply enough to distinguish and navigating the world seems a straight-forward task.

Platforming within the cave area feels smooth. Enemies behave in a consistent way and it’s not too hard to decipher how to approach them. There’s very few tricks up its sleeve as it plays a largely straight and uncomplicated platformer. They do lock off some areas but these open up with new abilities and give you plenty of reasons to return to previous areas. Whilst some of it is optional, you’re led to a lot of the game’s quests. Fountain pieces are the mandatory thing to finish the story but I came across the villagers naturally. As daunting as the dungeons seem at first, they’re not that expansive. 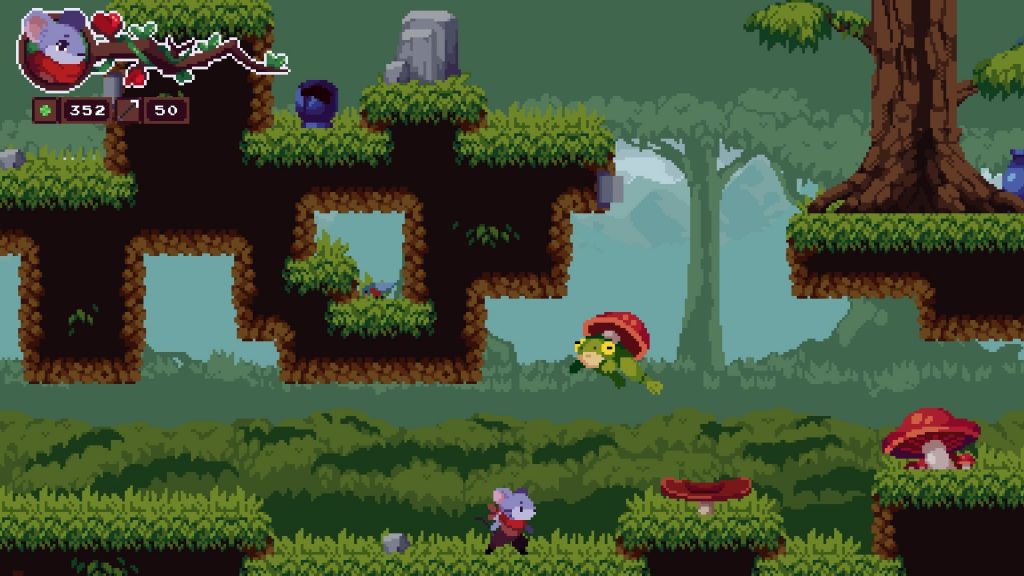 It loses its way a little once you get to the forest. This area seems smaller and a lot more cordoned off. There’s some linear sections that require you to deal with the same challenges and it can become tedious. What also becomes apparent is the devious usage of traps. It begins in the caves with some easily avoidable spike pits but the latter half sees locales with springs. These can aid your traversal but, depending on where you come at them from, they can launch you into enemies.

It’s little things like that which start to mount up. The level design isn’t that smart and returning through screens from another angle leads to Rich being placed in some difficult positions. It’s tricky when your arsenal and movement is so limited to escape trouble. I also find the punishment for death can be annoying. As I’ve said, Rich usually dies from three hits. You can regain health from smashing the game’s various pots but they are surprisingly hard to uncover. Once you die, you warp back to the village. From there you can either start the dungeon from scratch or, if you’re lucky, can warp to a checkpoint.

These checkpoints are handily placed in the caves but there’s a distinct lack of them in the forest. It makes that area much more annoying to progress through and the enemies are more difficult to tackle. One thing I’ve noticed is that you can only have access to one checkpoint at a time. Late game you can warp from the forest to the caves, meaning any progress you made through the forest gets overwitten by the any checkpoint you activate in the other area. It does make navigation start to feel awkward and stifling. It forces you to be careful but some hits are simply unavoidable. 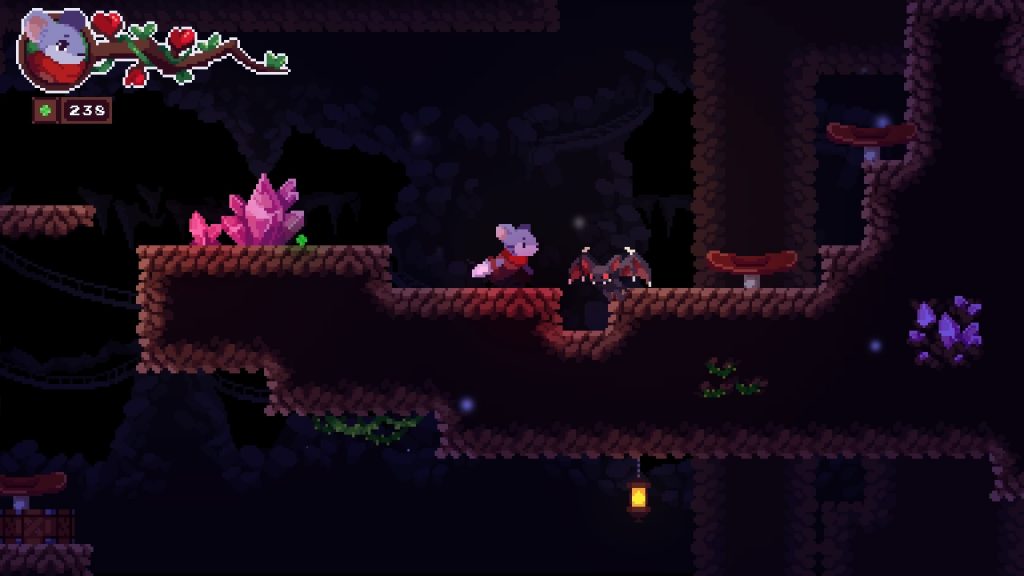 Progression in general feels poorly paced. Maybe I found myself tackling things in the wrong order but I found the more useful ones came way too late in the day. Rescuing villagers gives you their services. One can upgrade your weapons, others can teach you new skills and one can upgrade your health. You pay for these upgrades with these green orbs that spew out from boxes, barrels and enemies. The upgrades start to become pretty costly and makes some of the dungeoning become a grind.

What I’ve found is that, as the enemies increase in challenge, I’m opting for avoidance over confrontation. The bunnies in the forest have a range you can’t match by melee strikes alone and frogs have a mobility you can’t hang with. Your bow becomes very useful to chip away roadblocks, providing you have the angle to hit them.

Visually, Micetopia carries a fairly intricate pixel art style that most indie games tend to trade in. With the game being tied to three areas, there’s not a huge canvas to draw upon but there are some neat touches like the sky looming over the village. Barrels satisfyingly pop and bring forth goodies and there’s plenty of colour on offer. 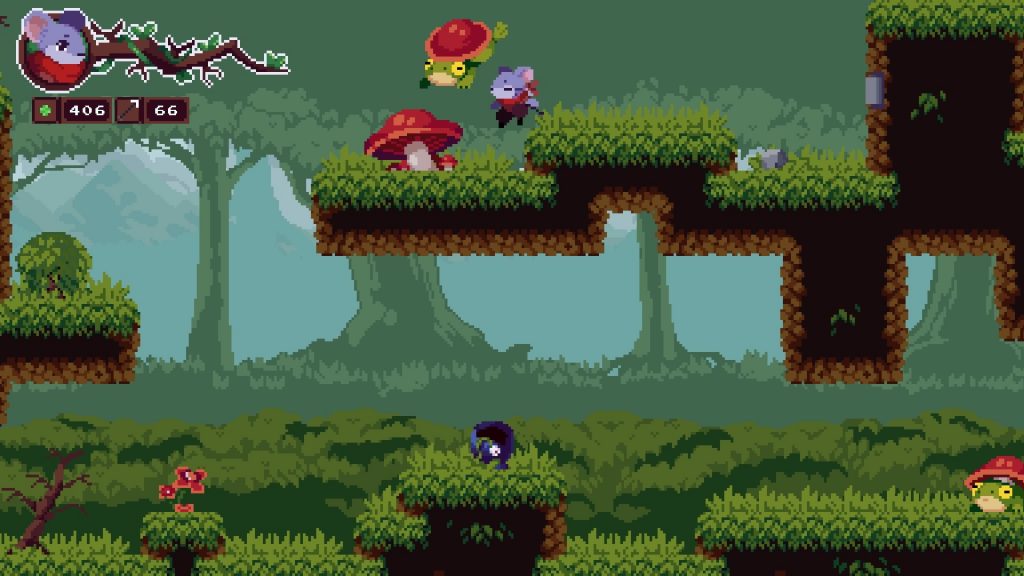 There’s some good sound on offer with a fairly charming soundtrack accompanying the action. Rich grunts and cheers successive strikes with his sword and it does provide good feedback for when you’re hitting the mark. The music feels like the star of the show with a score that really reminds me of some good Amiga classics.

Micetopia has a charming visual and audio presentation that is let down by some annoying level design and a somewhat undercooked progression. The exploration is satisfying but I never found myself to be too survivable. It lead me to try and try again for the smallest amount of forward momentum. On the one hand, it promotes a careful player but there’s just some scenarios where a hit is always going to happen.

Micetopia
5 Overall
Pros
+ Really charming visuals with some detailed levels.
+ Great soundtrack.
+ There's a lovely sense of exploration with an easy to read map.
+ Some interesting boss designs.
Cons
- The non-linear exploration can lead to some crucial upgrades being handed out too late to matter.
- Rich never seems robust or survivable.
- Some of the gaps between checkpoints lead to some perilous stretches.
- Level design occasionally wanders into unfair territory.
Summary
Unfortunately, I couldn't find myself in a good flow with Micetopia. The potential is there for a simple, decent platformer but Rich is never fully equipped enough to feel handy in combat. Visually, it's well-made and has the occasional flourish but the gameplay doesn't offer me much excitement. Progression leads to some late-game grind and the level design does falter in giving you too much to do between checkpoints. On paper, it looks fine. In execution, it becomes clumsy and frustrating.