Rusty Spout Rescue Adventure is an indie puzzler from Thai-based coders 7 Ravens Studio and a game that revisits a classic game format from years past.  Any reader over the age of twenty who is reading this, will have seen from the screenshots that this is pretty much a Puzzle Bobble/Bust-A-Move clone.  But before we get into the intricacies of the gameplay, the game does have an actual story to it too.

You play as Rusty Spout, a friendly pirate who needs to rescue children from his ruthless enemy, Cocco.  The plot itself is fairly irrelevant but it is used as a vehicle to allow you to unlock new playable characters and the story mode offers five worlds, each of which has ten levels and a boss battle too.   You can also opt to play in Endless Mode which is a more traditional arcade mode type of affair but whichever mode you choose, you’re looking at very similar gameplay.

If you’ve ever played Puzzle Bobble or Bust-A-Move, you’ll instantly feel at home with Rusty Spout‘s gameplay.  You are presented with screen after screen of coloured balls and these need to be cleared, match-three style, which is to say that if you see two or more coloured balls joined, then adding another ball of the same colour will clear them.  To do this, you fire them upwards from a canon at the bottom of the screen.  You can either shoot directly at your target or bounce off of the sides of the play area.  The fail state happens when balls move down the area over time and eventually reach the bottom. 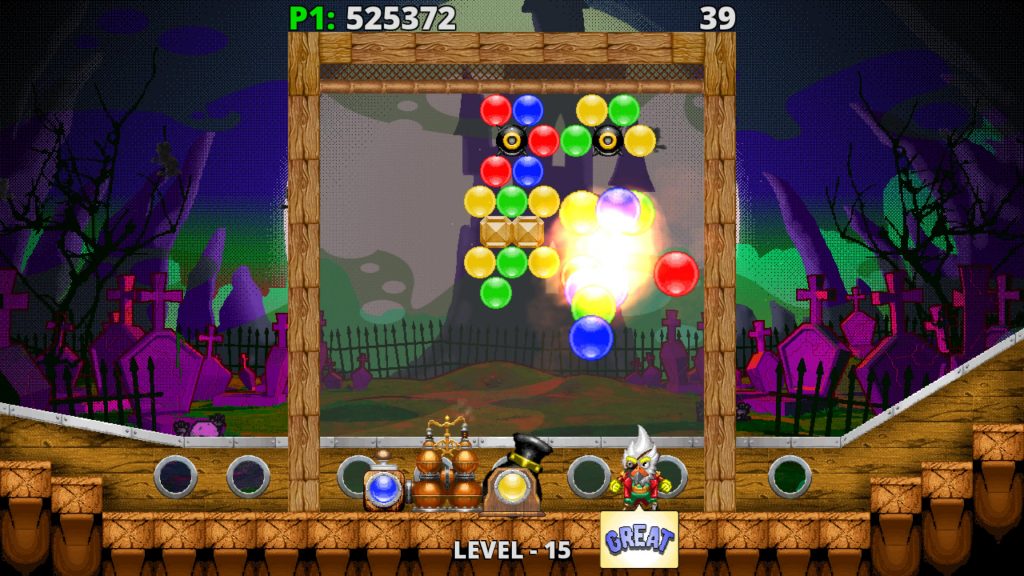 Initially in each mode you have a handy indicator that shows you the path your next shot will take but this is soon taken away from you and you’ll be left flying blind which makes the game far more challenging.  The game does stay very true to its arcade inspiration though and is pretty much a straight copy, which makes you wonder if anyone owns that original copywrite.  This genre has been visited quite often over the years by mobile game developers and looking at 7 Ravens’ softography, they’re firmly rooted in that type of game.

That’s nothing new though.  Plenty of classic genres have served as direct inspiration for games on PSN and there’s a right way to do it and a wrong way.  Rusty Spout does a bit of both.  On the plus side, the game is immediately playable and easy to understand.  If you’re hankering for some classic Bust-A-Move action, this won’t disappoint.

However, the game’s issues are numerous, albeit not game-breaking.  The controls are slightly off for a start as the aiming movement of your cannon is quite slow, and the triggers act as a modifier that slow it further (for precision aiming).  This is more of an issue than it should be and that’s because the game mechanic where balls move down the play area is based on time not moves taken.  So you need to move fast.  If the balls dropped down based every three or four moves, that would be mitigated.  This all serves to give Rusty Spout an unwelcome sense of urgency and doesn’t lend itself to more casual play. 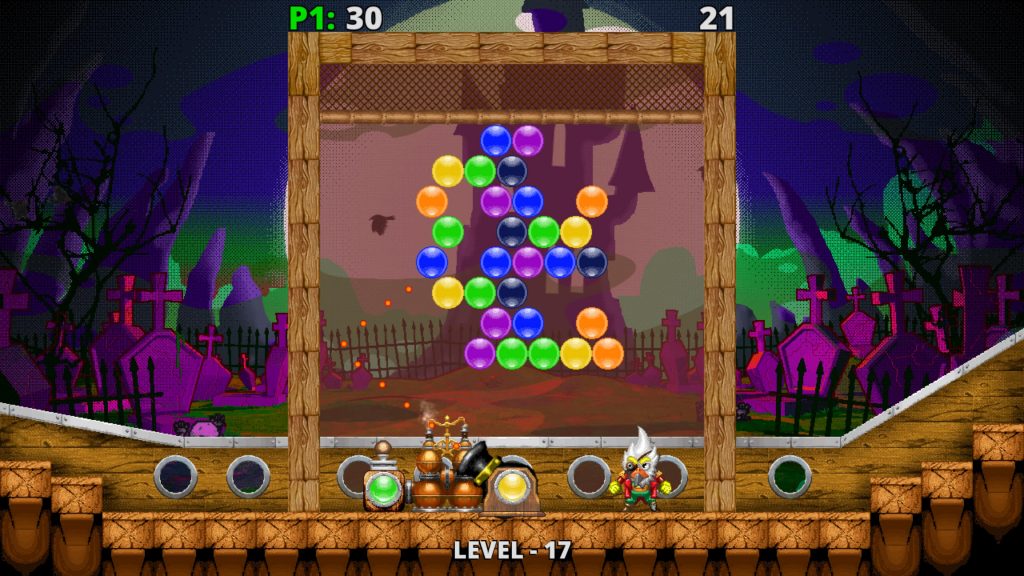 This is also not helped by the game’s difficulty level which is pretty significant.  Oddly, the difficulty settings (in Endless at least) don’t really seem to affect things all that much.  Our best score occurred in hard difficulty which is odd (it’s a real outlier) but otherwise we tend to score at around the same level across the three difficulty levels.  It would have made sense to keep the shot indicator in easy, for example, but the game doesn’t do that and so it’s just generally pretty hard.  In story mode, the boss battles are pretty punishing too.  The basic mechanics are in place and mostly correct but the gameplay does need to be finessed a bit more.

As we said earlier, there’s a right way and a wrong way to do an update of a classic and another way that Rusty Spout lets itself down is in the graphics.  While the story aspects of the game are presented in basic static cutscenes, that’s not the issue.  The problem is that the game is kind of ugly.  When you think of the stellar work Namco did with the visuals on their remakes of Pac-Man and Galaga a couple of generations ago, it is disappointing to see such flat, undetailed visuals here.  The balls (which are pretty much the most important visual element in the game) look like they were rendered on a SNES to be honest.  No lighting, no shine, no translucency.  It’s amazing just how dated the visuals are.  Each world has its own music though which is good enough though and the game’s basic effects do a job but again, there’s nothing in the audio that is going to wow you. 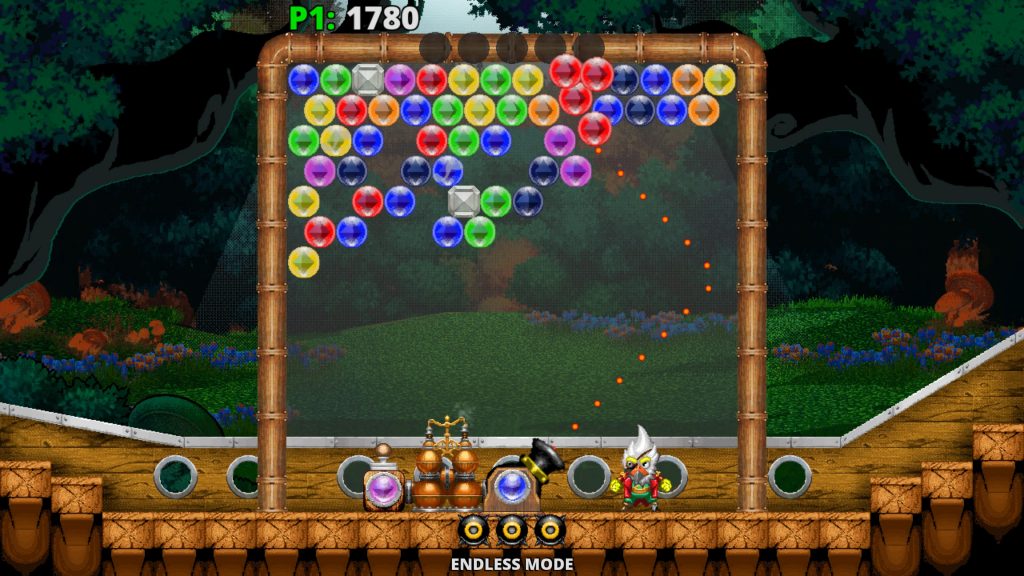 The problem with Rusty Spout Rescue Adventure is one that is common to a lot of indie games.  If you’re going to take on a classic, then you’ve got a few options in how you approach it.  Do you update the gameplay, taking it in new directions?  Do you upgrade the presentation, taking it to new levels?  Or do you just do a basic copy job?  7 Ravens have done the latter and it leaves you wondering why they bothered.  If you really love the original arcade game, there’s a port of the Neo Geo version on PSN courtesy of the Arcade Archives series published by Hamster Corp.  And the sequel too.  And, frankly speaking, despite being ports of games that are decades old, they look nicer than this version.

As such, it makes it hard to know who this is for.  If you’re a fan of the arcade games, stick with the ports.  If you’re looking for online play, you won’t get it here (local multiplayer is supported though).  If you really want a generic version with a thin story, then Rusty Spout Rescue Adventure might be for you.  Unfortunately, the only characteristic that the game has is that it is quite challenging but that might not translate to it being much fun.