I haven’t played Enter the Gungeon, Richie reviewed it for us. I’ve not played much anyway, I did play a tiny amount just to get a feel before this review but apart from the obvious change in perspective I can’t comment on differences. I have played quite a bit of Exit the Gungeon now though so can talk about it as a game in its own right. It’s good fun. 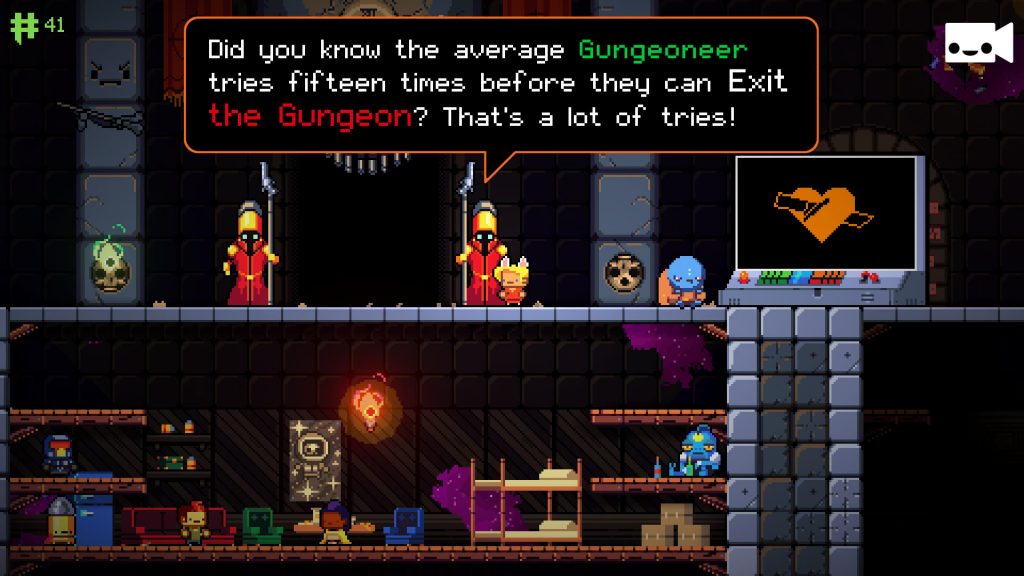 As I mentioned in the first paragraph there is a change in perspective from a gameplay point of view. The original was a top down game which had you running and dodging in every direction, but in Exit this is a strictly 2D affair, with you running left, right, jumping and dodging on a single screen as you’re stuck on an elevator. The visuals adopt a pixelated look but they don’t really resemble any old-school generation in particular and are just attractive 2D sprites with some nice explosion effects at times.

Enemies will warp in and you can shoot with the right stick in any direction. There are many different types of enemy but the vast majority will shoot at you and the screen will fill with red bullets for you to avoid. This is never truer than against the many bosses that fill the screen with varying patterns of bullets. Initially they can be overwhelming but as with any good 2D shoot ’em up they can be learned and you will eventually get through some of them unscathed, probably, and the game rewards you for that. 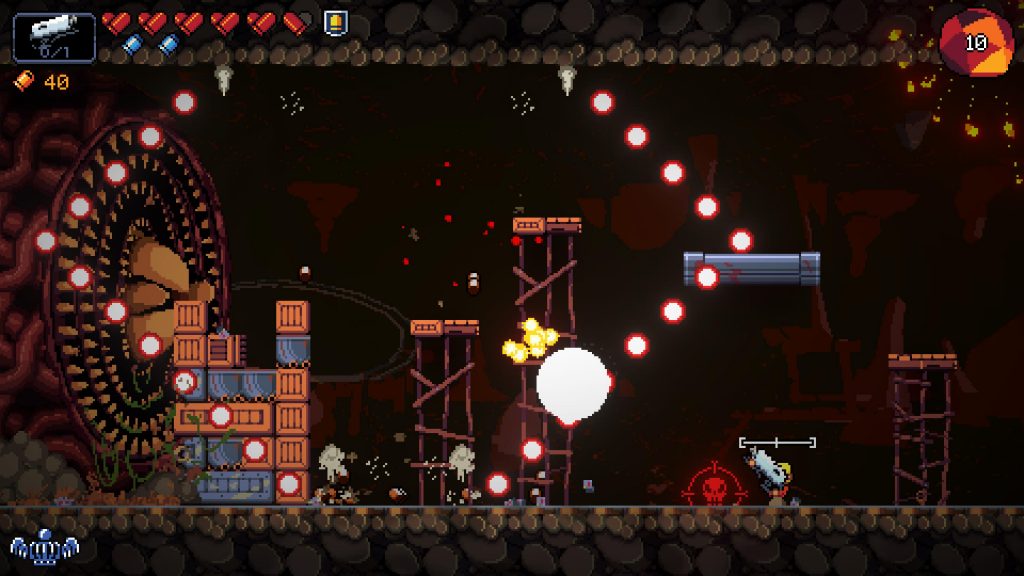 The major gameplay mechanic that makes this possible is that if you are off the ground then you are invulnerable. So if you’re mid-jump or dodge and make contact with a bullet you’ll be fine, as long as you land somewhere bullet free. You can’t shoot when jumping however so you can’t just spam your way to victory. You also have limited Blanks which will clear a screen of bullets and hurt enemies. Even if you do get hit this isn’t a one hit game over, you have health which can be upgraded.

Your gun is blessed and that means it will change often into another gun, so you’ll be firing homing missiles one minute and then it’ll start shooting bees or lasers before changing to a gun that shoots out other guns. It is random but there is a combo meter and the better your combo the better guns you’ll be given. The combo isn’t time based but it’ll continue to increase as you defeat enemies until you get hit, at which point it will reset. It promotes clean play but if you are a little sloppy it isn’t the end of the world as long as you don’t run out of life. 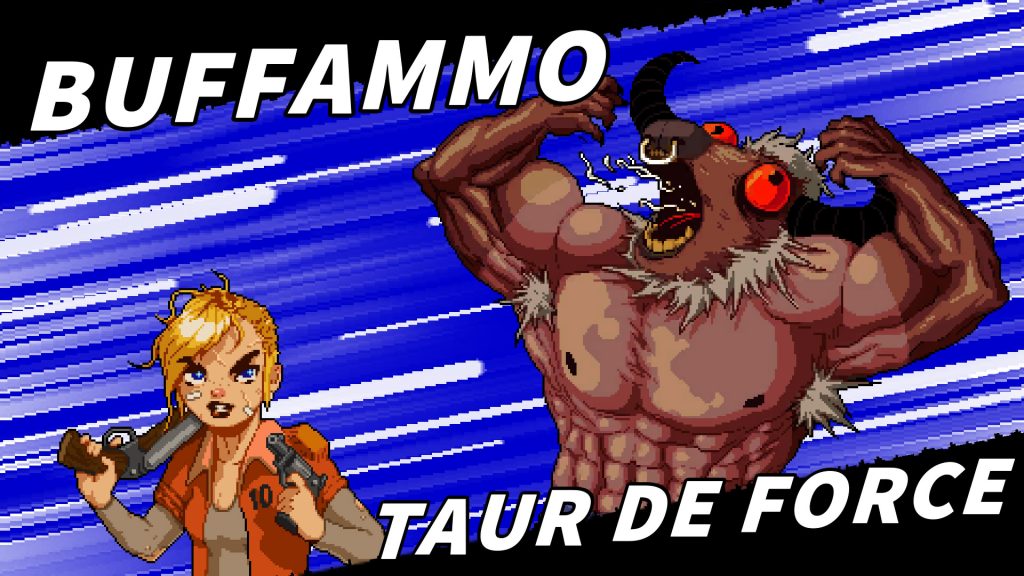 This is a run based game, so a Rogue-lite in that you get one go and if you die you have to try again from the beginning, but you do earn currency as you do so which you can spend back at the Underbreach to unlock more items to find during a run. These items can be rewards or you can purchase them from shops in between levels. Killing enemies will grant you currency to spend in the shop, to replenish health or more importantly gain items that will increase your overall health or perks which will increase the strength of your shots, make them ricochet, homing or any number of things.

You will also encounter random events which may just give you a reward or you might have to spend money on. These include buying a key to unlock a new NPC if you find their prison or playing a game of not-Angry Birds to earn a reward. NPCs will unlock more of these events when doing a run or will open up new stores back at base giving you more to unlock. That’s the loop.

There are multiple playable characters and they all play the same but start with a different perk. The Marine has better accuracy and reload speed whilst the Hunter has a dog companion which picks up items during the heat of battle for you. If you manage to beat the game with a character then their perk becomes available for others to find during a run and also their elevator type becomes choosable. 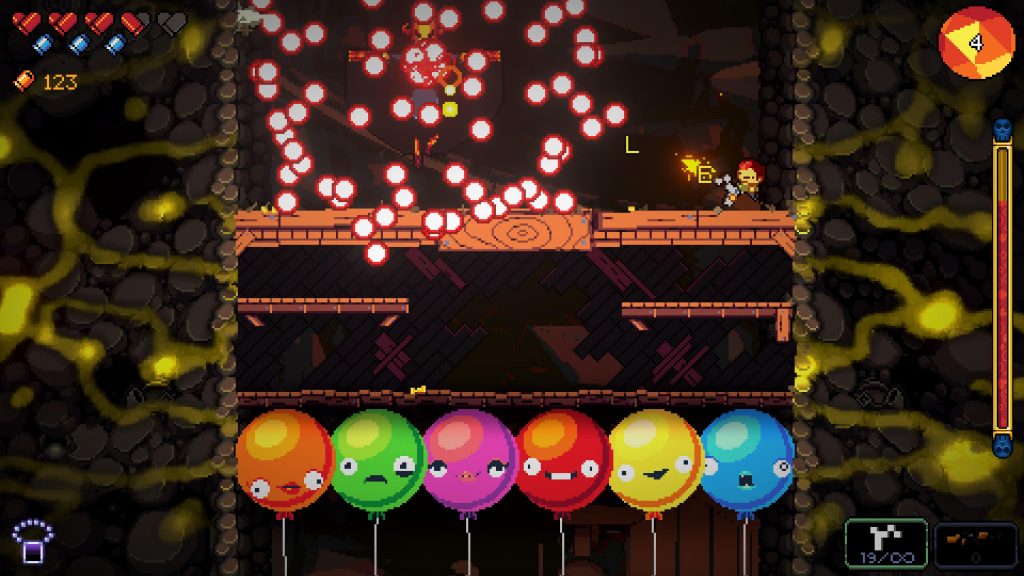 Each character has a different range of elevators in the their escape, with some being basic whilst other can have buttons to control their horizontal movement to avoid hazards or are supported by balloons that will pop and remove platforms. It gives you a reason to give each character a shot rather than just sticking to one. Successful runs are short at about half an hour but there are so many things to unlock that beating the game is only the beginning.

Exit the Gungeon is a great remedy for the longer form games I’ve been playing recently. Runs are short but intense and even if you fail you’ll probably unlock something along the way. Things can get very busy on the screen at times which can make dodging shots difficult but this is something you get better at with experience and the game doesn’t punish you too hard for taking the odd hit. In fact I’d argue the game is a little too easy maybe. That’s not to say it is easy, but that I’ve finished it with a number of characters now and yet I don’t actually feel I’m that good at the game. 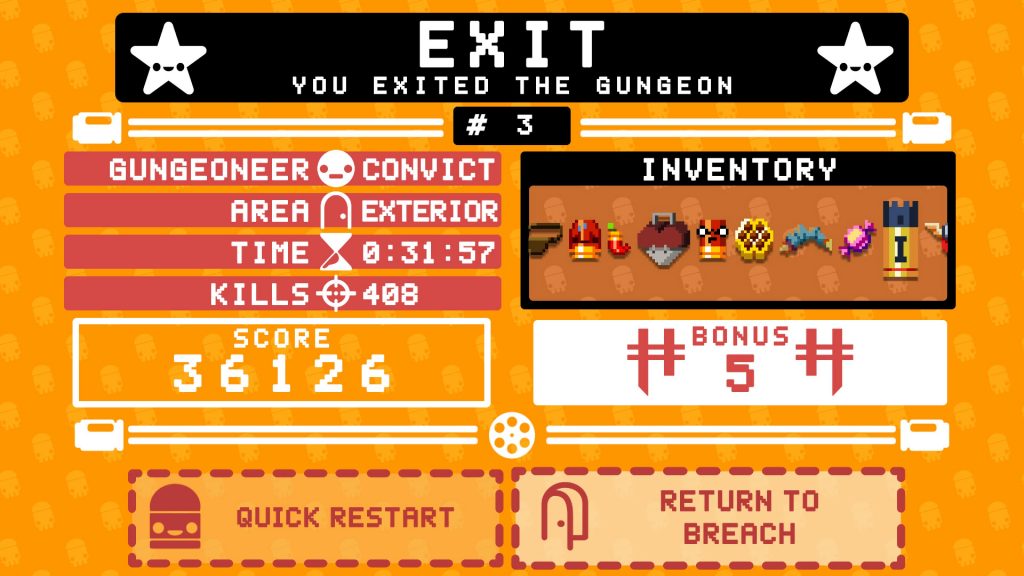 Maybe that’ll be a positive for some and a negative for others but I’ve enjoyed my time with Exit the Gungeon and once I’m done with it I think I’ll be looking to put more time into Enter the Gungeon. Fans of the first might not like the changes here but I feel jumping into a similar but different game will ultimately be more interesting and rewarding.

Exit the Gungeon
7 Overall
Pros
+ Short, intense runs
+ Plenty to unlock
+ Enjoyable bullet dodging mechanic
Cons
- Screen can get very busy
- Can complete it without being that good at it
- Gameplay changes might not please fans
Summary
Exit the Gungeon is an enjoyable, run based rogue-lite. Things can get busy on the screen but runs are short enough and rewards plentiful enough that you'll get a feel for it as you have just one more go.