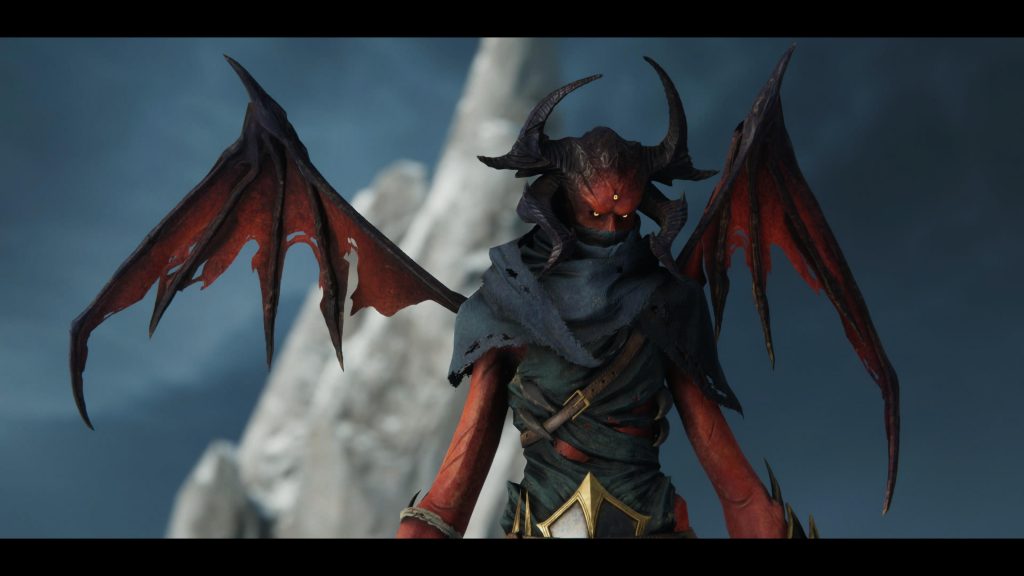 There’s a weird phenomenon that happens sometimes in the indie game scene, where one dev comes up with an idea and almost immediately, another game releases with an uncanny resemblance to that idea. Last November, I reviewed a game called BPM: Bullets Per Minute Which featured the novel concept of marrying a heavy metal soundtrack alongside rhythm action gameplay and rogue-like rules. No issue with this game at all, it got a 7. However, in a haze of recognising the concept from a previously seen trailer at one of the games showcases that year, i later realised that It wasn’t the game that was being advertised. Instead, the game that was shown was Metal Hellsinger, the subject of today’s reviews a game that follows the same mould, albeit far more simply by stripping away the rogue-like elements and going for more of a pure FPS approach.

Retracing some steps from the BPM review. I have thought for a while that the mix of the rhythm action and FPS genre is a good idea. Doom Eternal practically felt like one, with the adaptive soundtrack ramping up with the intensity of the game and the speed of the action lending itself well to Mick Gordon’s face-melting audio. It may seem a bit on the nose for Metal Hellsinger to take a similar aesthetic and soundscape for its own. However, when it was so good, you can hardly blame fledgeling developer The Outsiders for running with it.

In Metal Hellsinger, you play as a demon called Unknown, a demon who has had her voice stolen. In a bid for revenge, Unknown takes to the many visions of hell to take down the demons responsible for the transgression. There is a bit more to the narrative if you care for it, but it is window dressing to the main experience. Your job is to shoot demons while listening to a soundtrack devised with the help of Alissa White-Gluz (Arch Enemy), Serj Tankian (System of a Down), Matt Heafy (ugh… Trivium) and more. 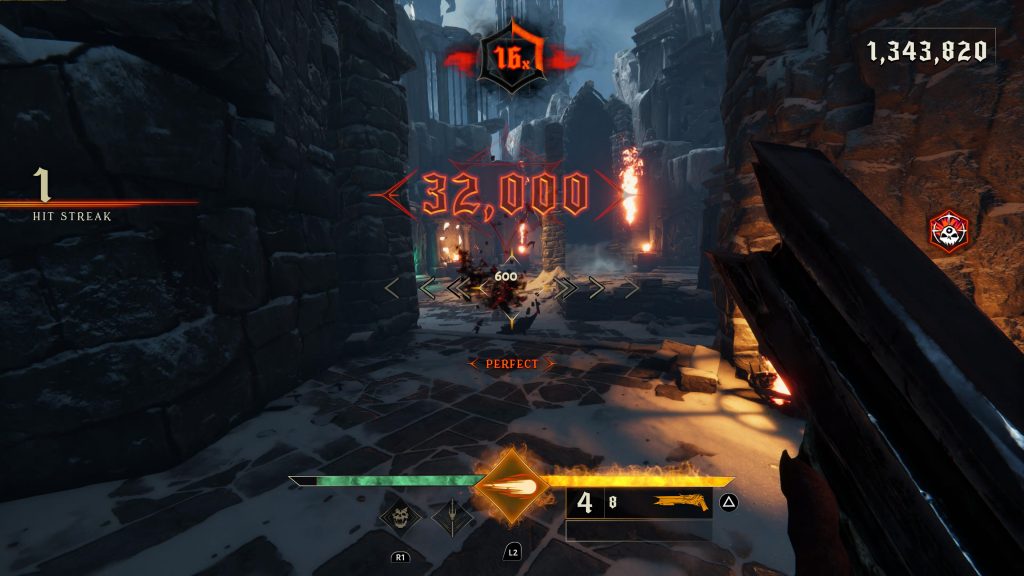 The rhythm of the game is the most important thing to consider and master over the course of the game. No matter which song you are ripping through at the time you must shoot the denizens of hell to the beat of the tune. Shooting dead on the beat providing the most damaging shots, ramping up with each successive hit or whiffing uselessly if the beat line is missed. While doing so, various meters build up in the background. One being your fury meter, which allows Unknown to unleash a devastating attack that differs based on the weapon held. The other being a score multiplier which rewards speed and accuracy on the beat. Do well with this and you get to hear one of the guest vocalists come in over the top of the music to provide the complete soundscape for your listening pleasure.

I must applaud the cohones on The Outsiders for keeping it remarkably simple as beyond this, there is not much else to know. The game is more focussed as a result, letting the player sink in to the music while turning their minimally divided attention to the creatures of hell and ending their existence. Whereas BPM: Bullets Per Minute had the rogue-like stuff and far more rigid control that tasked players with dodging to the beat as well as the shooting. Metal Hellsinger instead lets the soundtrack feel more organic as with player input, it keeps getting better and ramping up with their success. In return, I felt more connected with the music, gaining instant gratification without looking at graphical indicators as I could hear and feel how well I was doing throughout. Not only this, but the desire to get back in and rechallenge a stage was stronger as I wanted to see if I could carry the vocals all the way through a stage, with playspeed being facilitated with simple targets between arenas to allow players to keep their kill combos alive.

Regarding the arenas. Metal Hellsinger is comprised of nine stages, each backed with its own overarching soundtrack and version of hell. The idea of venturing through different versions of life’s bad ending is a cool one. However, this is one of the areas where the game falls a bit flat. Unfortunately, each stage looks the same, with noticeable differences being a slight change in stage dressing and the limited colour palette. Otherwise it is what you would expect immediately from a game that depicts hell, with muddy browns and the orangey red tinge of hellfire permeating throughout the levels. 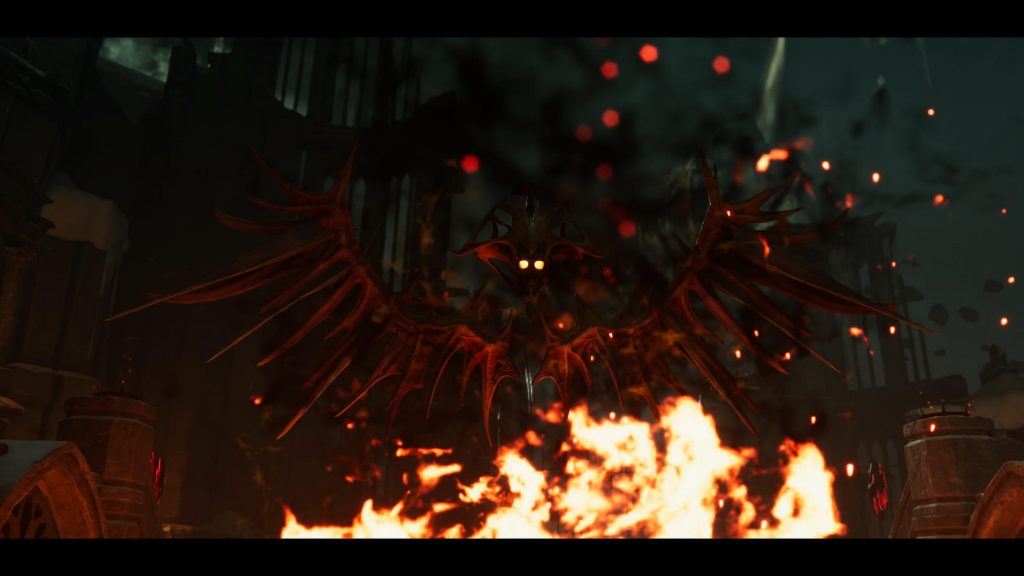 Addressing the balance of variety somewhat, but not entirely are the weapons and bestiary that you will be fighting with and against. Each stage up to the 7th provides you with a new weapon pickup, ranging from the trusty shotgun, all the way up to a demonic scythe like weapon that gets thrown with no reloads required. These are varied, and each provide their own version of the beat as each provides a different firing rate and reload speed. Timing a reload press during the animation to the beat speeds this up and empowers your next shot. Ultimately however, I found myself not using most of the weapons when I had unlocked the last weapon as there was no incentive to slow myself down with a reload animation or less powerful hardware. Which is a far cry from Doom Eternal’s juggling system that ensured that all guns got used at all stages.

The creatures you fight have a similar makeup. Ranging from the braindead zombies, shield carrying brutes to far more imaginative angels that drop homing slug bombs onto the floor that chase you around, keeping you on your toes. While no one enemy is a problem generally, even the ones that can sap the life bar in one hit, it’s when the screen begins to fill with these goons that they become an issue. It’s just a shame that the placement of these guys isn’t as well considered, instead they just appear out of thin air in waves until you have killed enough to proceed. A designed encounter in time with the music would have worked wonders here.

Lastly, the biggest drawback for me was the bosses. Each one bar the last has the same design as the one before, albeit with slightly different speed or effects of attack. While the design of the judges is suitably ‘metal’, their reuse is a bit disappointing and when seeing the last boss of the game, it just made me wish for more. 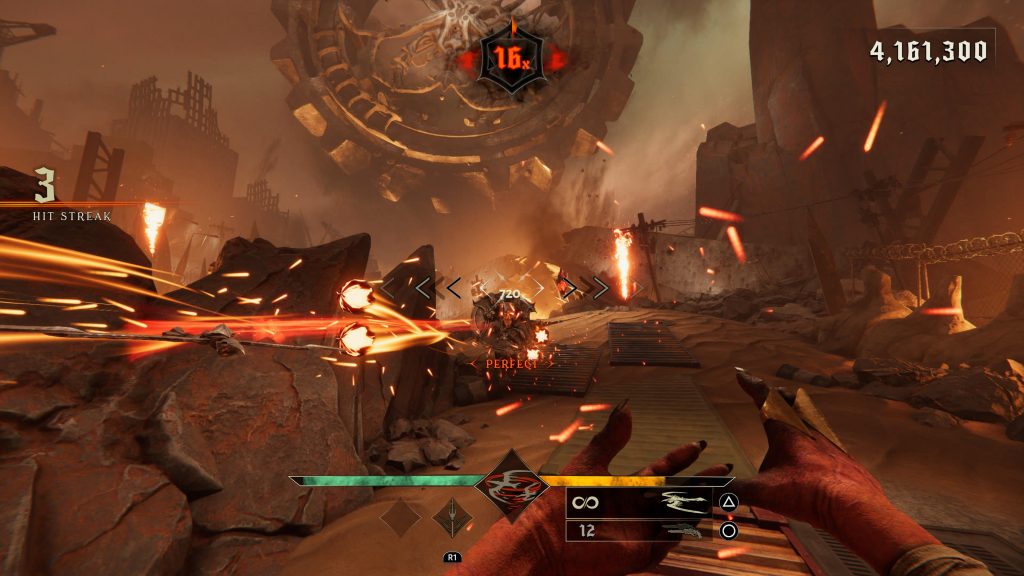 With all that said, I wouldn’t say that the detracting moments that I have outlined are enough to not recommend Metal Hellsinger. It is a well-executed rhythm action title with one of the best soundtracks going. Not only that, but the elements of gunplay, ramping difficulty modes and moreishness of wanting to hit every beat makes it one of the most replayable of recent memory. This should be a no brainer if you love FPS shooters and facemelting riffs.

Metal Hellsinger
8 Overall
Pros
+ Well executed rhythm action game with just enough spinning plates to make it manageable and easily accessible
+ Great soundtrack if you love this sort of thing
+ Moreish gameplay, worthy of a replay or three
+ Short, concise, and impactful, just like any good album should be
Cons
- Not a huge amount of variety to be found
- Some weapons get superseded by better alternatives too quickly
- The boss fights feel like a bit of a cop-out.
Summary
A solid, well executed rhythm action shooter that keeps things simple to provide a fun and replayable experience. Metal Hellsinger fires on most cylinders, with only an issue of variety scuppering the overall package. Come in for the blistering soundtrack from some of Metal’s greats. Stay for the moreish gameplay a heavenly combo, despite the hellish subject matter.