Hardspace: Shipbreaker is the latest title from Vancouver natives Blackbird Interactive and it’s genuinely got a different concept to really any game we’ve reviewed or played.  It’s pretty much as the name suggests.  You’re a spaceship salvager and you float around in space cutting up giant space ships before flinging their parts into the correct receptacle.  It’s essentially sorting out your recycling at home but on a much larger scale.

Set in the Earth’s orbit, you play as “Shipbreaker #9346-52” who has to work off a crippling $1.2 billion debt for the Lynx Corporation.  You do this by breaking up large spaceships in what is essentially a zero(ish) gravity wreckers’ yard where you can float around your current target ship and go to work on it, bit by bit, until every scrap of it is safely deposited. 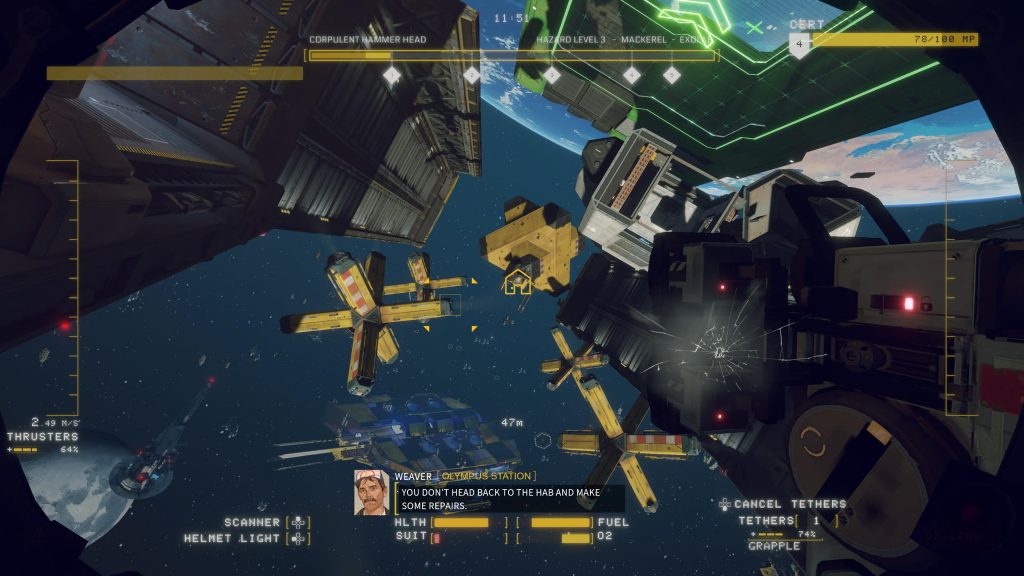 The controls are initially a bit of a handful.  Aside from your personal thruster controls that let you navigate space, you can also float directly up and down (relatively speaking) and rotate clockwise and anti-clockwise (mapped to L3 and R3).  You’ll need to get a grip on the basics if you want to start effectively moving around but you’ll get it soon enough.  For us, the controls were initially a nightmare but soon became very intuitive.

You’ll also have to quickly master your tools which start out as just a grapple which is used to either manually move smaller chunks of ship (along with a handy shove move to push them forwards) or can be used to attach to larger things in order to pull you forward and save a little fuel.  You also have your cutter which has two modes.  The first is basically a pointer.  Aim it at something and it’ll destroy it (provided that your cutter is strong enough for that material).  Or you can use the alternate mode which will provide a horizontal or vertical cut for when you need to separate attached items. 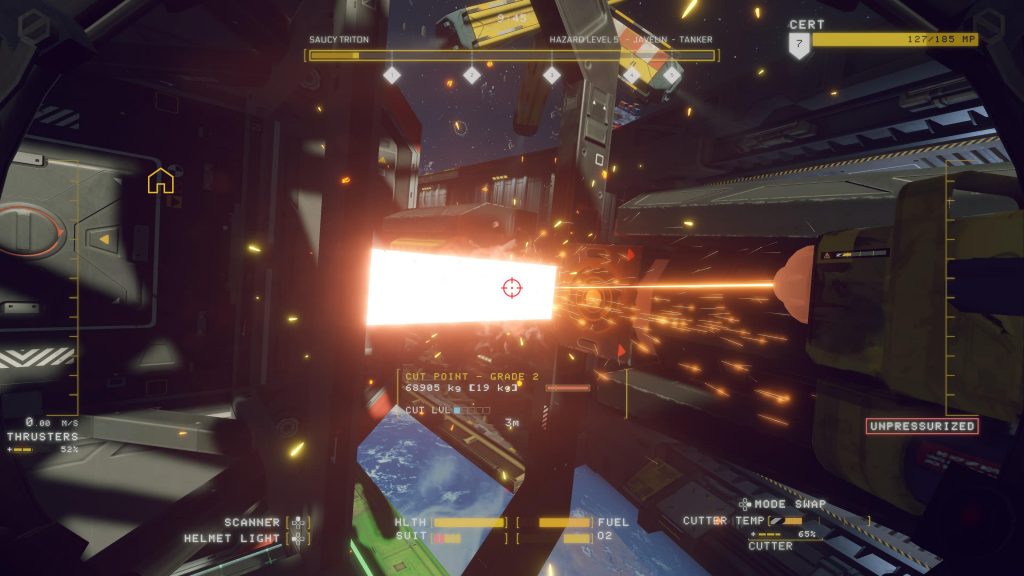 Once you’ve got the controls figured out, then it’s just a case of figuring out the construction of each ship and how they generally hold together.  That process is really you just becoming skilled at your job and that brings home something, this really is just like any of those job simulator games that we can never be bothered to review.  The setting may be more interesting and there’s a plot here but essentially that’s what you are doing:  getting better.

Each ship will have its main core structure with some degree of plating for the hull.  There will be a cockpit, thrusters, an energy source and various other components for you to dismantle.  Most of the dismantling can be done by destroying ‘cut points’ which are yellow joints that hold things together.  Doing that will break the ship down into more manageable chunks and grant access to areas that you couldn’t previously get to.  There’s something of a puzzle element to it but really it’s a bit more straightforward than that.  It’s more like breaking down a lettuce than solving a Rubik’s Cube (feel free to pick your own terrible example though). 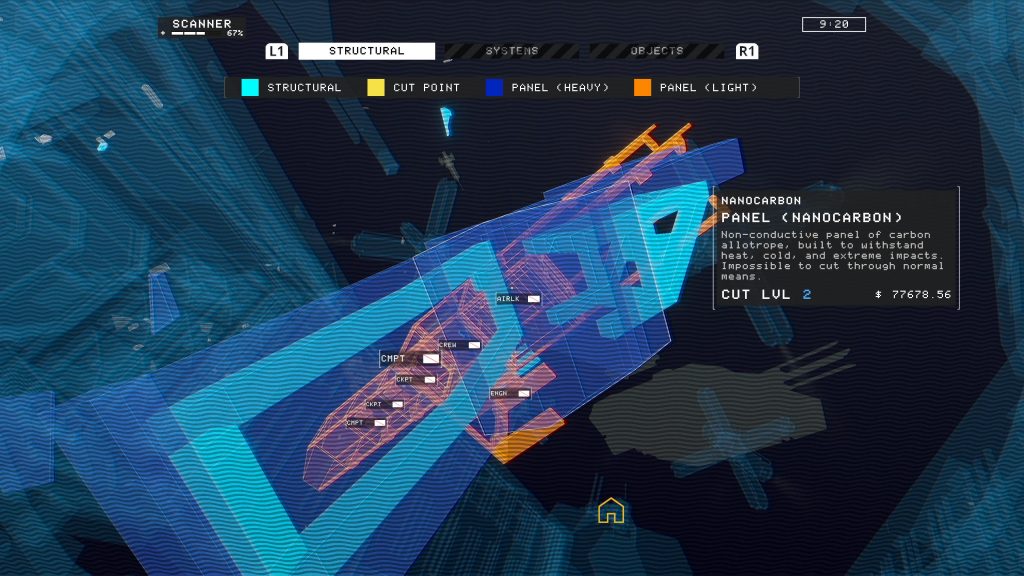 Each piece of the ship needs to go in the right receptacle.  The Furnace takes care of metal and the Processor is good for electronics.  So, for example, you might have a big aluminium plate taken straight from the hull but it might contain door controls.  The former goes to the Furnace and the latter to the Processor.  From your starting position (outside your ‘Hab’) there is one of each one both the left and right side of the yard.  Below is the ‘Barge’ and this is where you deposit any valuable items from certain fixtures and fittings to the nuclear core of a ship.

The process of taking apart a ship does take time.  Although your shifts are limited to 15 minutes and you’ll no doubt run out of oxygen before then, it’ll take multiple shifts to clear a whole ship.  Although your kit can be upgraded along the way, the ships do get more complicated later on, so you can still expect each ship to take up to an hour.  That means that the progress in this game is glacial and that, combined with the general slow, floaty movement of your breaker, means that the game can feel slow.  As such this ends up being one of those games where you have to relax into it.  A game that is maybe good for playing while catching up with podcasts. 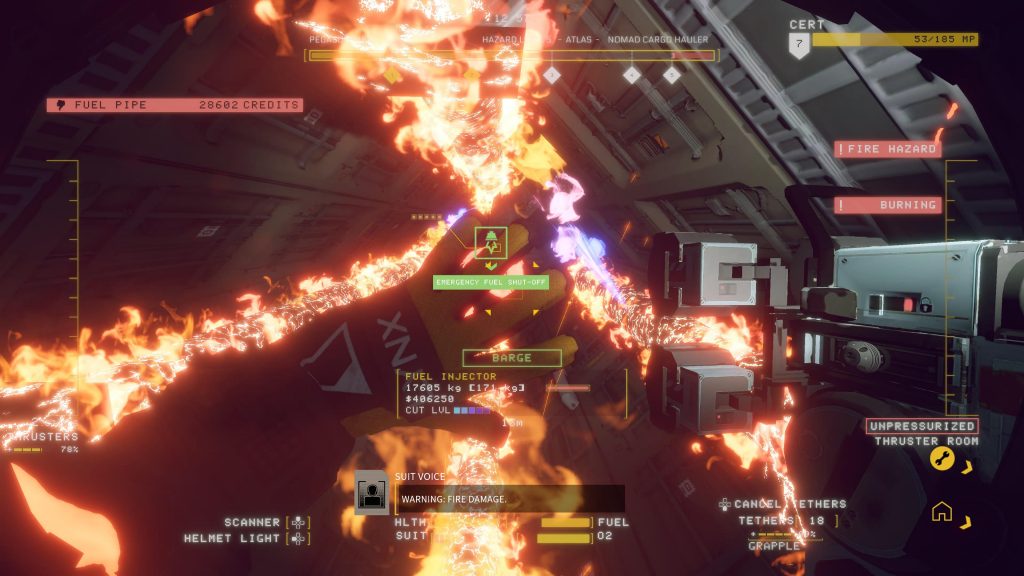 That said, Shipbreaker is actually very enjoyable.  There’s something about dislodging a large chunk of ship, stripping it of its electricals and sending into the right receptacle is oddly satisfying.  Especially after a couple of ships when you get your tethers that allow you to fire and forget a self-retracting tether that pulls objects to target objects.  We had a really big piece of hull annoyingly getting pulled, incorrectly, into the furnace and used multiple tethers to correct it and it felt like a massive win when we finally got credited with the salvage.

Each ship has five salvage targets assigned to it.   As you deposit your materials, a bar climbs up from left to right.  Entirely based on scrap value, the more you deposit, the higher the bar climbs.  As you hit milestones, you’ll earn MP (which is used to rank you up, giving you access to new upgrades and pushing the story on) and LT (Lynx Tokens) that are currency that you can spend on available upgrades.  Upgrades tend to focus on the range, power and durability of your gear but they’re all welcome, especially if they stop you needing to go back to the Hab as often. 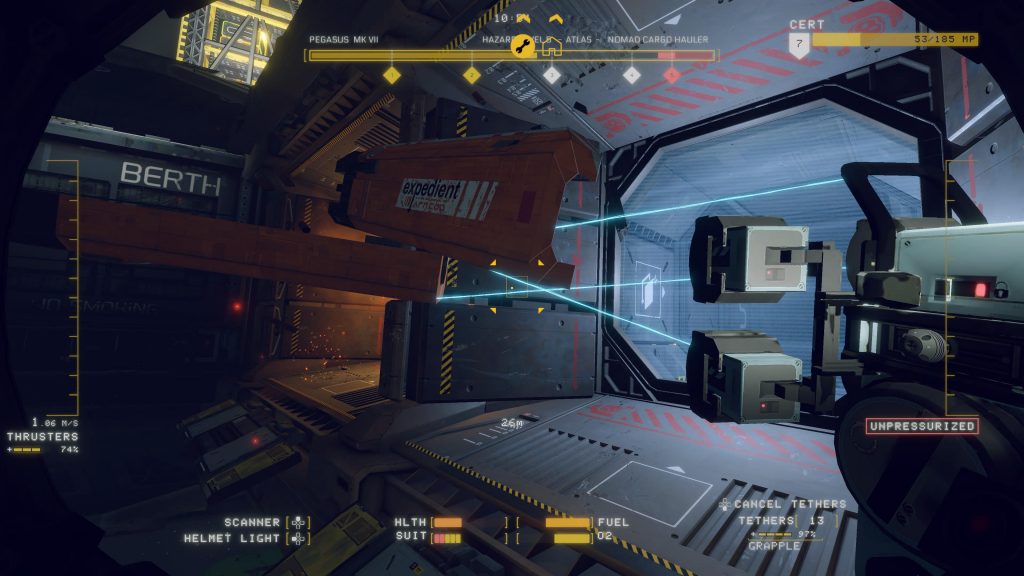 As with everything though, this process is slow.  This includes how new gameplay mechanics and ship complications are added.  Initially, breaking up ships is pretty easy but later on you’ll be dealing with nuclear cores that have to be disposed of in a short amount of time (or else they’ll damage the ship hugely, which will impact on your salvage values), flammable cut points and explosive decompression.  These do help make things interesting but they take a while to appear.

What sets this game apart from the various work sims out there is the presentation.  The space setting works nicely and gives the game a decent AA feel.  The visuals are sharp and do a good job of helping you assess the ships before you tear them down.  That said, sometimes even the PS5 struggles for performance.  If you get caught up in a decompression event, you might see the frame rate drop down to EDF2017 levels.  That’s because of all the independently floating shards of ship and physics computations going on but it’s disappointing to see.  That said, for 99% of the time the game holds a solid 30FPS (if set to ‘High Quality’ where as the other display mode unlocks frame rate but is a lot more variable).  The visuals aren’t mind-blowing, which is a shame as space-based games can look great, but they’re good enough and the setting is nice. 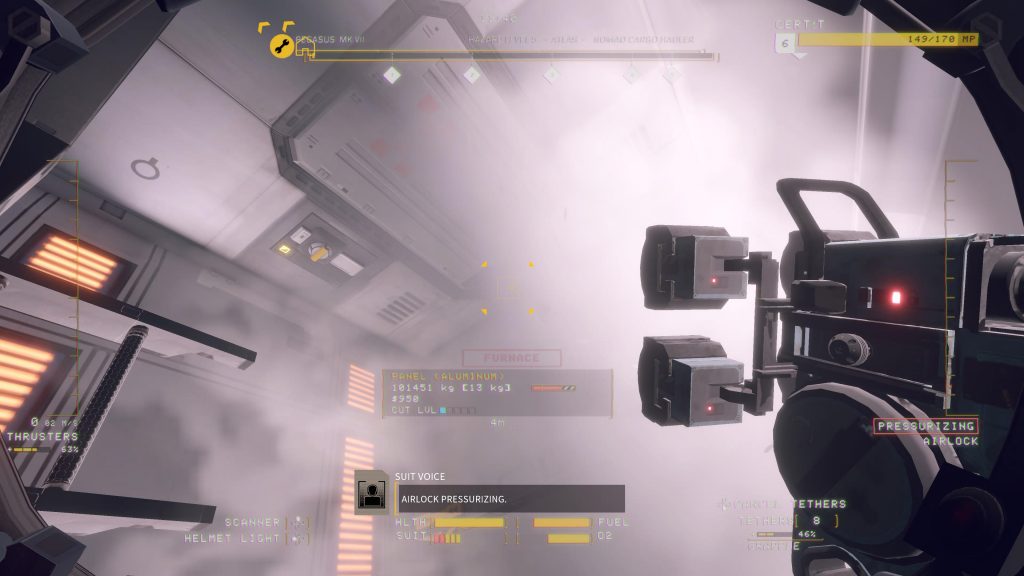 The main draw here though is the music.  Shipbreaker steals the whole cowboys in space vibe from the old Firefly TV show.  Floating around in space while listening to moody, twangy country music is supremely enjoyable.  While the story is delivered via avatars and text, it is backed up with full voice-acting.  To be honest though, as the game went on we kind of lost interest in the story mainly because it’s so slow to unfold but the concept behind it is sound enough.

For us, as reviewers, this type of game is a nightmare.  We’ve always got three or four games waiting to be played and reviewed and so losing dozens of hours to a game like this really affects our ability to turn out our reviews and that can impact our enjoyment a little but, honestly, Shipbreaker is just so enjoyable and addictive, we can’t stop playing it.  And what really excites us is that this is genuinely a new concept in terms of the core gameplay mechanics.  With its relaxing gameplay, satisfying upgrade system and chilled atmosphere (semi-intended), Shipbreaker is a game that’s arguably better than the sum of its parts but that won’t matter when you’re out there in the yard.

Hardspace Shipbreaker
8 Overall
Pros
+ Very relaxing gameplay
+ Satisfying and addictive
+ Upgrades are welcome
+ Story evolves as you go along
Cons
- Glacial slow pace
- Can be repetitive
- Some visual performance issues
Summary
Hardspace Shipbuilder is a glorified recycling simulator with okay visuals, repetitive gameplay and a bleak setting but that doesn't stop it being our new go to chill out game. Its relaxing, compelling, satisfying and worryingly addictive.